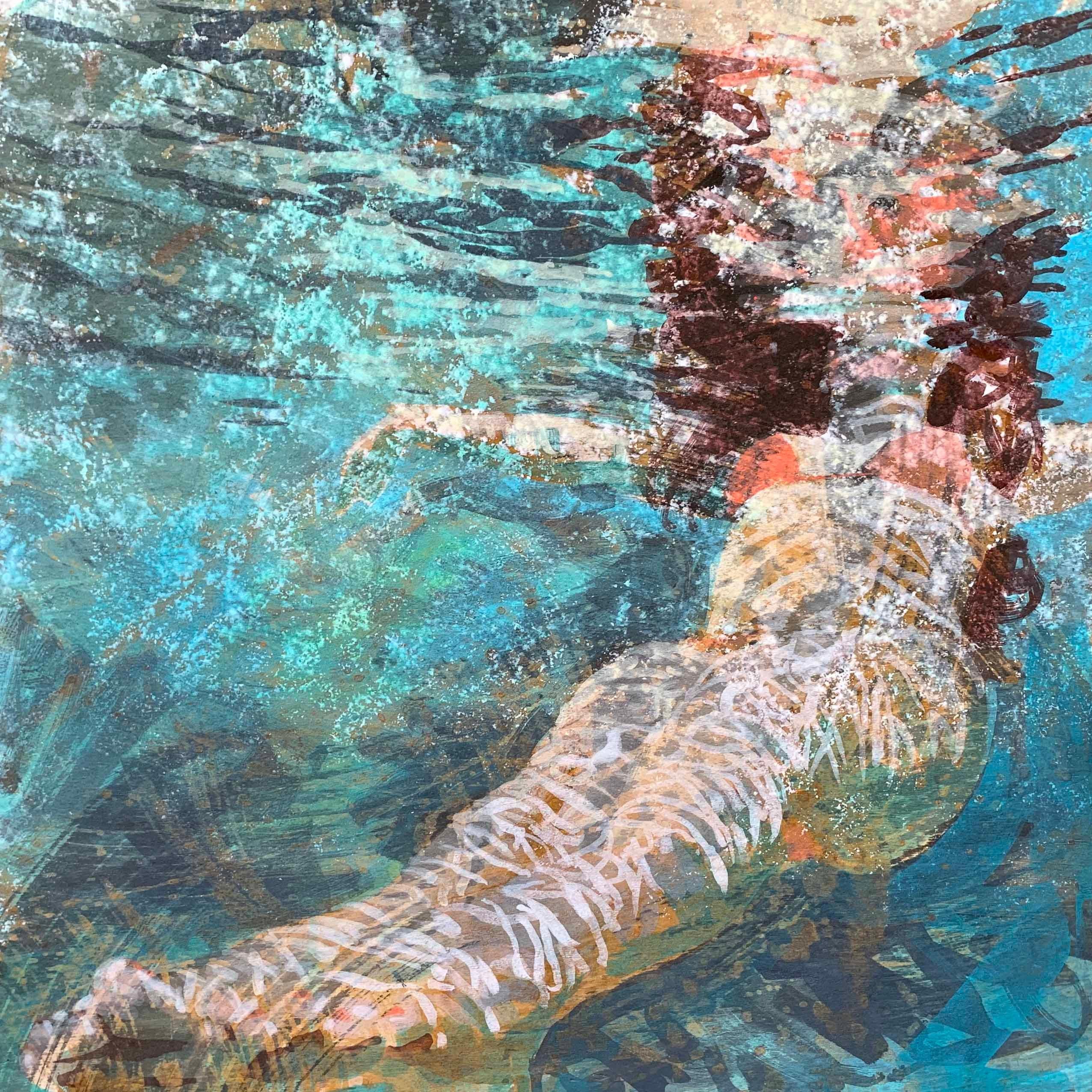 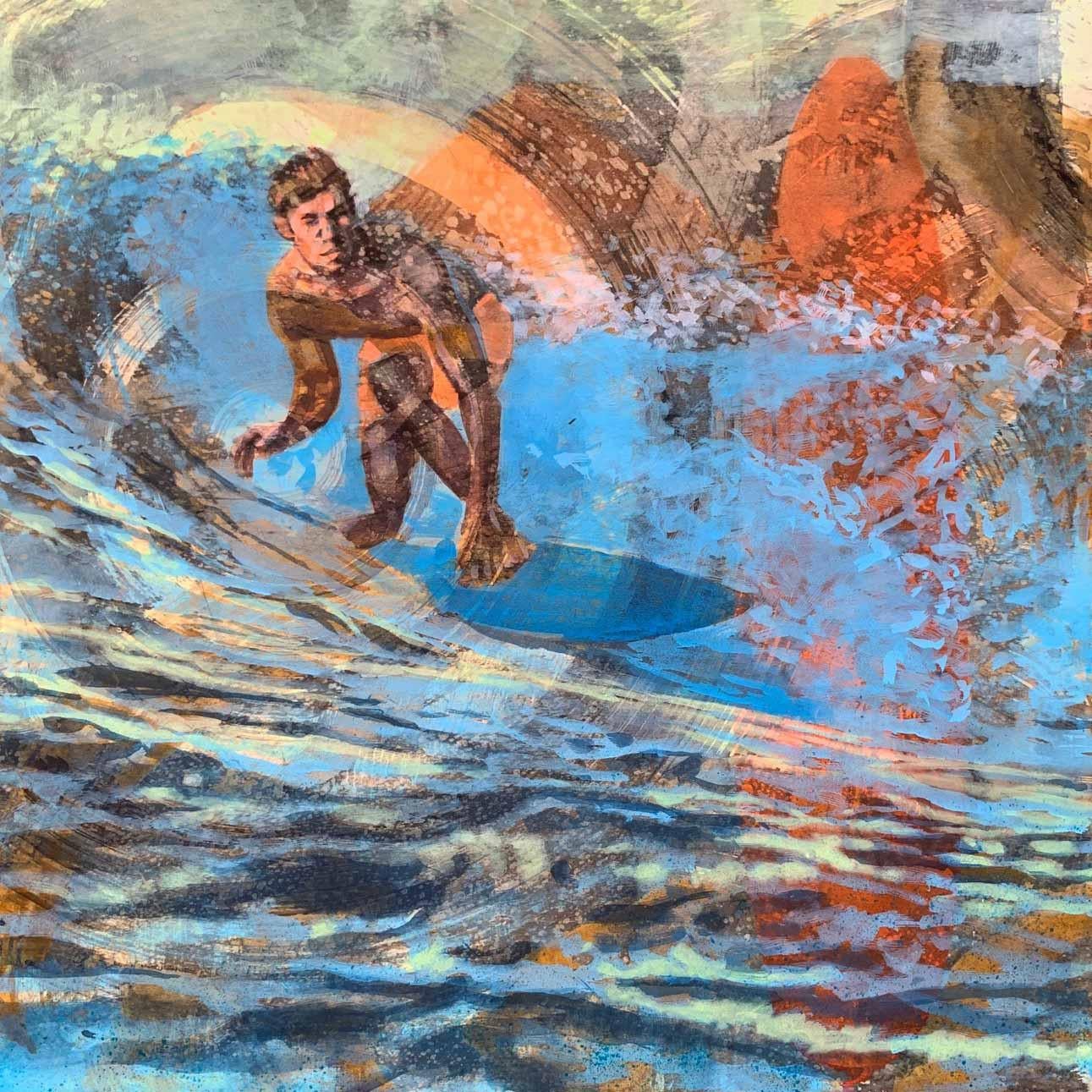 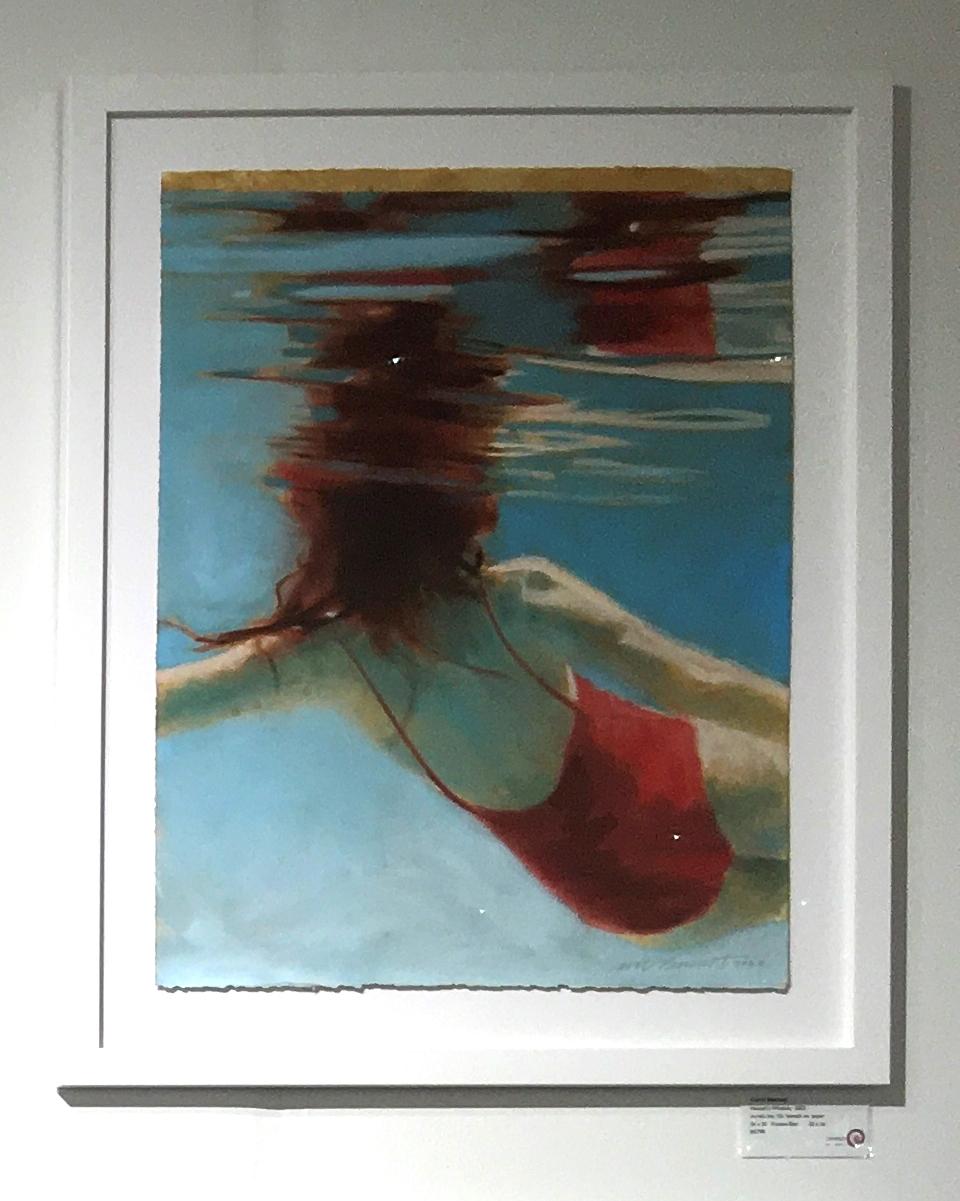 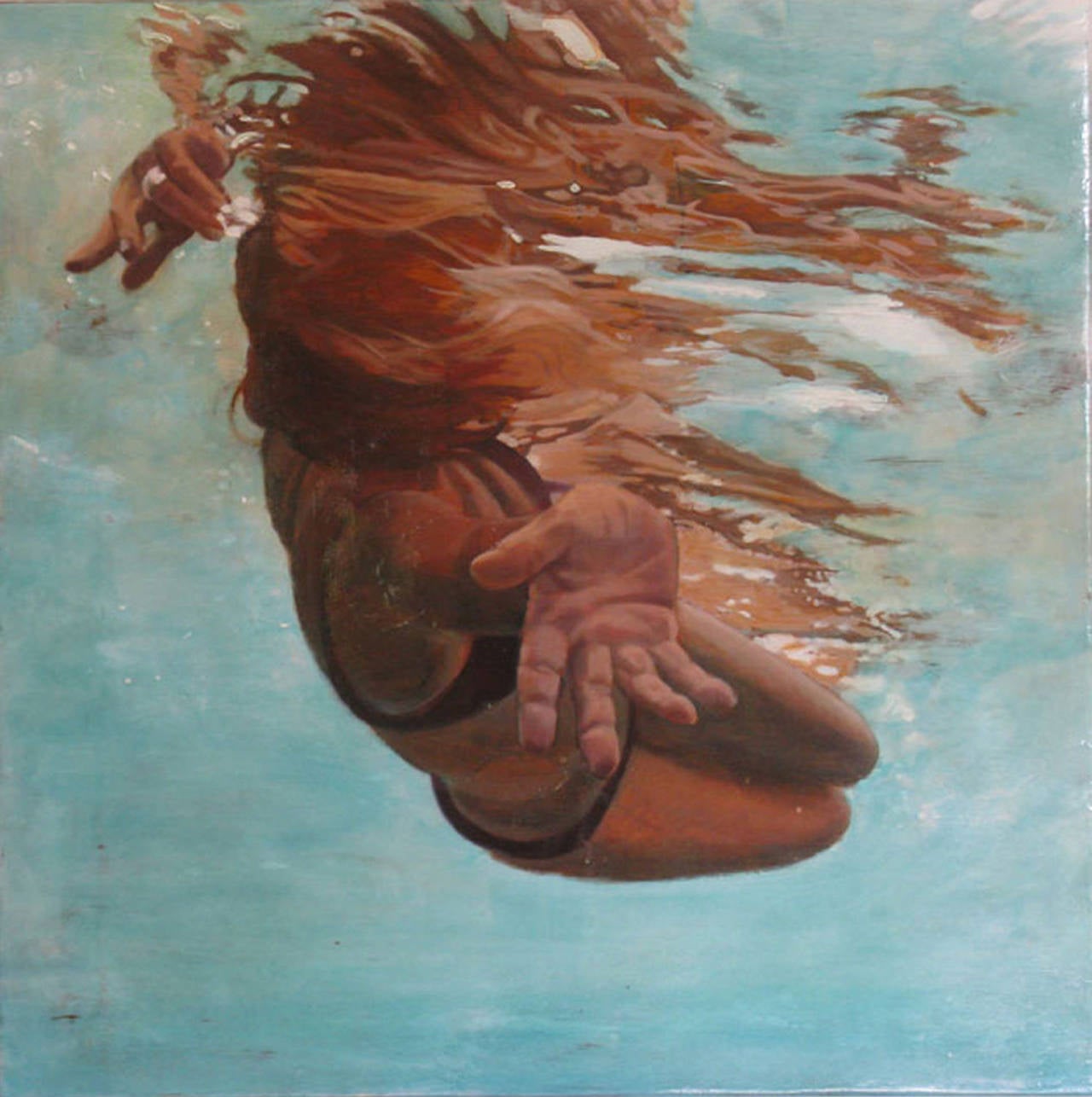 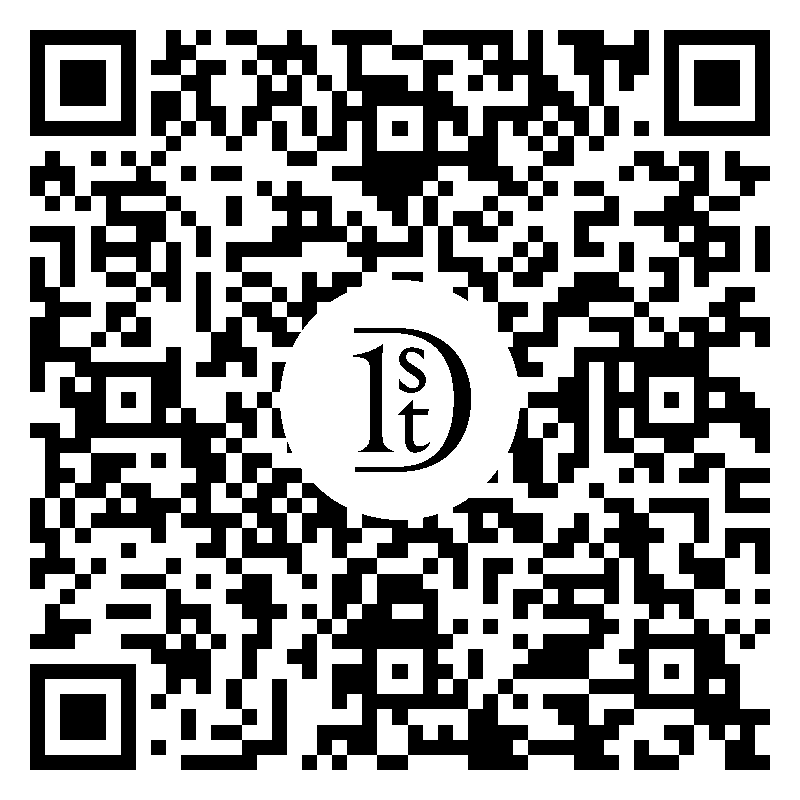 Manganese is a figurative swimmer artwork by Hawaii artist Carol Bennett. It is acrylic, oil and varnish on wood panel. Artwork is 44 x 44. It is a great artwork for a beach house or a space looking for meditative, calming artwork. Carol Bennett spends all of her time surrounded by water, and a great deal within it. Her work is a meditative journey through both the water and through life. She is intrigued by how life continues to flow and change, being both in the moment and timeless. The viewer will experience being in a state “flow” – where the currents of the ocean suspend life and self, and the unexpected floats to the surface. Carol's work has been featured in many solo and group exhibits throughout California, New York, and Hawaii including a 2007 solo show at the First Hawaiian Center at the Contemporary Museum of Art (Honolulu) and a 2018 solo show, as well as a group show "Making Waves" exhibit at the Honolulu Museum of Art. Her work was seen alongside April Gornik, Agnes Martin, Kiki Smith, and Pat Steir (to name a few) . She has recently completed a commissioned 8' x 48' glass canopy for the Hawaii State Art Museum, Sculpture Garden. She has been featured in Hamptons Cottages & Gardens, Ocean Home Magazine and the New York Times. Carol's artwork has also been featured in Designer Showhouses in Westchester NY and the Hamptons, and is part of public and private collections around the world. 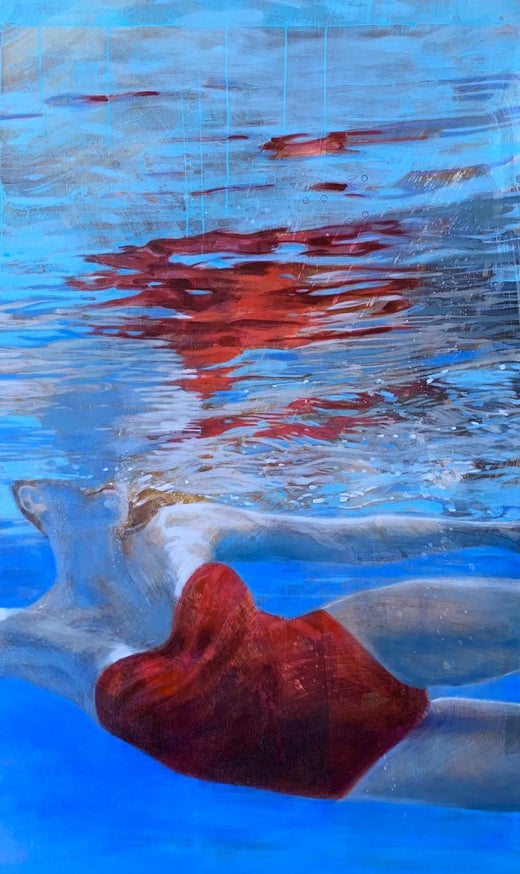 Splitting her time between Hawaii and California, Carol Bennett (b. 1954) has mastered the art of capturing movement in her enigmatic paintings.

While Bennett has garnered praise for the meditative sensibility that characterizes her paintings as well as a bold use of bright colors, some of her works are more famous than others. In fact, her “Women in Water” series is perhaps her most well-known collection. As its name implies, the series features women swimming. They’re captured from an underwater perspective, and their faces are either out of frame entirely or obscured by the sun-dappled surface of the water, which serves as a showcase for Bennett’s portrayal of the qualities of sunlight. The upper half of each painting is flecked with the blues and greens of the ocean as well as whatever color the subject’s bathing suit happens to be.

The series originated with Bennett sketching swimmers at an athletic club’s pool in Los Angeles, but as her process evolved, her husband, Wayne Zebzda, began to film the artist on her daily swim on Kauai. The resultant images inform her work, but she doesn’t consider these works to be depictions of her in particular.

“I swim seven days a week, and while I don’t consider them self-portraits, I am the swimmer in the paintings,” Bennett has said.

Given her constant proximity to the ocean, it’s no surprise that Bennett is inspired by water’s glassy properties, citing its presence as both “a mirror and then a window.” Her radiant paintings, whether she’s working with oil and shellac on paper or wood panels, allow her to explore sunlight in such a rich and provocative way that it’s as if she endeavors to suspend rays of light above the water’s surface, making them seem as tangible and physical as the swimmers themselves.

Aside from her works that hang on the walls of galleries and museums around the world, Bennett has also painted murals and even a 48-foot photovoltaic solar canopy for the Hawaii State Art Museum Sculpture Garden.

1stDibs Buyer Protection Guaranteed
If your item arrives not as described, we’ll work with you and the seller to make it right. Learn More
About the Seller
5.0
Located in Riverdale, NY
Vetted Seller
These experienced sellers undergo a comprehensive evaluation by our team of in-house experts.
Established in 2008
1stDibs seller since 2015
106 sales on 1stDibs
Typical response time: <1 hour
More From This SellerView All
People Also Browsed
You May Also Like