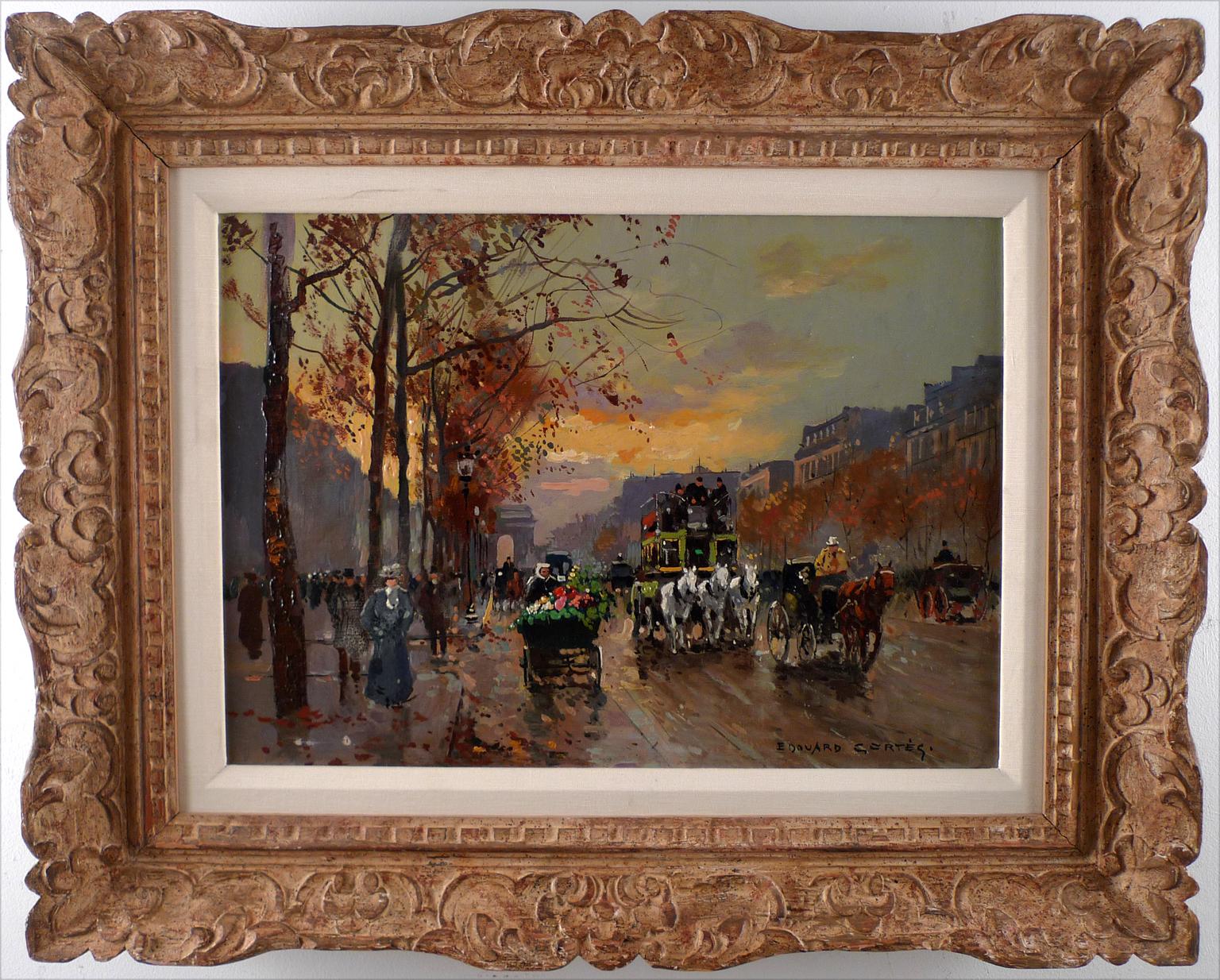 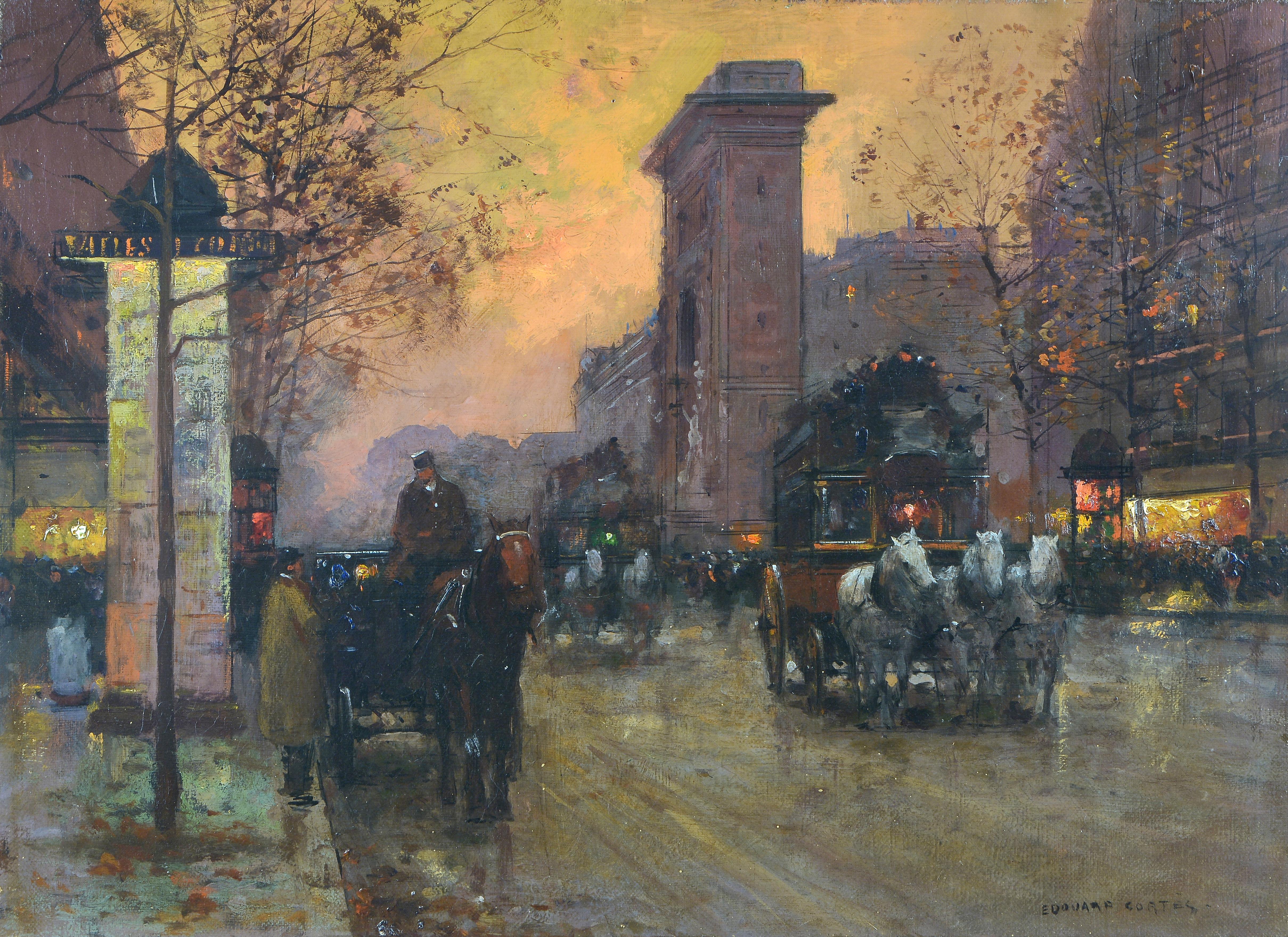 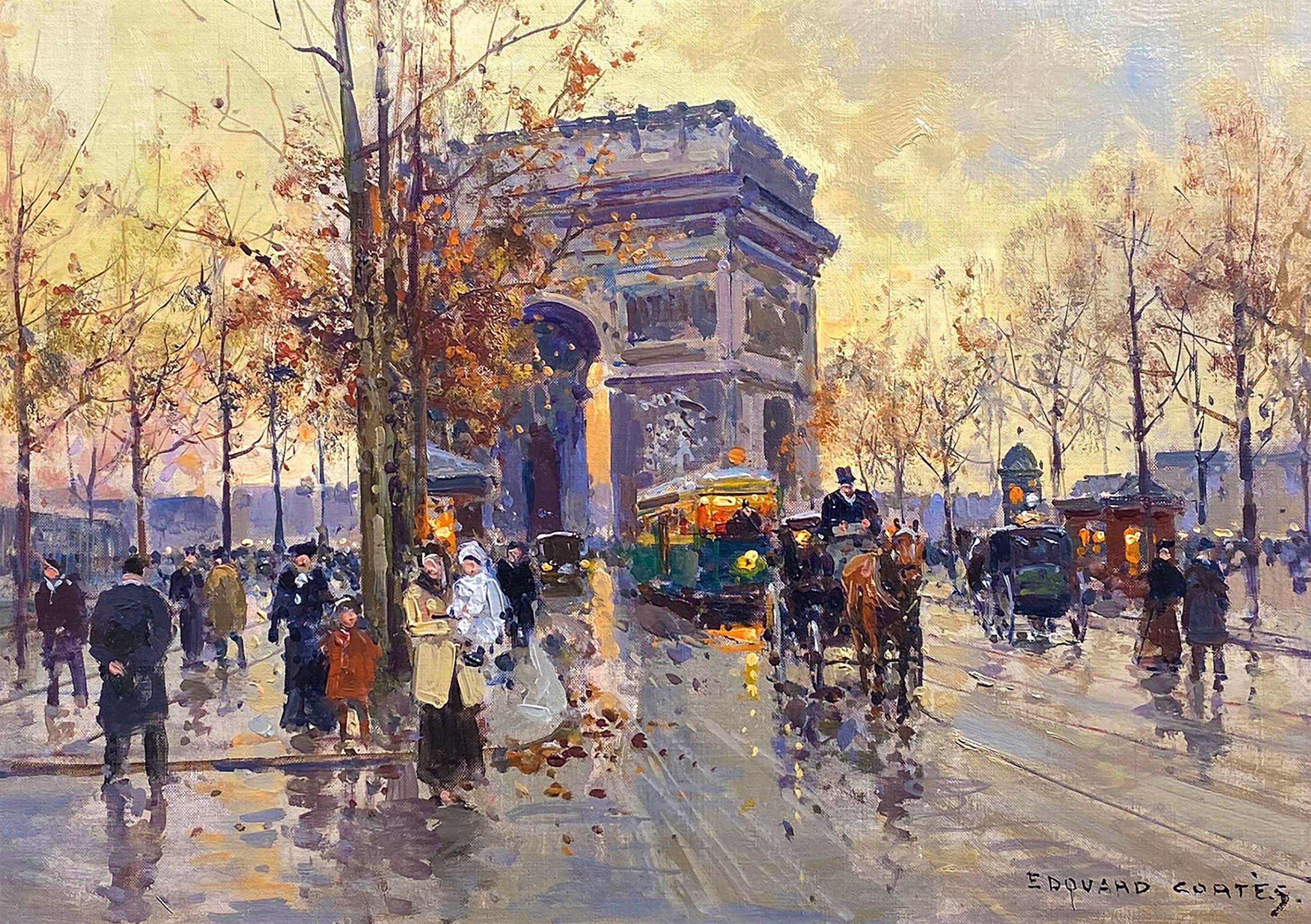 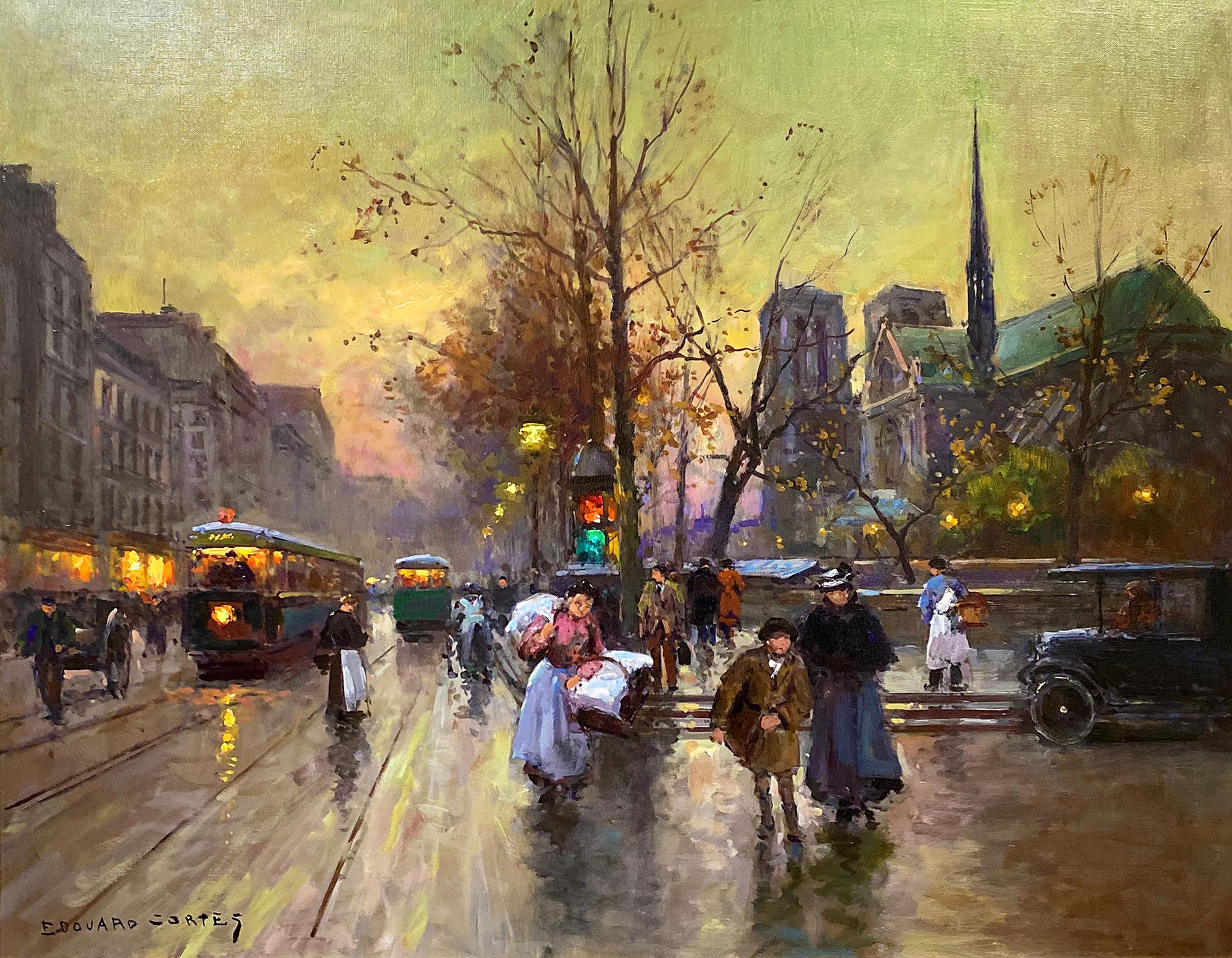 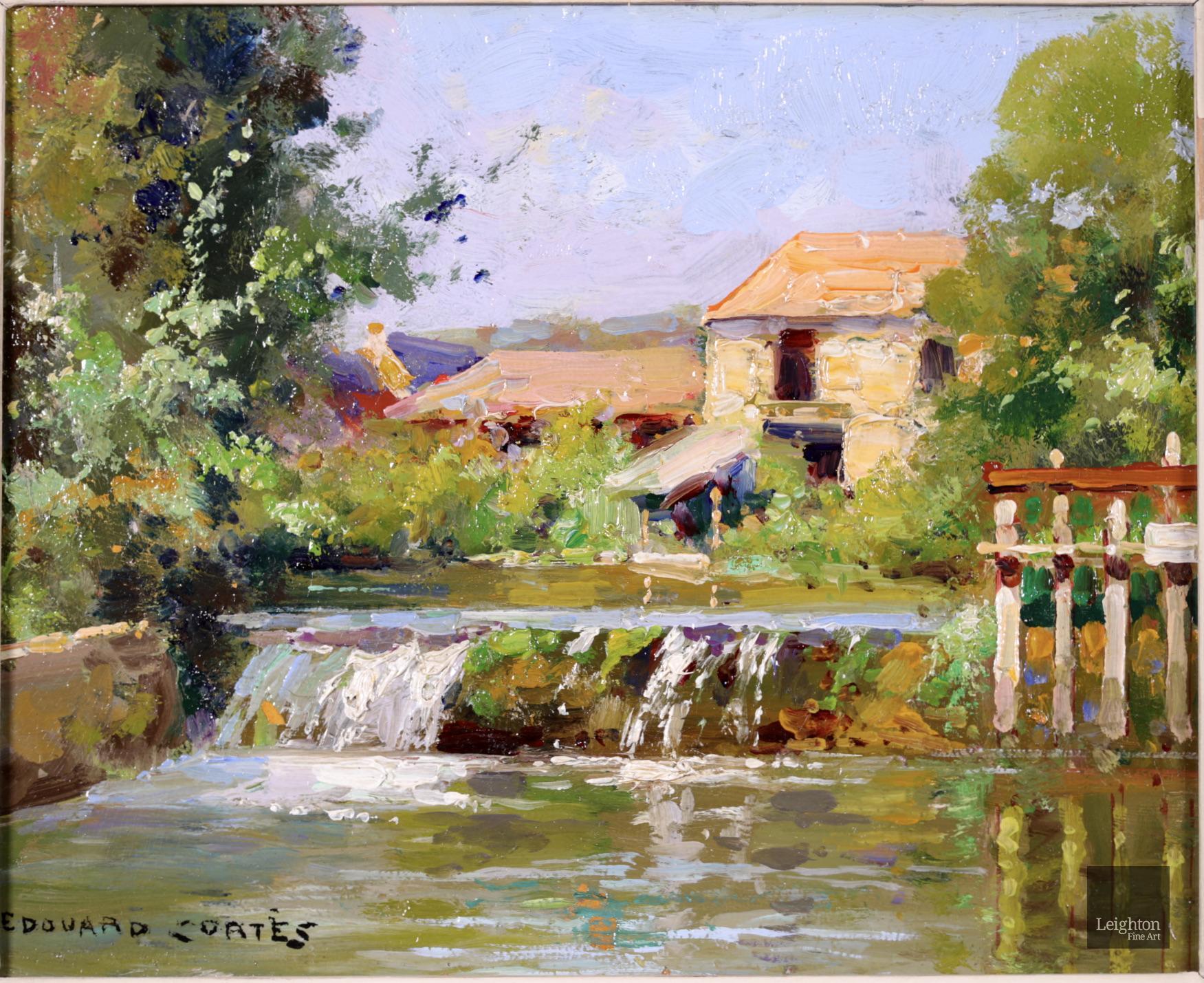 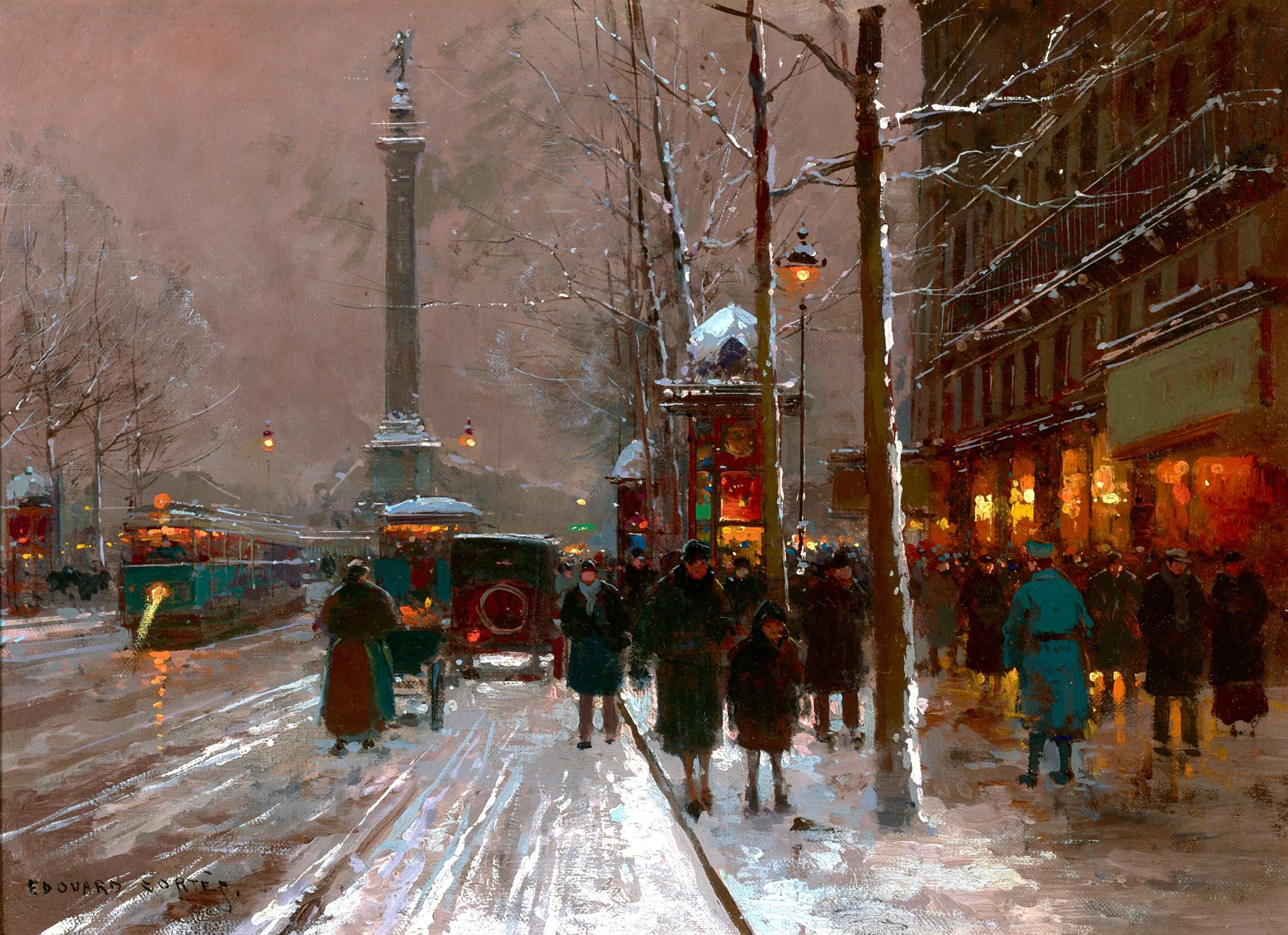 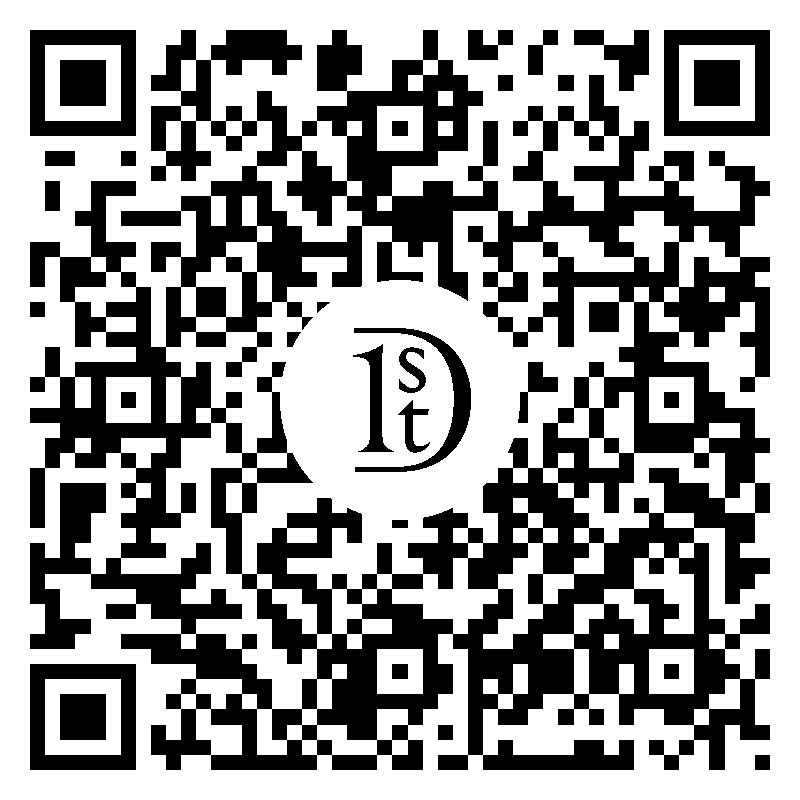 EDOUARD LÉON CORTÈS French 1882 - 1969 RUE DE LA REPUBLIQUE signed "Edouard Cortès" (lower right) oil on canvas 19-3/4 X 25-1/2 inches (50 X 64.5 cm.) framed: 27-3/4 X 33-3/8 (70 X 84.5 cm.) PROVENANCE Private Collector, Madrid An elegant night view of the Parisian Republic Square, with amazing light effects that catch us. This work executed based on brushstrokes of long and safe strokes that make the forms vibrate with vivid color. Parisian nightlife is trapped in this corner of Paris. The monumental sculpture that symbolizes freedom and that presides over the square serves as a reference behind the tram between a light chiaroscuro. Meanwhile, the effervecent and lively life of the cafes that surround it vibrate strongly with its bright lights. Èdouard León Cortés (1882–1969) was a French post-impressionist artist of French and Spanish ancestry. He is known as "Le Poète Parisien de la Peinture" or "the Parisian Poet of Painting" because of his diverse Paris cityscapes in a variety of weather and night settings. Cortes was born on August 6, 1882, in Lagny-sur-Marne, about twenty miles east of Paris. His father, Antonio Cortés, had been a painter for the Spanish Royal Court. In 1914 Cortès married Fernande Joyeuse, with whom he had a daughter, Jacqueline Simone, in 1916. Although Cortès was a pacifist, when war came close to his native village he was compelled to enlist in a French Infantry Regiment at the age of 32. Sent to the front lines, Cortès was wounded by a bayonet, evacuated to a military hospital, and awarded the Croix de Guerre. After recovery he was reassigned to use his artistic talent to sketch enemy positions. Later in life his convictions led him to refuse the Légion d'Honneur from the French Government. In 1919 he was demobilized. His wife died in 1918, and the following year he married his sister-in-law, Lucienne Joyeuse. Cortès lived a simple life amid a close circle of friends. He died on November 26, 1969, in Lagny, and has a street named in his honor. Painting History At the age of 17, Edouard began his studies at the École des Beaux-Arts in Paris. His first exhibition in 1901 brought him immediate recognition. Cortès stressed his independence. Once, in responding to a journalist who asked if he was a student of Luigi Loir, he replied in pun: "Non, seul élève de moi-même." ("No, a student of myself only.") His works were first exhibited in North America in 1945 and he subsequently achieved even greater success. In his last year of life he was awarded the prestigious Prix Antoine-Quinson from the Salon de Vincennes. 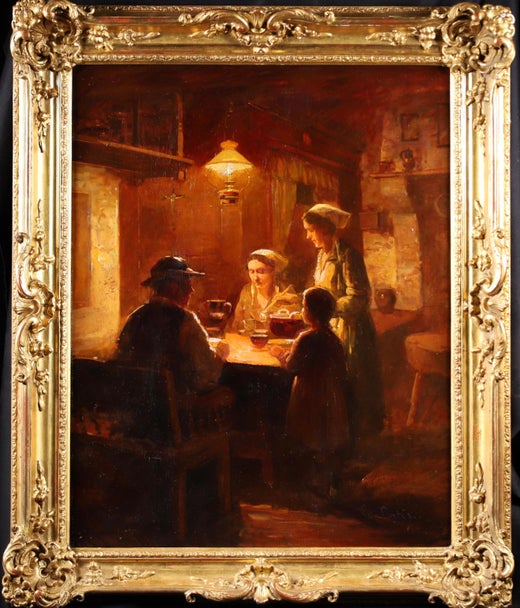 Establishing a name for himself early on in his long career, Cortès first exhibited a painting he called La Labour at the Société des Artistes Français when he was still in his late teens. He found success among art critics as well as the public and earned renown in France. Cortès went on to study at École des Beaux-Arts.

As World War I gained steam, Cortès willingly joined the French military effort even though he was a pacifist. The artist spent time sketching enemy positions on the front lines, and this may have deepened his anti-war resolve. When he was able to return to his easel, Cortès desired solely to paint peaceful scenes of France’s capital city.

Later, during World War II, Cortès and his family spent time in Normandy to escape the horrors of the conflict. When asked about his depictions of horse-drawn carriages in the streets of Paris as well as outdated fashions — dresses and other garments that bore the hallmarks of pre-1930s fashion design, for example — he cited a fantasy he had about being able to “stop time” so that the Second World War wouldn’t have taken place.

A humble man, Cortès refused interviews and preferred anonymity. He remarked that his oil paintings, pastels and watercolors should speak for themselves. Cortès was prolific — he painted the streets of Paris and its well-known landmarks as well as majestic landscapes, interiors, boats and scenes that unfolded at Parisian harbors. Ten years after his death in 1969, the city of Lagny — where Cortès had spent most of his life — named a street in his honor.

About the Seller
5.0
Located in Madrid, Spain
Vetted Seller
These experienced sellers undergo a comprehensive evaluation by our team of in-house experts.
Established in 1977
1stDibs seller since 2019
16 sales on 1stDibs
Typical response time: 6 hours
More From This Seller

Porte Saint Denis, le soir
By Édouard Leon Cortès
Located in Recoleta, CABA
Celebrated as the "Parisian Poet of Painting," Edouard Léon Cortès was a master at capturing the timeless energy and beauty of the City of Lights. This winter scene of the legendary ...
Category

$11,261
Place de la Bastille, Winter
By Édouard Leon Cortès
Located in New Orleans, LA
Celebrated as the "Parisian Poet of Painting," Edouard Léon Cortès was a master at capturing the timeless energy and beauty of the City of Lights, and this winter scene of the legend...
Category