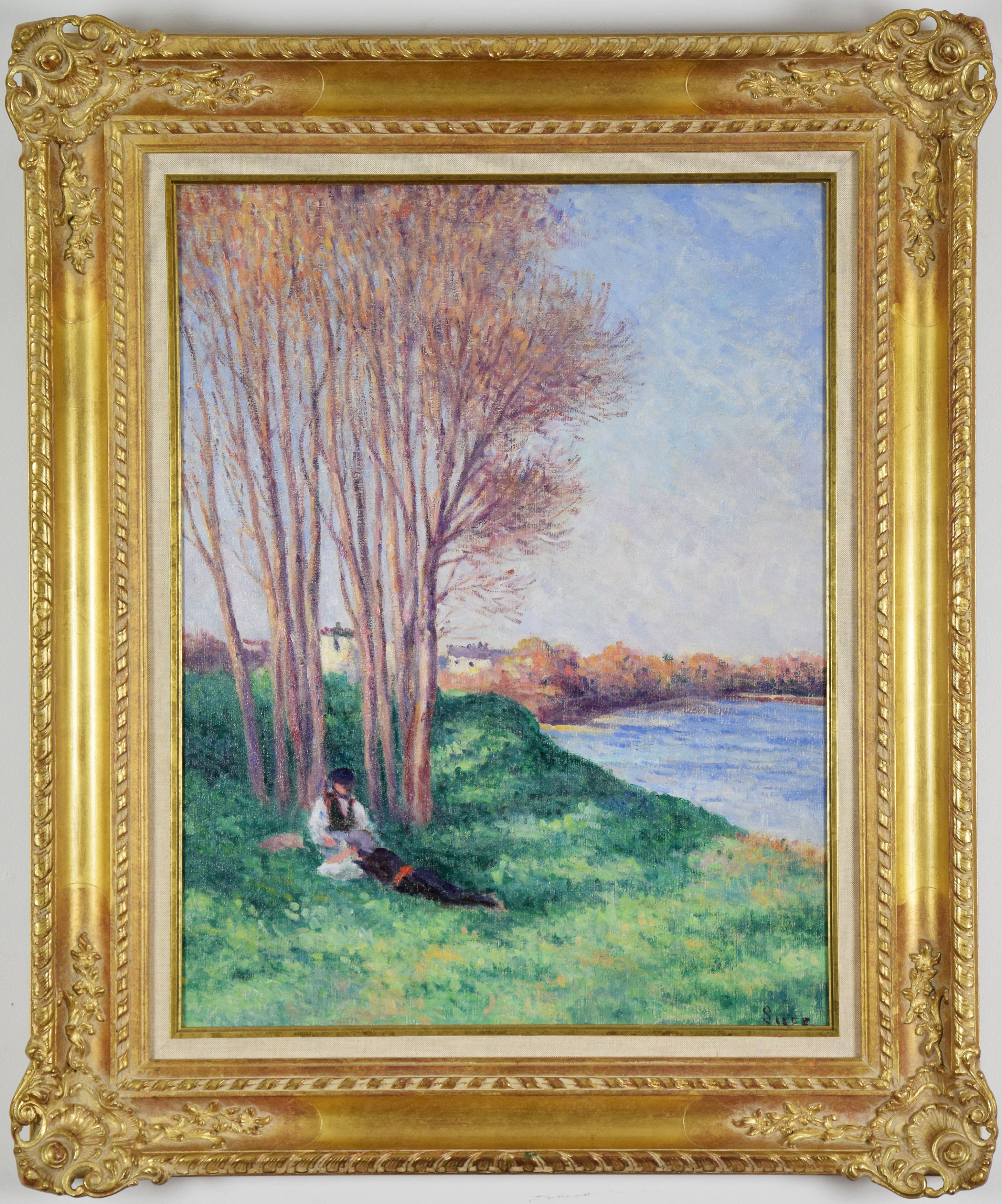 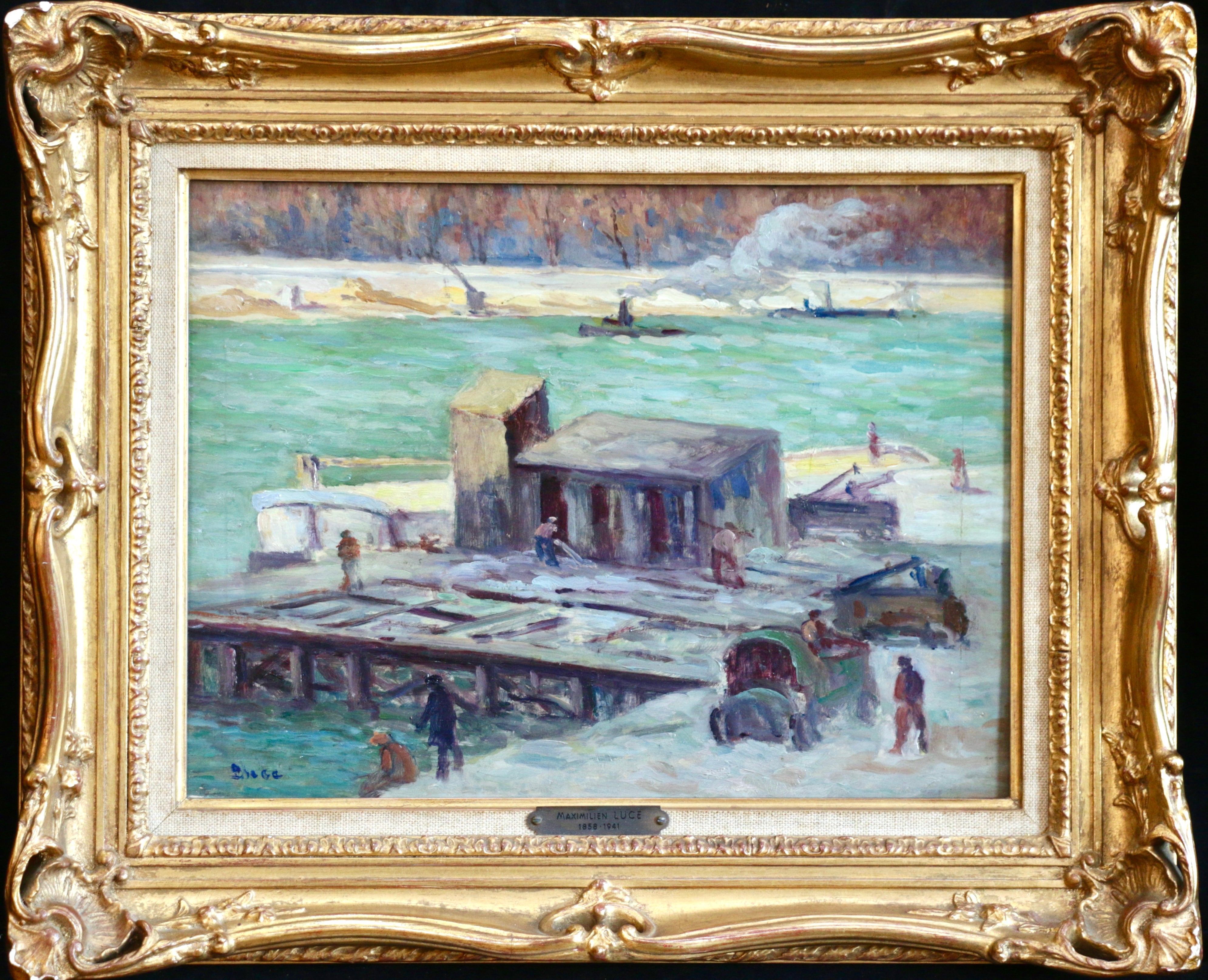 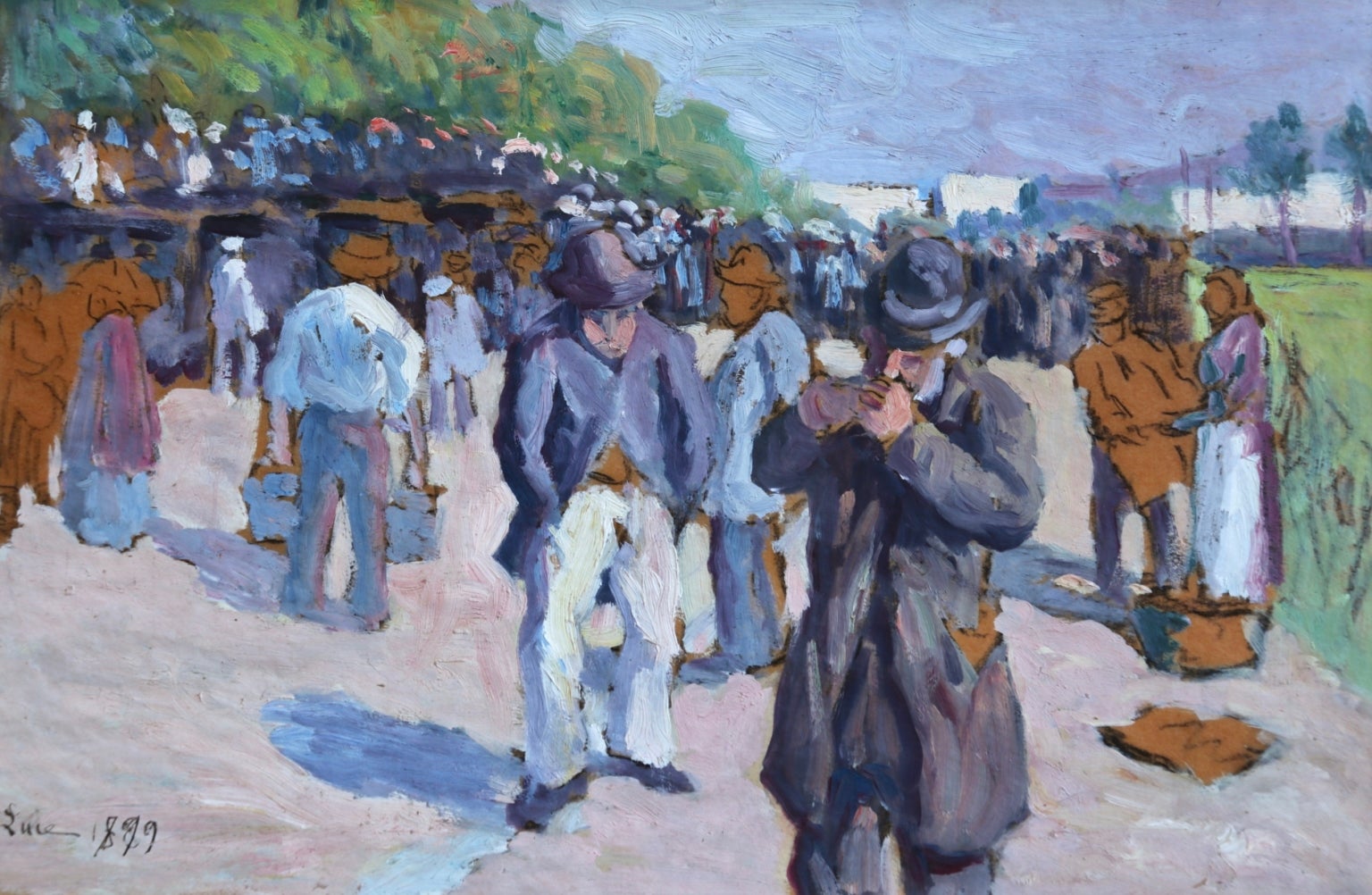 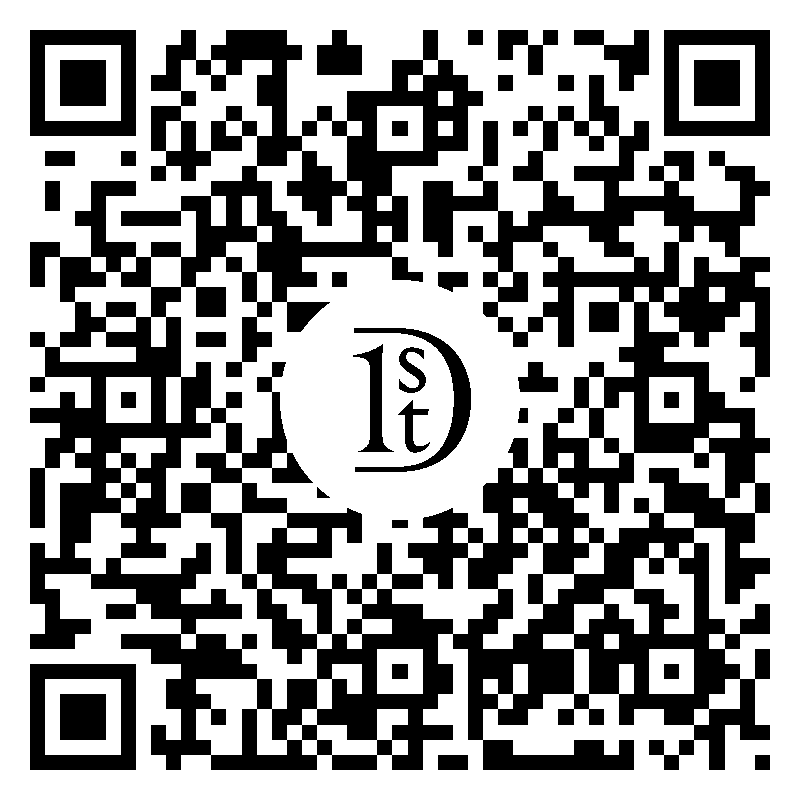 A wonderful oil on board by French impressionist painter Maximilien Luce, depicting labourers mining in Charleroi. Signed lower left. With many thanks to Mme. Denise Bazetoux for conforming the authenticity of this work and its date. Dimensions: Framed: 20"x25" Unframed: 15"x20" Provenance: Lucien Lefebvre Foinet - Paris (labels verso) Maitre Claude Robert - Paris c. 1950 Private Belgian collection Maximilien Luce began an apprenticeship with the wood engraver Henri Théophile Hildibrand in 1872, and simultaneously studied drawing at evening class. In 1876, having qualified as an engraver, he joined a workshop where illustrations were engraved for many French magazines and some foreign periodicals. He went to London in 1877, where he sold some drawings to the magazine Graphic. When he returned to Paris he was called for national service in 1879, first in Brittany, and later in Paris, where he was able to pursue his career as an engraver. During his time in the army he studied under Carolus Duran, probably at the Swiss academy, and worked at the École de Dessin in Les Gobelins. He was mostly self-taught from his observations of nature, and also received guidance from his friend Camille Pissarro. In 1887 he joined the Société des Artistes Indépendants and took part in their exhibitions, which were avant-garde at the time. He also exhibited with the Groupe des Vingt in Brussels in 1889 and 1892. In his youth, the events of the Paris Commune had made an impression on him and he worked on anarchist publications such as Le Père Peinard, founded in 1889, whose cover he designed, La Feuille by Zo d'Axa, and Le Chambard by Gérault-Richard. He also worked on L'Assiette au beurre, Les Hommes d'aujourd'hui, L'Illustration, La Révolte, Les Temps nouveaux. In 1894 he was implicated in the 'Procès des Trente' (Trial of the Thirty), which earned him a prison sentence. These events inspired a collection of lithographs entitled Mazas. He then took refuge in Charleroi in Belgium. From 1920 he was active in the area around Rolleboise. He became president of the Société des Artistes Indépendants, as successor to his friend Signac after his death in 1935. He renounced his presidency at the beginning of the German occupation as a protest against Jewish artists being forbidden to exhibit. He corresponded with many other painters, including Charles Angrand, Georges Seurat, Théo Van Rysselberghe and his friend Louis Valtat. With Seurat and Signac he was one of the founders of the Neo-Impressionist school, which was based on the scientific study of light and the analysis of the decomposition of colours. As such he used the technique known as Divisionism or Pointillism, using individual points of colour to interpret the complexity of the composition of the colours, while preserving their vibrancy and defining the light and shadow of the elements in the picture. During his stay in Belgium he played a part in establishing Neo-Impressionism outside France. For many years he was a strict Pointillist, but he then adopted a more relaxed, more fluid technique, which can be seen in his landscapes in Rolleboise, departing from the rigour of Neo-Impressionism and returning to a late Impressionist style. The majority of his works are landscapes, mainly of France. He painted a smaller number of urban landscapes, often of working class districts, and often painted at night, providing a snapshot of the world of work at that time. His figures set him apart from other Neo-Impressionists, as he genuinely wanted to share the cares and troubles of the people, and showed this in the attitudes of the road workers, the dockers and the builders going about their daily work. Solo exhibitions and retrospectives of his work include: 1966, Palais des Beaux-Arts, Charleroi; 1977, Musée Toulouse-Lautrec, Albi; 1983, Musée Marmottan, Paris; 1987, Musée Pissarro, Pontoise; 1995, Maximilien Luce (1858-1941): Anarchist Painter ( Maximilien Luce (1858-1941): peintre anarchiste), Charleroi; 2000, Maximilien Luce. Painting the Human Condition ( Maximilien Luce. Peindre la condition humaine), Musée de l'Hôtel-Dieu, Mantes-la-Jolie. Museum and Gallery Holdings: Fécamp (Mus. des Arts et de l'Enfance): The Maas in Rotterdam (1908, oil/card) Geneva (Petit Palais): View of Paris from Montmartre (1887); Camaret-sur-Mer (1894) Otterlo (Kröller-Müller Mus.): View of Montmartre (1887) Paris (MNAM-CCI): Portrait of the Painter H.- E. Cross; The Seine at Rolleboise Paris (Mus. d'Orsay): Studies for Factories near Charleroi St-Tropez (Mus. de l'Annonciade): Coast near the Citadelle, St Tropez

Maximilien Luce was born in Paris in 1858. In 1876 he apprenticed in the shop of the engraver Eugène Froment (1844–1900), a qualified craftsman and graduate of the Ecole des Arts Décoratifs. There, Luce worked on numerous illustrations for French newspapers and foreign periodicals.

In 1877, Luce left Paris and went to London. When he returned to France in 1879 he was called for military service. It was during his military service that Luce met Charles Emile Carolus-Duran (1837–1917), the famous French painter and sculptor who was an instructor to countless artists. Luce entered Carolus-Duran’s studio, a move that not only provided him with meticulous training as a draftsman but also introduced him to the leading painters of the time. Luce met Camille Pissarro (1830–1903), with whom he became very good friends and who gave Luce much artistic advice. Along with Pissarro, Georges Seurat (1859–1891) and Paul Signac (1863–1935), Luce was one of the founders of the Neo-Impressionist School (i.e., the Pointillists).

Luce joined the Société des Indépendants in 1887 and consistently participated in the avant-garde group’s exhibitions. Though landscapes made up most of his oeuvre, Luce executed some marvelous paintings of people in the Pointillist style, and this social realist aspect differentiated him from many of his fellow Neo-Impressionists. For a period of time, Luce was a strict Pointillist. After 1920, however, Luce started to paint in a freer manner. He accepted the position of President of the Société des Artistes Indépendants in 1935, a role from which he would eventually resign as a statement against the society’s growing posture towards restricting Jewish artists from exhibiting.

Luce made a significant contribution to exporting Neo-Impressionism and maintained strong ties with the Belgian Pointillist Théo van Rysselberghe (1862–1926). An indefatigable artist, he left a sizable amount of work in various mediums and remains a very important figure in French Post-Impressionist art. Maximilien Luce died in 1941. 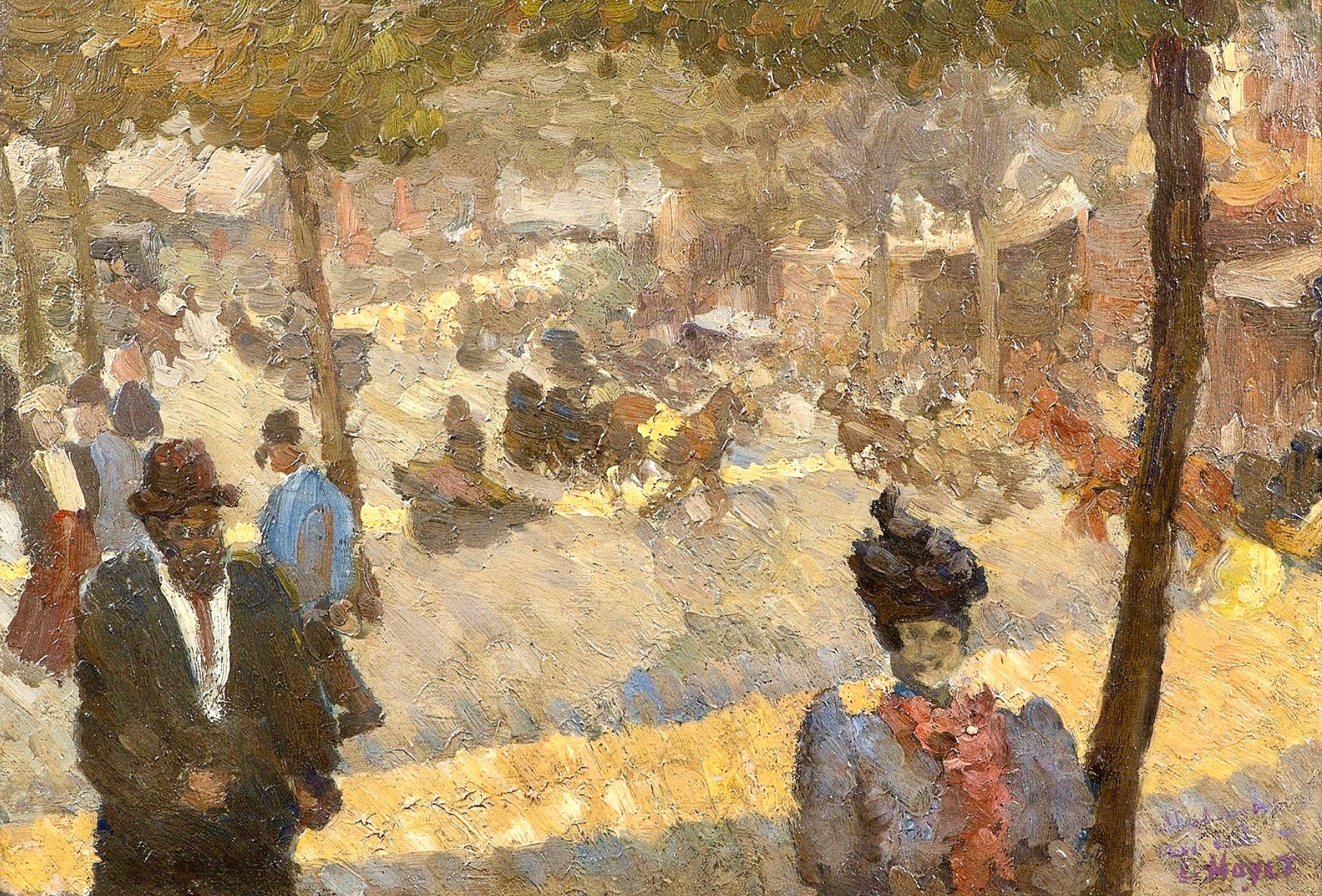 About the Seller
5 / 5
Located in Marlow, United Kingdom
Platinum Seller
These expertly vetted sellers are 1stDibs' most experienced sellers and are rated highest by our customers.
Established in 2001
1stDibs seller since 2016
429 sales on 1stDibs
Typical response time: 1 hour
More From This Seller
View All From Seller

$29,000
Le Depart - Man Gets off Horse
By Maximilien Luce
Located in Miami, FL
Le Depart Photo certificate from Denise Bazetoux confirms the authenticity of the work. Work is framed in an ornate girl reproduction frame Second supplement of the Catalogue Raison...
Category

$156,250
"Lady of Summer"
By Martha Walter
Located in Lambertville, NJ
Jim’s of Lambertville is proud to offer this artwork by: Martha Walter (1875-1976) Born in Philadelphia in 1875, Martha Walter attended Girls’ High School followed by the Pennsylva...
Category

$22,500
"Autumn Afternoon in Luxembourg Garden"
By Martha Walter
Located in Lambertville, NJ
Jim’s of Lambertville is proud to offer this artwork by: Martha Walter (1875-1976) Born in Philadelphia in 1875, Martha Walter attended Girls’ High School followed by the Pennsylva...
Category