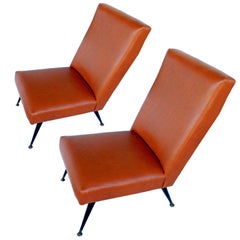 H 30.71 in. W 30.71 in. D 33.08 in.
Pair of Marco Zanuso Regent Lounge Chairs for Arflex, Italy, 1960s
By Arflex, Marco Zanuso
Located in Berlin, DE
Pair of early edition Regent armchairs designed by Marco Zanuso for Arflex, circa 1960. The chairs are on walnut glides with a new upholstery in Kvadrat steelcut fabric.
Category

Pair of Midcentury Armchairs in the Manner of Marco Zanuso

H 35 in. W 32 in. D 32 in.
Pair of Regent Chairs by Marco Zanuso
By Marco Zanuso
Located in San Francisco, CA
A pair of 'Regent' chairs designed by Marco Zanuso for Arflex, Italy in 1960. The pair have been fully restored with tufting, leather on the frame and wool on the seat and back cushi...
Category

H 33 in. W 15.5 in. D 19.5 in.
Midcentury Italian Armchairs in Style of Marco Zanuso
By Marco Zanuso
Located in Houston, TX
Very comfortable and newly re-upholstered Italian armchairs. Arm rests slowly transfer into the sides of the chair by creating “kidney” shape. Each chair is elevated by 4 slim, but v...
Category

Midcentury Recliner in the Manner of Marco Zanuso

Pair of Woodline Lounge Chairs by Marco Zanuso for Arflex

How Much are 1960s Marco Zanuso Chairs?