H 17.72 in. W 70.87 in. D 23.63 in.
"Construction" Minimalist Bench in Natural Solid Wood and Painted Steel
By Alessandra Delgado
Located in Sao Paulo, Sao Paulo
The design Construction bench is inspired in the improvised structures used in non-professional constructions such as scaffolding made of reclaimed materials from the construction si...
Category

H 17.72 in. W 63 in. D 17.72 in.
Due Brazilian Contemporary Wood Bench and Table by Lattoog
Located in Rio de Janeiro, RJ
The bench Due (two in Italian) has a double function: Table and seat in one single piece.
Category

Due Brazilian Contemporary Wood Bench and Table by Lattoog

H 15.75 in. W 70.87 in. D 19.69 in.
"Ovni" Bench
By Cultivado em Casa
Located in Belo Horizonte, MG
After a long intergalactic voyage, OVNI (UFO) lands in the form of a bench. A visual stimulus that celebrates geometrism and vibrant colors with a striking design.
Category

H 17.72 in. Dm 14.97 in.
Verdaço Contemporary Bench Sculpture
By Cultivado em Casa
Located in Belo Horizonte, MG
A chaotic and at the same time systematic, meticulous tangle. Verdaço is green, it's natural. A nest that hugs, welcomes, protects. The encounter between subtlety and rigor, softness...
Category

H 52.37 in. W 77.56 in. D 31.11 in.
Jorge Zalszupin “Oxford” Bench for L’Atelier, Brazil, 1960s
By Jorge Zalszupin
Located in Utrecht, NL
This exceptional “Oxford” two-seat bench was designed and manufactured by the Polish born Brazilian design icon, Jorge Zalszupin and his company, L’Atelier. When it comes to Zals...
Category

H 28.55 in. W 48.04 in. D 28.55 in.
Domingos Tótora "Terrão" Bench, Brazil, 2017
By Domingos Tótora
Located in Utrecht, NL
This Domingos Tótora “Terrão” bench was made of eco-conscious recycled and painted cardboard. Resting on two simple iron supports, this bench has a clean and natural character. Th...
Category

H 15.75 in. Dm 17.72 in.
Morototó Puff
By Sergio Matos
Located in Campina Grande, Paraiba
Inspiration comes from flora. It germinates in the form of the Morototó puff, the name of the tree that lays an imposing green in the Brazilian Amazon Forest. From the elliptical des...
Category 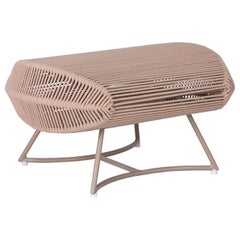 H 14.18 in. W 26.78 in. D 19.69 in.
Carambola Stool Extra Large
By Sergio Matos
Located in Campina Grande, Paraiba
The concept comes from the shape of the carambola fruit. The structure can be produced in carbon steel or aluminum. Plot made by hand using naval rope.
Category

H 15.75 in. Dm 47.25 in.
Carambola Basket
By Sergio Matos
Located in Campina Grande, Paraiba
The concept comes from the shape of the carambola fruit. The structure is made of steel. Trace made by hand using naval rope.
Category

H 19.69 in. W 97.64 in. D 60.63 in.
Taturana Bench, 3 Seat
Located in Campina Grande, Paraiba
The designer Sergio J Matos, presents the Tatuarana bench. This time, with a look at the biome of the forest that goes beyond the great animals, being also inhabited by an immensity ...
Category

H 16.93 in. W 72.84 in. D 24.02 in.
Taturana Bench - 5 seats
Located in Campina Grande, Paraiba
The designer Sergio J Matos, presents the Tatuarana Bench. This time, with a look at the biome of the forest that goes beyond the great animals, being also inhabited by an immensity ...
Category

H 16.93 in. W 119.69 in. D 24.02 in.
Taturana Bench - 5 seats
Located in Campina Grande, Paraiba
The designer Sergio J Matos, presents the Tatuarana Bench. This time, with a look at the biome of the forest that goes beyond the great animals, being also inhabited by an immensity ...
Category

H 13.78 in. W 72.84 in. D 25.99 in.
"Kansai" Bench by Ronald Sasson, Brazilian Contemporary Design
By Ronald Sasson
Located in Sao Paulo, SP
The Kensai bench is one of his most recognized designs. It is a limited edition of 10 pieces, made with brass and wood. The brass appears internally, and the wood blades coat the ben...
Category

H 16.93 in. W 76.78 in. D 22.05 in.
"RAJ" Contemporary Imbuia Wood and Brass Bench
By Fabio Stal
Located in Sao Paulo, SP
This bench is made of Brazilian imbuia wood with brass details, it draws inspiration from the 1970s design and a very elegant combination of wood and brass. The legs are in solid woo...
Category

Rustic bench or table used in Cocoa production in Brasil

H 18.75 in. W 47.75 in. D 22 in.
Rosewood Bench or Coffee Table with Magazine Holder by Jorge Zalszupin
By Jorge Zalszupin
Located in Hollywood, CA
A low Brazilian Rosewood bench with a patchwork pattern and a sling leather magazine holder at one end designed by Jorge Zalszupin. It can also function as a long low coffee table. T...
Category

H 9.85 in. W 23.63 in. D 120.48 in.
1950s Bench / Auxiliary Table in Pau Marfim Wood by Acácio Gil Borsoi, Brazil
By Acácio Gil Borsoi
Located in Sao Paulo, SP
Huge table or bench made of vertical Pau Marfim slats, with magazine holder underneath and a formica top table to the right side. This piece is unique and made to order in 1958. It s...
Category

H 17.72 in. W 98.43 in. L 17.72 in.
Carlo Hauner Curved Brazilian Hardwood Bench from Brazil
Located in Hollywood, CA
A huge slightly curved bench from Brazil in exotic hardwood with slats long the length and solid flat bar legs. This piece is attributed to Carlo Hauner. Many pieces are stored in...
Category

How Much are Brazilian Metal Benches?

On the Origins of Brazilian

Commencing in the 1940s and '50s, a group of architects and designers transformed the local cultural landscape, merging the modernist vernacular popular in Europe and the United States with traditional Brazilian techniques and indigenous materials.

Key influencers during the mid-20th century include natives Oscar Niemeyer, Sérgio Rodrigues and José Zanine Caldas as well as such European immigrants as Joaquim Tenreiro, Jean Gillon and Jorge Zalszupin. These creators frequently collaborated; for instance, Niemeyer, an internationally acclaimed architect, commissioned many of them to furnish his residential and institutional buildings.

Hallmarks of Brazilian design from that period include smooth, sculptural forms and the use of native woods like rosewood, jacaranda and pequi. The work of designers today exhibits many of the same qualities, though with a marked interest in exploring new materials (witness the Campana Brothers stuffed-animal chairs) and an emphasis on looking inward rather than to other countries for inspiration.

Finding the Right Benches for You

Today, benches are a great option to maximize seating in your house and outdoor space. The perfect option to create a warm, welcoming atmosphere in foyers and entryways, benches can also transform dining areas, making it possible to host a hungry family with limited space. Whether you’re sprucing up your entertaining with upholstered Empire-style benches or adding more options to a dining room that’s seen a farmhouse makeover, this humble furnishing has only become more versatile over the years. Designers have recognized the demand for a good bench, crafting the convenient seating alternative from a range of materials, including wood, iron and even concrete.

Mid-century modern benches from George Nakashima, Charlotte Perriand and the pared-down Platform bench by George Nelson for Herman Miller are classics of innovation, but maybe you’re looking for a more unique design approach to your home's seating. Opt for something totally outside the box — an antique pine church-pew bench paired with a vintage wool throw and stationed under the mounted coatrack in your mudroom is a distinctive touch.

For your outdoor oasis, a wrought-iron patio bench is the obvious choice but not the only option. An enclosed back patio would do well to inherit a rattan bench with cushions, but it can be susceptible to weathering and should be covered or moved indoors when not in use.

Whatever your seating arrangement needs are, find vintage, new and antique benches for every space on 1stDibs.