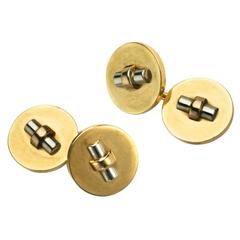 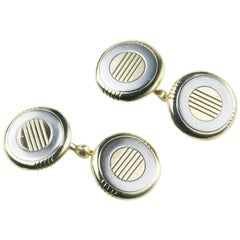 W 0.57 in.
Cartier 18 Carat Gold Stirrup Cufflinks, circa 1935
By Cartier
Located in Napoli, Italy
An elegant pair of gold and sapphire stirrup cufflinks by Cartier c.1935, each double ended link with hinged stirrup at either end. An excellent flip-up mechanism, very easy to put o...
Category

W .38 in. L .50 in.
Cartier Cigar & Match Cufflinks
By Cartier
Located in London, GB
An exceptional pair of Cartier Art Deco cigar and match cufflinks, with enamelled cigars and match heads, mounted in 18ct gold, with chain links. Each cigar is set with an old-cut d...
Category

W 0.4 in. L 1.19 in.
CARTIER PARIS Diamond & Sapphire Cufflinks
By Cartier
Located in New Orleans, LA
These elegant Art Deco cufflinks from the famed jewelry house of Cartier are the pinnacle of taste. Crafted in a sleek geometrical motif, these links boast cabochons of deep blue sap...
Category

Cartier Fine Sapphire Cuff and Stud Set
By Cartier
Located in Aspen, CO
9.8 cts of fine Burma quality sapphires are set into this platinum and 18K yellow gold gentleman's set by Cartier. Each piece is signed and numbered. C. 1950
Category

Antique 1925 Cartier Art Deco Onyx and Diamond 18 Karat Cufflinks
By Cartier
Located in Miami, FL
These magnificent antique Art Deco Cartier cufflinks, circa 1925, were crafted in platinum and bright 18K yellow gold on the back. Each circular onyx panel is set to the center w...
Category

cartier Enamel and Gold Cufflinks, circa 1940
By Cartier
Located in London, GB
A pair of Cartier, enamel and gold cufflinks, with red and black cloisonné enamel, in a geometric pattern, mounted in 18ct gold, signed Cartier and numbered 29, in a Cartier red box,...
Category

cartier Enamel and Gold Cufflinks, circa 1940

Dm 0.56 in.
Cartier Platinum Diamond, Bloodstone and gold cufflinks
By Cartier
Located in Aspen, CO
Signed and numbered Cartier, New York, these back to back cuff-links of natural Blood-stone centers a European cut diamond set in platinum and backed in 18K gold. Pierre/Famille, ...
Category

Cartier Gold Fan Cufflinks
By Cartier
Located in New York, NY
A exceptional pair of 18kt yellow gold cufflinks by Cartier. Designed in an open fan motif with a ridged surface. These handsome cufflinks are solid and have a nice weight. Signed Ca...
Category

H 0.56 in. W 0.56 in.
Cartier of Paris, Ruby and Diamond Gold Cufflinks,original case, c,1920
By Cartier
Located in London, GB
A fine pair of yellow gold cufflinks with Burma rubies of excellent colour, with two rose cut diamonds around the edge in platinum, signed Cartier of Paris, in original case. French ...
Category

Cufflinks Cartier Sapphire and Diamond with Two Matching Studs, circa 1930

W 0.48 in. L 0.99 in.
Get Updated with New Arrivals
Save "Cartier Art Deco 18k Gold Cufflinks", and we’ll notify you when there are new listings in this category.

How Much are Cartier Art Deco 18k Gold Cufflinks?

A Close Look at art-deco Jewelry

Fascination with the Jazz Age is endless, and even today jewelry designers continue to be inspired by authentic Art Deco jewelry and watches.

The Art Deco period, encompassing the 1920s and ’30s, ushered in a very distinct look in the design of jewelry. There were many influences on the jewelry of the era that actually began to take shape prior to the 1920s. In 1909, Serge Diaghilev brought the Ballet Russes to Paris, and women went wild for the company’s exotic and vibrant costumes It’s no wonder, then, that jade, lapis lazuli, coral, turquoise and other bright gemstones became all the rage. There already existed a fascination with the East, particularly China and Japan, and motifs consisting of fans and masks started to show up in Art Deco jewelry.

However, the event that had the greatest influence on Deco was the excavation of the tomb of King Tut in 1922. When the world saw what was hidden in Tut’s burial chamber, it sent just about everyone into a frenzy. Pierre Cartier wrote in 1923 that “the discovery of the tomb will bring some sweeping changes in fashion jewelry.” And he couldn’t have been more right. “Egyptomania” left an indelible mark on all of the major jewelry houses, from Cartier to Van Cleef & Arpels, Boucheron and Georges Fouquet. (Cartier created some of the most iconic jewelry designs that defined this era.)

While a lot of Art Deco jewelry was black and white — the black coming from the use of onyx or black enamel and the white from rock crystal and diamonds — there is plenty color in jewelry of the era. A perfect accent to diamonds in platinum settings were blue sapphires, emeralds and rubies, and these stones were also used in combination with each other.

Many designers employed coral, jade and lapis lazuli, too. In fact, some of the most important avant-garde jewelers of the period, like Jean Després and Jean Fouquet (son of Georges), would combine white gold with ebony and malachite for a jolt of color.

A lot of the jewelry produced during this time nodded to current fashion trends, and women often accessorized their accessories. The cloche hat was often accented with geometric diamond brooches or double-clip brooches. Backless evening dresses looked fabulous with sautoir necklaces, and long pearl necklaces that ended with tassels, popular during the Edwardian period, were favored by women everywhere, including Coco Chanel.