H 14 in. Dm 7.5 in.
Contemporary Chandelier #3
By Stillux
Located in Milan, IT
Hanging from thin metal wires, the outstanding element of this chandelier is its skillfully balanced Silhouette that comprises a straight, chrome-finished metal bar from which 12 cur...
Category 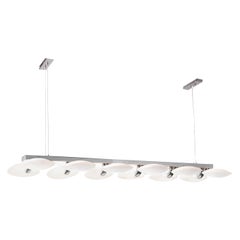 H 4.73 in. W 63 in. D 21.66 in.
Contemporary Chandelier #1
By Stillux
Located in Milan, IT
Exquisitely crafted by expert glassmakers, this stunning chandelier showcases an essential and distinctly modern silhouette comprising a dainty metal stem from which 10 inclined arms...
Category 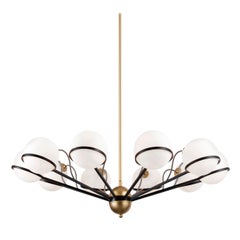 H 29.53 in. Dm 39.38 in.
Contemporary Gold Chandelier
By Stillux
Located in Milan, IT
An enthralling interplay of different textures distinguishes the elegant design of this chandelier. The cylindrical, grooved lampshades in transparent glass hosting the 17 tubular LE...
Category 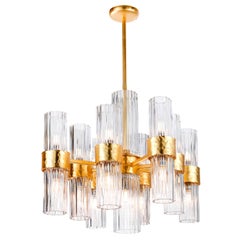 H 39.38 in. W 28.35 in. D 25.6 in.
Contemporary Metal Chandelier
By Stillux
Located in Milan, IT
The imposing allure of this precious chandelier results from the combination of its dimensions with the rich yet orderly design characterizing it. Slender, grooved cylindrical lampsh...
Category 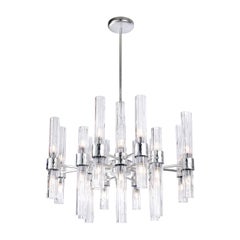 H 51.19 in. W 33.86 in. D 33.47 in.
Contemporary Tiered Chandelier
By Stillux
Located in Milan, IT
Bold and sculptural, the imposing design characterizing this three-tiered chandelier merges with the chromatic choice of black and white that lends it a sublime, timeless flair. The ...
Category

H 55.12 in. Dm 43.31 in.
Contemporary Silver Opaline Chandelier
By Stillux
Located in Milan, IT
Sharp and exquisitely geometric lines mark this eye-catching chandelier, whose contemporary soul is particularly evident in the prism-like lampshades in sanded glass hosting the four...
Category 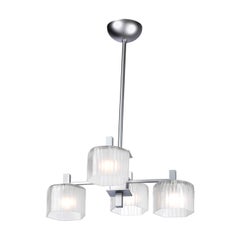 H 31.5 in. Dm 17.72 in.
Contemporary 10 Lights Chandelier
By Stillux
Located in Milan, IT
Ten downward-facing, grooved lampshades in transparent glass are distributed in the three metal tiers of this exquisitely modern chandelier. Its Silhouette creates a pyramidal shape ...
Category 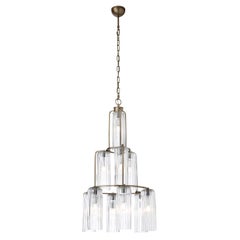 H 39.38 in. Dm 21.66 in.
Contemporary Silver Transparent Chandelier
By Stillux
Located in Milan, IT
Hanging from thin stay rods that connect it to the ceiling mount, the prized frame of this chandelier is crafted of satin silver and comprises square arms sustaining the seven lampsh...
Category 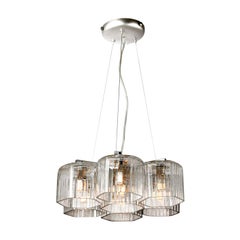 H 5.91 in. Dm 14.57 in.
Contemporary Silver Large Chandelier
By Stillux
Located in Milan, IT
Boasting a thin frame in prized silver, the stately character of this stunning chandelier exudes from its 36 diffusers in sanded matte glass hosting as many LED sources (each G9 max ...
Category 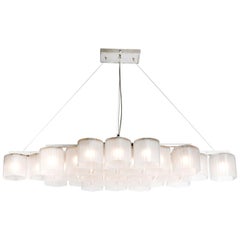 H 40 in. Dm 36 in.
Contemporary LED Chandelier by Soft Baroque
By Soft Baroque
Located in Copenhagen, DK
Unique handmade black nickel-plated brass and LED Chandelier from the "BN&F" series by the London based design duo soft Baroque. Custom designs and sizes are available on request. ...
Category

H 44.1 in. W 47.25 in. D 47.25 in.
Oblong Contemporary Chandelier with Tapered Crystals
Located in Minneapolis, MN
This incredibly crafted chandelier features a unique oblong shape and lovely hanging crystals. When illuminated, this chandelier gives off a stunning warm glow that is accentuated by...
Category

H 51.19 in. W 35.44 in. D 15.75 in.
Orb Enclose: Handmade Solid Copper Contemporary Chandelier
By Luminosa
Located in San Miguel de Allende, MX
The Alquimia Orb enclose by Luminosa is a handmade solid copper pendant chandelier designed for the modern interior. Polished copper on the inside with our signature patina ¨cafe¨ on...
Category

H 20 in. Dm 25 in.
Contemporary French Polished Steel Eight-Light Chandelier
Located in Woodbury, CT
This contemporary polished steel chandelier will shine in any setting. With an unusual twisted rope design and eight sockets that accept regular-sized bulbs, it's the perfect piece o...
Category

H 24 in. Dm 30 in.
Nicole, Brass, Hand-Sculpted, Contemporary Chandelier, Kalin Asenov
By Kalin Asenov
Located in Savannah, GA
Nicole is a pendant light, part of the Posse collection; a system designed around the core ideas of collaboration and play.? The pendant is created to give the customer freedom in...
Category

H 36 in. W 15 in. D 15 in.
Jackson, Brass, Hand-Sculpted, Contemporary Chandelier, Kalin Asenov
By Kalin Asenov
Located in Savannah, GA
Jackson is a pendant light, part of the Posse collection; a system designed around the core ideas of collaboration and play.? The pendant is created to give the customer freedom i...
Category

H 36 in. W 15 in. D 15 in.
Contemporary Chandelier, 6 Arms Red Murano Glass by Multiforme
By Multiforme
Located in Trebaseleghe, IT
Multiforme Tobia chandelier 6 lights. red Murano glass with castle arms climbing arms. The blown glass chandelier Tobia harks back to the design typical of the first half of the 20t...
Category

2010s Italian Other Chandeliers and Pendants

H 7 in. Dm 20 in.
McKenzie, Brass, Hand-Sculpted, Contemporary Chandelier, Kalin Asenov
By Kalin Asenov
Located in Savannah, GA
McKenzie is a pendant light, part of the Posse collection; a system designed around the core ideas of collaboration and play. The pendant is created to give the customer freedom i...
Category

H 36 in. W 15 in. D 15 in.
Heather, Brass, Hand-Sculpted, Contemporary Chandelier, Kalin Asenov
By Kalin Asenov
Located in Savannah, GA
Heather is a pendant light, part of the Posse collection; a system designed around the core ideas of collaboration and play. The pendant is created to give the customer freedom in...
Category

H 36 in. W 15 in. D 15 in.
Judy, Brass, Hand-Sculpted, Contemporary Chandelier, Kalin Asenov
By Kalin Asenov
Located in Savannah, GA
Judy is a pendant light, part of the Posse collection; a system designed around the core ideas of collaboration and play.? The pendant is created to give the customer freedom in t...
Category

H 36 in. W 15 in. D 15 in.
Laura Kirar, "Pájaro Negro" Contemporary Chandelier, Mexico, 2019
By Laura Kirar
Located in New York, NY
Laura Kirar's chandelier of steel, black sansevieria, and Jipijapa palms is a testament to both her years of design experience and her commitment to the crafts and materials of her a...
Category

How Much is a Contemporary Entry Chandelier?

The average selling price for a contemporary entry chandelier at 1stDibs is $3,081, while they’re typically $90 on the low end and $109,177 for the highest priced.