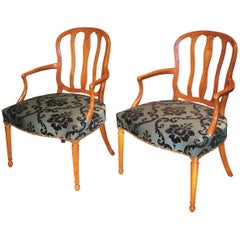 H 47.5 in. W 23.75 in. D 24 in.
Art Deco Continental Armchair in Walnut
Located in Houston, TX
One of a kind chairs re-upholstered in a light cream colored fabric. The body of a chair is made out of fine walnut wood. Chair is elevated by the 2 small front legs and elongated pa...
Category

H 38 in. W 23 in. D 20 in.
Continental Style Square Back Armchairs
Located in Stamford, CT
Pair of bleached wood square back armchairs in newly upholstered floral fabric with turned legs, circa 1980s.
Category

H 34.5 in. W 23 in. D 23.25 in.
Pair of Continental Painted Armchairs C. 1920's
Located in Los Angeles, CA
Pair of unusual chinoiserie style carved frames painted in a deep dijon gold. These unique frames are upholstered in a new flack colored washed linen and goose down cushions have be...
Category

H 42.5 in. W 26 in. D 29 in.
Pair of 19th Century Continental Walnut Armchairs
Located in Debenham, Suffolk
Fine pair of carved armchairs, possibly Dutch, circa 1820. Beautifully joined swags and carved back, with a small heart formed in the lower section. Shaped elbow arms, leading down...
Category

H 44.75 in. W 27 in. D 23 in.
Continental Shaped, Carved, and Upholstered Walnut Armchair, 19th Century
Located in Atlanta, GA
Having an arched and handled backrest atop open arms, the shaped fitted seat of Curule form above reverse arched legs joined by a shaped stretcher.
Category

H 36 in. W 26 in. D 23.25 in.
Continental Mid-Century Chair, Antique Oriental Rug Upholstery
Located in Port Chester, NY
This is a unique and very chic mid-century look. The lines of the frame are very much mid-century style, the antique Turkish rug gray-patterned upholstery is quite smart. Comfortabl...
Category

H 34 in. W 24 in. D 29 in.
Continental Mid-Century Chair, Antique Oriental Rug Upholstery
Located in Port Chester, NY
This mid-century occasional chair is a knock-out with its hot pink carpet upholstery. The antique rug has been washed-back and dyed to achieve this great look. Wood has very good c...
Category

H 49.5 in. W 32.75 in. D 34 in.
Continental Empire Klismo Antique Arm Chair, Early 19th Century
Located in Shippensburg, PA
CONTINENTAL EMPIRE MAHOGANY KLISMO BARREL BACK ARM CHAIR First half of the 19th Century Crafted during the later portion of the Empire period in Europe, probably in the French co...
Category

H 33.5 in. W 31.25 in. D 29 in.
Pair of Continental Art Deco Armchairs
Located in Houston, TX
One of a kind chairs re-upholstered in a light cream colored fabric. The body of a chair is made out of fine walnut wood. Chair is elevated by the two small front legs and elongated ...
Category

H 37.5 in. W 25 in. D 22 in.
Design 2 Armchairs from 1960
By Continental Art Deco
Located in Kraków, Małopolska
2 club armchairs by J.Halabala from 1960. The armchairs come from the Czech Republic from Brno. The armchairs have been given a complex manual renovation; the upholstery has been rep...
Category

Continental Armchairs For Sale on 1stDibs

How Much are Continental Armchairs?

Questions About Continental Armchairs
Prices for most continental armchairs on 1stdibs are negotiable. You’ll see a "Make an Offer" button on the item details page, indicating that the seller is willing to consider a lower price. It’s not uncommon for customers to get 15–25% off the list price after negotiating. See our tips for negotiating like a pro.
Only experienced, professional sellers who have applied and been thoroughly vetted by our team of experts can sell continental armchairs and other quality items on our site. Learn more about becoming a 1stdibs seller.
The 1stdibs Buyer Protection Guarantee provides coverage for qualified purchases in the unlikely event that the item arrives not as described or is damaged. We’ll work with you and the seller to find a resolution, ensuring your satisfaction. View details
We have partnerships with the world's best shipping providers to facilitate seamless and fully-insured delivery from the seller's location directly to you, wherever you are in the world. Our logistics team is comprised of dedicated members who arrange all the details with our partners, servicing and supporting all shipments. Learn more about shipping on 1stdibs.
For your convenience, we offer multiple payment methods, including all major credit cards and PayPal. For many purchases we also offer financing options or wire transfer. Learn more about payment options on 1stdibs.