H 39.15 in. W 51.5 in. D 28.15 in.
Antique Welsh Pine Dresser Base
Located in Port Chester, NY
A fabulous Welsh pine cupboard, sideboard or dresser base with some of the most glorious patina and character we have seen. Gorgeous honey colored pine, polished to a glow. Outset pa...
Category

H 32 in. W 65 in. D 17.5 in.
Antique Oak Dresser and Rack
Located in Bradford-on-Avon, Wiltshire
A good North Wales dresser with its original canopied rack in oak of a pleasing pale color and patina.
Category

H 80 in. W 62.5 in. D 18 in.
17th Century Oak Antique Dresser
Located in Gloucestershire, GB
17th century oak antique dresser standing on turned legs with stretchers and with three good deep drawers in the frieze. This dresser is not too deep front to back so does not encroa...
Category

H 35 in. W 75 in. D 19 in.
Antique French dresser Napoleon III style
Located in Los Angeles, CA
An elegant dresser NAPOLEON III style, the hardwear is also elegant and simple ALL SALES ARE FINAL, STORE CREDIT OR EXCHANGE ONLY
Category 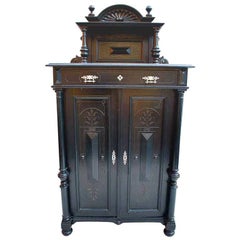 Antique Georgian Oak Dresser Base, circa 1800

H 86.5 in. W 63.5 in. D 20.5 in.
Antique Tall Georgian Mahogany Chest of Drawers Dresser
Located in West Hartford, CT
From the 18th century comes this handsome mahogany with two over four drawers with brass oval plate handles with sphinxes. It has mounded edges and stands on bracket feet. The wood h...
Category

H 34.63 in. W 46 in. D 20.13 in.
Antique Pine Dresser with Brass Handles, 20th Century
Located in London, GB
Excellent 19th century pine dresser consisting of plate rack with cornice, over a base unit with three cupboards and drawers. There are some lovely details making this dresser really...
Category

H 34.5 in. W 51 in. D 17 in.
Antique Pedestal Sideboard, English, Mahogany, Dresser, Victorian, circa 1850
Located in Hele, Devon, GB
This is an antique pedestal sideboard. An English, early Victorian, mahogany dresser dating to the mid-19th century, circa 1850. Select mahogany resplendent with flame figuring an...
Category

H 32 in. W 50.5 in. D 22 in.
Antique Dresser, English, Oak, Victorian, Country Kitchen, Sideboard, circa 1870
Located in Hele, Devon, GB
This is an antique dresser. An English, oak, Victorian country kitchen sideboard dating to the mid-19th century, circa 1870. Good color to the oak with a lustrous wax, polished fi...
Category

H 35.44 in. W 46.86 in. D 22.84 in.
Antique 18th Century Oak Georgian English Dresser with Three Drawers
Located in Casteren, NL
A beautiful 18th century English dresser with three drawers standing on turned legs that were made in England, circa 1730. The side table has a dark solid oak top with three drawers...
Category

H 53.5 in. W 21 in. D 43.5 in.
1900s Antique Original French Three-Drawer Dresser from Chateau de Songy
Located in Armonk, NY
True 1900s antique French dresser full of history that belonged to Songy Castle and was made under the mountains of the French Alps in the area called Saint Sylvestre. This dresse...
Category

H 65 in. W 51.25 in. D 23.25 in.
Storage Dresser in Greystone Lacquer with Antique Mirror Drawers & Lucite Pulls
By Modshop
Located in Compton, CA
With classic Greystone finish and gorgeous antique mirrors is this dresser. The six drawers are finished with antique mirrors and highlights our Lucite and brass square pulls. Creati...
Category

H 52.5 in. W 24.5 in. D 17 in.
Mulholland Dresser in Antique Silver and Natural Metal by Innova Luxuxy Group
By Innova Luxury Group
Located in Los Angeles, CA
The Mulholland Dresser brings beauty and functionality to the bedroom. By combining the charm of hand-finished and chiseled metallic-finished wood with an industrial “x” metal base, ...
Category

Dressers Antique For Sale on 1stDibs

How Much is a Dressers Antique?