H 50 in. W 27 in. D 27 in.
Workstead Helios Cord Pendant Hand Finished Bronze
By Workstead
Located in Hudson, NY
The Helios cord pendant positions a single glowing bulb against a stationary radiant dish, exploring the scale and illumination of an early American candle via the form of a traditio...
Category 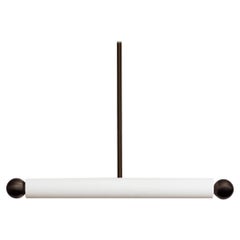 H 15 in. Dm 8 in.
Workstead Orbit Cord Pendant Hand Finished Bronze
By Workstead
Located in Hudson, NY
The orbit cord pendant positions a single glowing bulb against a stationary radiant dish, exploring the scale and illumination of an early American candle via the form of a tradition...
Category

H 41.74 in. Dm 16.93 in.
Squiggle Pendant Light / Hand sculpted Walnut & Red Oak
By Chris Miano
Located in Union City, NJ
The Squiggle light was created though an exploration of shaping solid walnut slab lumber. Designed to bring a smile to any space, each light is thoughtfully selected to highlight the...
Category

H 9 in. Dm 8 in.
Glashütte Limburg Hand Blow Crystal Glass Pendant
By Glashütte Limburg
Located in Vienna, AT
This Glashütte Limburg pendant lamp 4298 impresses with a reduced to the essential design. It receives through the cylindrical diffuser made of hand blown crystal glass, through wh...
Category

H 44.49 in. W 11.82 in. D 11.82 in.
Large Custom Hand-Forged, Wrought-Iron "Mahoning" Pendant
By Far-Fetched, LLC.
Located in Houston, TX
Our exclusive design, the Mahoning light is a handmade, large-scale iron tear-drop shaped pendant. A single Edison socket sits upright on an oversized bobeche in the center of the fi...
Category

H 24.5 in. Dm 15.7 in.
Swedish Hand-Painted Glass Alabaster Style Bowl Pendant Chandelier
Located in Atlanta, GA
Unusual back-painted glass bowl pendant ceiling chandelier that looks so much like alabaster that you have to touch it to believe it! Original golden cording, tassels and canopy. R...
Category

H 27.50 in. Dm 15.75 in.
Doria Hand Blown Glass Ceiling Pendant, Germany
By Doria Leuchten Germany
Located in RHEEZERVEEN, Overijssel
The 40 cm diameter hand blown sphere spreads a beautiful shimmering light due to the structure of the hand blown glass. The lamp is labeled with a Doria sticker and numbered (1283). ...
Category

H 15.75 in. Dm 15.75 in.
Stylish Arts and Crafts Hand Crafted Brass and Hand Engraved Glass Pendant Light
Located in Lisse, NL
Beautiful shape, early 1900s pendant ceiling lamp. If you have a home or an office that dates from the early 1900s or if you are a collector of stylish, Arts & Crafts home accessori...
Category

H 44 in. Dm 24 in.
Art Deco Hand Painted Glass Pendant Light, 1930's
Located in Praha, CZ
A beautiful Art Deco pendant with a handmade glass shade decorated with hand painted floral motifs, an original hand tied tassel and wooden decoration on the bar. There is a crack on...
Category

H 46 in. W 9.9 in. D 9.9 in.
Antique, Striking & Large Hand-Carved & Colored Alabaster Pendant Light Fixture
Located in Lisse, NL
Marvelous size and shape antique pendant. If you are looking for the perfect pendant to grace your living room, kitchen, bedroom or large hallway then this handcrafted antique could...
Category

H 26.2 in. Dm 19 in.
Antique Hand Carved Putti Alabaster Pendant with Removable Bronze Candelabras
Located in Lisse, NL
Five-light chandelier with a marvelous alabaster shade and three removable, double candalabras. We salvaged this large and majestic pendant from a house that was built in the 1880s....
Category

H 23.63 in. Dm 9.85 in.
Modern Fabric Pendant Hand-Painted Light Anemone from Studio Mirei
By Costantini
Located in New York, NY
The Anemone pendant lamp is named for the soft, brightly colored sea creatures that look like a flower and often live on rocks under water. A little mermaid’s best friend, the Anemon...
Category

H 11.5 in. Dm 11 in.
Rare Hand Crafted & Glazed Italian Majolica Pendant w. Ocean Wildlife Sculpture
Located in Lisse, NL
Good size, midcentury made. lantern design 'ocean view light fixture'. If you are looking for the ideal light fixture for your Palm Beach or Malibu (beach) house or if you own the ...
Category

H 28 in. Dm 19.7 in.
1 of the 4 Hand Blown Murano Pendant Lights, 1970s
Located in Rijssen, NL
1 of the of the 12 cascade hand blown lamps in a pendant design, 1960s. Illuminates beautifully. Suitable especially for high ceilings and lounge areas. Minimalistic design executed...
Category

Hand Pendant For Sale on 1stDibs

Choose from an assortment of styles, material and more with respect to the hand pendant you’re looking for at 1stDibs. Frequently made of metal, glass and brass, every hand pendant was constructed with great care. If you’re shopping for a hand pendant, we have 4461 options in-stock, while there are 1825 modern editions to choose from as well. Whether you’re looking for an older or newer hand pendant, there are earlier versions available from the 18th Century and newer variations made as recently as the 21st Century. Each hand pendant bearing Mid-Century Modern, Modern or Art Deco hallmarks is very popular. A well-made hand pendant has long been a part of the offerings for many furniture designers and manufacturers, but those produced by Woka Lamps, William Brand and Mazzega Murano are consistently popular.

How Much is a Hand Pendant?

A hand pendant can differ in price owing to various characteristics — the average selling price 1stDibs is $3,607, while the lowest priced sells for $48 and the highest can go for as much as $316,884.