H 15.75 in. W 37.41 in. D 15.75 in.
Italian Marble Brass and Glass Coffee Table
Located in Chicago, IL
An Italian brass glass and marble coffee table by Stone International. The brass base is reminiscent of the work of Anish Kapoor. The glass top is by far the largest that we have eve...
Category

H 16.25 in. W 60 in. D 20 in.
1960s Vintage Italian Brass and Marble Coffee Table
Located in London, GB
A stylish and beautifully made vintage coffee table in solid brass, with an inset marble top. This was made in Italy and dates from circa 1960s. It is of superb quality, the solid...
Category

H 15.5 in. W 29.5 in. D 22 in.
Midcentury Paolo Buffa Marble and Brass Coffee Table, 1950s, Italy
By Paolo Buffa
Located in Palermo, IT
Elegant coffee table made of curved solid brass with colored marble top. Attributed to Paolo Buffa, Italian production of the 1950s. Wear consistent with age and use.
Category

H 17.33 in. W 39.38 in. D 21.66 in.
Coffee Table in Brass and Marble
By Zanaboni
Located in Milan, IT
This stunning coffee table boasts an elegantly simple silhouette and masterful craftsmanship that make it a timeless addition to any home. A perfect complement to the side table in b...
Category 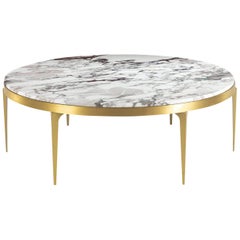 Coffee Table in Brass and Marble

H 15.75 in. W 42.13 in. D 31.5 in.
Okeanos Contemporary Coffee Table in Marble and Brass
By ANAKTAE
Located in Firenze, IT
Contemporary, handmade coffee table in marble with a surface consisting of pieces of mirrors in geometric formations, in a combination of two colors. The base consists of two metalli...
Category

H 13 in. W 31.5 in. D 31.5 in.
1950s Italian Marble Coffee Table on Sculptural Brass Base
Located in Naples, IT
An exceptional 1950s Italian coffee table consisting of an white marble top supported by a sculpted cast brass base with a relief of figures and four legs.
Category

H 16.54 in. W 16.54 in. D 31.5 in.
Italian Marble Coffee Table With Glass Top And Solid Brass Legs
By Troy Smith Studio
Located in Toronto, Ontario
The MGB round coffee table's top is made out of a 3/4" thick starphire glass (Ultra clear glass) and its base is made from a 3/4" thick slab of Rosso Vulcano Italian Marble. Held tog...
Category

H 16.15 in. W 39.38 in. D 17.33 in.
Italian Marble Coffee Table With Glass Top And Solid Brass Legs
By Troy Smith Studio
Located in Toronto, Ontario
The MGB round coffee table's top is made out of a 3/4" thick starphire glass (Ultra clear glass) and its base is made from a 3/4" thick slab of Verde Assoluto Italian Marble. Held to...
Category

H 16 in. Dm 30 in.
Italian Midcentury Coffee Table with Marble Top and Stiletto Brass Feet, 1950s
Located in Clivio, Varese
Magnificent coffee table with gorgeous marble top and metallic legs with brass tips. Made in Italy during the 1950s. The marble has a beautiful natural marble design with veins of ...
Category

H 17.75 in. W 24.5 in. D 24.5 in.
Italian Midcentury Coffee Table with Pink Marble Top and Brass Tips, 1950s
Located in Clivio, Varese
Beautiful particular coffee table with gorgeous pink marble top and metallic legs with brass tips. Made in Italy during the 1950s. This pink marble has a beautiful natural marble d...
Category

H 16.93 in. W 39.38 in. D 54.34 in.
Coffee Table Modern Rectangular Marble White Brass Italian Limited Edition
By Barberini & Gunnell
Located in Ancona, Marche
The ribbon made of brass hugs and supports the precious marble at the same time. Coffee table dimension: L 150, W 73, H 36cm. Each table is hand signed and numbered by the artists - ...
Category

H 16.25 in. W 60 in. D 19.75 in.
Italian White Marble & Brass Set of Three Ovaloid Coffee Tables
Located in Firenze, Tuscany
The free standing coffee tables can be displayed in several manners: like clustered all together or slightly separated from each other, late 20th century. White marble with pink, gr...
Category

H 15 in. W 42 in. D 42 in.
Coffee Table Modern Black Marble Brass Circular Italian Limited Edition Design
By Barberini & Gunnell
Located in Ancona, Marche
The 'Cloud' is a spectacular coffee table with structure in mirror polished brass and top in Marquinia marble. The mirror-like finishing of the brass creates different perceptions of...
Category

H 17.72 in. W 34.26 in. D 19.89 in.
Round Marble and Wood Coffee Double Level Italian Table with Brass Feet, 1950s
Located in Roma, IT
Wonderful midcentury marble base and wood legs coffee table. It has two levels with varnished round bases, indicating a 1950s Italian production, 1950s, Italy. It is a superb side...
Category

H 14.18 in. W 27.56 in. D 43.31 in.
Coffee Table in Calacatta Gold Marble & Brass by Belingardi Clusoni, Italy Stock
By Stefano Belingardi Clusoni
Located in Milan, IT
A segment of world beyond the starry sky, with brass highlights and embellished by the veining in the marble. Belingardi Clusoni creates a dual space, vertical and horizontal, refine...
Category

H 14.18 in. W 27.56 in. D 39.38 in.
Aeneas Solid Marble Coffee Table in Oxidized Brass
By ANAKTAE
Located in Firenze, IT
Solid marble coffee table, model “Aeneas” with inlaid angular pattern in oxidized brass. The angular base echoes the patterns on the surface Handcrafted in Athens, Greece.
Category

H 16.93 in. W 36.23 in. D 18.12 in.
Eclipse X Table in Brass and Carrara Marble, Made in Italy
Located in Firenze, IT
A coffee table that resembles the magical crossing between two white planets that are stroked by the blasting ray of light made with golden brass. The mysterious function of the ...
Category

Eclipse X Table in Brass and Carrara Marble, Made in Italy

H 19 in. W 60 in. D 22 in.
Coffee Table in Brass, Marquinia Marble and Glass Midcentury, 1970s-1980s
Located in Palermo, IT
Beautiful and rare sculptural coffee table for living room and of considerable size, by an unknown designer. The coffee table has two rectangular bases of Marquinia marble with a sec...
Category

H 16 in. W 16 in. D 46 in.
1950s Italian Low Coffee Table with Marble Top
Located in Rome, IT
A coffee table, manufactured in Italy during the 1950s Marble top, wooden legs and brass bar and feets Very good conditions.
Category

Italian Marble And Brass Coffee Table For Sale on 1stDibs

How Much are Italian Marble And Brass Coffee Table?

A italian marble and brass coffee table can differ in price owing to various characteristics — the average selling price 1stDibs is $4,500, while the lowest priced sells for $651 and the highest can go for as much as $42,982.