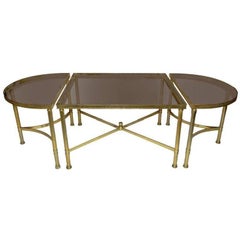 H 17 in. W 48 in. D 20 in.
1950's Maison Bagués Gilt Bronze Coffee Table
By Maison Baguès
Located in New York City, NY
Stunning 1960's Mid-Century Modern gilt bronze with 3/4 inch glass top by Maison Bagués, in vintage original with some wear and patina to the gilt and a few light scratches to he glass.
Category

H 25.2 in. W 23.63 in. D 15.75 in.
Bagues Style Cocktail Table in Cast Bronze
By Maison Baguès
Located in Norwalk, CT
Handsome cast bronze table attributed to Maison Bagues, made in France circa 1930s. The base features an acanthus leaf motif and and attractive bowed stretcher. Top is mirror glass. ...
Category

H 17.33 in. W 39.38 in. D 23.63 in.
Maison Baguès Style Faux Bamboo Iron Glass Top Coffee Table
By Maison Baguès
Located in Wilmington, DE
Offered is a vintage iron and glass table similar to the style of Maison Baguès with a faux bamboo look. This table has an iron base with a blacked-out glass top. It is in good struc...
Category

H 18 in. W 37 in. D 37 in.
Rare Large Faux-Bamboo Bronze Coffee Table by Maison Baguès
By Maison Baguès
Located in Marcq-en-Baroeul, FR
This rare large faux-bamboo coffee is made of bronze with a beautiful faux-antiques mirror top. This is a French work by Maison Baguès. Circa 1940.
Category

H 17 in. W 30 in. D 18 in.
Neoclassical Round Brass Coffee Table with 4 Nesting Tables by Maison Baguès
By Maison Baguès
Located in Marcq-en-Baroeul, FR
This eoclassical round coffee table is made of brass with 4 corner nesting tables. This is a French work by famous Frenvch designer Maison Bagués. Circa 1940.
Category

H 16.5 in. W 42 in. D 42 in.
Coffee Table Tray Lacquer of China Style Maison Baguès in Gilded Bronze
By Maison Baguès
Located in Paris, FR
Coffee table in bronze decoration, tray lacquer of China fits Napoleon 3, the low part is shown solidarity by a spacer with circle in its center. Everything is demountable. Easier ...
Category

H 20.28 in. W 40.36 in. D 21.07 in.
Faux-Bamboo Bronze Coffee Table with Eglomised Mirror Top by Maison Baguès
By Maison Baguès
Located in Marcq-en-Baroeul, FR
This faux-bamboo oval coffee table is made of bronze with a very nice eglomised mirror top. The quality of this cocktail table is particularly good, with a nice chiseled bronze. This...
Category

H 17.72 in. W 45.67 in. D 25.99 in.
Coffee Table Tray Lacquer of China Style Maison Baguès in Gilded Bronze
By Maison Baguès
Located in Paris, FR
Coffee table in gilded bronze, top lacquer of china has decoration, bird, butterfly, the low part is shown solidarity by a spacer with circle in its center. Everything is demountabl...
Category

H 16 in. W 33.5 in. D 33.5 in.
Faux Bamboo Coffee Table by Mason Baguès, circa 1960
By Maison Baguès
Located in Kilmarnock, VA
One of the nicest coffee tables I've had by Baguès over the years being quite a bit heavier gauge bronze than most I’ve had over the years. Wonderful chinoiserie elegance, which lend...
Category

H 16.93 in. W 19.3 in. D 35.44 in.
Maison Baguès, Neoclassical Style Round Brass Coffee Table with Black Lacquered
By Maison Baguès
Located in Marcq-en-Baroeul, FR
This neoclassical style round coffee table is made of brass with a black lacquered glass top. This is a very nice and fine work by famous French designer Maison Baguès, circa 1940.
Category

H 16.25 in. W 54 in. D 18 in.
Rene Drouet Style French Bronze Coffee Cocktail Table
By Maison Baguès
Located in Rio Vista, CA
Fantastic French bronze coffee or cocktail table made in the manner of Rene Drouet. Constructed in the neoclassical taste featuring an x form base with decorative loops centered by a...
Category

H 18 in. W 36 in. D 24 in.
Maison Bagues Coffee Table
Located in charmes, FR
pretty coffee table from Maison Jansen in gilded bronze for the base and a top in fleur de peché marble, all in very good condition.
Category

H 17.72 in. W 29.73 in. D 23.04 in.
Maison Bagues Coffee Table
Located in Houston, TX
Maison Bagues brass and glass coffee table with faux bamboo design and slightly splayed foot at end. Glass has some scratch marks from previous use but perfectly usable.
Category

H 18 in. Dm 22 in.
Get Updated with New Arrivals
Save "Maison Bagues Cocktail", and we’ll notify you when there are new listings in this category.

How Much is a Maison Bagues Cocktail?

A maison bagues cocktail can differ in price owing to various characteristics — the average selling price 1stDibs is $3,650, while the lowest priced sells for $1 and the highest can go for as much as $21,346.

Find the perfect centerpiece for any room, no matter what your personal furniture style on 1stDibs. Browse a vast selection of antique, new and vintage coffee and cocktail tables today.