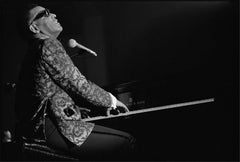 H 30 in. W 43 in.
Mick Jagger, Los Angeles 1972 "Exile?"
By Norman Seeff
Located in Beverly Hills, CA
"I art directed the EXILE ON MAIN STREET album package. Mick was very hands-on and the final decision maker. One afternoon, we asked him to hand-write the liner notes, which we paste...
Category

H 22 in. W 28 in.
Tina Turner, Los Angeles 1983 ʻTina In Motionʻ
By Norman Seeff
Located in Beverly Hills, CA
American-born Swiss singer, songwriter, dancer, and actress Tina Turner in Los Angeles, CA, US, 1983. Norman Seeff On this session: "Working with Tina is liek being exposed to a nu...
Category

H 22 in. W 28 in.
Tina Turner 3 Up, Los Angeles 1983
By Norman Seeff
Located in Beverly Hills, CA
American-born Swiss singer, songwriter, dancer, and actress Tina Turner in Los Angeles, CA, US, 1983. Norman Seeff On this session: "Working with Tina is liek being exposed to a nu...
Category

H 41 in. W 27 in. D .07 in.
Steve Jobs, 1984
By Norman Seeff
Located in Beverly Hills, CA
"I remember together going very deeply with Steve into dreaming and visioning, drinking beer. We weren't over indulging but having fun and there was this moment when he suddenly jump...
Category

H 22 in. W 28 in.
Piano Solo
Located in San Francisco, CA
This artwork titled "Piano Solo" 2000 is original mixed media (oil paint on print) on canvas by American artist and musician Mark Keller, b.1955. It is hand signed and numbered 2/95...
Category

H 30.55 in. W 28.75 in. D 1.30 in.
Bandoneon
Located in San Francisco, CA
This artwork titled "Bandoneon III" is original color lithograph on paper by American artist and musician Mark Keller, b.1955. It is hand signed and inscribed A.P. (artist proof) in ...
Category

Stefanie Schneider
The Girl II (The Girl behind the White Picket Fence), 2011

Stefanie Schneider
The Girl I (The Girl behind the White Picket Fence), mounted, 2011

An assortment of michael ray charles is available on 1stDibs. A selection of these works in the Contemporary, Abstract and Pop Art styles can be found today in our inventory. These items have been produced for many years, with earlier versions available from the 20th Century and newer variations made as recently as the 21st Century. Adding a colorful pieces of art to a room that is mostly decorated in warm neutral tones can yield a welcome change — see the michael ray charles on 1stDibs that include elements of beige, brown, white, yellow and more. The range of these distinct pieces — often created in polaroid, paper and c print — can elevate any room of your home. Some michael ray charles are too large for some spaces — a variety of smaller iterations, measuring # 3.43 inches across, are available.

How Much are Michael Ray Charles?

Prices for pieces in our collection of michael ray charles start at $147 and top out at $49,000 with the average selling for $490.