H 23.63 in. W 22.05 in. D 12.21 in.
Mid-Century Modern Italian Brass Wood and White Glass Chandelier, 1950
By Stilnovo
Located in Aci Castello, IT
A Mid-Century Modern chandelier in the style of Stilnovo, six lights in perfect working order. It works with both 110 and 220 Volt and needs regular e14 bulbs.
Category 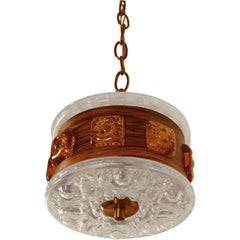 H 24.41 in. W 20.87 in. D 20.87 in.
1950s Mid-Century Modern Italian Teak Brass and Glass Chandelier
By Stilux
Located in Aci Castello, IT
Mid-Century Modern chandelier in original patina with original rectangular white glasses, good conditions overall, only one glass has a line crackle not visible when mounted. Compati...
Category

H 17.72 in. W 14.97 in. D 32.29 in.
Vistosi Mid-Century Italian Murano Glass and Steel "Incamiciato" Chandelier, 60s
By Vistosi
Located in Puglia, Puglia
This imposing Italian chandelier was produced by the iconic company Vistosi, in the 1960s, the Murano glass cylinders are inside and outside in transparent glass and in the center in...
Category

H 22.05 in. W 18.12 in. D 4.73 in.
Mid-Century Chandelier by Drevo Humpolec, 1960‘s
By Dřevo Humpolec
Located in Praha, CZ
Made in Czechoslovakia Made of glass and wood 3x60W, E27 or E26 socket Re-polished Fully functional Original condition.
Category

H 20.87 in. W 20.87 in. D 20.87 in.
Mid-Century Italian Modern & Sculptural 8-Light Chandelier
Located in East Hampton, NY
In the style of Stilnovo, this wonderful 8 light glass, walnut and metal chandelier with original canopy is extremely sculptural, geometric and modern for a classic mid-century light.
Category

H 36 in. W 28 in. D 27 in.
Mid-Century Chandelier by Drevo Humpolec, 1970's
By Dřevo Humpolec
Located in Praha, CZ
Made in Czechoslovakia Made of Glass,Wood 3x E27 or E26 socket US Wiring compatible Re-polished Fully Functional Good Original condition.
Category

H 27.5 in. Dm 27 in.
Mid-Century Pendant Chandelier Teak by Mazzega, Italy 1960s
By Mazzega
Located in Saarbruecken, DE
Italian pendant lamp by Mazzega from the 1960s. Shapely mid-century design made of arched teak wood and three glass balls. The semi-tinted glass makes it the ideal pendant lamp above...
Category

H 27.56 in. Dm 27.56 in.
Venini Chandelier Murano Glass 1930 Iron Structure and Wood Italia
By Venini
Located in Milano, IT
Exceptional Venini chandelier Murano glass, 1930. The height of the body can be adjusted.
Category

H 47.25 in. Dm 29.53 in.
Stilnovo Style Italian Vintage Chandelier in Brass, Opaline Glass and Wood
By Stilnovo
Located in Prato, Tuscany
We kindly suggest you read the whole description, because with it we try to give you detailed technical and historical information to guarantee the authenticity of our objects. Beaut...
Category

H 20 in. W 18.50 in. D 18.50 in.
Midcentury Chandelier Pendant Glass Wood in the Style of Stilnovo Italy 1960s
By Stilnovo
Located in Palermo, IT
Very particular chandelier in the style of Stilnovo in smoked glass, with wooden accessories, light housing in aluminum and nickel-plated brass support, from the 1960s, Italy.
Category

No Reserve
H 50.4 in. Dm 19.69 in.
Get Updated with New Arrivals
Save "Midcentury Chandelier Glass Wood", and we’ll notify you when there are new listings in this category.

How Much is a Midcentury Chandelier Glass Wood?