H 30 in. W 40 in.
Night Palm, Barcelona, Silver gelatin of palm trees, landscape photo at night
By Osheen Harruthoonyan
Located in Kinderhook, NY
A 4x4 inch gelatin silver print of a palm tree on a summer evening in Barcelona, Spain. This was taken just after 30 minutes of fireworks near the boardwalk, so I exposed and printed...
Category

H 40 in. W 60 in.
Vintage Silver Gelatin Photograph Jerusalem Western Wall Night Time Photo 1973
Located in Bal Harbour, FL
Jerusalem Wailing Wall Photo with couple at night. This is for one Photograph from the portfolio entitled "Jerusalem: City of Mankind," The mounting is 14 X 17 inches. the actual ph...
Category

H 14 in. W 11 in.
Night Scene 1956
By Wynn Bullock
Located in Carmel-by-the-Sea, CA
Signed on the front of the mount.
Materials 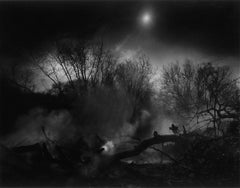 H 8 in. W 10 in.
Night Cage
By Keith Carter b.1948
Located in Sante Fe, NM
Described as a "Poet of the Ordinary," Keith came of age during the turbulent sixties and seventies, developing a singular, haunting style of photography celebrating the human spirit...
Category

H 4.5 in. W 3 in.
Sunset Strip at Night, 1963
By Julian Wasser
Located in Chicago, IL
This photo of Sunset Boulevard captures a time when gas was 28 cents a gallon and clubs like The Trocadero, The Mocambo, The Brown Derby, and The Romanoff ruled the Strip. Silver Ge...
Category

H 8 in. W 8 in.
Stagecoach at Night, Harper's Bazaar
By William Helburn
Located in New York, NY
Carmen Dell'Orefice, Lucinda Hollingsworth, and Joanna McCormick. This photograph is an edition of 50. See below for other editions available. All editions are signed by the photo...
Category

H 16 in. W 20 in.
Foggy Night, Land's End, San Francisco, CA
By Fred Lyon
Located in Santa Monica, CA
Lyon has been called "San Francisco's Brassaï," and has also been compared to Cartier-Bresson, Atget, and Andre Kertesz, but with a San Francisco twist. The lifelong San Francisco Na...
Category

H 20 in. W 24 in.
Night Exposure, Berck Plage, Normandy, France, 2003
By Michael Kenna
Located in Carmel-by-the-Sea, CA
Signed, numbered and dated on front of the mount. Signed, dated, numbered and titled with artist's copyright stamp on back of the mount. Edition of 45. Price and availability subjec...
Category

H 7.25 in. W 8 in.
Night Fishing from Pier, Coney Island
By Harold Feinstein
Located in Dallas, TX
Signed, dated and numbered. Harold Feinstein was born in Coney Island, New York, in 1931. He began photographing in 1946 at the age of 15 and joined the Photo League at age 17. By...
Category

H 18.51 in. W 16.15 in. D 1.38 in.
Night Bloom, Anneliese Seubert, Paris, The New York Times Magazine
By Lillian Bassman
Located in New York, NY
Dress by John Galliano for Haute Couture Givenchy. All editions are signed by the photographer.
Category

H 23.63 in. W 35.44 in.
Yellow Corridor (Night), Milan - Italian architectural color photography
By Richard Heeps
Located in Cambridge, GB
Yellow Corridor, from Richard Heeps series A Short History of Milan which began as a special project for the 2018 Affordable Art Fair Milan. It was well received and the artwork has ...
Category

H 27.56 in. W 23.63 in. D 1.38 in.
Hutong at Night, Beijing - Chinese Color Street Photography
By Richard Heeps
Located in Cambridge, GB
'Hutong' photographed in China in 2013. Richard is well known for capturing things on the brink of change before they disappear and this is a classic example, the modernisation of Be...
Category

H 23.63 in. W 29.53 in. D 0.04 in.
Hutong at Night, Beijing - Chinese Color Street Photography
By Richard Heeps
Located in Cambridge, GB
'Hutong' photographed in China in 2013. Richard is well known for capturing things on the brink of change before they disappear and this is a classic example, the modernisation of Be...
Category

H 33.47 in. W 39.38 in. D 1.97 in.
Yellow Corridor (Night), Milan - Italian architectural color photography
By Richard Heeps
Located in Cambridge, GB
Yellow Corridor, from Richard Heeps series A Short History of Milan which began as a special project for the 2018 Affordable Art Fair Milan. It was well received and the artwork has ...
Category

H 39.38 in. W 33.47 in. D 1.97 in.
Automobiles Parked on a Rainy Night on 52nd Street, New York City
By William Gottlieb
Located in Santa Monica, CA
In 1995 this collection was purchased with financial support from the Ira and Leonore S. Gershwin Fund. The collection consists of jazz photographs taken by writer-photographer Willi...
Category

H 11 in. W 14 in. D .03 in.
Night Palms, South Carolina, silhouette palms trees, beach, waves, ocean
By Osheen Harruthoonyan
Located in Kinderhook, NY
Palm trees in the late evening on a beach in South Carolina. Photographed on 35mm film and printed by hand in a traditional darkroom using the solarization method. Printed on Ilford ...
Category

H 33.47 in. W 41.34 in. D 1.97 in.
Nat 'King' Cole and Cathy Crosby in "Night of the Quarter Moon"
Located in Nümbrecht, DE
Original description from back: "SPOTLIGHT ON A NEW CROSBY....Nat "King" Cole, star of MGM's "NIGHT OF THE QUARTER MOON", comes on the set to watch Cathy Crosby in her motion picture...
Category

H 27.56 in. W 23.63 in. D 1.38 in.
Ringo, John and Paul on the set of A Hard Day's Night, London
By Terry O'Neill
Located in Westwood, NJ
Terry O’Neill’s candid photojournalistic portraits of creative and political luminaries have included Brigitte Bardot, The Beatles, Audrey Hepburn, Nelson Mandela, and Frank Sinatra,...
Category

Terry O'Neill
Ringo, John and Paul on the set of A Hard Day's Night, London, 1964

Meryl Meisler
Grace Jones in Hallway with JudiJupiter and Others on Opening Night Le Farfalle, 1978

On 1stDibs, you can find the most appropriate night silver gelatin for your needs in our varied inventory. There are many Contemporary, Modern and Art Deco versions of these works for sale. Finding the perfect night silver gelatin may mean sifting through those created during different time periods — you can find an early version that dates to the 20th Century and a newer variation that were made as recently as the 21st Century. On 1stDibs, the right night silver gelatin is waiting for you and the choices span a range of colors that includes black, gray, yellow and brown. There have been many interesting night silver gelatin examples over the years, but those made by Richard Heeps, Jack Mitchell, Fred Lyon, Michael Kenna and Lillian Bassman are often thought to be among the most thought-provoking. Artworks like these of any era or style can make for thoughtful decor in any space, but a selection from our variety of those made in silver gelatin print, paper and photographic paper can add an especially memorable touch.

How Much is a Night Silver Gelatin?

A night silver gelatin can differ in price owing to various characteristics — the average selling price for items in our inventory is $1,640, while the lowest priced sells for $95 and the highest can go for as much as $22,000.