H 33.25 in. W 49.5 in. D 22.5 in.
Painted Louis XVI Style French Chest
Located in Austin, TX
Painted Louis XVI style French chest of drawers made of cherrywood with two dovetailed drawers. This piece has been finished with a gray-blue milk paint and gold leaf details. We lov...
Category

H 32.5 in. W 34.375 in. D 16.5 in.
Pair of Louis XVI Style Decorative Painted Chests
Located in WEST PALM BEACH, FL
This is a stylish pair of custom gray painted and parcel-gilt chests. The top has a cross-hatch painted design over three long drawers with cream-painted moulding replicated on the s...
Category 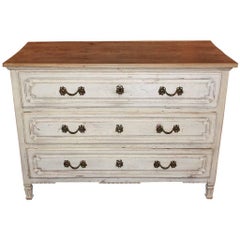 H 34 in. W 44.6 in. D 23.25 in.
19th Century Louis XVI Carved and Painted Three-Drawer Commode Chest
Located in Dallas, TX
Use this elegant painted chest of drawers in an entry way or living room. Crafted in France, circa 1860, this cabinet sits on tapered and fluted feet, and features detailed carved de...
Category

H 32.75 in. W 44.00 in. D 20.00 in.
Painted Louis XVI Commode, 18th Century, France
Located in New Orleans, LA
A two-drawer chest on tapered legs, this painted commode with original paint and hardware is from the period of Louis XVI.
Category

H 33.5 in. W 44.25 in. D 21 in.
Italian Louis XVI Style Chest of Drawers in Lacquered and Painted Wood
Located in London, GB
Italian chest of drawers from the second half of the 20th century. Furniture of great quality and elegance, in style Louis XVI, in carved wood, lacquered and hand painted with floral...
Category

H 34.65 in. W 46.86 in. D 19.3 in.
Louis XVI Dutch Commode
Located in Vista, CA
Louis XVI period Dutch commode with central urn and floral carved motif on the drawers flanked by circular rosette hardware with a barley twist round handle. Each drawer has rosettes...
Category

H 43 in. W 56 in. D 21.5 in.
Louis Seize Chest of Drawers, circa 1790
Located in Greding, DE
A three-drawer chest of drawers standing on square tapering feet with a new green frame with antiqued patina.
Category

Louis Seize Chest of Drawers, circa 1790

H 35.5 in. W 49 in. D 22.5 in.
Painted Commode in the Louis XV Style
Located in Lambertville, NJ
A Louis XVI style painted commode. The pale sage gray finish with a light antiquing over solid wood. The high quality handles are in a gilt cast bronze and original to the piece. Two...
Category

H 34.26 in. W 47.25 in. D 19.69 in.
An 18th Century Lacquered Fruit Wood Tuscan Blanket Chest
Located in Aci Castello, IT
Amazing small chest made in Tuscan in mid-18th century, original conditions and patina. It has been used for the bride's blanket trousseau. It's lacquered in light blue and red on an...
Category

H 29 in. W 40 in. D 18 in.
18th Century Painted Swedish Commode
Located in Carmel, CA
This two part, four drawer Gustavian commode with double edge molding, a dental and strie band detail around the top is both simple and refined. There are Corinthian columns on front...
Category

How Much is a Painted Louis Xvi Chest?

A painted louis xvi chest can differ in price owing to various characteristics — the average selling price 1stDibs is $5,627, while the lowest priced sells for $316 and the highest can go for as much as $232,848.

Finding the Right Commodes Chests Of Drawers for You