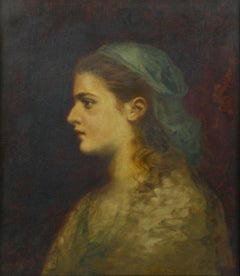 H 21.86 in. W 18.12 in. D 1.19 in.
"Portrait of a Gentleman," oil, portrait, late 19th c, impressionism
Located in Wiscasset, ME
This beautifully executed oil painting uses a subtle palette and sophisticated handling to capture an intimate and appealing portrait of a gentleman. Unsigned, the artist’s biography...
Category

H 24 in. W 16.75 in.
C. Borelli - Late 19th Century Oil, Portrait Of A Medieval Woman
Located in Corsham, GB
A very fine oil portrait of a woman in a 14th Century, linen headdress. The artist has captured a distant look in the sitter's eyes and a pursed, tense mouth. The warmth of the light...
Category

H 35 in. W 28.75 in. D 2 in.
Late 19th Century Oil - A Toast
Located in Corsham, GB
A fine and characterful portrait in oil, showing a French soldier, off duty, raising a glass of red wine in a toast. The soldier seems to be sitting in a small cafe or bistro and has...
Category

H 19.89 in. W 16.15 in.
'Oval Portrait' Vintage Late 19th Century French Portrait Painting
Located in Atlanta, GA
Welcome to Heritage, our carefully curated collection of French vintage and antique paintings. We scour the flea markets and fairs for these gems: poignant portraits of long-gone Me...
Category

H 26 in. Dm 22 in.
Portrait of a Young Lady, Late 19th Century, Oil Paint on Canvas, Figurative
Located in Greding, DE
Large-format three-quarter portrait of a sitting young lady in a black dress with a wide crinoline skirt; the sleeves and collar are made of black lace. A red pearl necklace and a wh...
Category

H 58.27 in. W 45.28 in. D 1.58 in.
Late 19th Century Realist French School Portrait of a Noblewoman Oil on Canvas
Located in roma, IT
Oil painting on canvas depicting portrait of Nobildonna, French school late 19th century. The painting of extraordinary naturalistic rendering, stands out for the marked photographi...
Category

H 46.86 in. W 32.88 in. D 0.79 in.
Late 19th Century Oil - The Reader
Located in Corsham, GB
This fine portrait study in oil depicts an uncommon scene of a gentleman in a tavern, reading a newspaper. A broken glass bottle sits opposite him, on a rustic stool. The artist depi...
Category

19th Century Oil Portrait of a Woman After Manet, Circa 1890

19th Century Oil Portrait of a Young Woman by J. Barclay, Circa 1880

H 36 in. W 31 in. D 3 in.
Portrait of Felia Litvinne - 19th Century Oil, Portrait of a Girl by A Harlamoff
Located in Marlow, Buckinghamshire
A stunning romantic oil on canvas portrait of a young Felia Litvinne, a Russian-born, French-based dramatic soprano. The reknowned singer sat for a number of portraits by Harlamoff. ...
Category

H 33.25 in. W 29.5 in. D 2 in.
Late 19th Century Oil - Elderly Lady with Blue Headscarf
Located in Corsham, GB
A fine oil painting, depicting an elderly lady with a blue headscarf on a dark background. There is a faded signature to the lower right-hand corner. Well-presented in a distressed g...
Category

H 12.13 in. W 10.56 in.
Pair of Late 19th Century Reverse Glass Portraits
Located in London, GB
A pair of late nineteenth century Chinese Export reverse glass portraits, each depicting a noblewoman, one plucking a stringed instrument before a mountainous landscape; the other at...
Category

H 9.25 in. W 7.25 in.
W. Cornwall - Framed Late 19th Century Oil, Napoleon On Board The Northumberland
Located in Corsham, GB
A very fine late 19th century oil depicting Napoleon on board H.M.S. Northumberland. The Northumberland was the boat that transported Napoleon to his exile on St. Helena in 1815. Thi...
Category

Mid to Late 19th Century Portrait of an Elegant Young Woman, Circa 1870

H 14.5 in. W 13 in. D 1 in.
Alix Duval (b.1848) - Framed Late 19th Century Oil, Gentleman with a Pipe
Located in Corsham, GB
A very fine portrait study of a gentleman smoking a pipe. He is dressed in 18th century clothing, with a fashionable tricorn hat. ; Well presented in a fine wood frame with gilt deta...
Category

19th c. American Oil Portrait of a Young Man with his Bible, Circa 1890

H 18.5 in. W 15.5 in. D 2 in.
Portrait of a Gentleman in a Bowler Hat - British late 19th century art
Located in London, GB
This charming British male portrait oil painting is of a gentleman in an iconic bowler hat. Painted circa 1880 it is a wonderful soft focus realistic image of a man in a suit with a ...
Category

Portrait of a Gentleman in a Bowler Hat - British late 19th century art, Circa 1880

H 23 in. W 32 in. D 2 in.
Michele Gordigiani, Portrait of a lady, late 19 century, oil on canvas, signed
By Michele Gordigiani
Located in Florence, IT
Our portrait is part of the mature portrait painting of Gordigiani, influenced by the Macchiaioli’s experience and by the Parisian avant-guarde. Vibrant brush strokes and light color...
Category

H 57 in. W 37 in. D 2 in.
Painting 19th Century Genre Scene Chidren and Nurse in The Park
By Antoine-Victor-Edmond-Madeleine Joinville
Located in Saint-Ouen, FR
JOINVILLE Antoine Victor Edmond Madeleine (1801-1849) Chidren and Nurse in The Park Oil on canvas signed low right and dated 1879 The scene might be located in the French Carribean...
Category

H 28.75 in. W 22.84 in.
Aleardo Villa, Male portrait, 1890 circa, oil on canvas, signed
By Aleardo Villa
Located in Florence, IT
The painting is signed on the right side "AVILLA". Aleardo Villa was a pupil of Giuseppe Bertini and Bartolomeo Giuliano and he graduated at the Fine Arts Academy of Brera, becoming ...
Category

H 20.87 in. W 13.78 in.
Le Fumeur - Symbolist Oil, Portrait of Gentleman Smoking by Eugene Carriere
By Eugène Carrière
Located in Marlow, Buckinghamshire
Oil on canvas circa 1890 by the French symbolist painter Eugène Carrière depicting a man in a wide brimmed hat lighting a cigarette. His face is lit up from the flame of the match an...
Category

H 24 in. W 21 in.
Michele Gordigiani, Portrait of a lady, 1880 circa, oil on canvas, signed
By Michele Gordigiani
Located in Florence, IT
The painting is signed on the bottom left: MGordigiani. It can be added to his mature production, as we can deduce from the clear Macchiaioli and Paris avant-guard influences, and wi...
Category

Giuseppe Miti-Zanetti
"Rembrandt Self-Portrait" Italian Oil on Canvas Circa 1885 by Giuseppe Zanetti , circa 1885

H 25.5 in. W 21 in. D 2 in.
Victorian 1800s period oil portrait painting of French minister of the colonies
By Jean Joseph Weerts
Located in Norwich, GB
A fine intimist portait of Florent Antoine Guillain (1844-1915) - the French maritime engineer who designed a major upgrade to the port of Dunkirk, and rose to a senior level in the ...
Category

H 13 in. W 9.45 in. D 0.4 in.
Young Woman with Straw Hat, French Female Portrait, Oil on Canvas, Signed, Frame
Located in Doylestown, PA
"Young Woman in Straw Hat" by Adolphe Piot is a 22" x 18" oil on canvas portrait painting. It is signed "A. Piot" in the lower right and it is in its original frame. Provenance: Pri...
Category

H 32 in. W 27 in. D 4 in.
Portrait of a Gentleman
Located in New Orleans, LA
I have such a high opinion of this portrait that I have held on to it for years without putting it up for sale. But the time has come. It's tragic the painter's name is lost, because...
Category

Portrait of a Gentleman

H 24.5 in. W 20 in.
Portrait of a Cavalier
By Cesare Auguste Detti
Located in New Orleans, LA
Italian painter Cesare Auguste Detti showcases his aptitude for intricate detail in this skillfully executed oil on canvas. The work captures the likeness of a cavalier in formal dre...
Category

Adriano Goby
Portrait Of A Young Woman , Circa 1890

H 28 in. W 27.5 in. D 3.5 in.
PERIOD American Antique Civil War Portrait of Officer and His Horse
Located in New York, NY
American artist Franklin Briscoe (1844-1903) known for his hirtorical and portrait paintings, paints a Civil War piece; it is a portrait of an officer with his white horse. The brus...
Category

Surely you’ll find the exact portraits late 19th century oil you’re seeking on 1stDibs — we’ve got a vast assortment for sale. In our selection of items, you can find Impressionist examples as well as a Post-Impressionist version. If you’re looking for a portraits late 19th century oil from a specific time period, our collection is diverse and broad-ranging, and you’ll find at least one that dates back to the 18th Century while another version may have been produced as recently as the 20th Century. If you’re looking to add a portraits late 19th century oil to create new energy in an otherwise neutral space in your home, you can find a work on 1stDibs that features elements of brown, black, gray, white and protectString (more). Finding an appealing portraits late 19th century oil — no matter the origin — is easy, but Michele Gordigiani, Aleardo Villa, Alexis Mérodack-Jeanneau, Antoine Calbet and Arthur Hill each produced popular versions that are worth a look. Frequently made by artists working in oil paint, paint and fabric, these artworks are unique and have attracted attention over the years.

How Much is a Portraits Late 19th Century Oil?