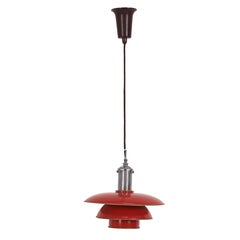 H 24 in. Dm 28 in.
Poul Henningsen Ph5 Pendant
By Louis Poulsen, Poul Henningsen
Located in Berkeley, CA
Poul Henningsen developed the PH 5 in 1958 as a follow-up to his celebrated three-shade system. The fixture emits both downward and lateral light, thus illuminating itself. Poul Henn...
Category

H 22.84 in. Dm 23.63 in.
Poul Henningsen Ph 3½-3 Pendant
By Poul Henningsen, Louis Poulsen
Located in Berkeley, CA
The fixture is 100% glare-free, with a design based on the principle of a reflective three-shade system, which directs most of the light downwards. The shades are made of deep drawn ...
Category

H 12 in. Dm 13 in.
Poul Henningsen "PH5" Ceiling Lights
By Poul Henningsen
Located in New York, NY
One of the most famous and sought after lights by Poul Henningsen, designed for Louis Poulsen, Denmark, this pair of matte white-enameled aluminum lamps are accentuated with royal bl...
Category

H 15.75 in. W 5.12 in. D 5.12 in.
Poul Henningsen PH 3½-3 Glass Pendant
By Louis Poulsen, Poul Henningsen
Located in Berkeley, CA
The fixture is designed based on the principle of a reflective three-shade system, which directs the majority of the light downwards. The shades are made of handblown opal three-laye...
Category

H 9.85 in. Dm 11.82 in.
Poul Henningsen Ph 5 Mini Pendant
By Louis Poulsen, Poul Henningsen
Located in Berkeley, CA
The fixture provides 100% glare-free light. Poul Henningsen developed the PH 5 in 1958 as a follow-up to his celebrated three-shade system. The fixture emits both downward and latera...
Category

H 23.63 in. Dm 23.63 in.
Poul Henningsen Ph 3½-2½ Table Lamp
By Poul Henningsen, Louis Poulsen
Located in Berkeley, CA
The louvre is 100% glare-free, with a design based on the principle of a reflective three-shade system, which directs most of the light downwards. For some variants, the top shade is...
Category

H 8.5 in. Dm 16 in.
Poul Henningsen Ph 4/3 Pendant
By Poul Henningsen, Louis Poulsen
Located in Berkeley, CA
The fixture is designed based on the principle of a reflective three-shade system, which directs the majority of the light downwards. The shades are made of metal and painted white t...
Category

Poul Henningsen 6 For Sale on 1stDibs

How Much is a Poul Henningsen 6?

A poul henningsen 6 can differ in price owing to various characteristics — the average selling price 1stDibs is $2,950, while the lowest priced sells for $275 and the highest can go for as much as $171,953.