H 11.82 in. W 74.81 in. D 31.5 in.
Poul Kjaerholm PK1
By Poul Kjærholm
Located in Los Angeles, CA
PK1 The Pk 1 series is a sequence of “FIRSTS” It marks the first in what would become a famous collaboration between the designer Poul Kjaerholm and Manufacturer E. Kold Christia...
Category 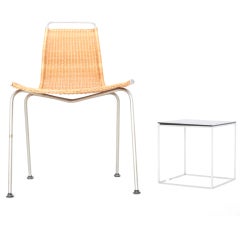 H 11.42 in. W 11.23 in.
Poul Kjaerholm PK71 bt E. Kold Christiansen
By Poul Kjærholm
Located in Los Angeles, CA
PK 71 sidetables The 71 tables are a departure for kjaerholm…these unusual tables were designed to be simplified versions of his more complex tables, crafted as 3 dimensional scul...
Category

H 6.5 in. W 10.5 in. D 32.5 in.
Poul Kjaerholm PK22 by E. Kold Christiansen
By Poul Kjærholm
Located in Los Angeles, CA
Introduced in 1956 the Kjaerholm PK 22 became an immediate commercial and critical success. The award winning design was not easy task; It tool Kjaerholm five years to develop the ...
Category

H 13 in. W 33.47 in. D 33.47 in.
Poul Kjaerholm PK80 daybed EKC, Denmark, 1957
By Poul Kjærholm
Located in Roosendaal, Noord Brabant
Iconinc daybed model PK80 designed by Poul Kjaerholm and manufactured by Ejvind Kold Christensen, Denmark, 1957. The daybed is in fantastic fully original condition, as this was from...
Category

H 28.75 in. W 24.81 in. D 24.81 in.
Poul Kjaerholm PK22 in Canvas
By Poul Kjærholm, Fritz Hansen
Located in Dronten, NL
This PK22 is from the 2006 limited edition one year production canvas series. Made by Fritz Hansen, marked with label and stamp.
Category

H 13 in. Dm 20.48 in.
Poul Kjaerholm PK61 Coffee Table Green Marble, Denmark, 1956
By Poul Kjærholm
Located in Roosendaal, Noord Brabant
This is for one of the most iconic designs by Poul Kjaerholm, this coffee table model PK61 designed for E Kold Christensen, Denmark, 1956. This original old EKC table with solid flat...
Category

How Much is a Poul Kjaerholm Pk9?

Kjærholm’s signal design was the PK22 chair of 1956, a low-slung leather lounger on a steel base. The ideas introduced in the PK22 — Kjærholm’s designs were named using a numeric system devised with his manufacturer, E. Kold Christensen — were refined throughout his career, as the offerings below show: the PK11 chair of 1957, with back and armrests formed by a semicircle of ash; the capacious, richly patinated leather seat of a vintage 1961 PK9 chair; the elegant rattan swoop of the PK 24 chaise longue (1965). The chaise longue's leather headrest, held in place by a steel counterweight, best shows Kjærholm's particular gift for combining technological advancements with a respect for traditional detailing. While respectful of the past, Poul Kjærholm's sensibility is one of optimism and expectation. His was design for those who lived with verve and élan, and confidently anticipated the future.