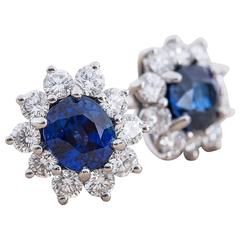 Free Shipping
W .50 in. L .75 in.
Tiffany & Co. Platinum Diamond and Sapphire Victoria Necklace
By Tiffany & Co.
Located in London, GB
A dainty platinum diamond and sapphire Tiffany & Co. necklace from the Victoria collection. The necklace comprises of 4 marquise cut diamonds in a clawed setting with a round brillia...
Category

Free Shipping
Tiffany & Co. Art Deco Sapphire Diamond Platinum Watch Clip
By Tiffany & Co.
Located in Beverly Hills, CA
The art deco time was a transition of style that was also known as modernism. Clean flowing lines of symmetry is what defined the artistic movement. Tiffany during this time was one ...
Category

Surely you’ll find the exact tiffany co sapphire diamond you’re seeking on 1stDibs — we’ve got a vast assortment for sale. Every item for sale was constructed with extraordinary care, often using Gold, Platinum and 18k Gold. In our selection of items, you can find a vintage example as well as a contemporary version. If you’re looking for a tiffany co sapphire diamond from a specific time period, our collection is diverse and broad-ranging, and you’ll find at least one that dates back to the 19th Century while another version may have been produced as recently as the 21st Century. For this particular accessory, there are many different carat weights to choose from, but .5 Carat and 1 Carat versions are of considerable interest. See these pages for a round cut iteration of this accessory, while there are also brilliant cut cut and emerald cut cut versions available here, too. There aren’t many items for men if you’re seeking a tiffany co sapphire diamond, as most of the options available are for women and unisex.

How Much is a Tiffany Co Sapphire Diamond?

Prices for a tiffany co sapphire diamond can differ depending upon size, time period and other attributes — at 1stDibs, these accessories begin at $1,595 and can go as high as $1,595, while this accessory, on average, fetches $9,103.