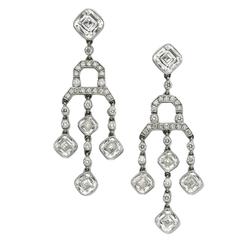 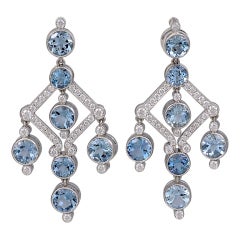 L 1.50 in.
Tiffany & Co. Platinum Legacy Diamond Chandelier Drop Earrings
By Tiffany & Co.
Located in Bishop's Stortford, Hertfordshire
These Earrings by Tiffany are from their Legacy Collection and feature One Hundred and Eight Round Brilliant Cut Diamonds Totalling 2.32cts G Colour VS Clarity Mounted in a Platinum ...
Category

Free Shipping
W 0.48 in. L 1.89 in.
Tiffany & Co. Platinum Legacy Diamond Chandelier Drop Earrings
By Tiffany & Co.
Located in Bishop's Stortford, Hertfordshire
These Earrings by Tiffany are from their Legacy Collection and feature One Hundred and Eight Round Brilliant Cut Diamonds Totalling 2.32cts G Colour VS Clarity Mounted in a Platinum ...
Category

W .63 in. L 1.63 in.
Tiffany & Co. Diamond and Aquamarine Jazz Chevron Earrings
By Tiffany & Co.
Located in London, GB
A beautiful pair of platinum diamond and aquamarine Tiffany & Co. chevron earrings from the Jazz collection. The earrings are comprised of a chandelier style with round brilliant cut...
Category

Tiffany & Co. Platinum Diamond Chandelier Earrings
By Tiffany & Co.
Located in Dallas, TX
This absolutely stunning pair of Tiffany & Co. floral motif dangle earrings are made from platinum and 4.15 CTW of diamonds. Nine flowers create a diamond shape that dangles from the...
Category

You are likely to find exactly the tiffany diamond chandelier you’re looking for on 1stDibs, as there is a broad range for sale. Each design created in this style — which was crafted with great care and often made from Platinum — can elevate any look. Our collection of these items for sale includes 11 vintage editions and 12 modern creations to choose from as well. If you’re looking for a tiffany diamond chandelier from a specific time period, our collection is diverse and broad-ranging, and you’ll find at least one that dates back to the 20th Century while another version may have been produced as recently as the 21st Century. For this particular piece, 1.5 Carat and 2 Carat are consistently popular carat weights. A tiffany diamond chandelier can be a stylish choice for most occasions, but Diamond rings, from our inventory of 16, can add a particularly distinctive touch to your look, day or night. Today, if you’re looking for a round cut version of this piece and are unable to find the perfect match, our selection also includes alternatives. There aren’t many items for men if you’re seeking a tiffany diamond chandelier, as most of the options available are for women and unisex.

How Much is a Tiffany Diamond Chandelier?

Finding the Right Chandelier Earrings for You

Antique and vintage chandelier earrings, as their name implies, are decorative wide pendants lit up with gems. The most coveted are set with diamonds, but there are stunners in gold and pearls as well as enamel.

The accessory is a well-known object of desire — Kate Middleton, the Duchess of Cambridge, is an enthusiast of diamond chandelier earrings. She’s borrowed them from Queen Elizabeth II, who received the jewels from her father, King George IV, as a wedding gift when she was a princess.

Fine jewelry examples from the Georgian, Victorian and Edwardian eras are eternally on the wish lists of fashionable romantics — the types who would toss on these jewels with a T-shirt and jeans as easily as with a floral gown. And while earrings of any kind are the best type of jewelry to give or receive, chandelier earrings are popular and rather imposing — they embody movement and elevate individual style.

Browse antique and vintage chandelier earrings on 1stDibs today. Find a variety of these accessories in our collection of fashion jewelry, too.