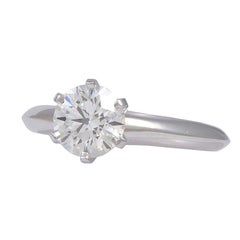 Tiffany & Co. Single Stone Diamond Engagement Ring
By Tiffany & Co.
Located in London, GB
This Tiffany & Co engagement ring features a 0.19 carat round brilliant diamond. It has been certified by Tiffany & Co as an E colour and VS1 in clarity. The ring has the Tiffany & C...
Category

Tiffany & Co 0.42 Carat Diamond Solitaire Engagement Ring
By Tiffany & Co.
Located in London, GB
This second-hand designer ring is in mint condition. It is a Tiffany & Co engagement ring with a sparkling 0.42 carat diamond. The round brilliant has been certified by Tiffany & Co ...
Category

Tiffany & Co. Classic Diamond Solitaire Engagement Ring
By Tiffany & Co.
Located in London, GB
This Tiffany & Co engagement is a high popular design. The diamond in the centre weighs 0.40 carat and is of the highest quality. Graded, with a Tiffany & Co certificate as E in colo...
Category

Tiffany & Co 0.45 Carat Diamond Solitaire Ring
By Tiffany & Co.
Located in London, GB
This classic Tiffany & Co engagement ring features a 0.45 carat round brilliant diamond. It is a sparkling stone, estimated as G in colour and VS1 in clarity. The diamond is expertl...
Category

Tiffany & Co. Diamond Harmony Solitaire Ring Modern
By Tiffany & Co.
Located in London, GB
This is a wonderful second hand, Tiffany & Co engagement ring, which boasts a wonderful centre stone weighing 1.14 carat. The clarity is graded VS2 and the colour E, which is graded ...
Category

Free Shipping
Tiffany & Co. 0.57ct Round I VS1 Diamond Solitaire Engagement Ring, 18kt Rose
By Tiffany & Co.
Located in Houston, TX
This precious Tiffany & Co. engagement ring features a dainty 0.57ct round brilliant cut diamond, I VS1. The diamond is placed in a platinum setting and an 18kt rose gold engagement ...
Category

Solitaire Diamond Platinum Engagement Ring by Tiffany & Co.
By Tiffany & Co.
Located in San Francisco, CA
One of the classic elements of design from Tiffany & Co is understated elegance, and this solitaire beauty is no exception. The center round brilliant cut diamond weighs .63 carats a...
Category

Tiffany & Co. Classic Diamond Platinum Solitaire Engagement Ring
By Tiffany & Co.
Located in Atlanta, GA
If it's true that simplicity is sophisticated, then this ring embodies elegance at its finest! The ring combines a princess cut shape but with the sparkle of a round brilliant stone....
Category

Tiffany & Co. 5 Carat Oval Diamond Engagement Solitaire Platinum Ring
By Tiffany & Co.
Located in Rome, IT
Masterfully cut and worked, this 5 carat oval is proof that, underwater from size, a large extraordinary Tiffany diamond always sounds brighter than the others. The elegant and del...
Category

Get Updated with New Arrivals
Save "Tiffany T Engagement Ring", and we’ll notify you when there are new listings in this category.

On 1stDibs, you can find the most appropriate tiffany t engagement ring for your needs in our varied inventory. Every item for sale was constructed with extraordinary care, often using Platinum, Gold and 18k Gold. Find an antique version now, or shop for 436 vintage or 1227 modern creation for a more contemporary example of these cherished accessories. Making the right choice when shopping for a tiffany t engagement ring may mean carefully reviewing examples of this item dating from different eras — you can find an early iteration of this piece from the 19th Century and a newer version made as recently as the 21st Century, both of which have proven very popular over the years. For this particular accessory, there are many different carat weights to choose from, but .5 Carat and 1 Carat versions are of considerable interest. A round cut version of this piece has appeal, but there are also cushion cut and princess cut versions for sale. If you’re browsing our inventory for a tiffany t engagement ring, you’ll find that many are available today for women, but there are still pieces to choose from for unisex and men.

How Much is a Tiffany T Engagement Ring?

Prices for a tiffany t engagement ring can differ depending upon size, time period and other attributes — at 1stDibs, these accessories begin at $690 and can go as high as $3,200,000, while this accessory, on average, fetches $9,901.

Finding the Right Engagement Rings for You

Shopping for the right antique, new or vintage engagement ring can prove daunting.

Whether you’re looking for that perfect Art Deco engagement ring, an antique Edwardian period engagement ring or a fashionable contemporary alternative, it’s important to choose a style that speaks to you.

Rings have long been signifiers of marriage and committed relationships. The modern diamond engagement ring can be traced back to 1477, when Archduke Maximilian of Austria commissioned an expensive diamond ring for his betrothed. Diamond rings subsequently became extremely popular among the European aristocracy. Later, during the Victorian era, the popularity of diamond engagement rings had filtered down to the middle class, owing to the increasing accessibility — and affordability — of gold and diamonds.

Edwardian and, afterward, Art Deco engagement rings that followed in the wake of Queen Victoria’s death in 1901 would be characterized by complex, geometric designs and platinum settings. Owing to the Art Nouveau movement, nature was a major theme for Edwardian jewelry, while the diamond ring designs of the Art Deco period were inspired by Cubism as well as ancient Egypt. Art Deco engagement rings are bold and colorful and feature gems cut in nontraditional ways.

Engagement rings designed after World War II were intended to be simpler and focused on the beauty of the diamond. In 1947, De Beers Consolidated Mines, with the support of Philadelphia agency N.W. Ayer & Son, introduced the slogan “A diamond is forever” in a marketing campaign that emphasized a connection between diamonds and romance. Diamond sales skyrocketed, and diamond engagement rings became intertwined with the post–World War II marriage boom — which coincided with the ascension of specific diamond cuts. The round brilliant cut, which consists of an astounding 58 facets, continues to be the most popular cut to this day. Jewelers such as Harry Winston had already gained a reputation for his talents by the time the De Beers campaign debuted, and he is said to have favored emerald-cut diamonds.

For everything from understanding the 4Cs to choosing between antique, vintage, contemporary and custom styles, get expert tips to help you find just the right ring — see our engagement ring buying guide.

When you're ready to mark your momentous occasion, find a vast collection of engagement rings on 1stDibs.