H 32 in. W 28 in. D 32 in.
Avalon club chair
By Michael Bagley
Located in Bronx, NY
Inspired from a Lodge chair from the 40's, The Avalon is the more masculine chair from the Francophile Collection. Its tight back, loose seat combination make it very comfortable an...
Category 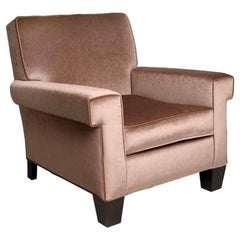 H 33.5 in. W 33 in. D 33 in.
Glamorous Club Chair
Located in Sagaponack, NY
An armchair with a carved skirt and scroll arms with a faux nickel lacquer.
Category

H 40.5 in. W 28.5 in. D 33 in.
Solid Brass Club Chairs
By Maria Pergay
Located in Toronto, Ontario
An incredible pair of solid brass (not plated) club chairs. Very architectural. These belong on the cover of AD. Upholstered in a faux ostrich skin but can easily be reupholstere...
Category

H 27 in. W 28 in. D 29 in.
Pair Ernst Schwadron Club Chairs
By Ernst Schwadron
Located in New York, NY
Rare pair of Ernst Schwadron design for Rena Rosenthal club chairs. These chairs are in good original condition, usable as is, however the fabric shows some wear, or reupholster to t...
Category

H 31 in. W 27 in. D 24 in.
French Leather Club Chair
Located in Sheffield, MA
Circa 1930 - French leather club chair is pristine condition and very comfortable. Dimensions are not too large,just perfect! We have not bought a better, quality and condition chair...
Category

H 37 in. W 39 in. D 31 in.
Pair of Art Deco Club Chairs
By René Joubert and Philippe Petit, D.I.M. Decoration Intérieure Moderne
Located in North Miami, FL
A pair of rosewood Art Deco chairs designed by DIM (Joubert et Petit). Made in France, circa 1935 Decoration Interieure Modernes (DIM) The firm was established in 1919 by Rene ...
Category

H 32.5 in. W 24 in. D 24 in.
Club Chair by Henredon
Located in Pasadena, CA
Pair of club chairs by Henredon. Upholstered in linen.
Category

H 31.5 in. W 24 in. D 26.5 in.
Club Chair with Bronze Base & Cutouts
Located in Palm Desert, CA
A unique club chair with bronze base and inserts in dark charcoal nubuck leather. Dated 1938 and labeled "Mandel Bros Chicago" it is rumored to have been used on a luxury railcar.
Category

Vintage Tufted Blue Club Chair
Located in Brooklyn, NY
This fabulous vintage blue club chair features a tufted back rest, wooden base and is covered in a comfy blue fabric. This chair would be a great addition to any lounge space. Ple...
Category

H 33 in. W 27 in. D 37 in.
Pair of Leather Art Deco Club Chairs
Located in Los Angeles, CA
An extraordinary pair of art deco-style lounge chairs are hand-crafted out of wood and leather combination, are in great condition, and have been professionally restored by our craft...
Category

How Much is a Vintage Club C?

A vintage club c can differ in price owing to various characteristics — the average selling price 1stDibs is $3,898, while the lowest priced sells for $1 and the highest can go for as much as $198,000.