The work of celebrated mid-century Italian lighting designer and entrepreneur Angelo Gaetano Sciolari became widely popular in the United States during the postwar years and strongly influenced lighting makers around the world. The sculptural forms and striking geometric details of his vintage floor lamps, chandeliers and other fixtures fit seamlessly into the mid-century modern and Hollywood Regency interiors of the day.

Sciolari formally studied architecture but also pursued filmmaking for a short period. When his father passed away in 1949, Sciolari took the reins at his family's company, Sciolari Lighting, which had been in business in Rome since 1892. The manufacturer expanded considerably under Gaetano’s leadership. For one, pioneering American lighting company Lightolier, in New York City, began to import the Italian brand’s lighting for the U.S. market, and Lightolier’s star designer, Gerald Thurston, was significantly influenced by Gaetano’s work. In the 1970s, Americans looking to add provocative fixtures created by Gaetano Sciolari to their living rooms could find them in Lightolier catalogs.

Sciolari initially crafted lamps and sconces that bore the hallmarks of traditional Italian design. But during the 1950s, when he would become the in-house designer for legendary Milan lighting manufacturer Stilnovo — one of the leaders of Italian postwar design — he created revolutionary fixtures that endured as his best-known work.

Sciolari drew on a range of influences — enthusiasts see the imprint of Art Deco, brutalism and more in his lighting — and designed futuristic Space Age chandeliers, ceiling lamps and pendants for Stilnovo as well as Stilkronen and S.A. Boulanger that defied the conventions of the time. A dizzying array of materials and finishes characterizes the designer’s work, while geometry is pronounced in each sculptural fixture — there are blown opal glass spheres, polished chrome tubes and brass square bulb holders. These combinations were critical to the development of dazzling lighting that proves eye-catching in any space decades later.

Cubist Polished Brass Gaetano Sciolari Wall Sconce
By Gaetano Sciolari
Located in Saint-Ouen, IDF
Cubist wall sconce by Gaetano Sciolari made of square tubes geometrically assembled from which come out six sources of light. Can also be attached to the ceiling as a flush mount. O...
Category

H 21.66 in. W 13 in. D 55.12 in.
Pair of Brass and Smoke Glass Sconces, Sciolari, Italy, 1960s
By Gaetano Sciolari
Located in Aachen, NRW
Pair of wall sconces in the manner of Sciolari, Italy, 1960s. Each sconce is composed of one smoked glass with a brass base. High quality and in very good condition. Cleaned, wel...
Category

H 5.91 in. W 13.78 in. D 13.78 in.
Gaetano Sciolari for Lightolier "Skyscraper" Glass Rod and Brass Chandelier
By Lightolier, Gaetano Sciolari
Located in Highland, IN
This striking Sciolari flush-mounted chandelier by Lightolier has five square groupings of cascading glass rods in two tiers which surround the lights and reminds us of an inverted s...
Category

H 25.5 in. Dm 19 in.
Sciolari Brass and Faux Tortoise Lucite Table Lamp Vintage, Italy, 1970s
By Gaetano Sciolari
Located in Rome, IT
This unique piece by the Italian designer Sciolari is signed on the bottom of the lamp by the proprietary brand, as the photos show. The lamp hat is hexagonal and is made of brass an...
Category 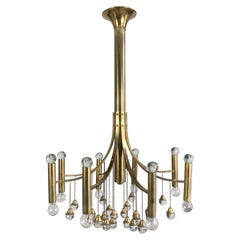 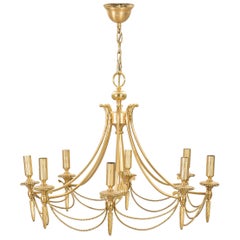 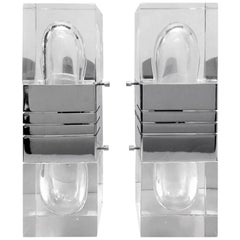 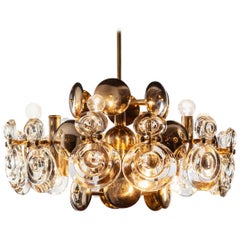 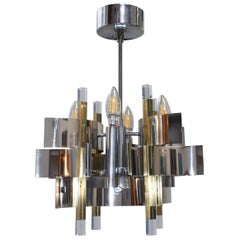 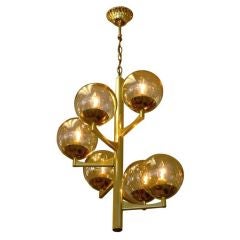 Gaetano Sciolari furniture is available for sale on 1stDibs. These distinctive objects are frequently made of metal and designed with extraordinary care. There are many options in our Gaetano Sciolari collection of furniture, although brown editions of this piece are particularly popular.. In-stock of these items we have 682 vintage editions, while there is also 0 modern edition to choose from. Many of the original furniture by Gaetano Sciolari were created in Europe during the 20th century in the Mid-Century Modern style. If you are looking for additional options, many customers also consider furniture by Carlo Nason, Stilnovo and Barovier & Toso. Prices for Gaetano Sciolari furniture can vary depending on size, time period and other attributes. The price for these items starts at US$287 and tops out at US$53,500, while pieces like these can sell for US$2,756 on average..