George Yepes was born in Tijuana, Mexico, in 1956 and raised in East Los Angeles, California. Growing up around neighborhood gangs, he eventually became part of their influence and violence. Thanks to his mother’s strict upbringing and her commitment to ensuring that, Yepes attended only the best catholic schools he kept on track academically. Then, at age ten, he discovered his first paint set in the same streets of LA that had brought him so much conflict. Later at age eighteen, Yepes began expressing himself with the brush on a grand scale, his emotions exploding into huge mural works of art. Yepes is now known as one of the painters from the Chicano Mural Movement of the late 1970s and has left his stylistic mark all over Los Angeles’ rich tapestry of visual culture; with 28 murals around the City of Angels. It was during this time early in his career that one of Yepes’ paintings titled La Pistola y El Corazon was selected to grace the album cover for the Latin Rock band “Los Lobos” in 1988. The cover went on to win numerous awards (including “The 100 Best Album Covers of All Time” by the editors of Rolling Stone Magazine). The painting itself was acquired by Sean Penn and Madonna. Over the years Yepes’ paintings were acquired by many of Hollywood’s elite. Many became friends with Yepes, including Robert Rodriguez, Quentin Tarantino, and Josh Brolin. Some like Salma Hayek, Eva Longoria, and Patricia Arquette became models for the artist. For his solo exhibit at Monarch Arredon Contemporary, Yepes has selected a variety of genres. 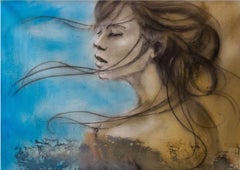 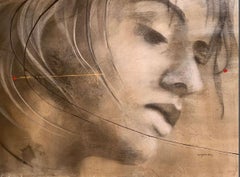