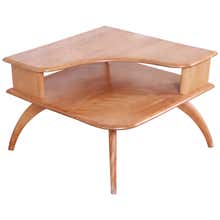 Committed to the new style, Heywood-Wakefield commissioned work from an assortment of like-minded designers, including Alfons Bach, W. Joseph Carr, Leo Jiranek and Count Alexis de Sakhnoffsky, a Russian nobleman who had made his name in Europe creating elegant automotive body designs. In 1936, the company introduced its “Streamline Modern” group of furnishings, presenting a look that would define the company’s wares for another 30 years. The buoyantly bright, blond wood — maple initially, later birch — came in finishes such as amber “wheat” and pink-tinted “champagne.” The forms of the pieces, at once light and substantial, with softly contoured edges and little adornment beyond artful drawer pulls and knobs, were featured in lines with names such as “Sculptura,” “Crescendo” and “Coronet.” It was forward-looking, optimistic and built to last — a draw for middle-class buyers in the Baby Boom years. 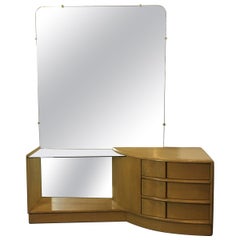 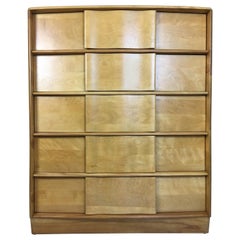