H 79.53 in. Dm 23.63 in.
Mid-Century Modern Table Lamps, Brass and Bamboo
Located in Opa Locka, FL
Pair of table lamps, brass plated metal and bamboo. Existing shades have some spots and will be replaced by seller.
Category

H 59 in. Dm 11 in.
Large Mid-Century Modern Brass and Bamboo Table Lamp
By Paolo Traversi
Located in amstelveen, NL
Beautiful table lamp with brass details in the style of Vivai del Sud. The lamp is designed and made by Traversi Milano in the 1970s.
Category 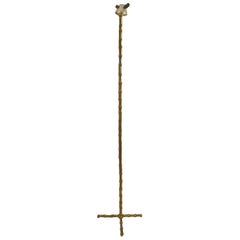 H 25 in. W 7 in. D 7 in.
Mid-Century Rupert Nikoll Bamboo Brass Table Lamp, Austria, 1950s
By Rupert Nikoll, Werkstätte Carl Auböck
Located in Vienna, AT
A beautiful modernist table lamp from the 1950s, executed by Rupert Nikoll Austria. Has a beautiful bamboo neck and a two-leg brass base and its original, refurbished lampshade. In g...
Category

H 62 in. W 14 in. D 14 in.
1950s Rupert Nikoll Mid-Century Bamboo Brass Table Lamp, Austria, 1950s
By Rupert Nikoll
Located in Vienna, AT
A very beautiful modernist table lamp from the 1950s, executed by Rupert Nikoll Austria. Has a beautiful bamboo neck and a two-leg brass base and its original, refurbished lampshade....
Category

H 33 in. W 9 in. D 8 in.
Bamboo, Rattan and Cotton Mid-Century Lamp in the Style of Louis Sognot
By Louis Sognot
Located in London, GB
A mid-century floor or table lamp in natural neutral tones, made of bamboo, rattan and cotton. A delicate design, which creates a mellow glow through the neutral fabric. No maker's m...
Category

Bamboo, Rattan and Cotton Mid-Century Lamp in the Style of Louis Sognot

H 57 in. W 16 in. D 16 in.
Mid Century Modern Floor Lamp Brass Bamboo by Rupert Nikoll, Austria circa 1950
Located in Vienna, AT
Mid century modern vintage floor lamp, which has a curved bamboo stem and a brass claw foot. Also the floor lamp is equipped with a renewed lamp shade covered with butter cream texti...
Category

H 61.03 in. Dm 14.57 in.
Mid-Century Pair of Brass Table Lamps with Bamboo Motif
Located in Palm Beach, FL
Vogue pair of brass table lamps that have a stylized rectangular shape and inscribed with bamboo or palm tree designs on the front. Hand polished and lacquered for easy care.
Category

H 29.5 in. W 7.5 in. D 4.5 in.
Mid-Century Modern Nautical Ceramic Table Lamp Enfold In Bamboo & Rope 1970s
Located in Miami, FL
Very unique 1970s nautical Mid-Century Modern ceramic table lamp enfold in bamboo and rope. All in all handmade and fits in any interior. Wired for the US and uses 1 regular light ...
Category

H 62 in. Dm 16 in.
Bamboo and Rope Floor Lamp
By Adrien Audoux and Frida Minet
Located in Isle Sur Sorgue, FR
Handmade bamboo and rope floor lamp. Perfect height for putting next to a sofa or even bedside. Simple and natural decoration with warm cosy light.
Category

H 0.4 in. W 0.4 in. D 0.4 in.
Pair of Bamboo Motif Floor Lamps
Located in New York, NY
Pair of brass faux bamboo floor lamps with bamboo shades and travertine details at base.
Category

How Much is a Mid Century Bamboo Lamp?

Prices for a mid century bamboo lamp can differ depending upon size, time period and other attributes — at 1stDibs, they begin at $1 and can go as high as $67,553, while the average can fetch as much as $2,334.