W 67.33 in. L 100.4 in.
Handmade Vintage Romanian Bessarabian Kilim, 1950s, 1P10
Located in Bordeaux, FR
Handmade vintage Bessarabian kilim from Romania in white and blue colours. Vegetable dyes, the rug is in original good condition, made in the middle of 20th century -Condition: or...
Category 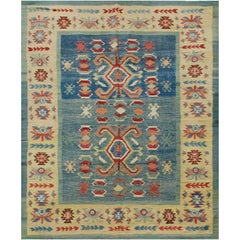 W 157.88 in. L 190.16 in.
Vintage Bessarabian Kilim Black Green and Pink Romanian Wool Flat-Weave Rug
Located in Long Island City, NY
Originating circa 1950-1960 as a vintage Bessarabian flat-weave Kilim, the style of this piece is distinctly Romanian, a country famed as the origin of some of the most celebrated Be...
Category

W 92 in. L 135 in.
Handwoven Vintage Bessarabian Kilim Rug in Beige-Brown, Green Floral Pattern
Located in Long Island City, NY
Handwoven in wool originating from Romania circa 1970-1980, a vintage 13x17 Kilim in Bessarabian style. An exceptional piece from a reputed workshop, this flatweave witnesses an all ...
Category

W 158 in. L 200 in.
Bessarabian Kilim, South Eastern Europe, circa 1920
Located in Egerton, Kent
Bessarabian kilims, woven to the north of the Black Sea in current-day Romania and Moldova, were influenced by French Aubusson carpets and made for the Russian market. However, unlik...
Category

W 115 in. L 90 in.
Antique Romanian Bessarabian Kilim
Located in New York, NY
This splendid antique Bessarabian kilim showcases a stunning assortment of age-old motifs that represent an elegant melding of cultures and an extension of ancient Caucasian weaving ...
Category

W 53 in. L 96 in.
Antique Bessarabian Rug
By Bessarabian
Located in New York, NY
Famous for their carpets in the baroque and neoclassical styles, this Bessarabian rug hearkens back to the roots of tribal carpet weaving in Romanian and the Caucasus with bold, clea...
Category

Romanian Bessarabian For Sale on 1stDibs

How Much is a Romanian Bessarabian?