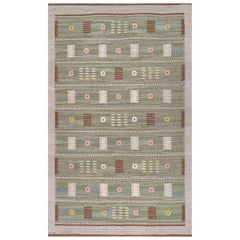 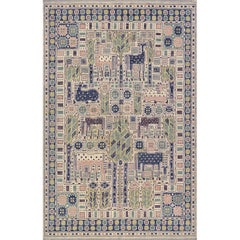 W 96 in. L 130 in.
Signed Mid-Century Wool Handwoven Swedish Rug
By Märta Måås-Fjetterström, Barbro Lundberg-Nilsson
Located in West Hollywood, CA
This Mid-Century Swedish rug has a shaded blue field with a central column of linked chocolate brown and dark-brown sharp lozenges flanked at each side by similarly colored part-loze...
Category

W 80 in. L 118 in.
Mid-20th Century Handwoven Wool Swedish Rug
By Märta Måås-Fjetterström
Located in West Hollywood, CA
This signed Swedish rug has a chocolate-brown field with an outer band of polychrome octogen lozenges and a similar spaced band of lozenges around a moss-green rectangular panel with...
Category

W 97 in. L 99 in.
Large Scandinavian Swedish Rug with Repeating All-Over Diamond Design
By Keivan Woven Arts
Located in Atlanta, GA
Measures: 9'5'' x 11'5''. This Scandinavian flat-weave patterned rug is inspired by the work of Swedish textile designers of the early to mid-20th century. With a unique blend of his...
Category

Sweden Rug For Sale on 1stDibs

Find many varieties of an authentic Sweden rug available at 1stDibs. A Sweden rug — often made from fabric, wool and linen — can elevate any home. Find 2093 options for an antique or vintage Sweden rug now, or shop our selection of 265 modern versions for a more contemporary example of this long-cherished piece. Whether you’re looking for an older or newer Sweden rug, there are earlier versions available from the 18th Century and newer variations made as recently as the 21st Century. A Sweden rug is a generally popular piece of furniture, but those created in Scandinavian Modern, Mid-Century Modern and Art Deco styles are sought with frequency. A well-made Sweden rug has long been a part of the offerings for many furniture designers and manufacturers, but those produced by Märta Måås-Fjetterström, Ingegerd Silow and Barbro Lundberg-Nilsson are consistently popular.

How Much is a Sweden Rug?