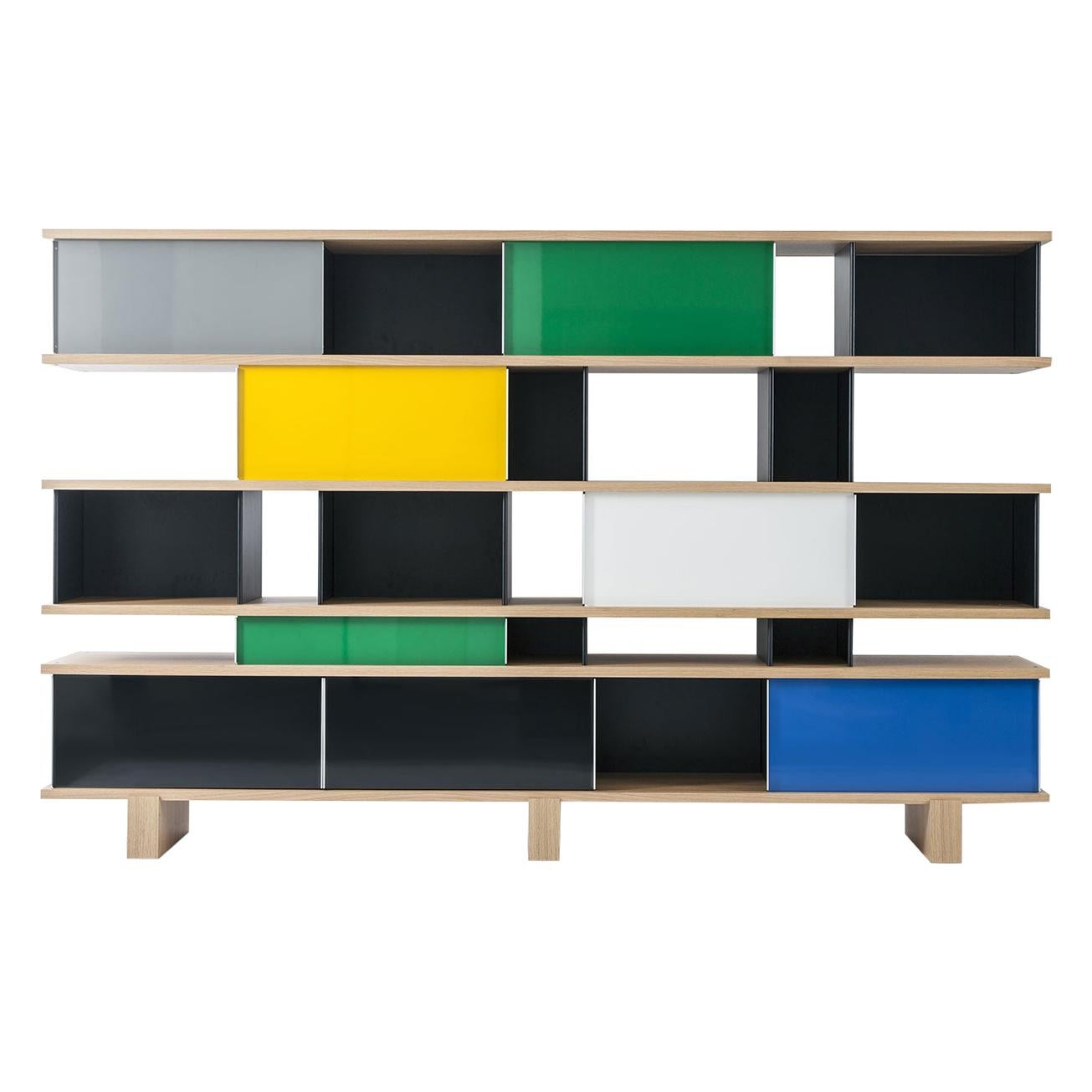 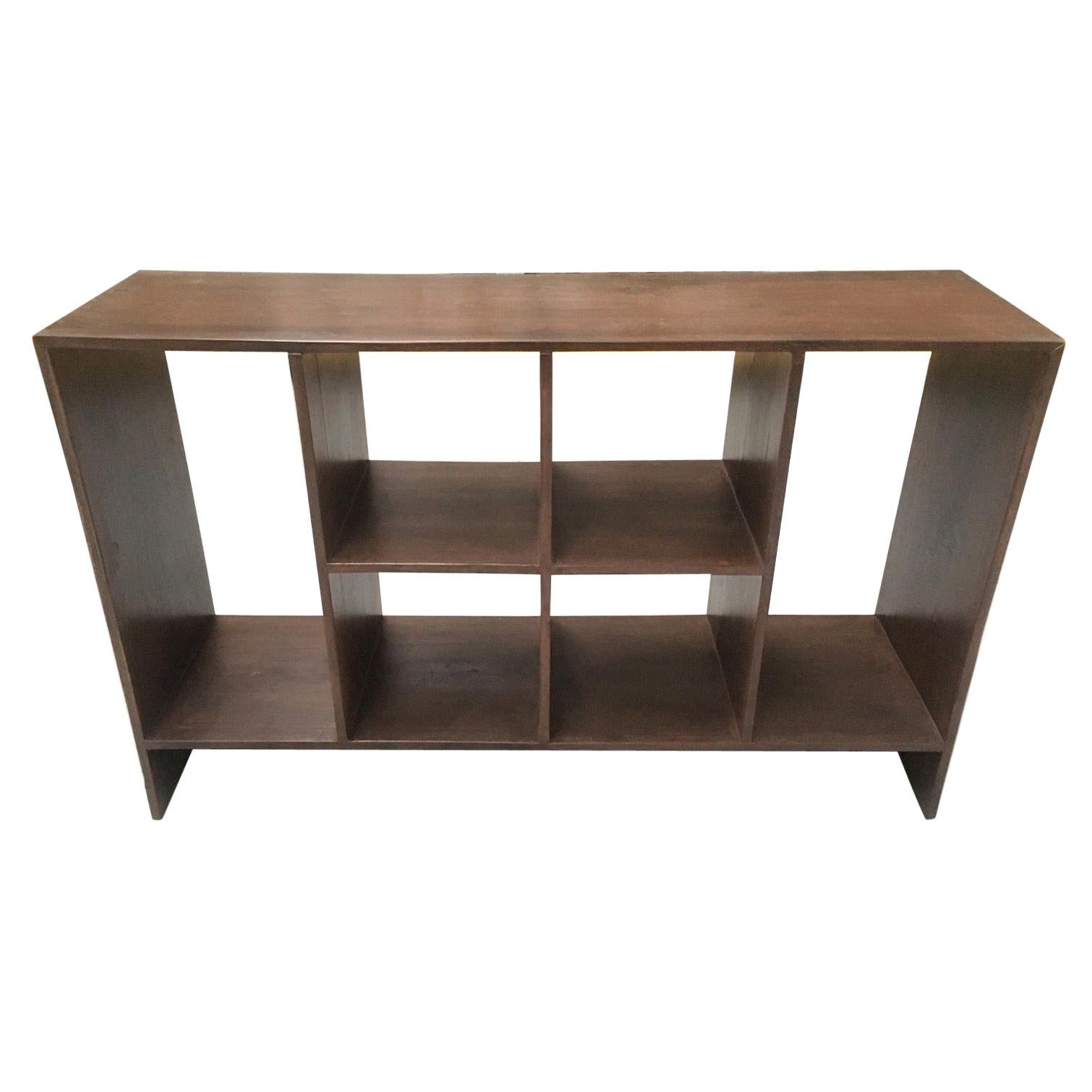 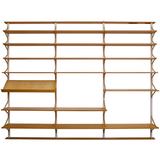 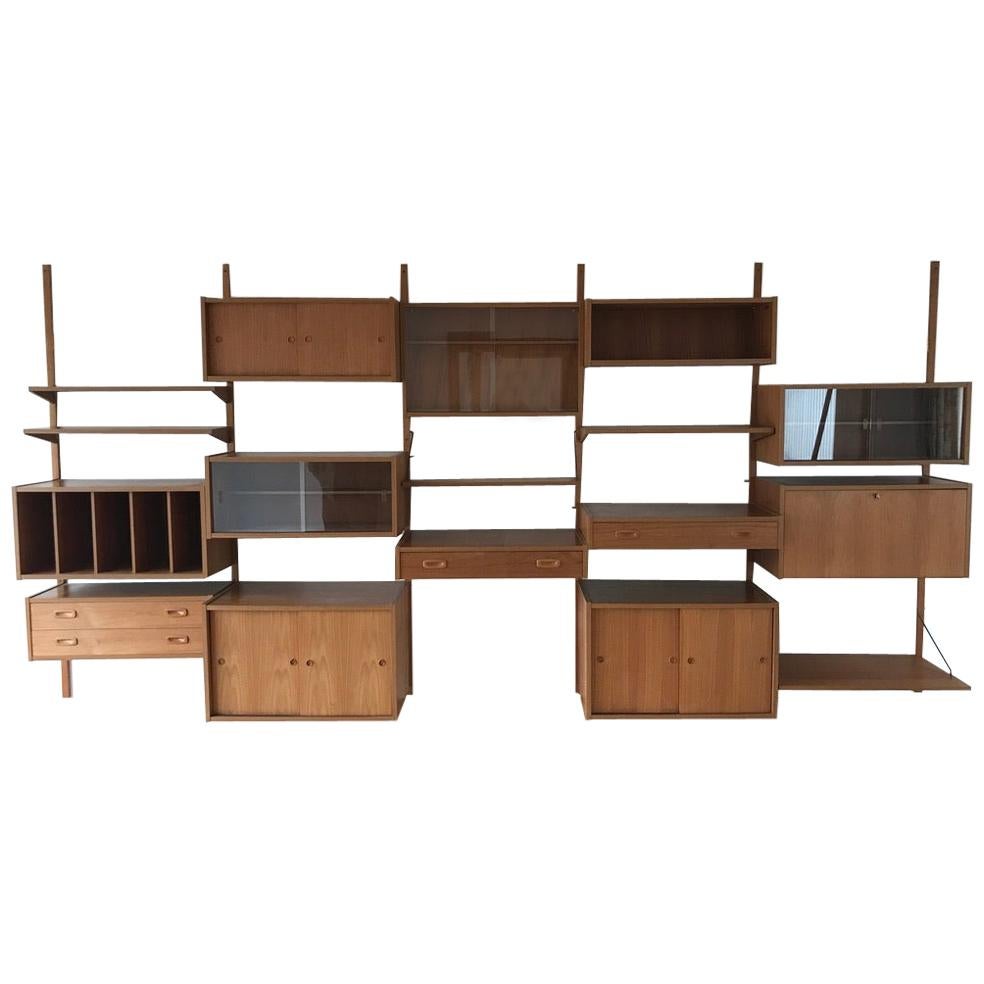 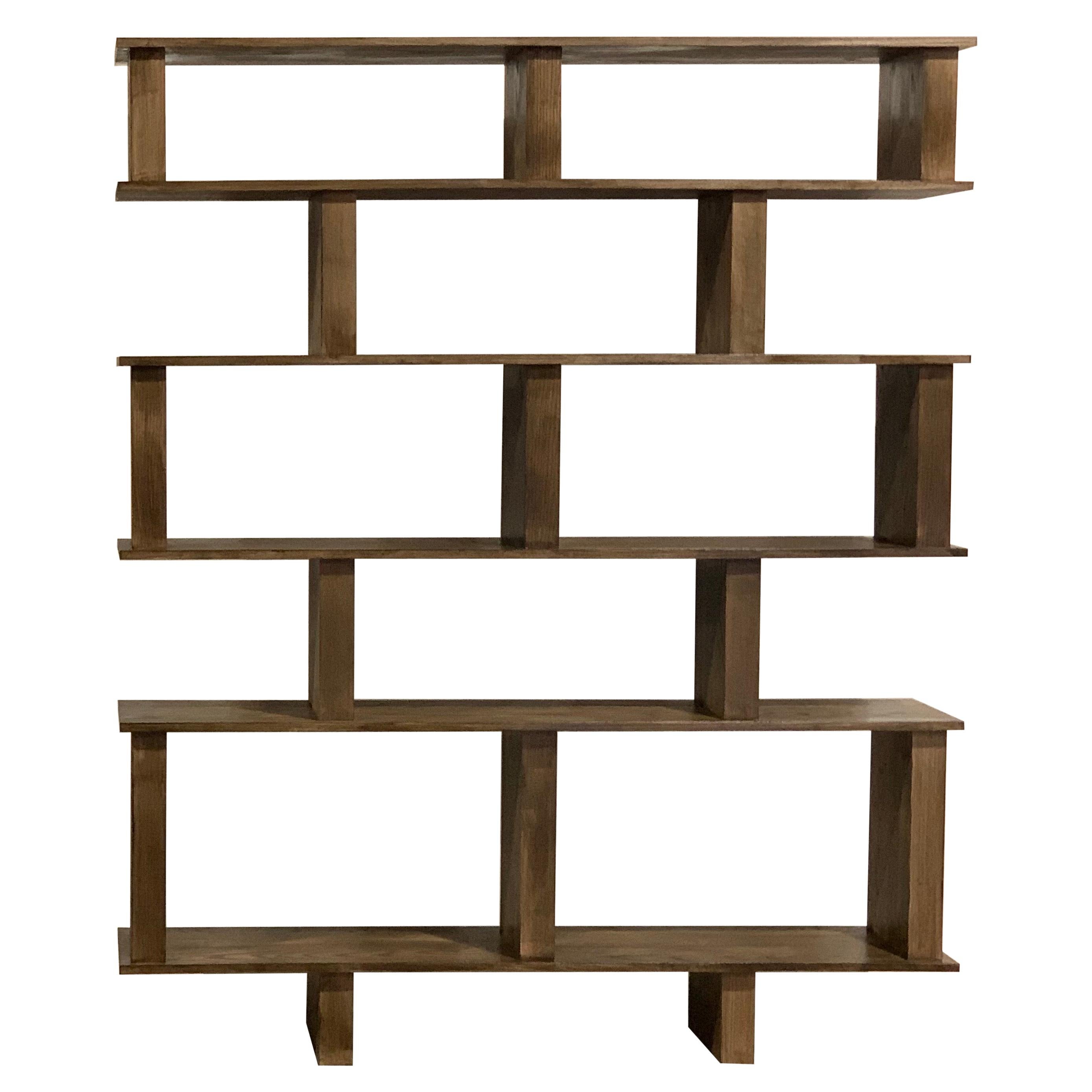 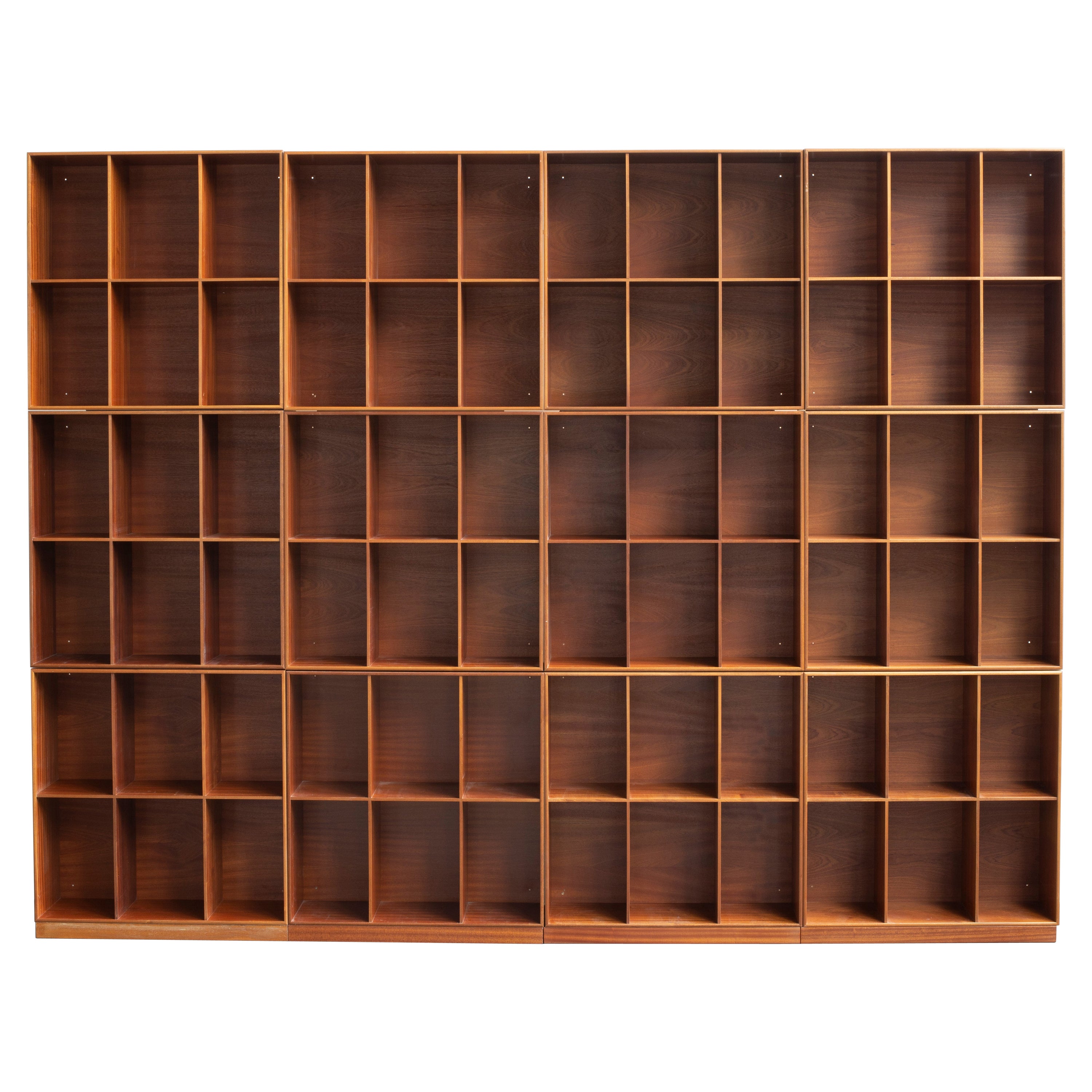 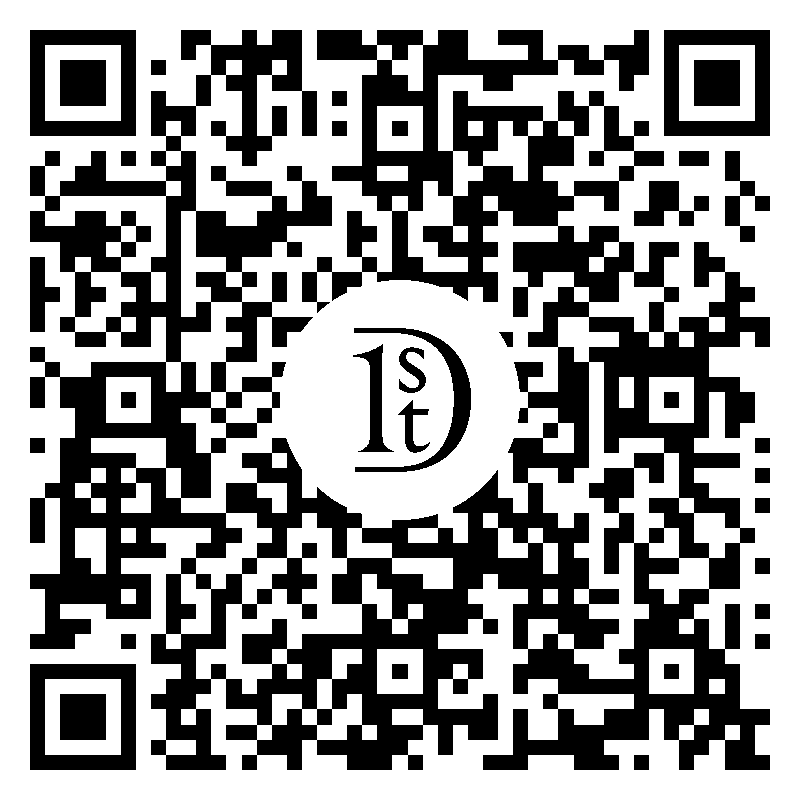 Rare wall shelf unit by Florence Knoll. Made by Knoll International, Stuttgart in 1952. Cabinets and shelves are made of teak. The interiors are veneered with maple. Cabinet fronts in white. The doors of the cabinet modules elegantly sink into the bottom of the slopes after opening, which also allows for permanently open use - since no doors protrude into the room. The shelves are each variable in height. The wall panels are covered with sea grass (the fourth panel is present, but not visible in the photos - you can also omit the panels and then have as a background the color of your respective wall). The panels are simply inserted between the vertical aluminum strips - the complete shelving system is very easy and intuitive to assemble! The upper part of the shelf is illuminated. We have mounted daylight fluorescent tubes, these are available as standard illuminants in normal trade. The condition is very nice for a furniture almost 70 years old, there are normal signs of use. There is an additional shelf that is included. 1x shelf board: 28cm deep & 65cm wide 1x cabinet: 40cm deep, 65cm wide & 47cm high Dear interior designers, architects and of course all other interested parties - due to the image compression of 1stdibs the photos of the articles shown here are unfortunately mostly rather spongy and possibly not suitable for customer presentations. To judge colors and nuances correctly, please use a mac retina display to view our photos! 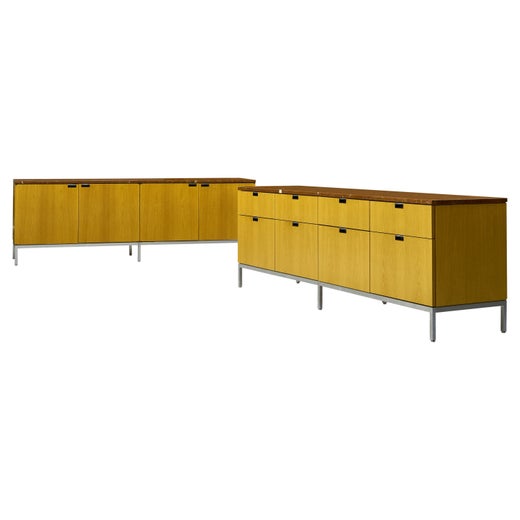 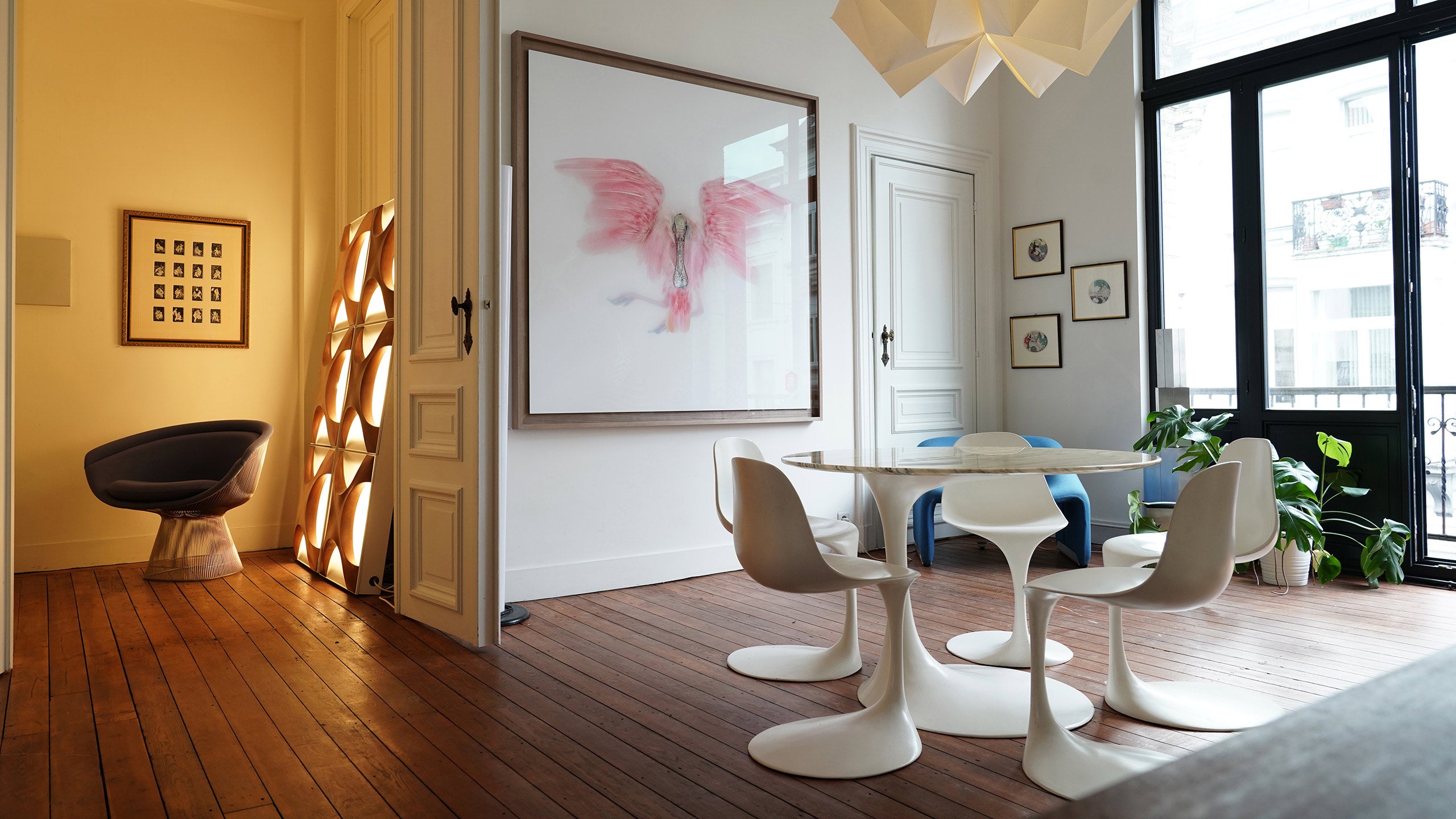 US$4,366
Mid-Century Modern Italian Teak Wall Unit Bookshelf
Located in Brooklyn, NY
This unique Italian style wall unit can be reconfigured to your specifications, shuffling the arrangement of the shelves and cabinets to your preferred usage. Vintage teak finish com...
Category

US$1,995
90 Piece Teak Wall Unit by Scandiline, Norway Customizable
By Scandiline 1
Located in Los Angeles, CA
We have over 90 pieces of this is a great Scandinavian Modern wall unit made from beautifully selected teak veneer over solid wood. Current inventory includes over 10 solid teak wall...
Category

Price Upon Request
Tomado Midcentury Modular Wall Unit, Shelving System with Rare Bookstands
By Tomado
Located in Schagen, NL
This modular industrial piece, features 3 shelves, two gliding stands for books and one stand to place upon the shelves. These stands are not often to be found anymore. Every shelf ...
Category

US$5,000
Handcrafted Postmodern Oak Wall Unit
Located in London, GB
The large Postmodern oak units can be either wall-mounted or freestanding. The acute twisted angle design fools the eye in a similar fashion to the Penrose and Escher staircase. The ...
Category