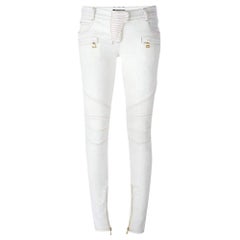 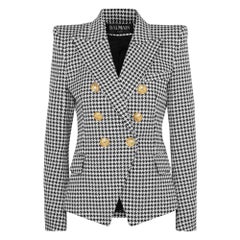 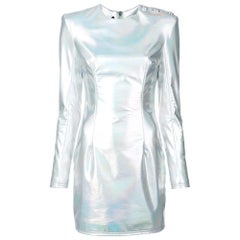 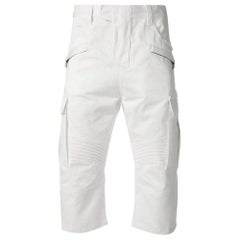 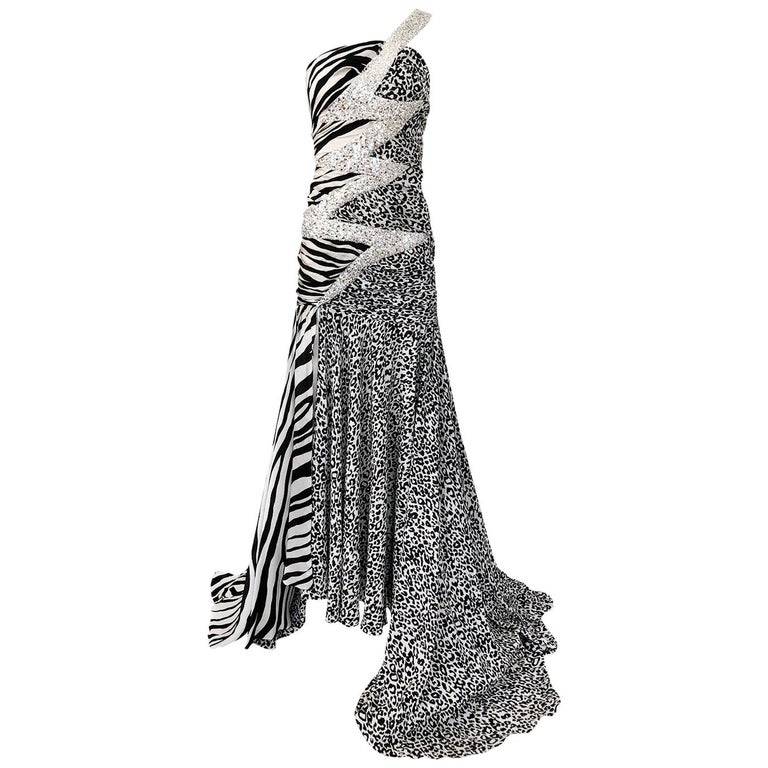 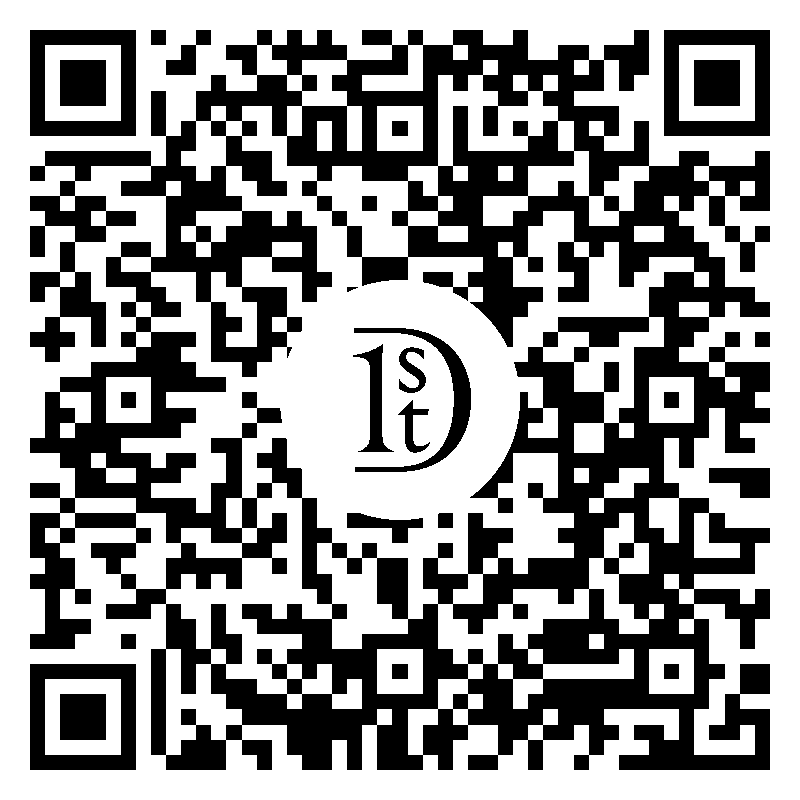 The Balmain transformation was definitely begun while under the tutelage of Christophe Decarnin. He was the designer to bring "more hard rock and punk" to the label, which has continued to the present day under Olivier Rousteing. The review from Vogue's Nicole Phelps that year stated: "And as promised, Spring's haute hippie feathers, fringe, and tie-dye were replaced by an all-Billy Idol soundtrack and enough leopard-print chain mail, python-pattern denim, and crystal-embroidered lightning bolts to make you wonder if there was anything at all left on the shelves at Trash and Vaudeville. To be fair, Decarnin's creations are much finer than the East Village emporium's, but they appeal to a similar kind of chick, one with a killer body and an active nightlife." This is the gown that closed the show that year and is perhaps one of the most memorable and significant pieces that he designed or the house. It was produced in very limited quantities and it is a pleasure to have one in the shop. The gown is all about movement and showing off the body in it to its best advantage. Inside there is a fitted and shaped corset that runs fro bust to hip so that you are molded and shaped to confirm to the silhouette Decarnin wished the wearer to have. It cuts across the bust with inner built in cups to give you lift and shape. An incredible zig zag made up of crystals shape and define the body further. This lightening bolt then extends up and over the shoulder to create a single strap. At the hips the dress flares out into an extended train of fabric with a mix of leopard spots and zebra print for contrast. The panels that make up the skirt are attached only from where they flow out from the body of the dress. This leave slits up to the high upper thigh that open and flash your full leg when you walk, move or sit. The train is long and dramatic. You can see how amazing this all is once it moves by the runway pics that I have included for reference. Excellent condition with one very minor thing to note below. It closes with the signature chunky silver zipper that Balmain uses and this is set along a curved seam so that it keeps with the form fitting construction of the dress. The inner bodice is constructed from a nude colored lingerie stretch corseting nylon fabric that has built in cups and is finished by hand. The fabric is hand draped over this and the crystals and lightening bolt attached by hand. Tagged a 40. Note that there is one small repair along the hem of the trained skirts. I have included a photo after the label photo. It is very minor and with the extensive fabric making up the trained parts of the skirt, it is something you would never see unless you lay it out flat and look for it as I did. There are many hand finishes through the dress. There is perhaps the very occasion light line in the silk from a very slight thread snag - this is natural occurrence and so very minor but mentioned for accuracy. The inner foundation garment does have some stretch I have provided the range laying flat. You might be able to squeeze a bit more on the upper end when on a real body Bust: 15-17" flat across from side seam to side seam Waist: 11.5-12.5" flat across from side seam to side seam Hips: 16.5-17.5" flat across from side seam to side seam Bodice: 33" from top of shoulder to bottom of inner foundation garment Skirt: 28.5" from bottom of inner foundation garment to shortest hem, 53" to the longest hem Modern Sizing Equivalent: XS-SML Send us a note to see these Reference Photos: F/W 2008 Balmain Runway, Final Look. This garment has been professionally cleaned, pressed and is odor free. Thoroughly checked over before shipping, it will be ready to wear upon arrival.


The son of a dressmaker and a drapery salesman, Pierre Balmain was born in 1914 in southeastern France and formed an interest in fashion at an early age. His mother wanted her son to be an architect — but the principles of design and structure Balmain learned in his brief studies at the École des Beaux Arts served him well throughout his career. Balmain founded his now-iconic label in 1945. Alongside fellow couture titans Christian Dior and Hubert de Givenchy, Balmain’s post-war take on luxe dressing featured bell-shaped skirts falling from slender waists, structured jackets over sheath dresses and embellishments like fur trim; he called the look “Jolie Madame.” The Duchess of Windsor was an early fan, prompting an aristocratic following. Balmain was among the first to offer French looks to the American market. Since Pierre Balmain’s death in 1982, the design reins have been handed to luminaries such as Oscar de la Renta and Instagram sensation Olivier Rousteing.


Today’s Balmain has more in common with the master’s original haute couture than you might expect: sharply tailored blazers that nip in at the waist, delicate stilettos and ultra-feminine evening wear are wardrobe basics for the 21st-century woman, too. Lovers of couture history will also prize the fluid, easy sketches from the master’s own hand they’ll find on offer here, while fashionistas clamor for military-style jackets and skinny jeans. Whether you’re a colonel in Rousteing’s “glamour army” or you fancy yourself a “Jolie Madame,” a Balmain piece — from the sixties or even last season — will add a bold, sexy note to your look. Daytime or night, vintage Balmain feels right now.