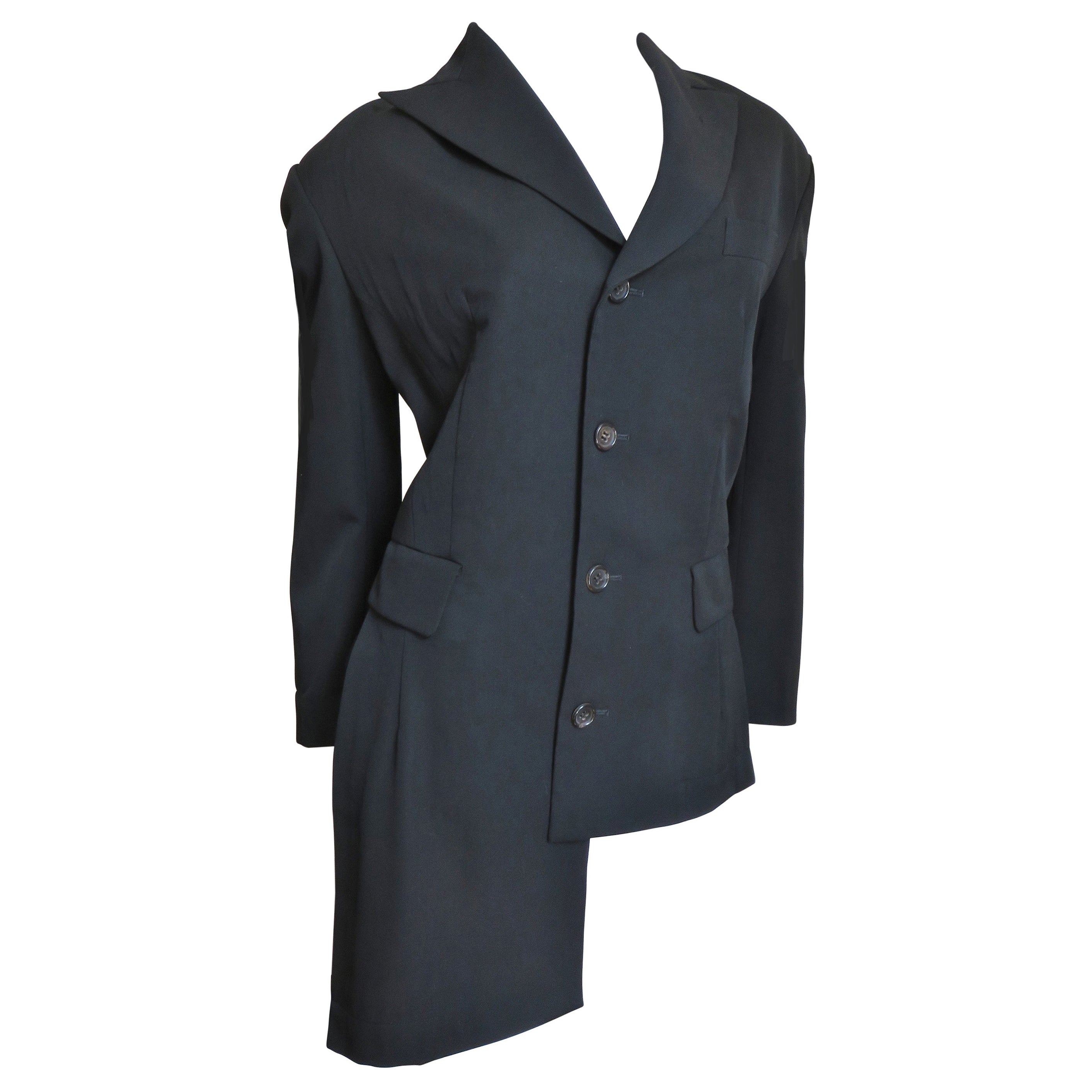 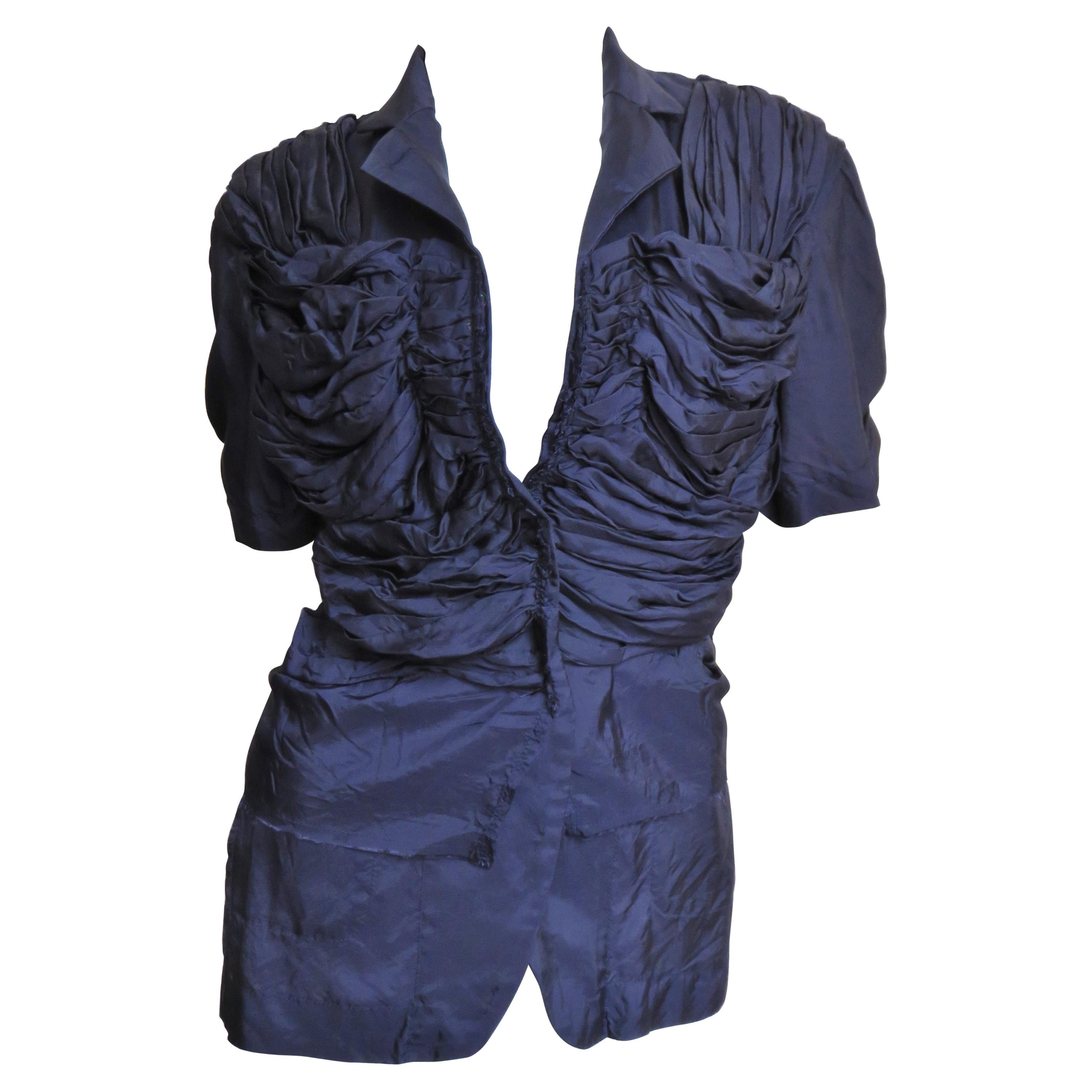 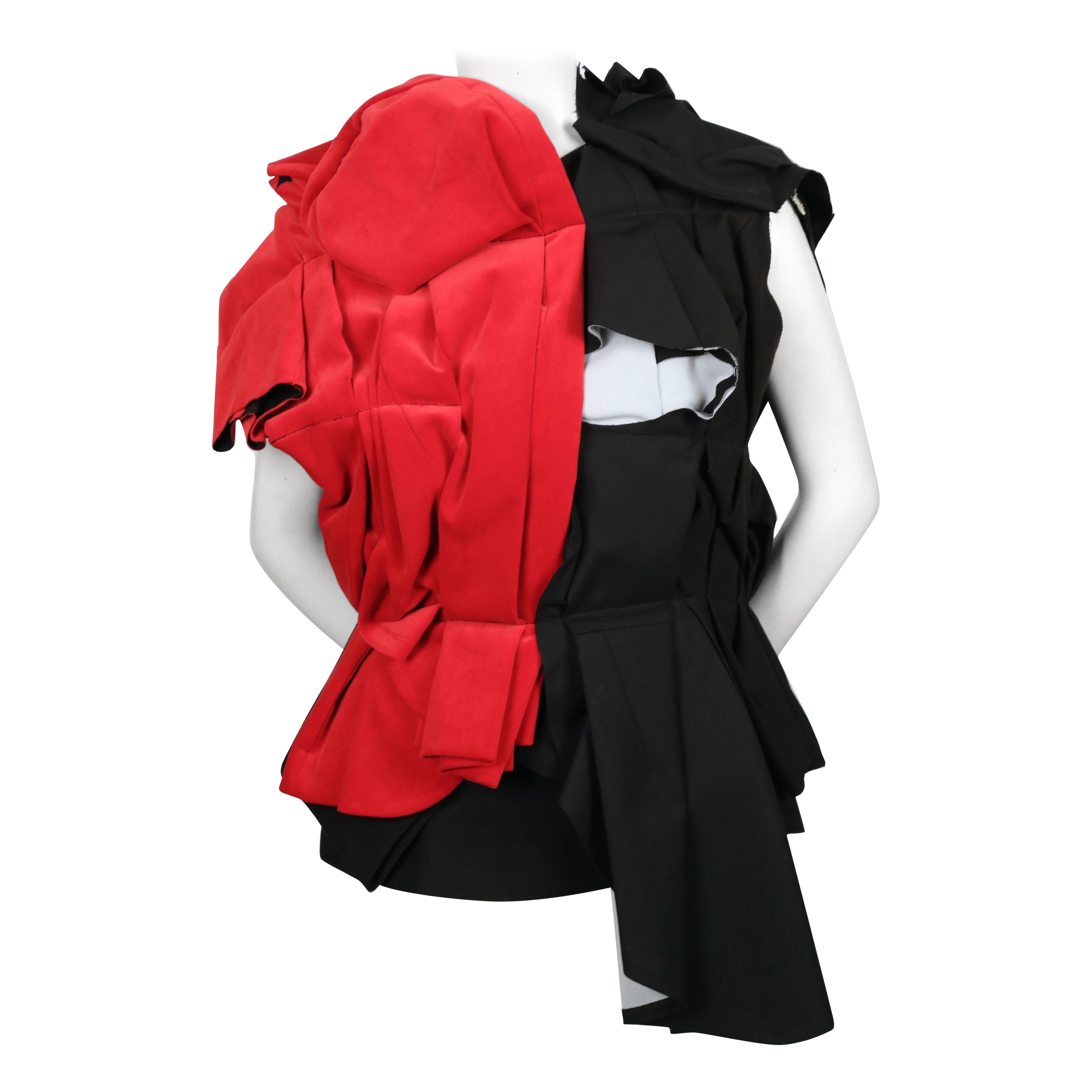 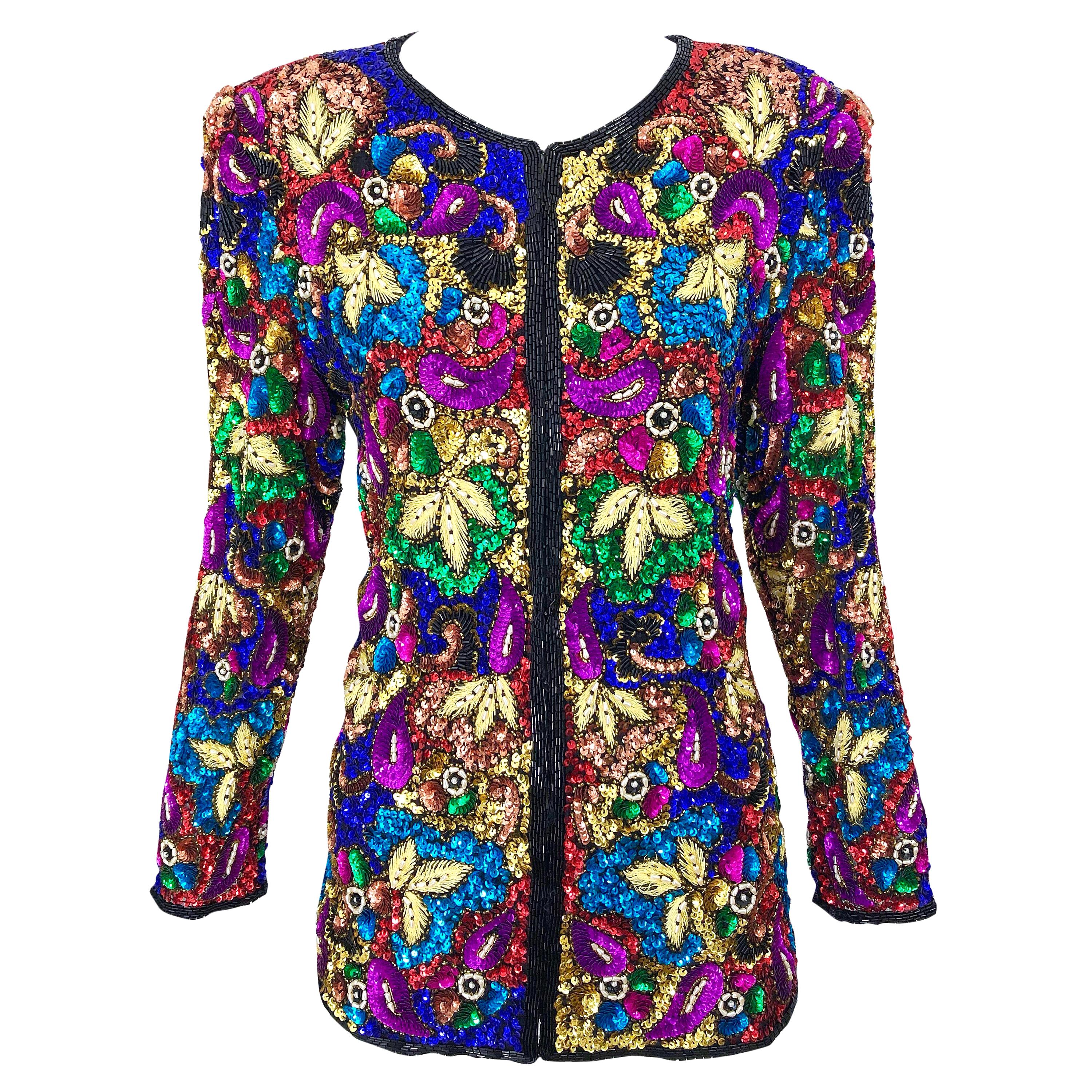 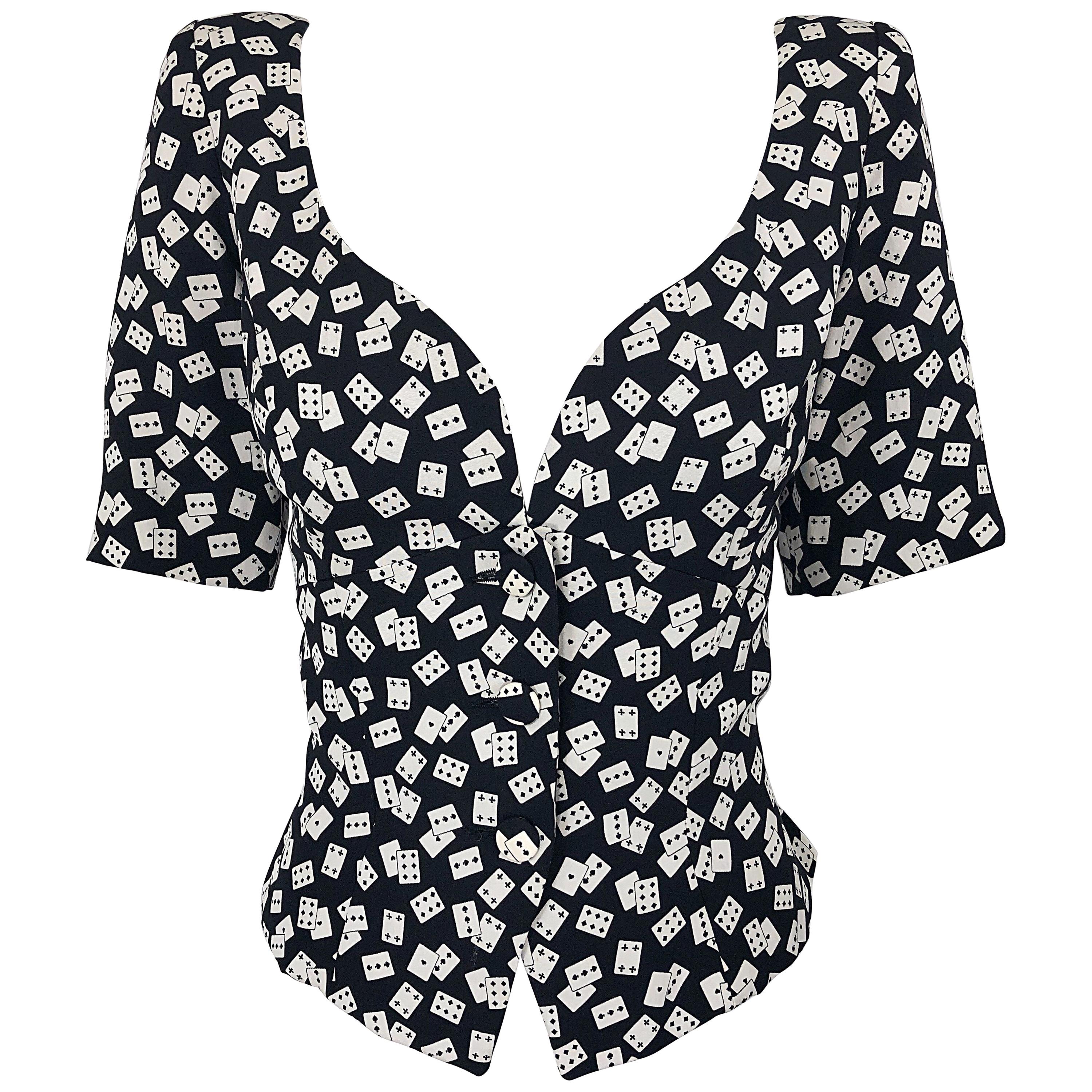 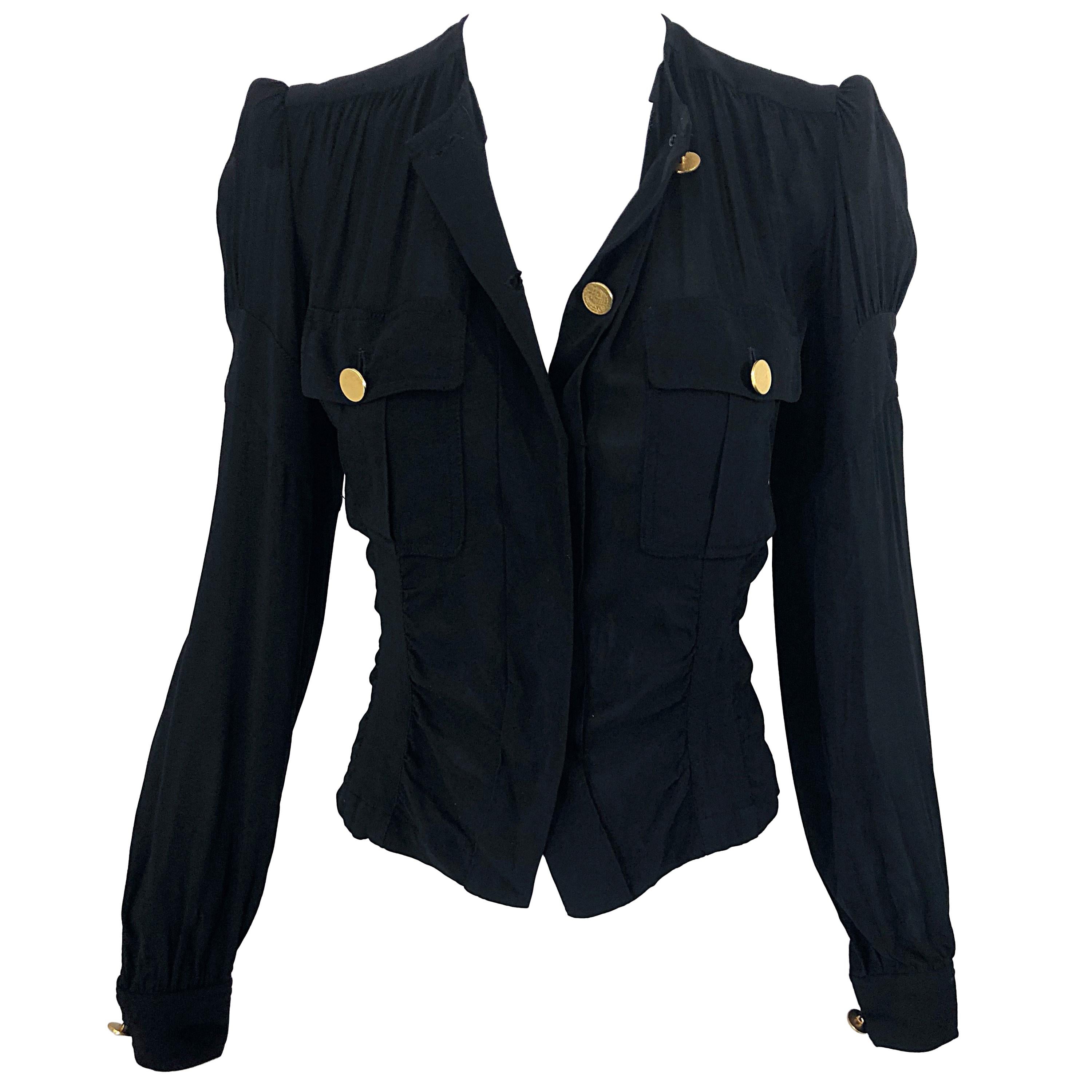 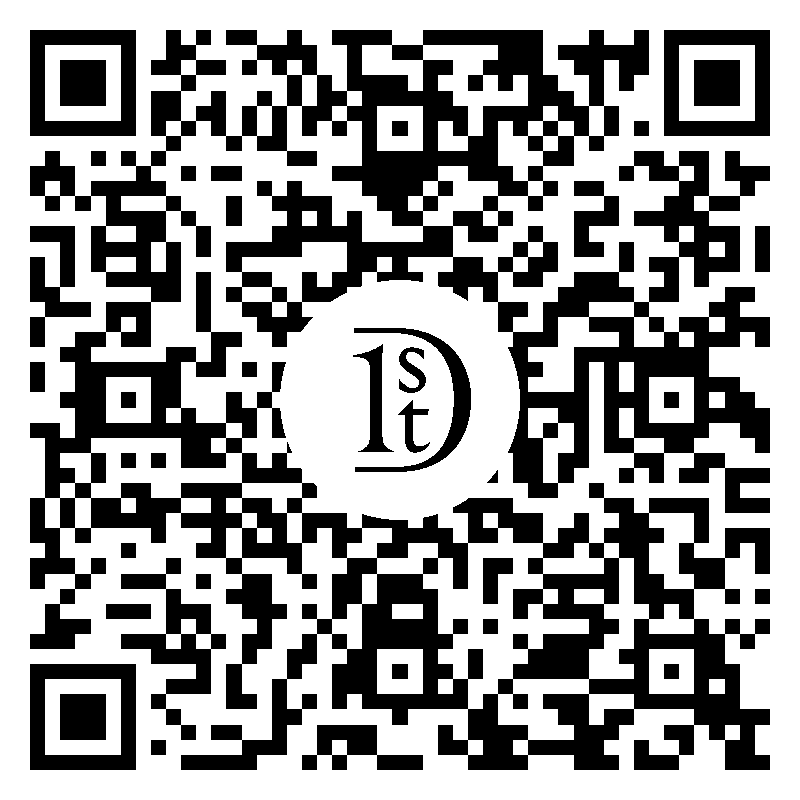 Comme des Garcons 'Comme des Garcons' charcoal spring wool velcose front closing tabs jacket/shirt is accented with domain sleeves and a mandarin collar. The sides has two slits measuring 6 1/2", as well as a center-back slit which measures 6 1/2". The total length measures 26", collar height is 1 3/4", neck-to-sleeve's cuff is 29", cuff is 11", underarm circumference is 42", waist circumference is 36 1/4", hem circumference is 42". There are a few tiny 'dot holes' on the front right, and a hole on the left back sleeve but hardly noticeable. Semi line, size med, made in Japan. 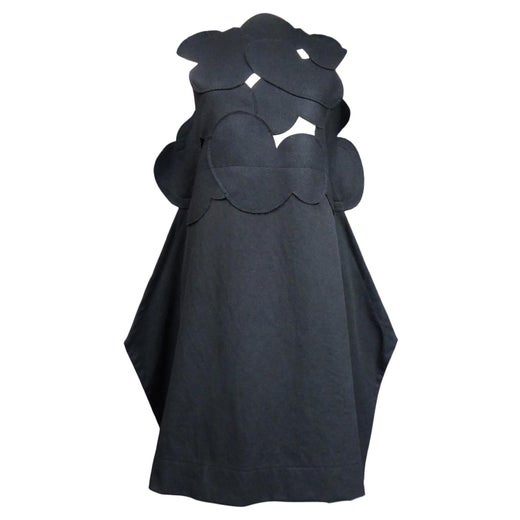 Comme des Garçons is one of the world’s most innovative and trailblazing fashion brands, helmed by its inimitable founder, Japanese designer Rei Kawakubo (b. 1942), who has a penchant for breaking fashion and cultural norms. The only living designer apart from Yves Saint Laurent to have a retrospective at the Metropolitan Museum of Art’s Costume Institute, Kawakubo has permanently changed fashion with designs that challenge traditional ideas of beauty with a creative and transgressive exuberance.

After studying art and literature at Keio University in Tokyo, Kawakubo worked as a freelance stylist before establishing her own label in 1973, opening her first store in Tokyo in 1975. Kawakubo has since been instrumental in pioneering many concepts now familiar in contemporary fashion. One of her most iconic moves was her introduction of androgynous styles (Comme des Garçons means “like the boys” in French) with asymmetrical, twisted silhouettes that envelope the body. While she told the New York Times that the “basics of clothing lie in men’s fashion,” Kawakubo believes in the concept of humanness in clothes, such as titling her spring 1995 show “Transcending Gender.” In the 1970s, when color-blocking was the norm, Kawakubo stuck to her monochromatic color palette dominated by shades of black with uncompromising dedication, although with evocative and powerful use of red and white.

Comme des Garçons is also known for an often shocking take on fashion. Deconstructed tailoring, violently slashed fabric and sculptural shapes are some themes that run through the brand’s collections, but Kawakubo never explains the meaning of her conceptual pieces, which fall somewhere between art and fashion. Even though the brand has more commercial offshoots like PLAY, known by the iconic heart motif with eyes, the premier men’s line Homme Plus and the multilabel Dover Street Market that opened in 2004, the essence of Comme des Garçons remains Kawakubo’s otherworldly and undefinable creations, which are impossible to ignore.

1stDibs Buyer Protection Guaranteed
If your item arrives not as described, we’ll work with you and the seller to make it right. Learn More
About the Seller
4.8
Located in New York, NY
Vetted Seller
These experienced sellers undergo a comprehensive evaluation by our team of in-house experts.
1stDibs seller since 2011
834 sales on 1stDibs
Typical response time: 2 hours
More From This SellerView All
People Also Browsed
You May Also Like 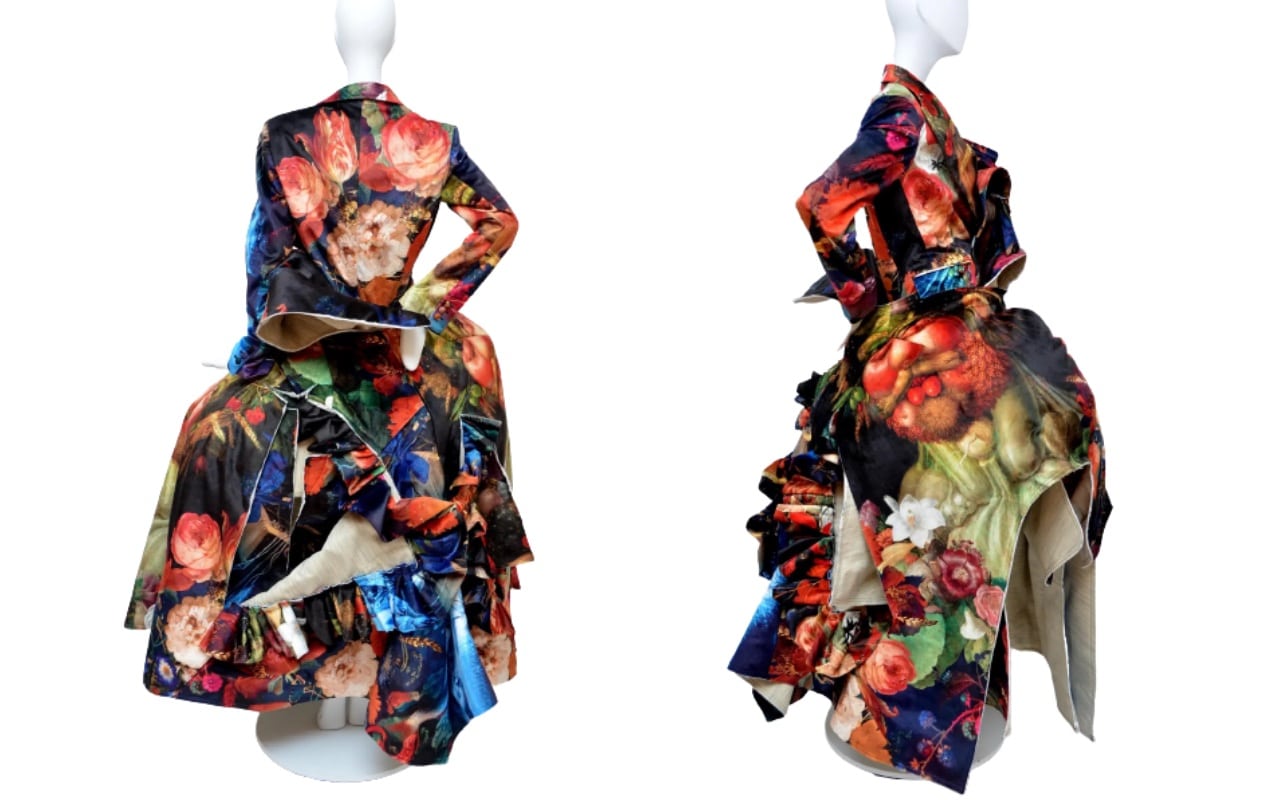 The standout look, from a collection that left fashion critics breathless, has us mesmerized.