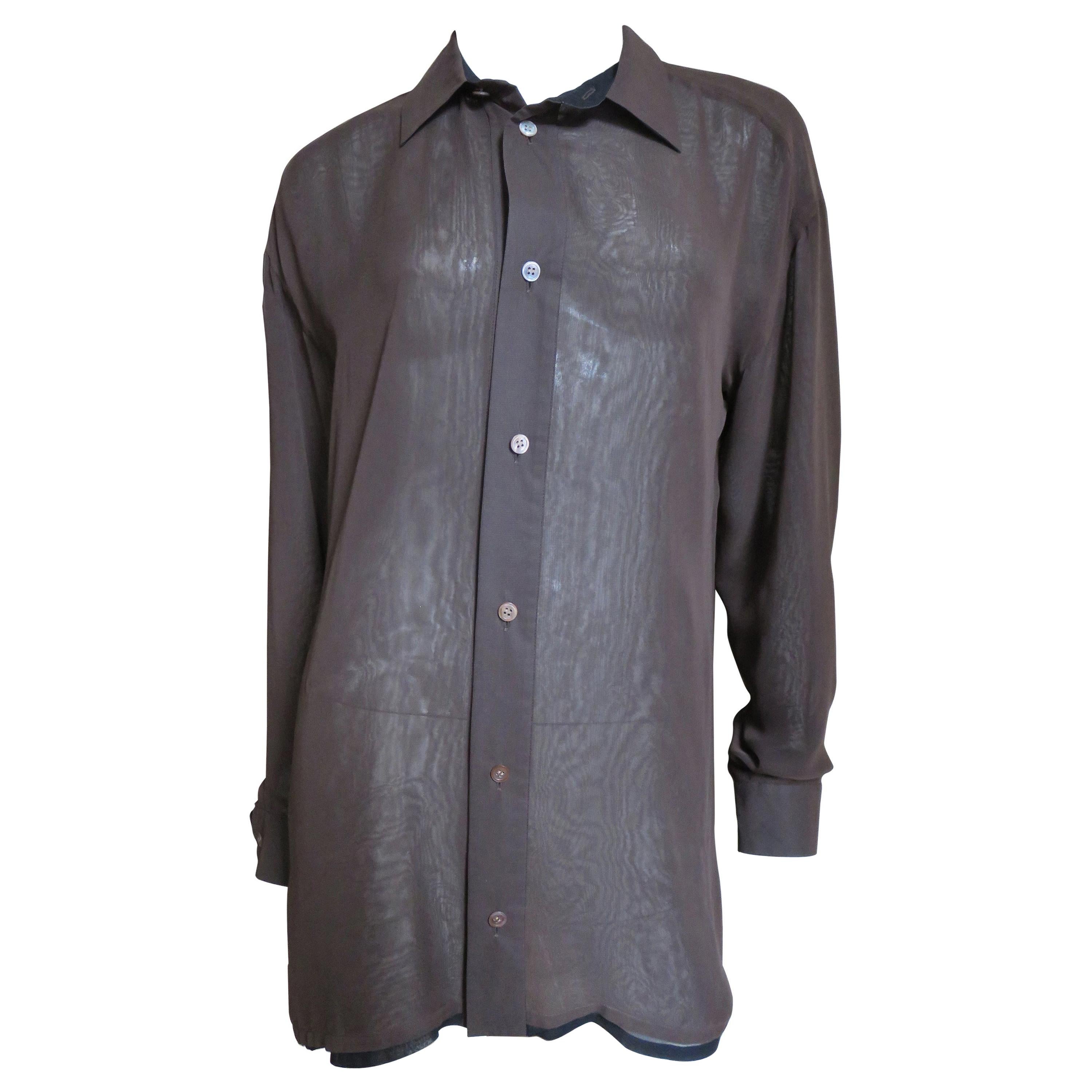 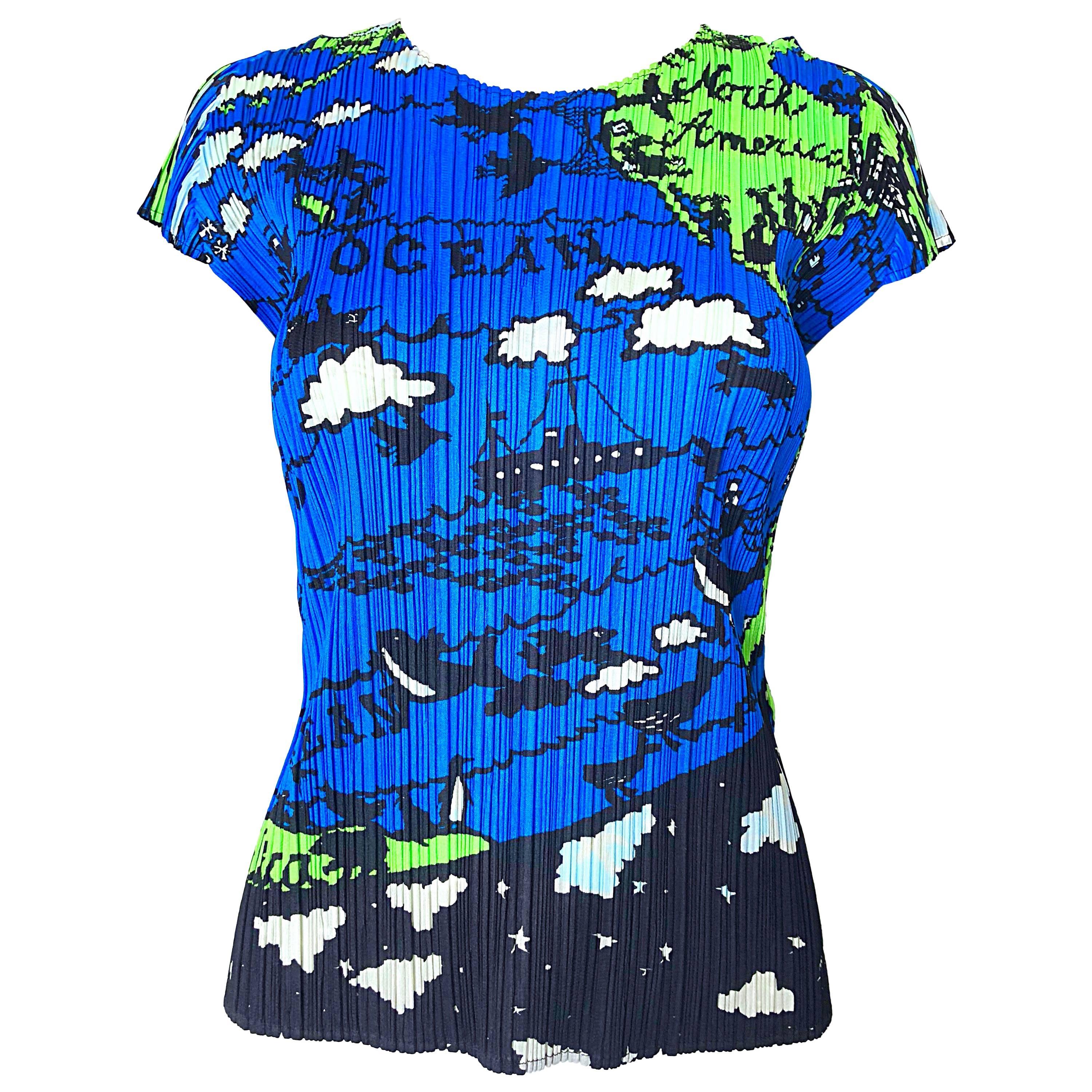 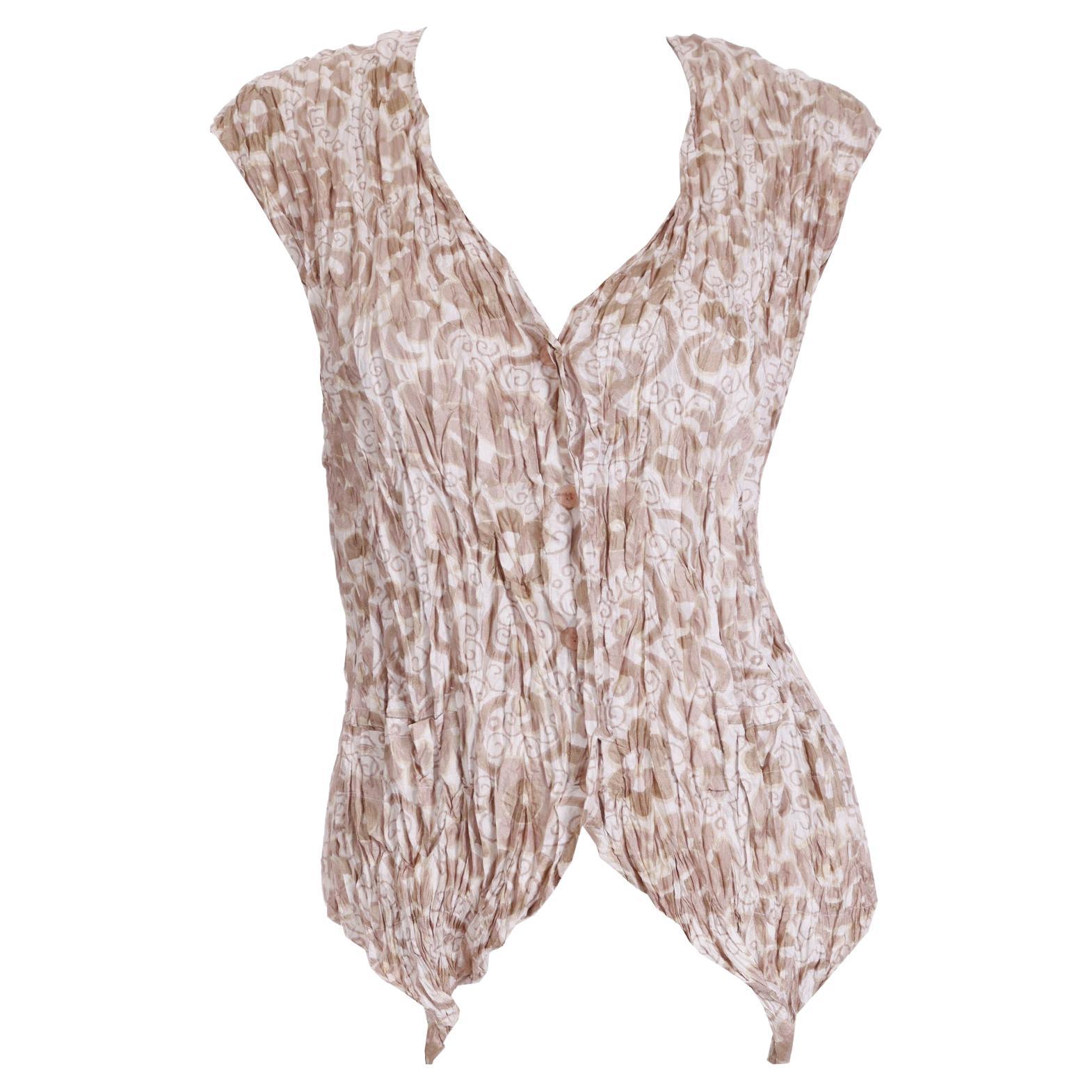 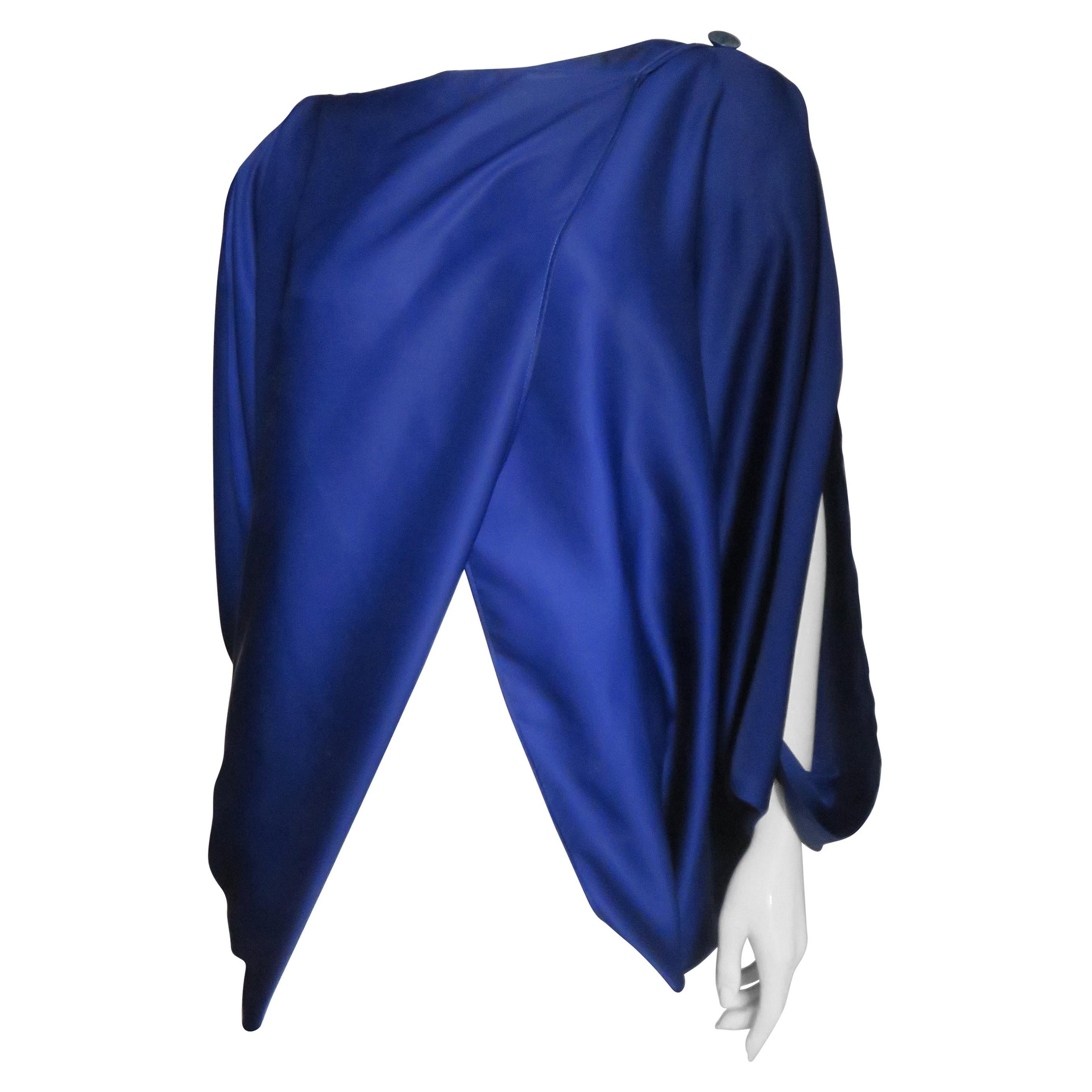 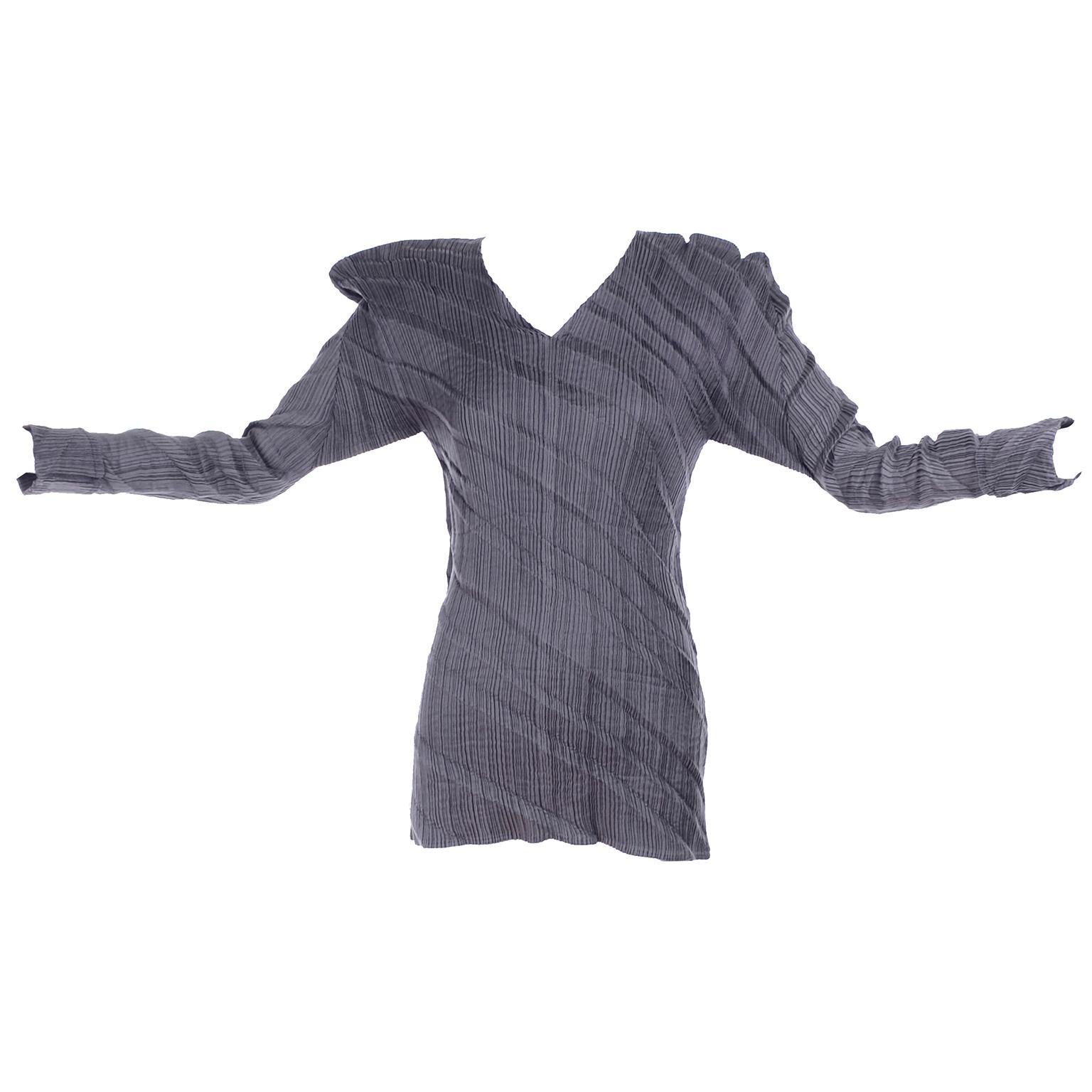 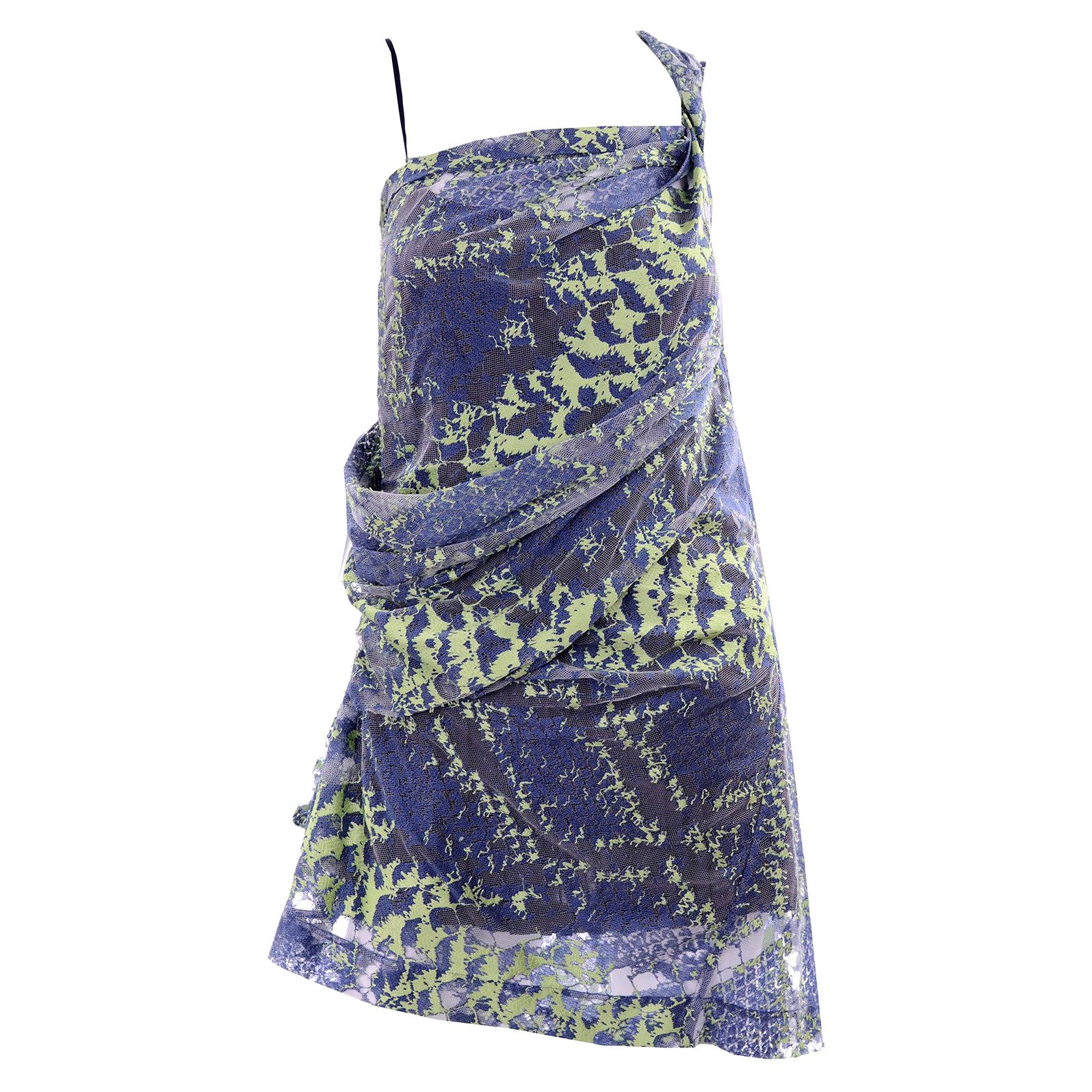 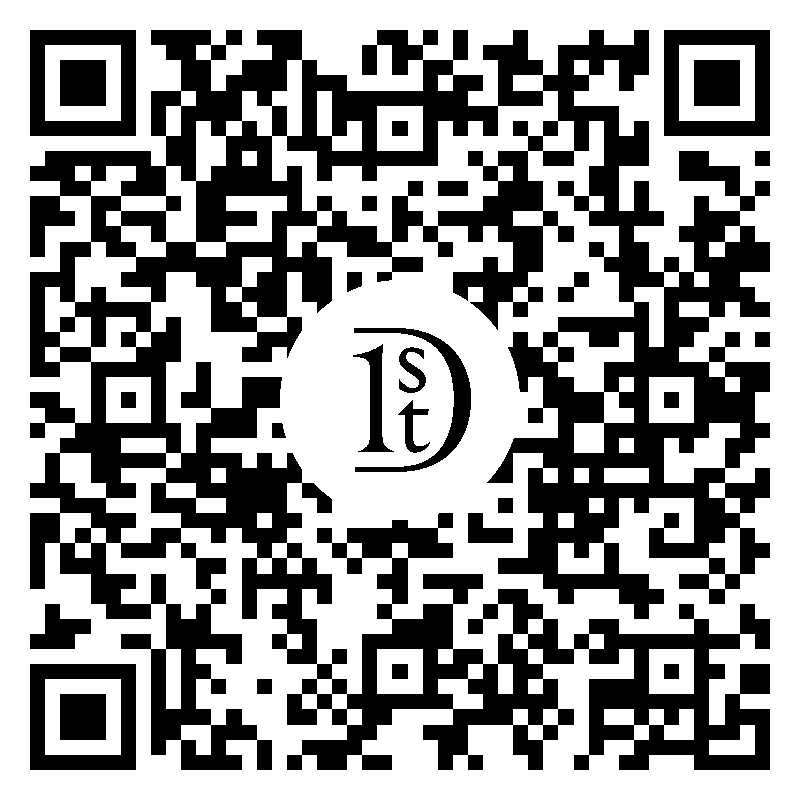 This is a bright pink cap sleeve pleated top designed by Issey Miyake for the Pleats Please label. This top has a straight fit and has a round neckline. The unique pleating is a signature Issey Miyake style and technique. 100% Polyester knit. The Pleats Please Issey Miyake size guide suggests this top would be a size 5, which is the largest size they offer in their brand. This would be equivalent to a size Large. MEASUREMENTS: BUST: 40-46" SLEEVE LENGTH: 6" SHOULDERS: 15" LENGTH FROM SHOULDER: 22" 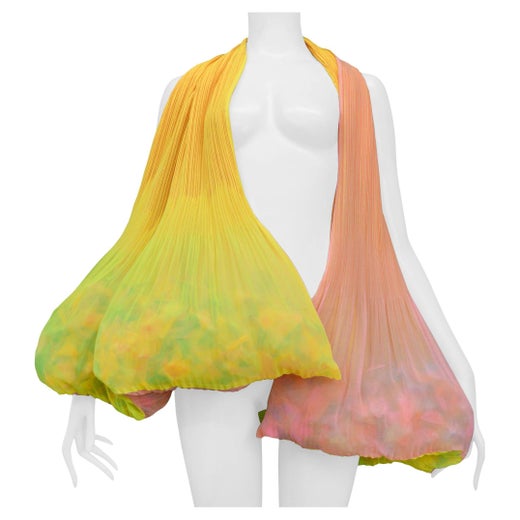 From the prismatic Pleats Please collection to the modular, three-dimensional garments crafted from recycled plastic bottles in his Reality Lab, the captivating fashions by Japanese designer Issey Miyake are all about movement.

Though long a staple in couture — from delicate women’s skirts to men’s suit pants — pleats took on new life in Miyake’s hands. By using a heat press to cure his fabrics after his garments are stitched, Miyake was able to maintain the accordion structure of the pleat, turning a series of folds into sculptural, often futuristic forms unbound by the shape of the human body. In 1993, Miyake debuted “garment pleating” in his Pleats Please line, in which the clothes are constructed at a size that is larger than what is intended for the finished product. The pleats are then created — a process that involves folding and ironing and is separate from the joining of seams — and individual pieces are subsequently hand-fed into a heat press. The pleats are permanent and the garments can be worn and washed without losing their shape.

Miyake’s pleats run the gamut in scale, which enabled him to evoke dramatic, sharp silhouettes and flowy movements in equal measure. In essence, he created an entirely new material whose iterations are infinite — a feat of technology as much as fashion.

Other innovations include Miyake’s 1997 Just Before collection, which introduced a series of tube-knit dresses that could be cut as desired, reducing both work and resources. His Reality Lab now investigates new materials, such as a fully recycled polyester. Miyake’s prowess, in fact, captured another iconic figure in the tech world: Steve Jobs, for whom the designer made hundreds of identical black turtlenecks, the late Apple founder’s sartorial signature.

About the Seller
4.9
Located in Portland, OR
Platinum Seller
These expertly vetted sellers are 1stDibs' most experienced sellers and are rated highest by our customers.
Established in 2001
1stDibs seller since 2015
1,483 sales on 1stDibs
Typical response time: 2 hours
More From This Seller

Issey Miyake Color Block Shirt
By Issey Miyake
Located in Water Mill, NY
A fabulous 2 layer shirt from Issey Miyake. It is comprised of 2 semi sheer layers, a black layer with a brown layer over top, the black layer peeks out at the hem. It has a shirt ...
Category

$795
Issey Miyake Open Sleeve and Midriff Cape Top
By Issey Miyake
Located in Water Mill, NY
A fabulous blue top, shirt from Issey Miyake. It wraps overlapping at the front exposing the waist and buttons at the shoulder. The back is fuller and longer draping and giving a c...
Category