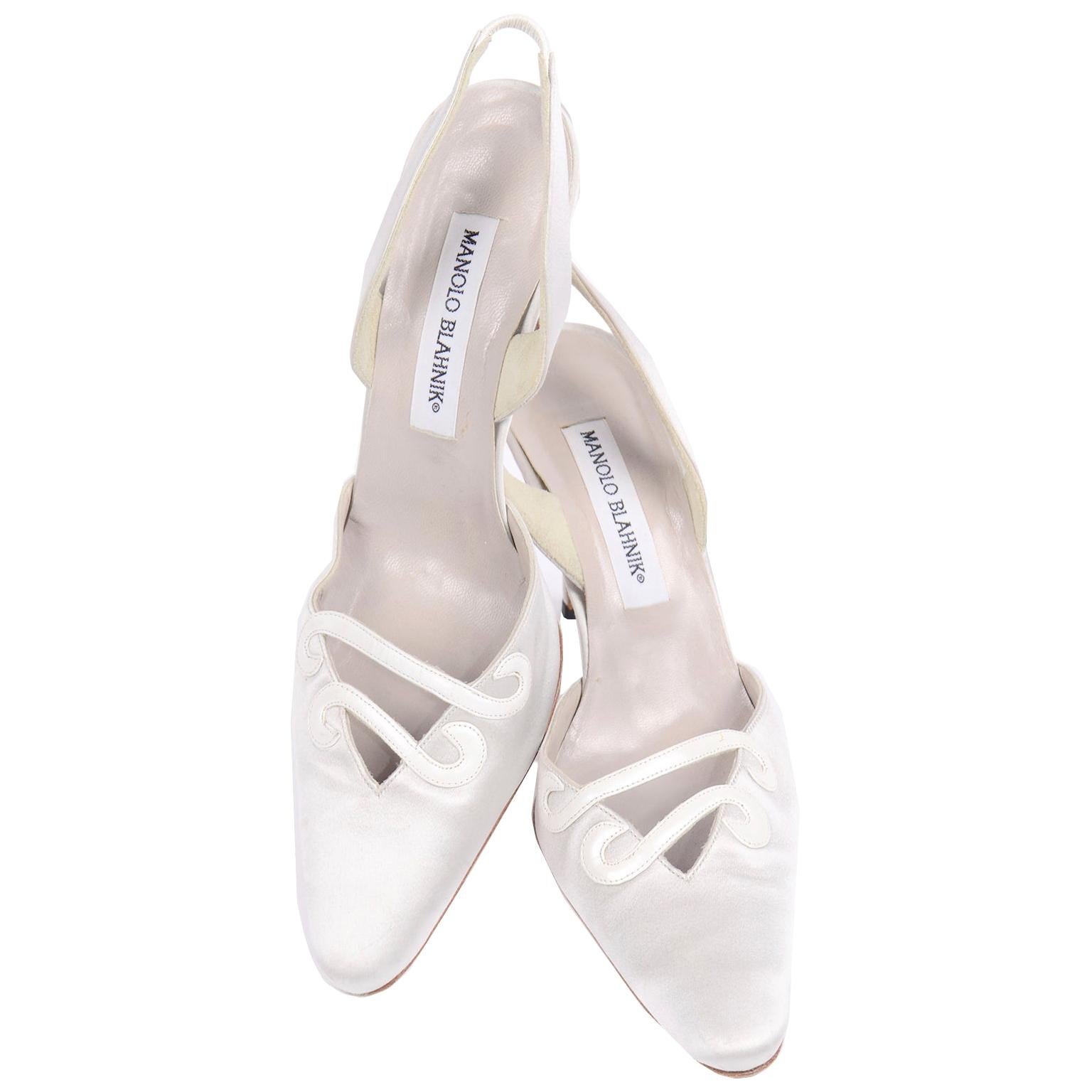 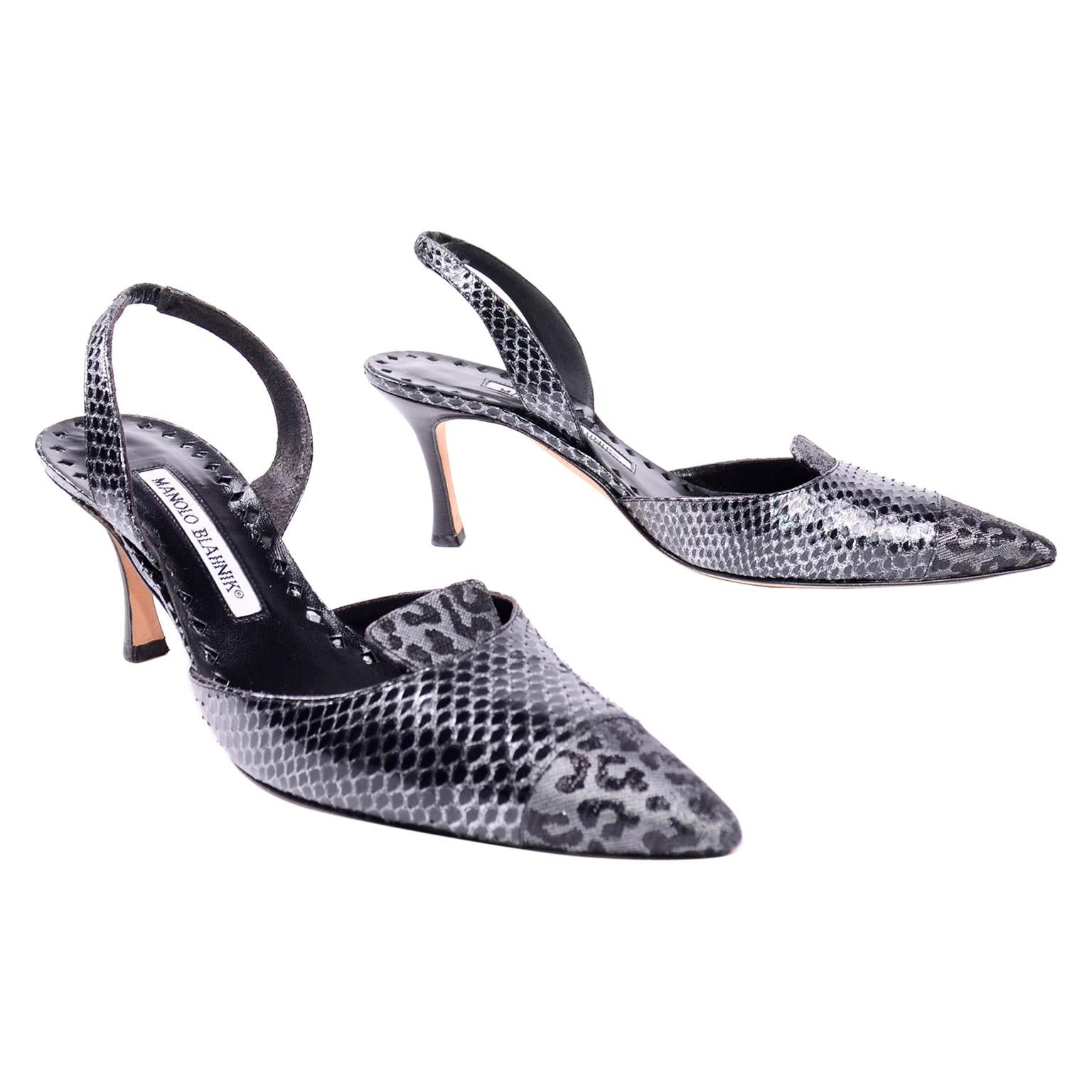 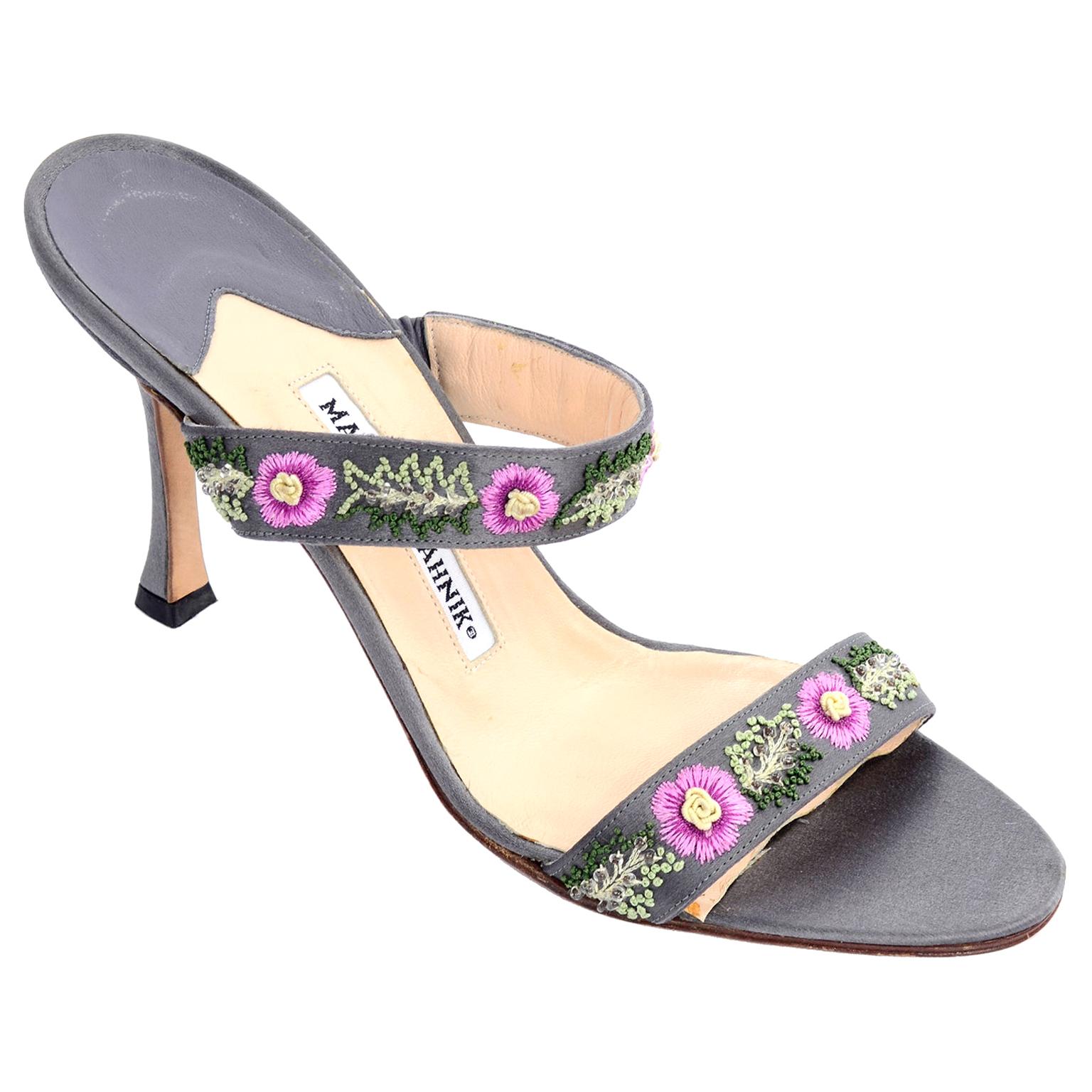 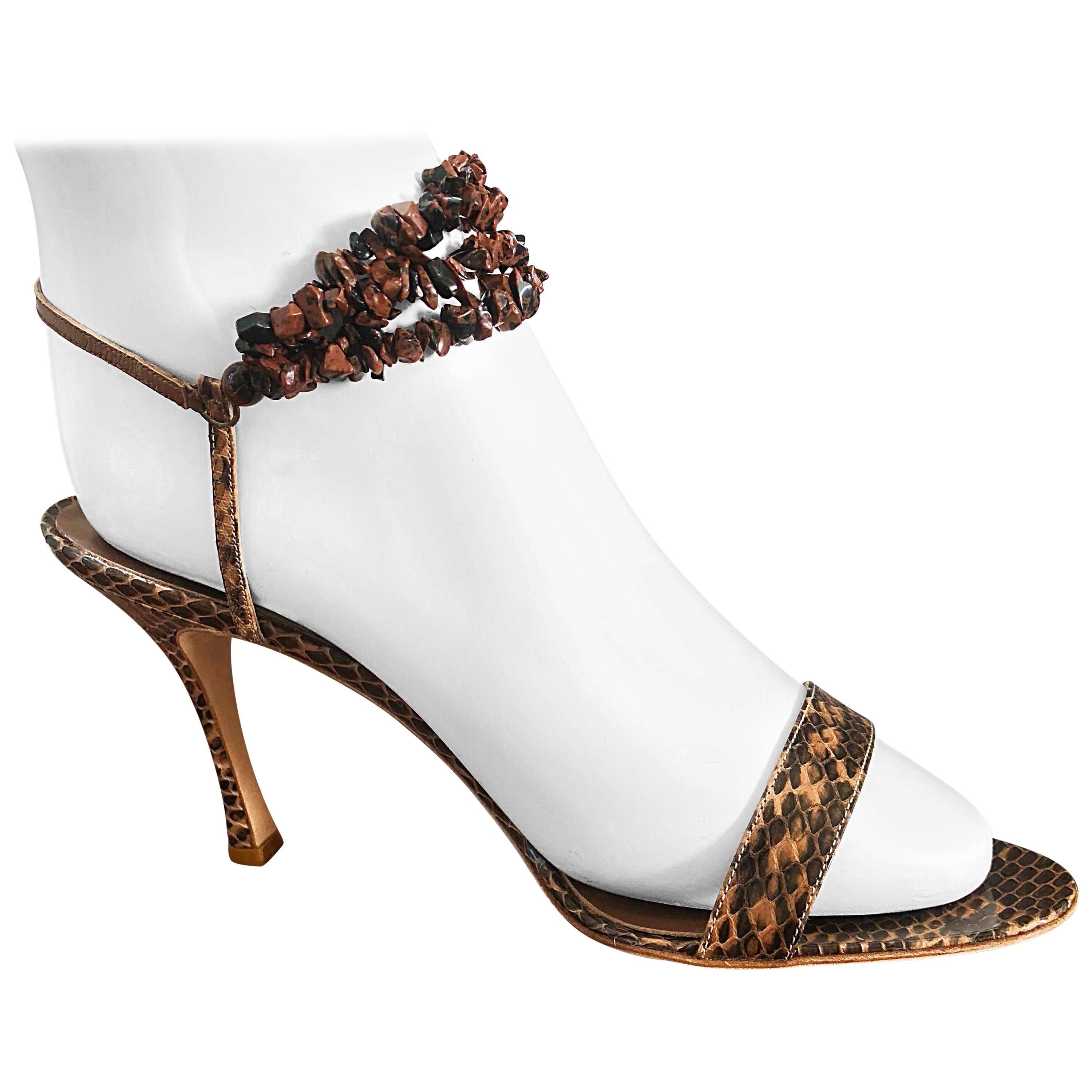 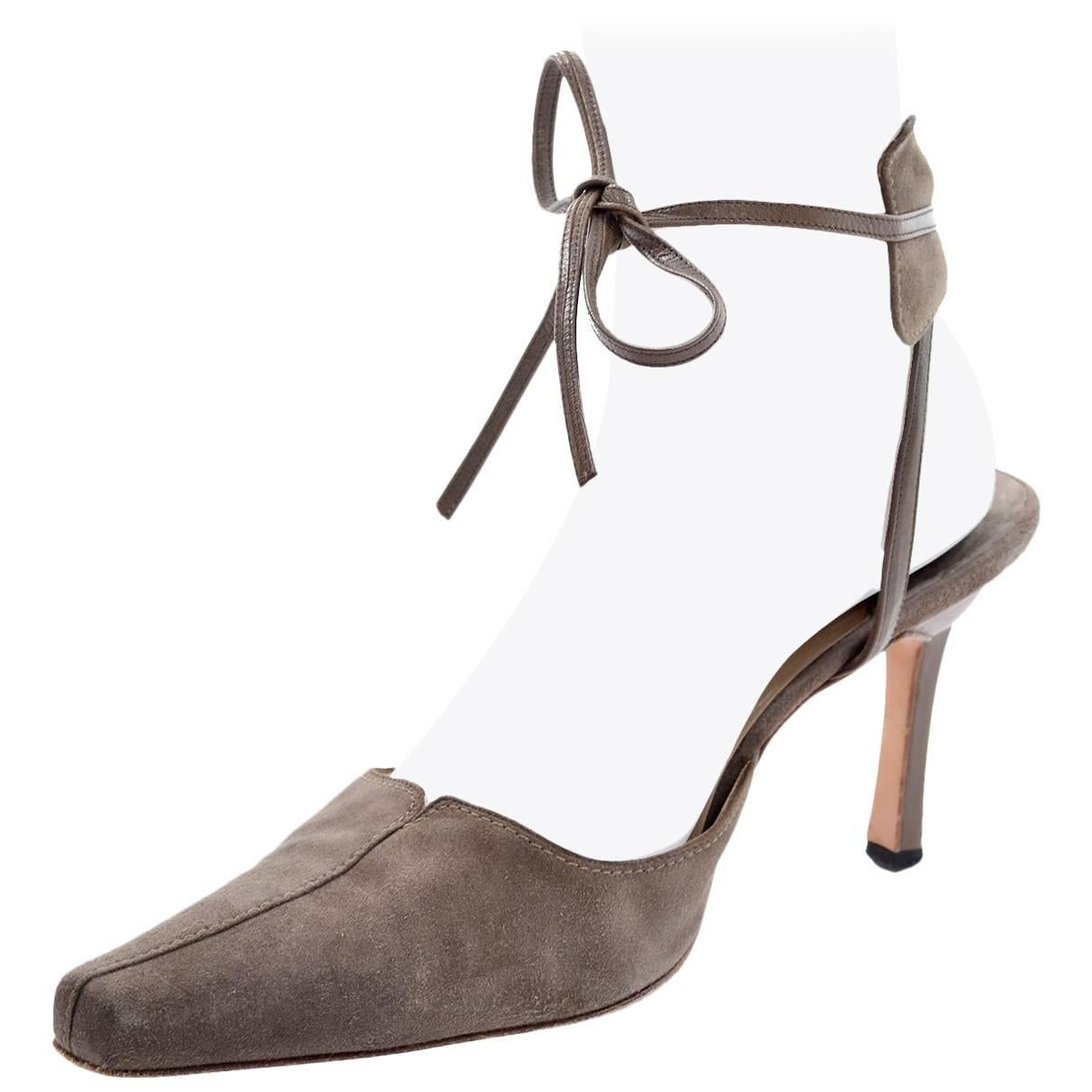 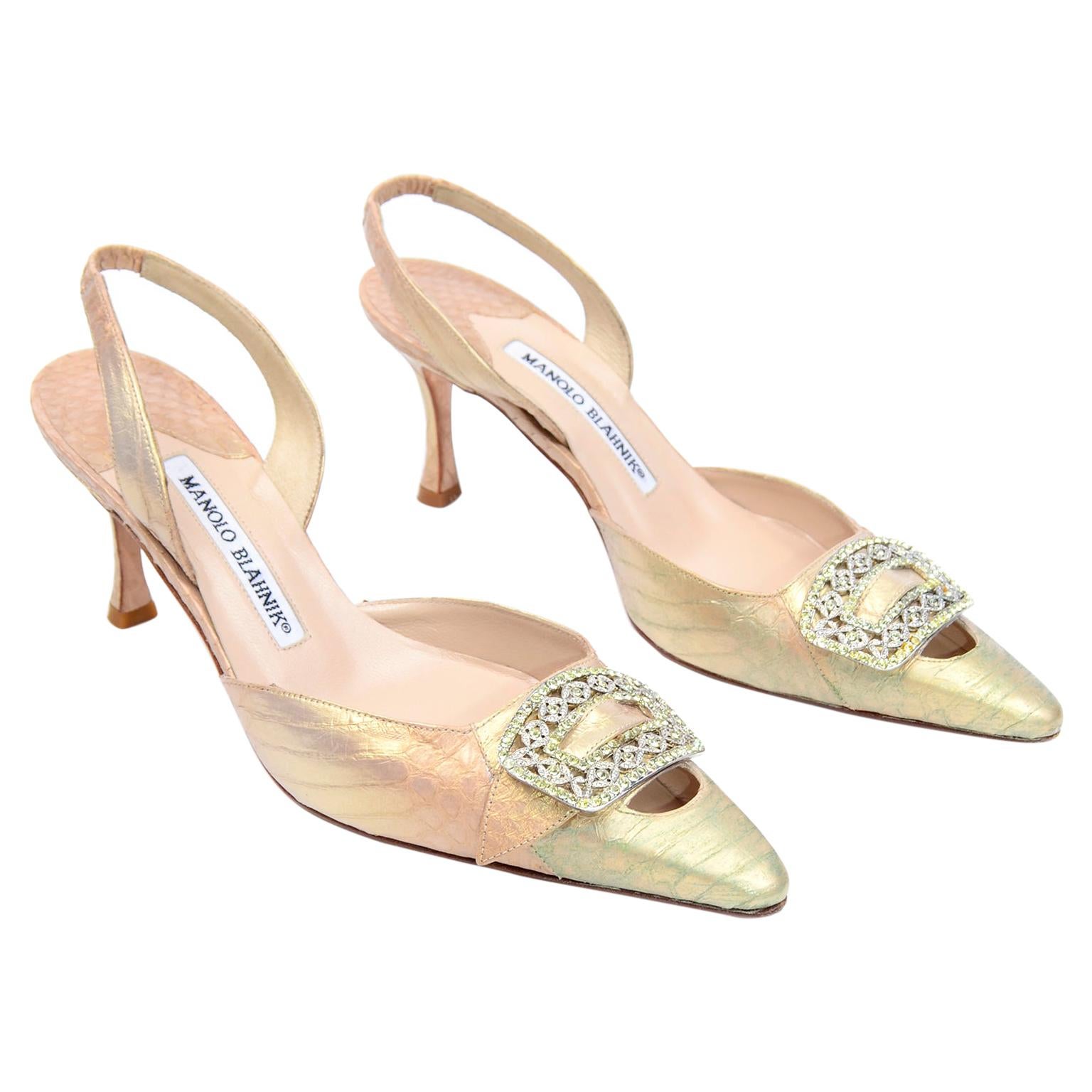 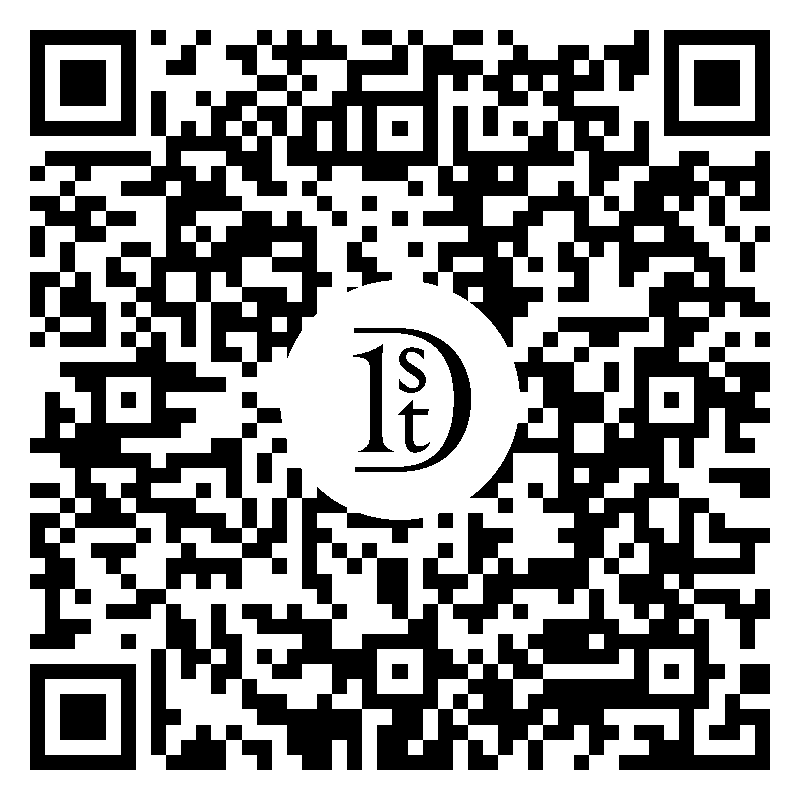 These pretty green satin Manolo Blahnik shoes have 4" heels and fabulous leather laces that become ankle straps. The shoes are marked a size 39 and were made in Italy in the 1980s. We love these Blahnik's and we got these and many other of his shoes from a London estate. She owned many of his early shoes and had a beautiful collection! You can see these in a scene in the documentary about Manolo Blahnik called The Boy Who Made Shoes For Lizards! 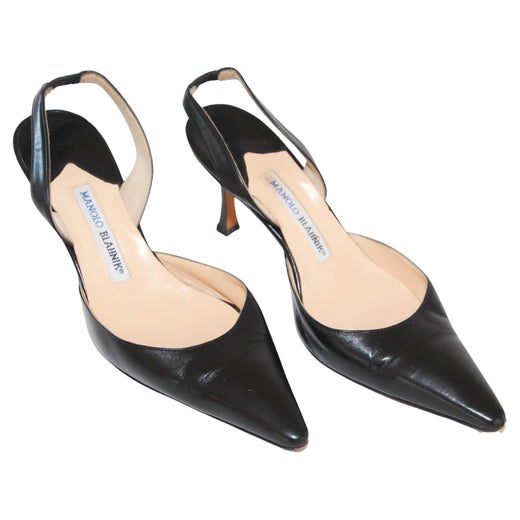 There may be no designer with as wide a breadth of references as the fashion and footwear icon Manolo Blahnik, whose stated sources of inspiration for the creation of his sublime shoes include — but are not limited to — Diana Vreeland, ancient Greece, 21st-century architecture, Spanish cinema and Piet Mondrian.

It’s a fittingly robust list for someone who has spent a lifetime in the self-described “pursuit of beauty.”

Born in 1942 in Spain’s Canary Islands, Blahnik had an early exposure to shoemaking: During World War II, his designer-shoe-loving mother enlisted a local cobbler to teach her to make her own footwear from available materials. The young Blahnik was intrigued.

After briefly studying law in Switzerland with the intention of becoming a diplomat, Blahnik moved to Paris, where he took a job in a vintage clothing shop while studying art at École des Beaux-Arts as well as set design at the art school of the Louvre. It wasn’t until years later, however, that he would realize his calling as a shoe designer. In the late 1960s, Blahnik relocated to London, where he worked for both the Sunday Times and Vogue. In the early 1970s, the renowned American Vogue editor Diana Vreeland saw his sketches and urged him to pursue footwear.

After a debut collection for celebrated fashion designer Ossie Clark — featuring models that Blahnik had gotten to know through his work in the fashion industry, among them Twiggy — received acclaim, he created footwear for illustrious dressmaker Jean Muir and apprenticed with professional shoemakers in London to perfect his craft. By 1973 he had bought out the shoe boutique Zapata and made it his own. Bloomingdale’s introduced him to the American market with a collection a few years later.

Vintage Manolo Blahnik shoes are famous for their theatricality, as the designer is well known for the whimsical, fantastical elements he brings to footwear, often in an explosive palette. “I have always approached color in a bold way, from all angles and variations,” he once said. “Always searching for the poetry of an impossible color.” Tack on teetering height as a trademark that took shape from early on.

“Those poor girls couldn’t walk properly, but people loved it,” the designer recalled of his early models. “Sir Cecil Beaton said to me, ‘Is this a new way of walking?’” To take it from pop culture, it indeed might have been: People are still talking about the night that Bianca Jagger dazzled, horseback, at Studio 54 in a Halston dress and Blahnik shoes on her 30th birthday, and, decades later, the footwear icon was rendered a household name during the long-running television series Sex and the City.

Today, Manolo Blahnik remains a virtual synonym for luxury shoes. Find a range of his footwear and handbags on 1stDibs.

1stDibs Buyer Protection Guaranteed
If your item arrives not as described, we’ll work with you and the seller to make it right. Learn More
About the Seller
4.9
Located in Portland, OR
Platinum Seller
These expertly vetted sellers are 1stDibs' most experienced sellers and are rated highest by our customers.
Established in 2001
1stDibs seller since 2015
1,597 sales on 1stDibs
Typical response time: 2 hours
More From This SellerView All
People Also Browsed
You May Also Like