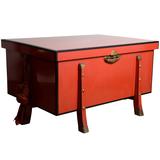 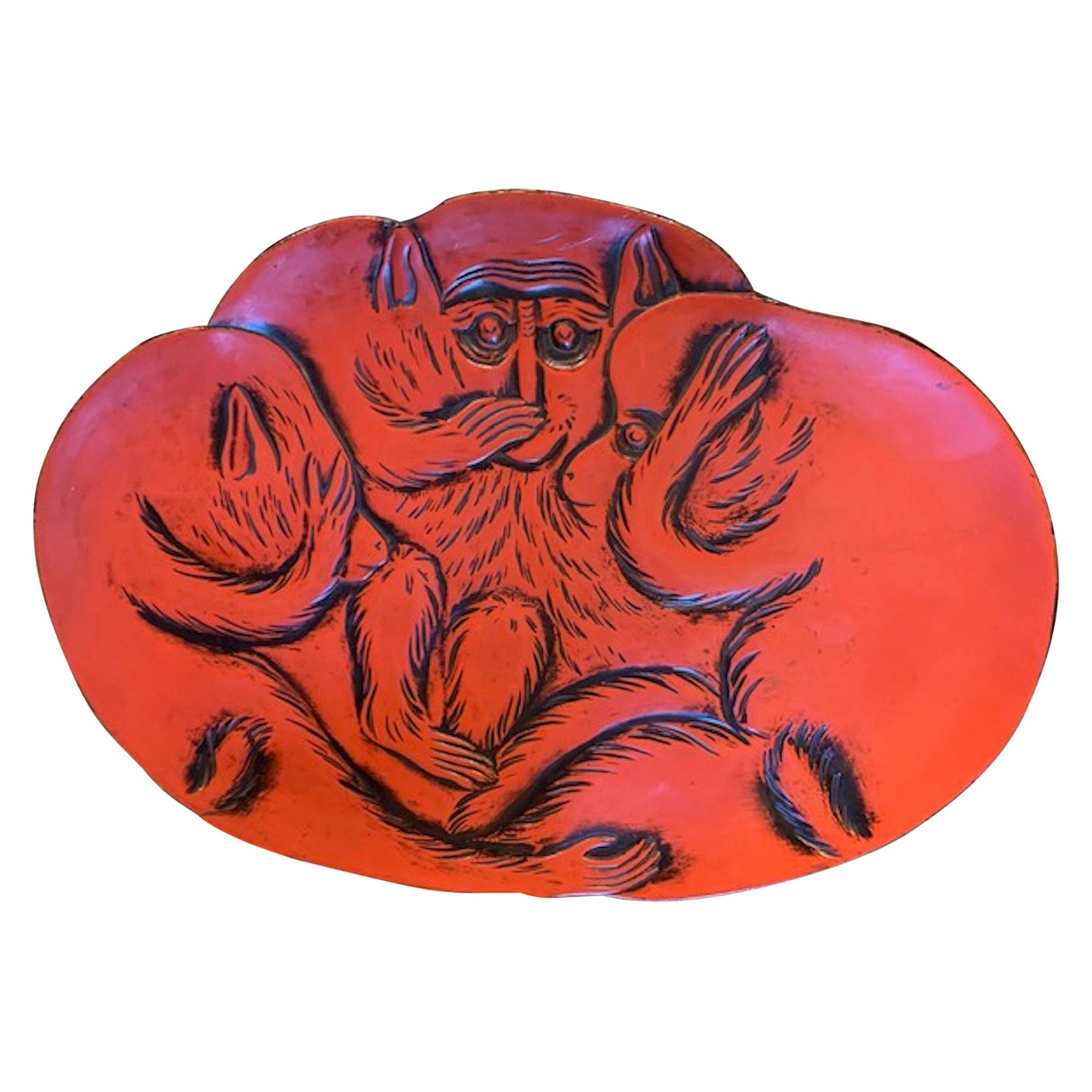 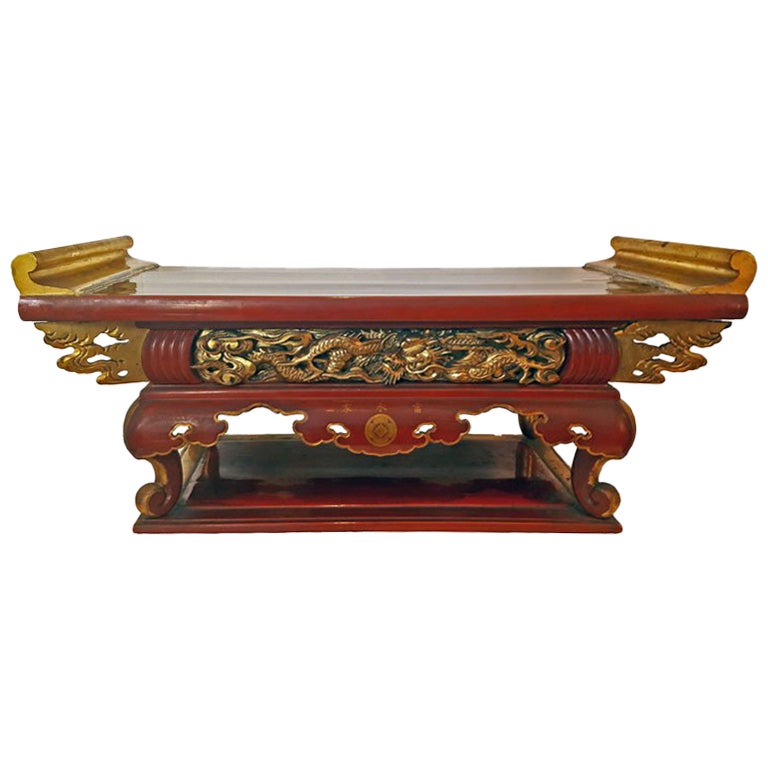 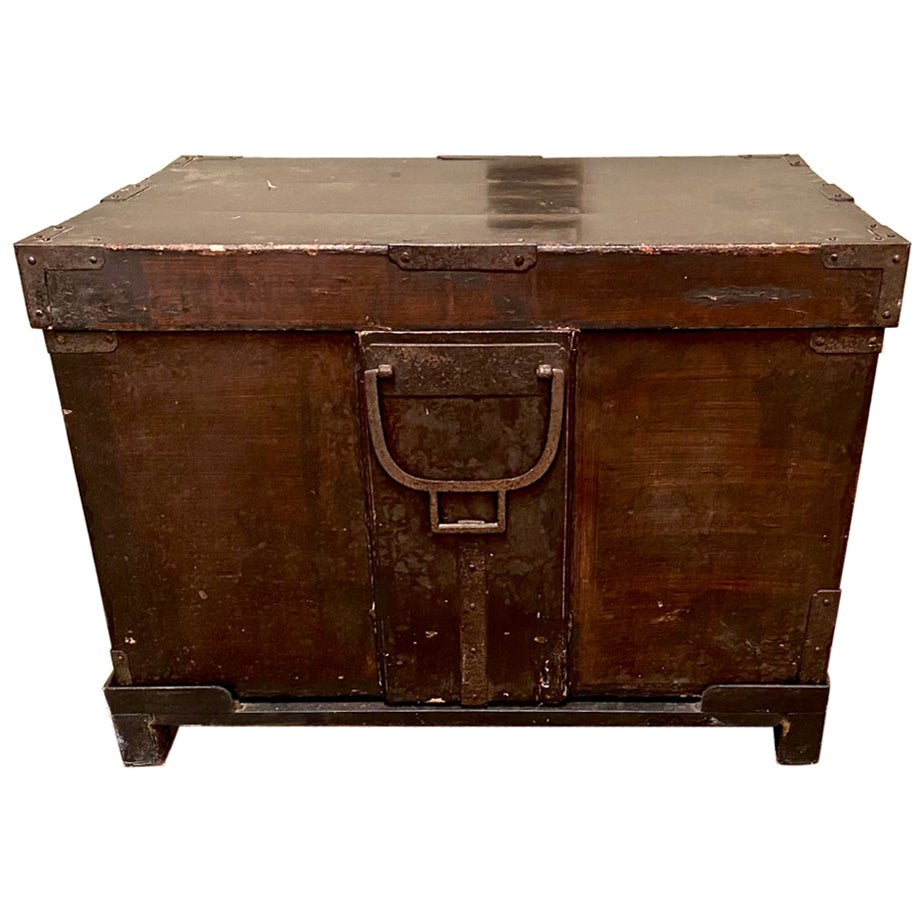 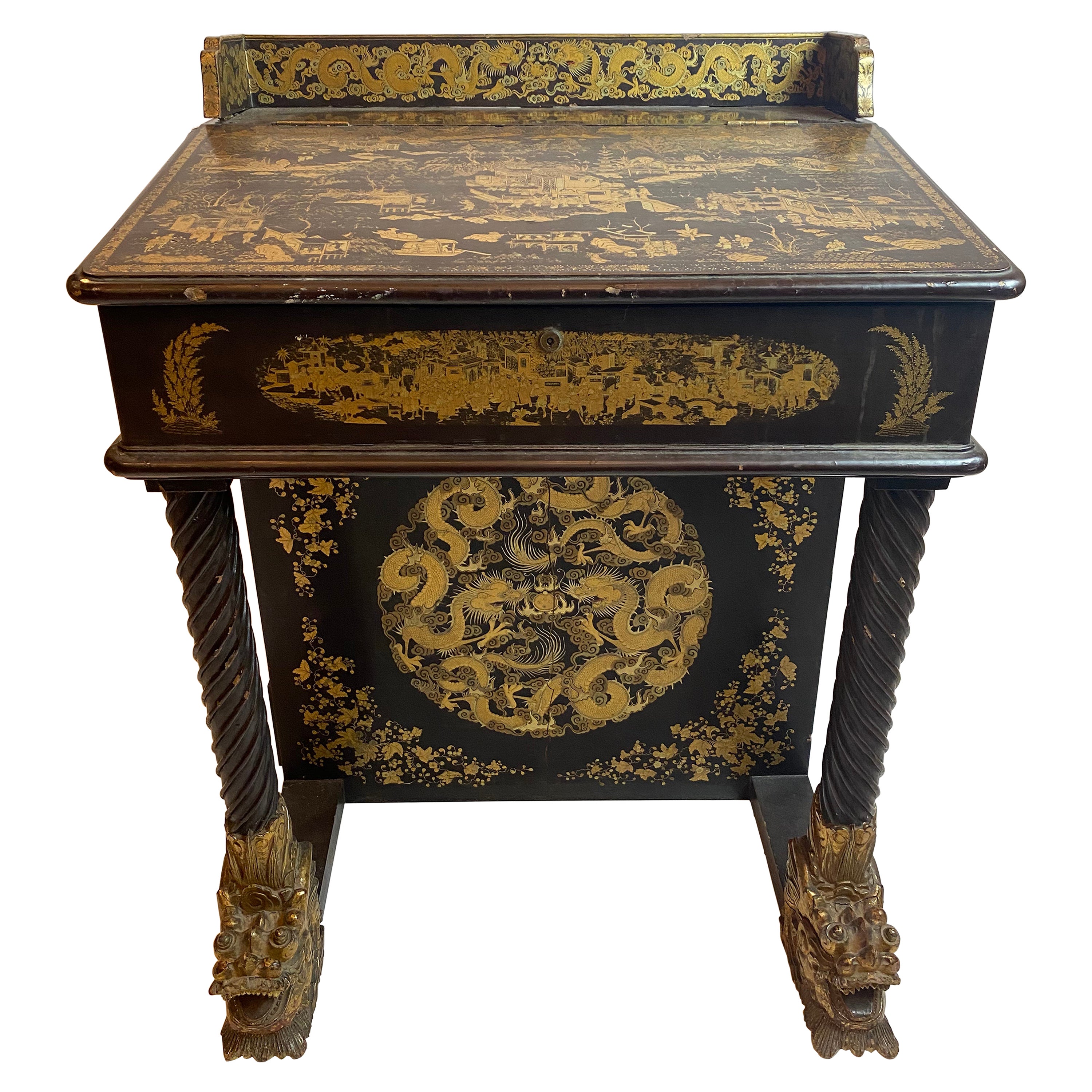 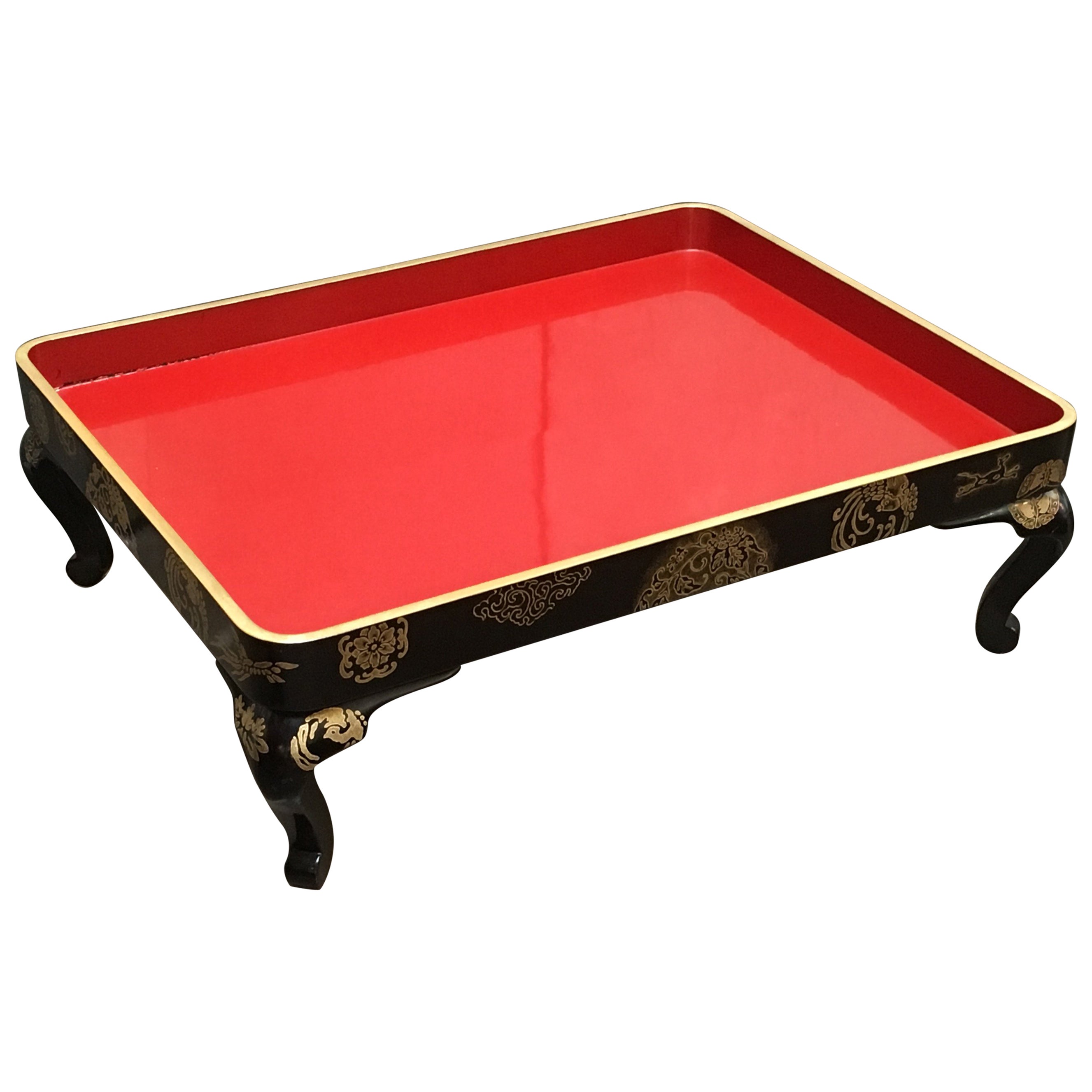 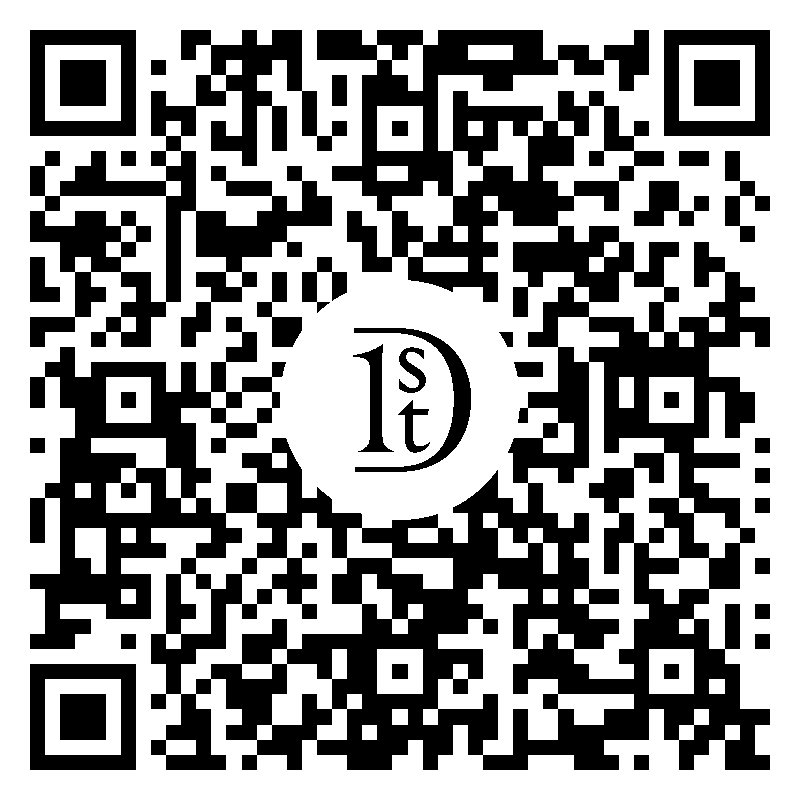 A fine and rare Japanese Kamakura-bori carved and red lacquered Buddhist altar table, Edo to Meiji period, mid-19th century, Japan. The Buddhist altar table of typical form, with dramatic flared legs that taper elegantly upwards to support a high waist and long altar top with upturned ends. Crafted in the Kamakura-bori technique, in which the wood is carved, then lacquered first with black lacquer, followed by red lacquer. The legs with carvings imitating brocade banners with an intricate manji diaper pattern ground. The carving continued up into the waisted section and terminating in large carved lotus buds. The high waisted mid section features a single large drawer, and is heavily carved with idyllic mountain and river landscape scenes to the front and back. The scenes reminiscent of Chinese shanshui (mountain and water) literati paintings. Carved scenes with sprays of chrysanthemum blossoms adorn the sides. All the scenes are framed with carved diaper patterned borders with the Tokugawa aoi (Hollyhock) mon to each of the corners. The top of the table features dramatic upturned ends exuberantly carved with a dense patterned of chrysanthemum flowers to the outer sides. The edges of the rectangular tabletop carved with a diaper ground motif, with the Tokugawa mon in each corner, as well as the ends of the upturned sections. The flat top of the table plain, showing wear from use, with the black lacquer being revealed in some areas, much like negoro lacquer. Although originally a Buddhist altar table, this exquisite table could be used as a small coffee table. Kamakura-bori is a Japanese lacquer technique in imitation of Chinese carved cinnabar lacquer. While Chinese carved cinnabar lacquer builds up layers of lacquer before carving, with Japanese Kamakura-bori lacquer, the underlying wood is first carved, then coated in a black lacquer, then a red lacquer. Kamakura-bori was a favored technique for Japanese Buddhist implements and furniture, such as this altar table. Measure: Height of tabletop: 18.75".

$3,125
19th Century Japanese Trunk
Located in Pasadena, CA
This is a good example of a 19th century Japanese small lacquered trunk that retains its original hardware and has been fitted to an appropriate wrought iron stand. The trunk feature...
Category

$23,800
Japanese Lacquer Cabinet
Located in Hudson, NY
With gold mons (family crests) of the Tokugawa family and all over design, gilded bronze hardware and four drawers. The Tokugawa family ruled from the 17th to the 19th century. Most ...
Category