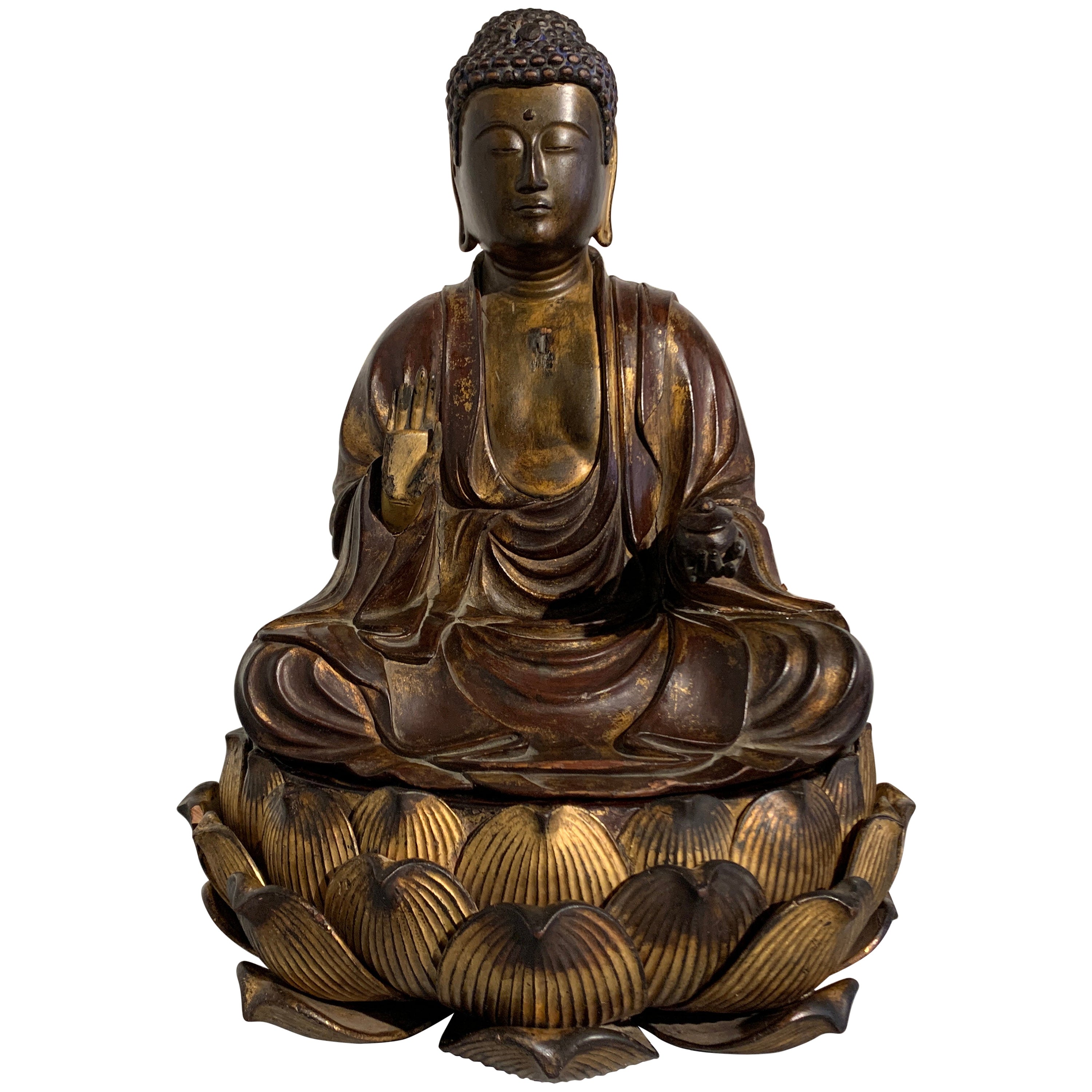 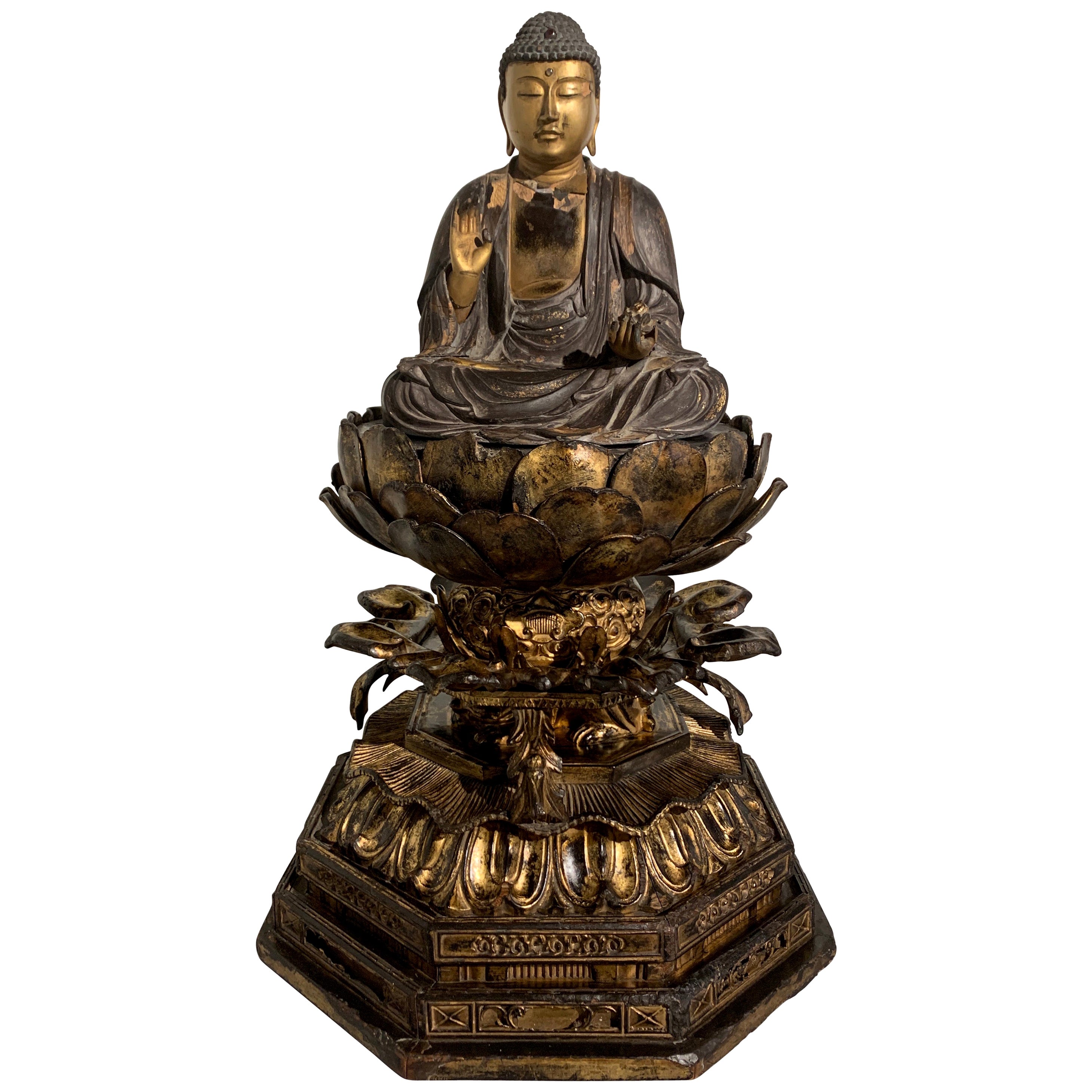 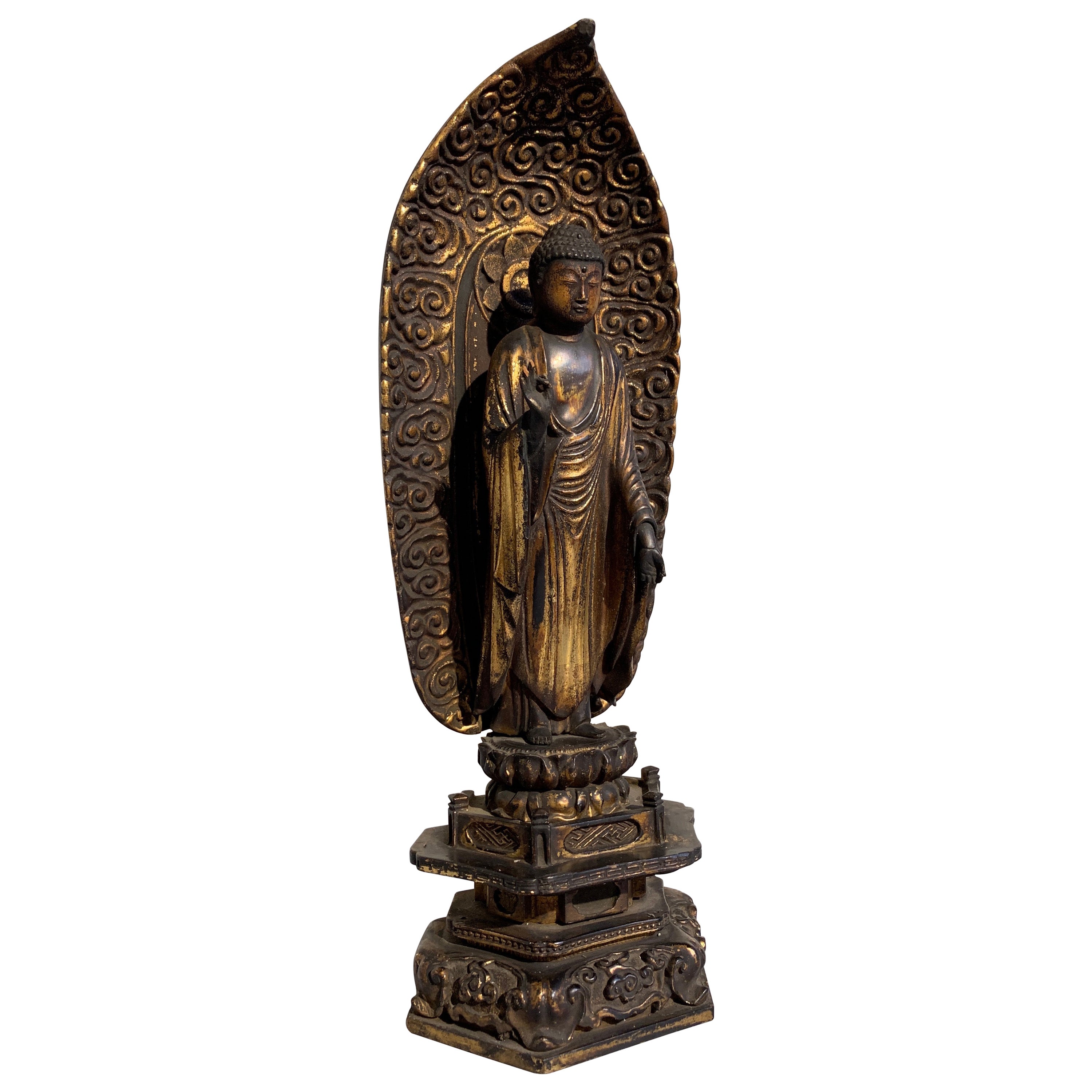 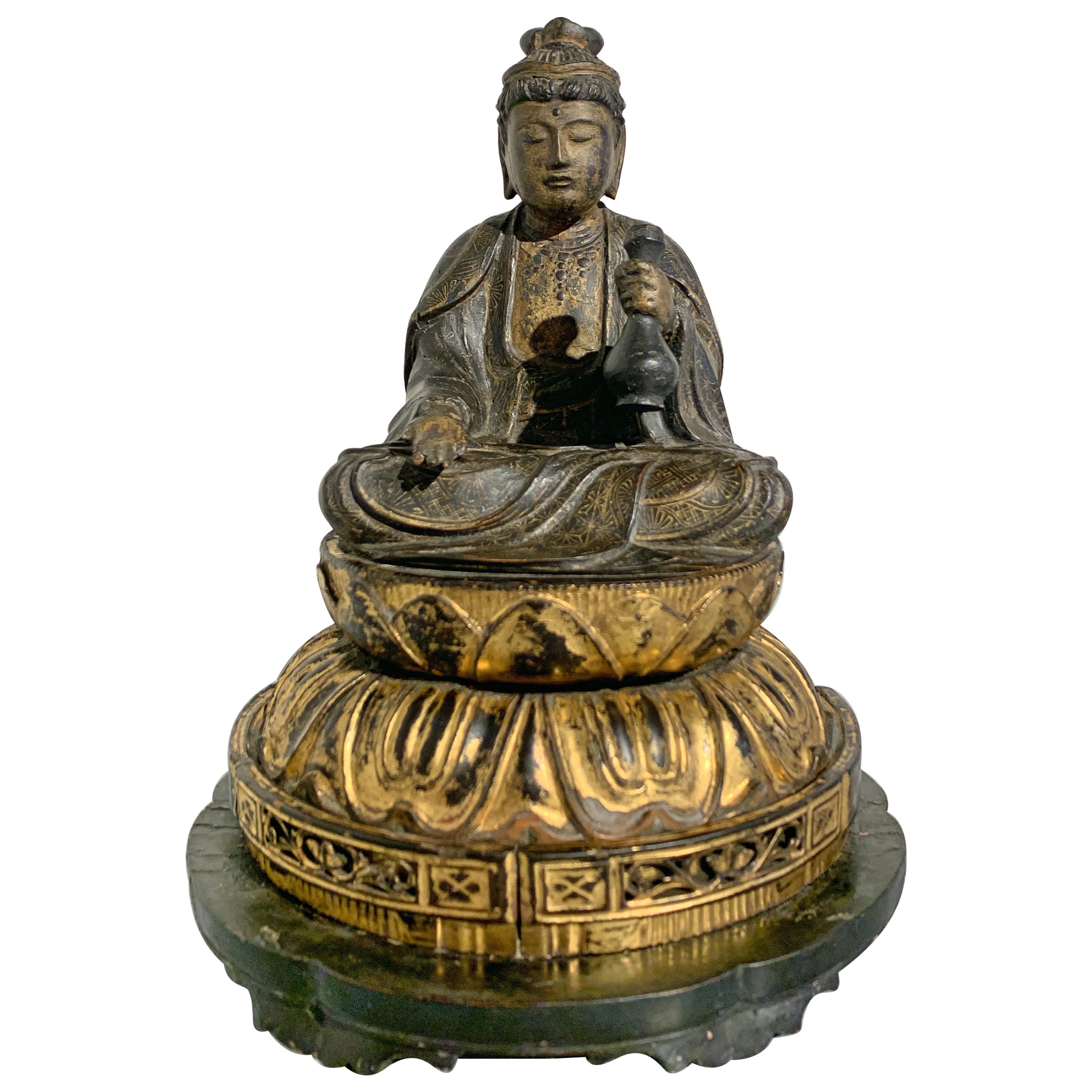 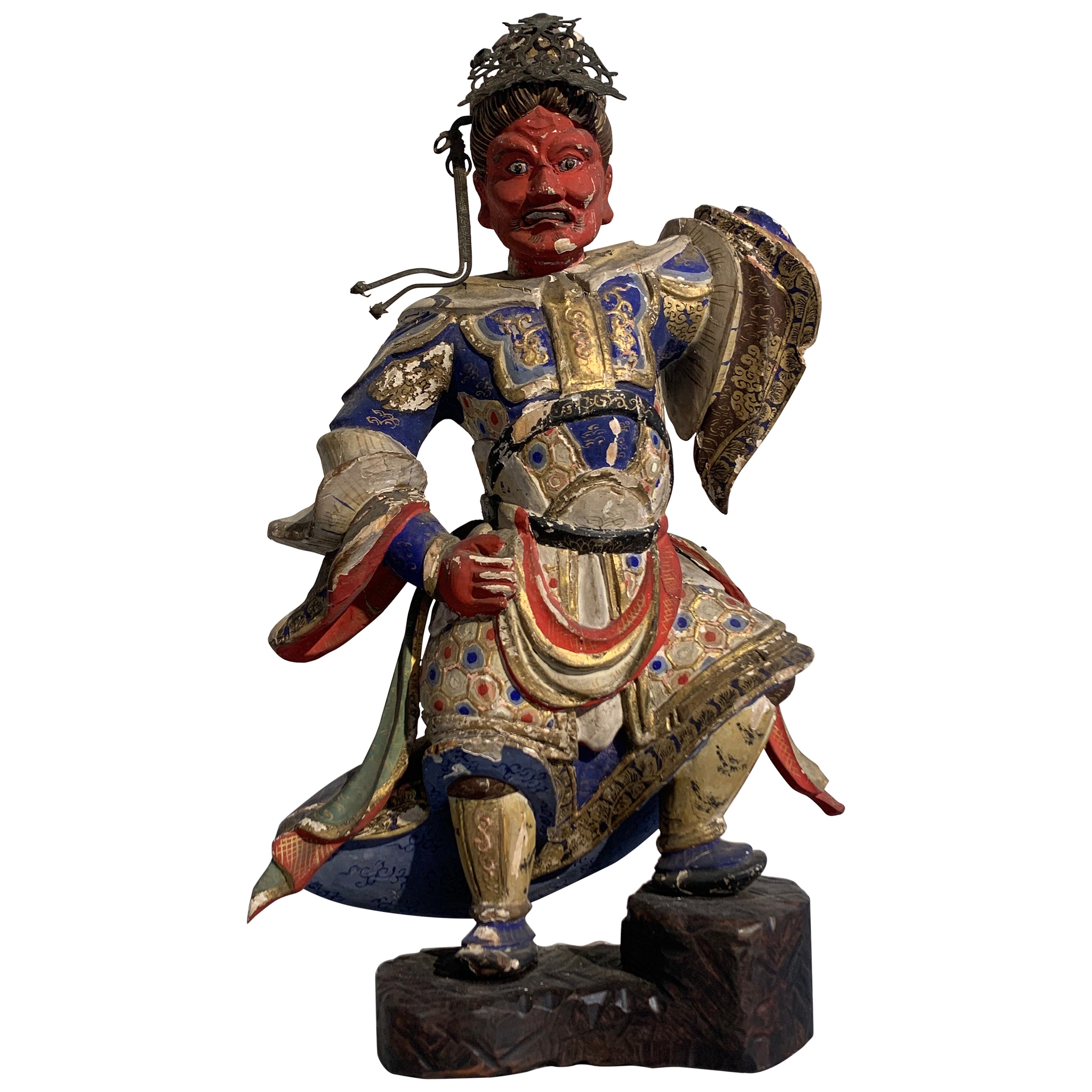 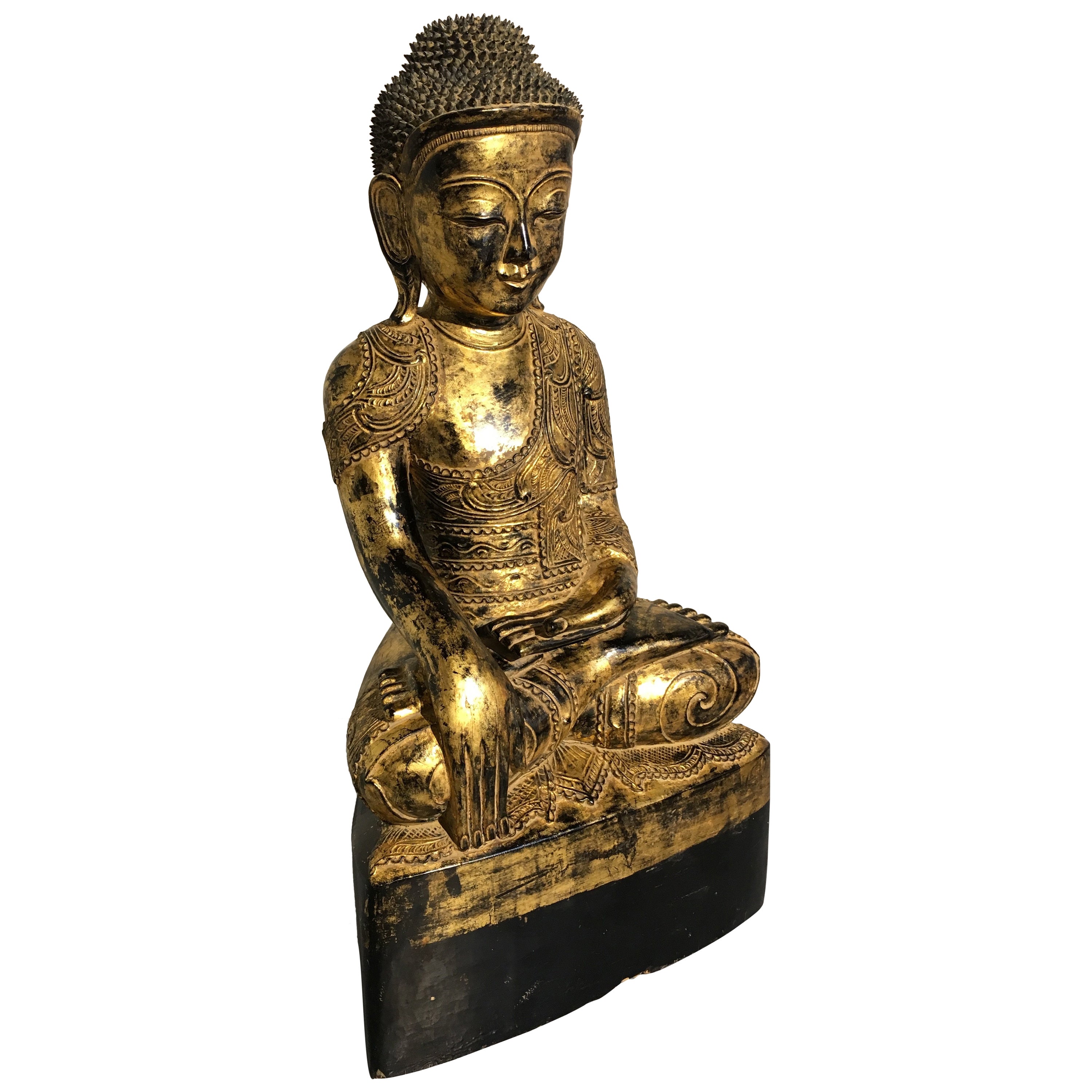 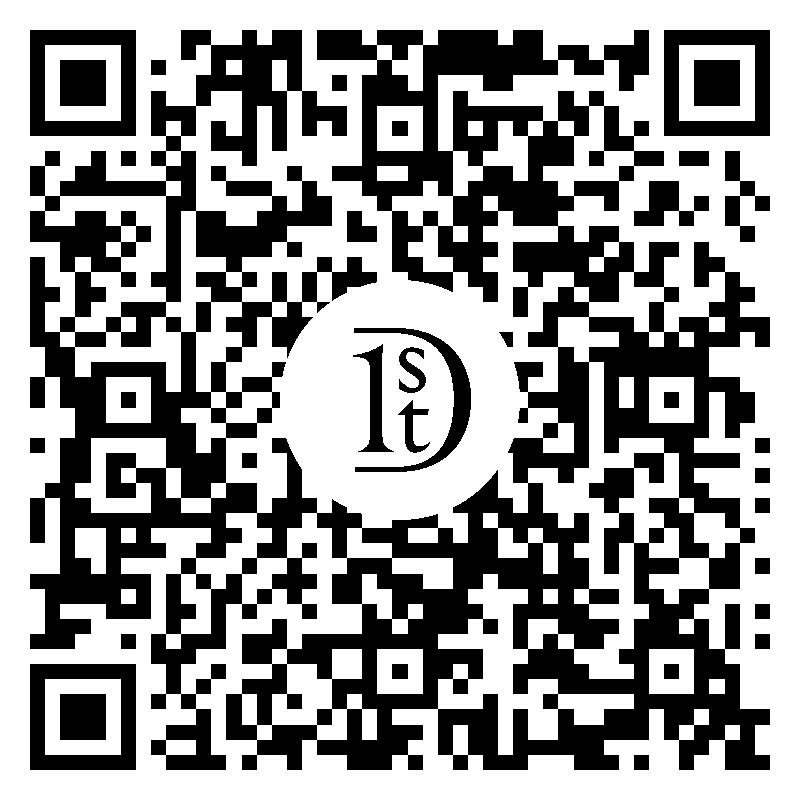 A magnificent Japanese carved and giltwood figure of the Medicine Buddha, Yakushi Nyorai, seated upon a double lotus pedestal supported by a multi-tiered stand, mid-Edo Period, late 18th century. Yakushi Nyorai, as the Medicine Buddha is known in Japan, is portrayed as a richly gilt figure seated upon a large double lotus pedestal supported by an elaborate and equally richly gilt multi-tiered stand. The stand featuring miniature carved and painted figures of the Four Heavenly Kings, Buddhist protectors and guardians of the cardinal directions. The Medicine Buddha wears a heavy robe that drapes beautifully around his broad shoulders, leaving his vigorous chest bare. He holds one hand up in abhaya mudra, the gesture or reassurance and fearlessness. His other hand rests on his knee, palm up and bent outwards. In lieu of the traditional medicine pot, Yakushi Nyorai curls his index finger to touch his thumb. Yakushi Nyorai's face is clam and serene. He stares outwards into the middle ground from heavily lidded eyes of inset rock crystal. Rock crystal spheres dot both his forehead and the front of his urna. His hair is neatly arranged in rows of tight coils and covered in blue pigment, the color associated with the Medicine Buddha.

Diamond Seller
These expertly vetted sellers are 1stDibs' most experienced sellers and are rated highest by our customers.
Established in 2001
1stDibs seller since 2010
142 sales on 1stDibs
Typical response time: 2 hours
More From This Seller
View All From Seller

$17,500
Cast Bronze Bust of Buddha on Wooden Base, Late 18th Century
Located in Cookeville, TN
Featured is a fabulous cast bronze Thai Buddha bust statue mounted on a wooden base. It has the features of a traditionally designed Buddha statue, including stylized crown and elong...
Category

$2,495 Sale Price
41% Off
Japanese Wooden Buddhist Sculpture of Amida Nyorai, 16th Century
Located in Milano, IT
The Amitabha (Amida in Japanese) Buddha is shown standing with his hands forming the Amida raigo-in mudra. The face has a serene expression, with closed eyes under delicately arched ...
Category

$37,110
Japanese Wood Carved Polychrome Sculpture of a Seated Temple Monk, Edo Period
Located in Studio City, CA
This is truly a wonderful piece with clear age and a nice patina to it. Very unique. We have not seen another quite like it. The monk appears to have glass eyes which gives his expre...
Category

$3,450
Rare Buddhist Carved Base for a Statue, Edo Period, 17th Century
Located in Prahran, Victoria
Rare and unusual hexagonal Buddhist base for a statue with a recumbent shi-shi (guardian lion dog), gilded and carved with inset glass eyes and painted with mineral pigments. Most ...
Category