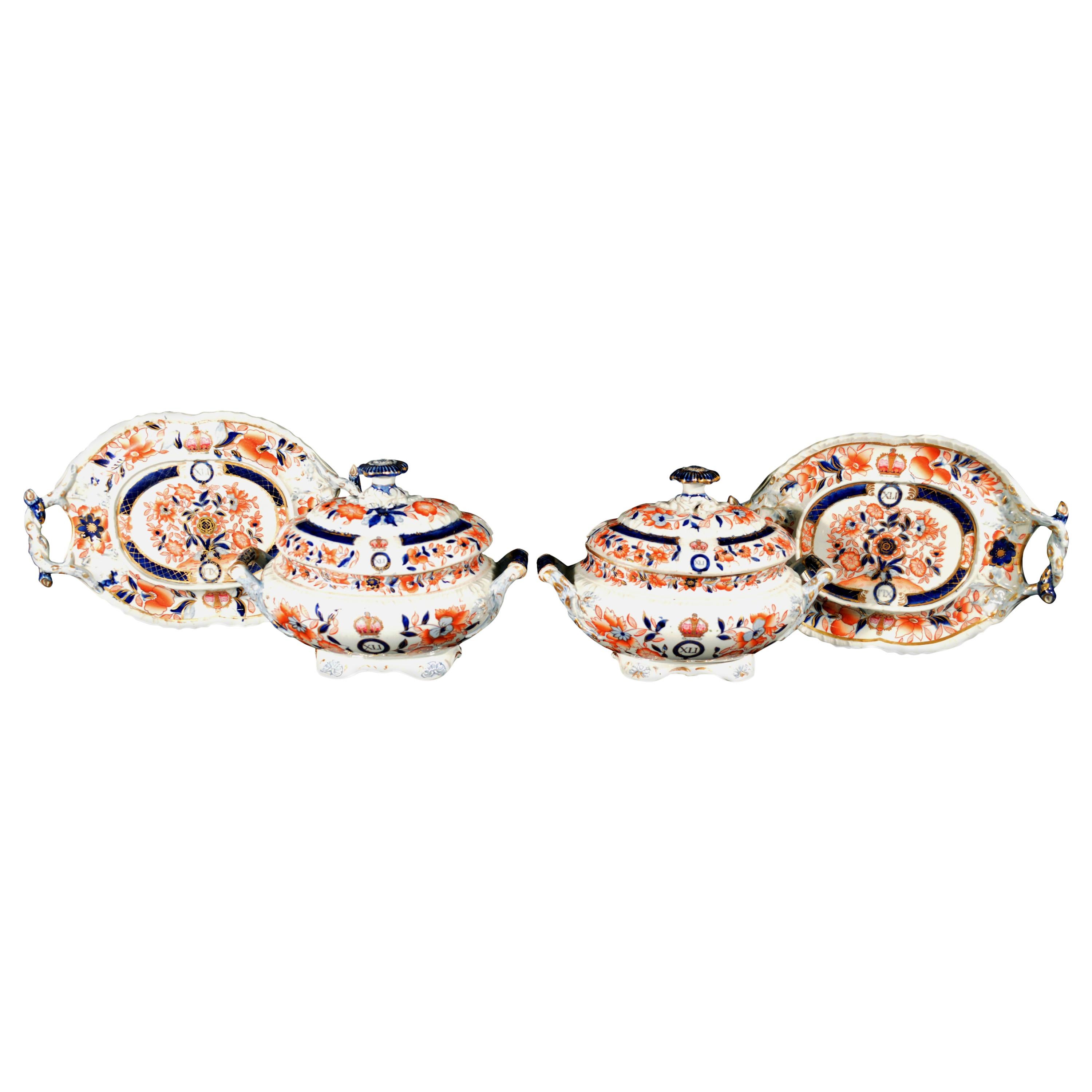 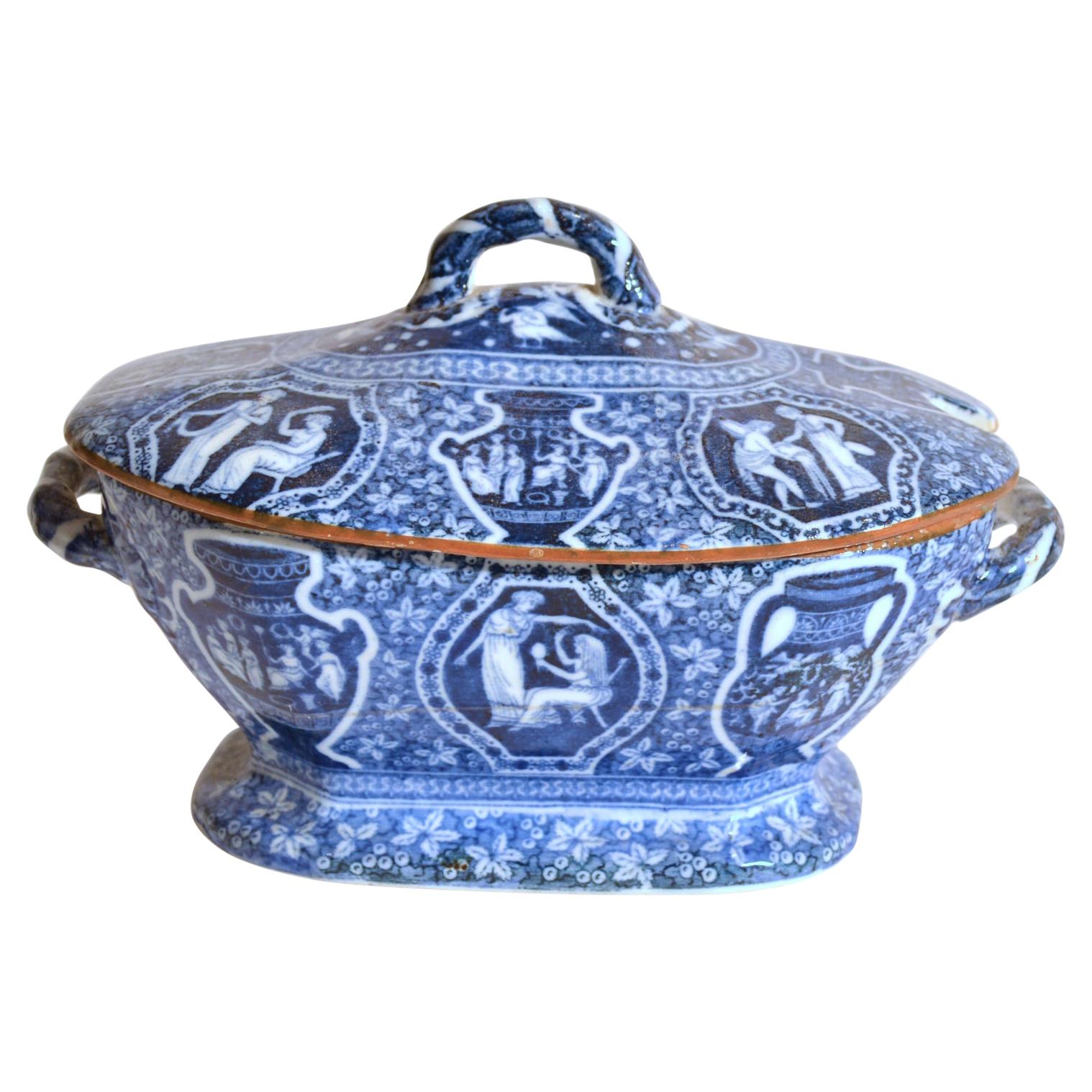 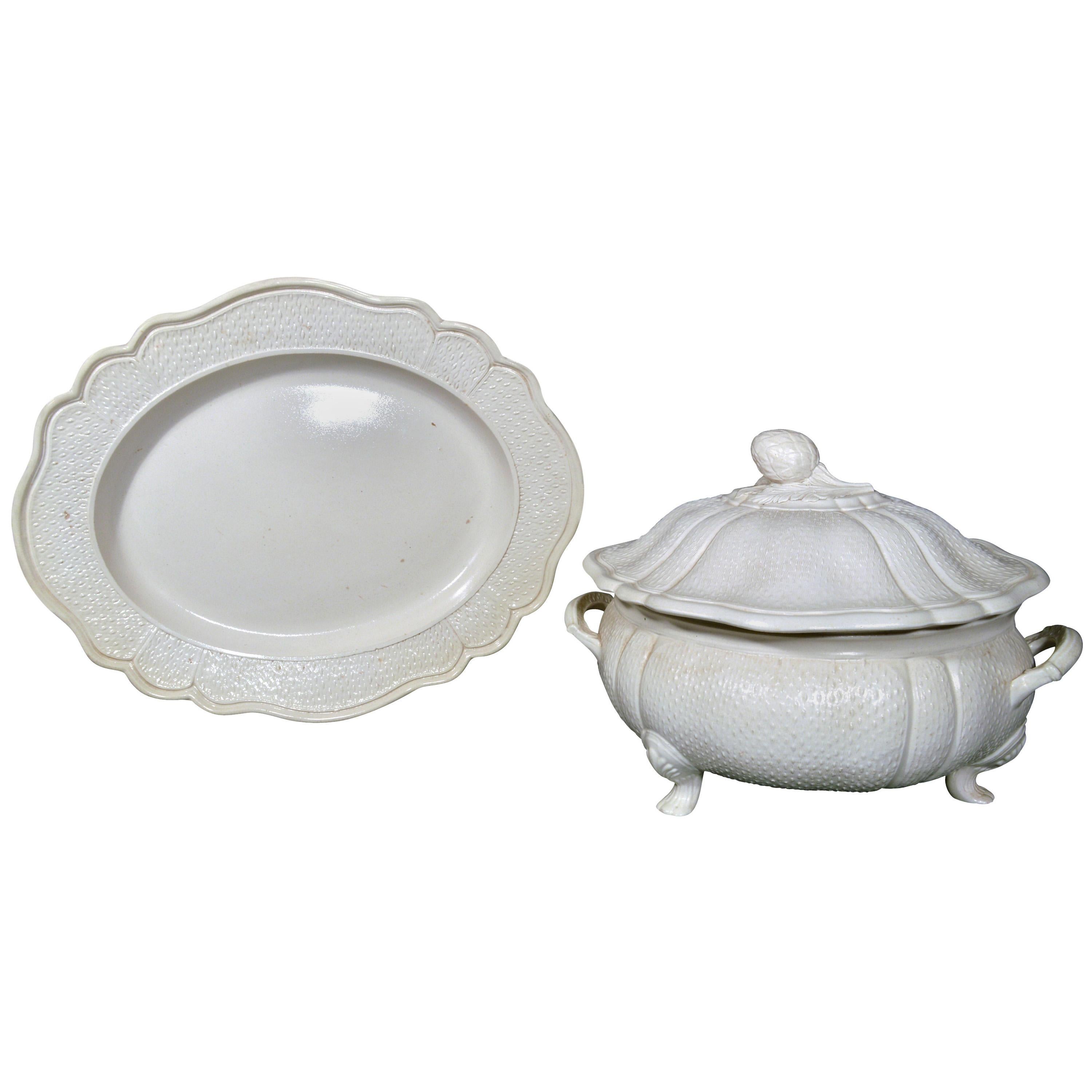 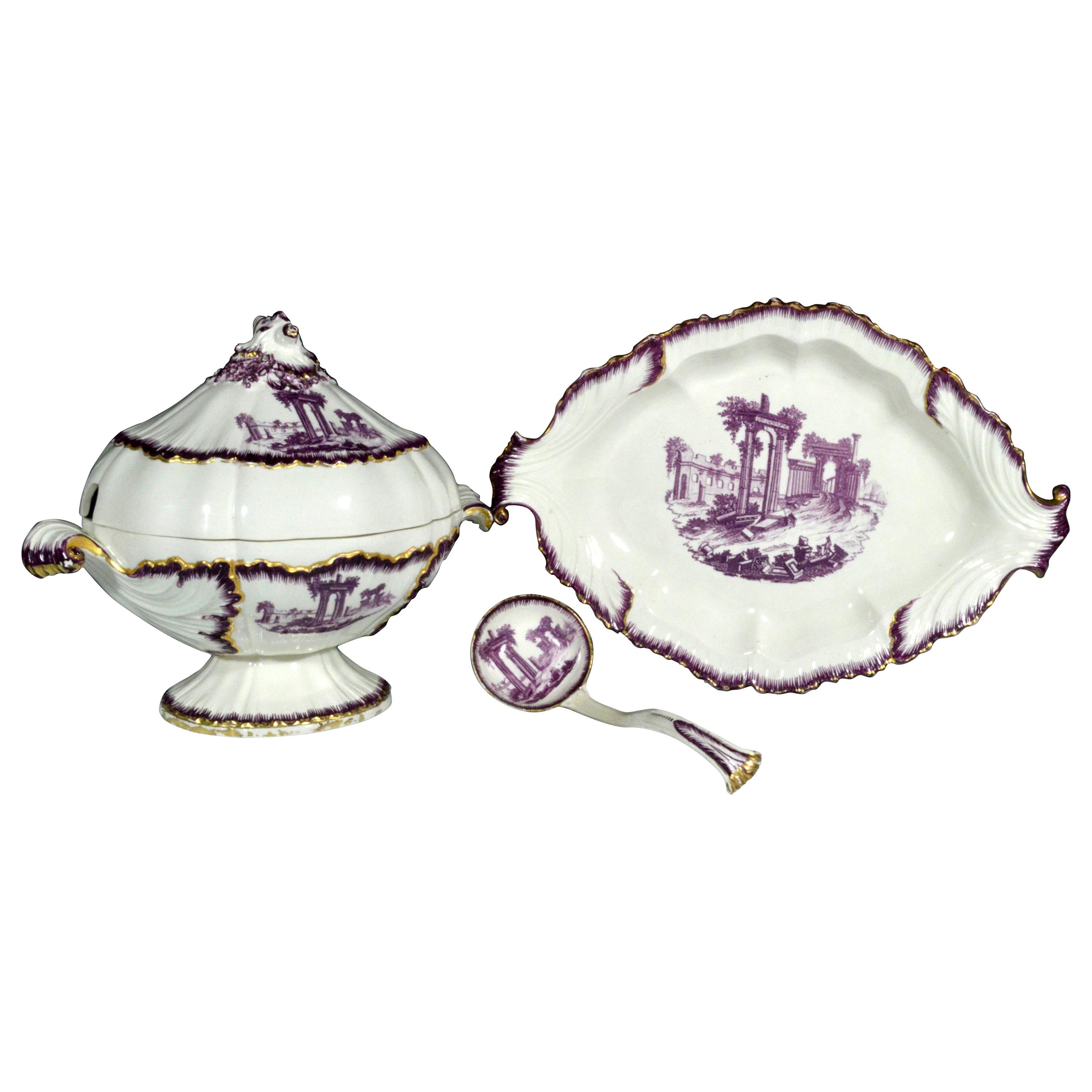 Wedgwood Pearlware Blue and White Covered Tureen and Stand, circa 1830 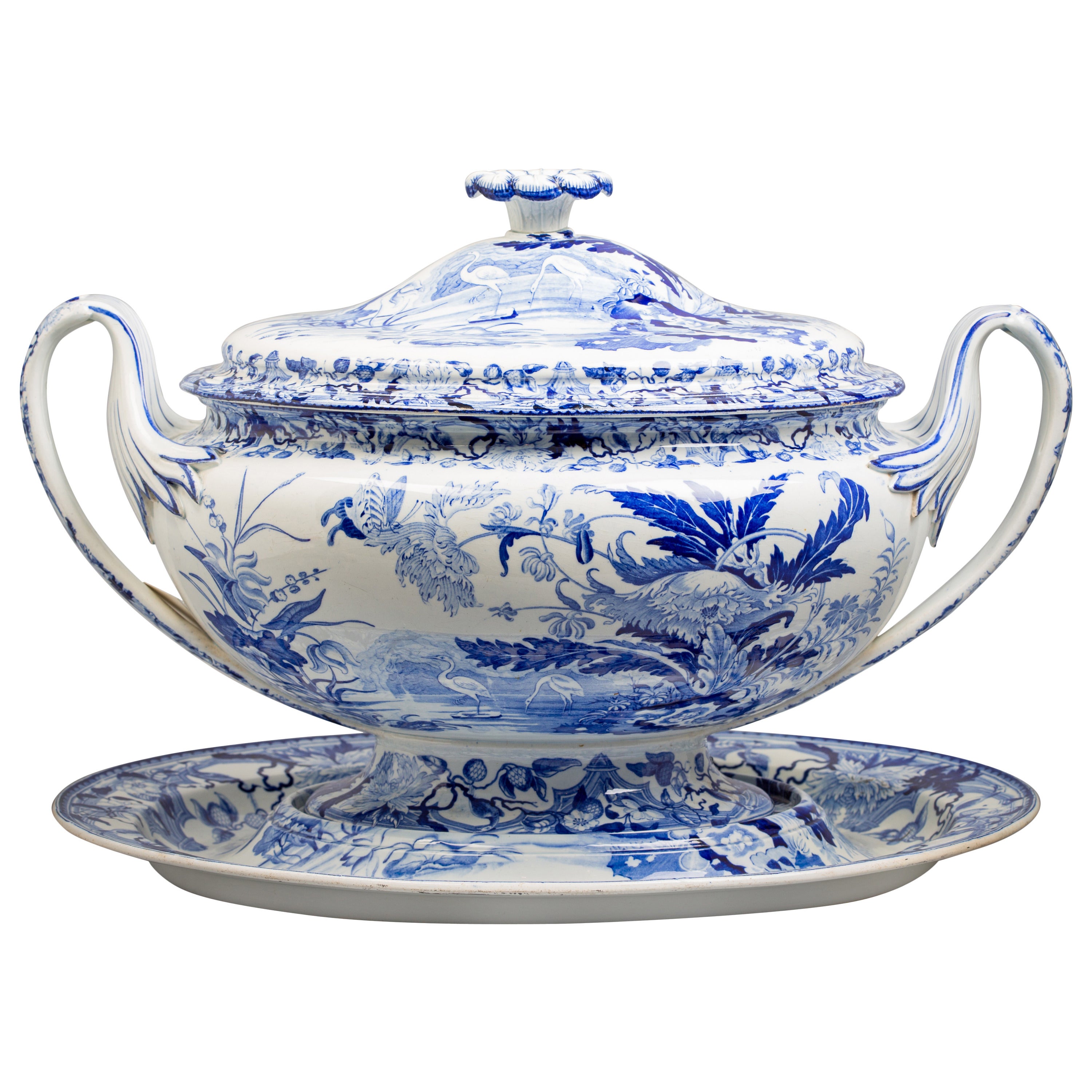 circa 1930s, Jugtown Covered Soup Tureen by Ben Own I 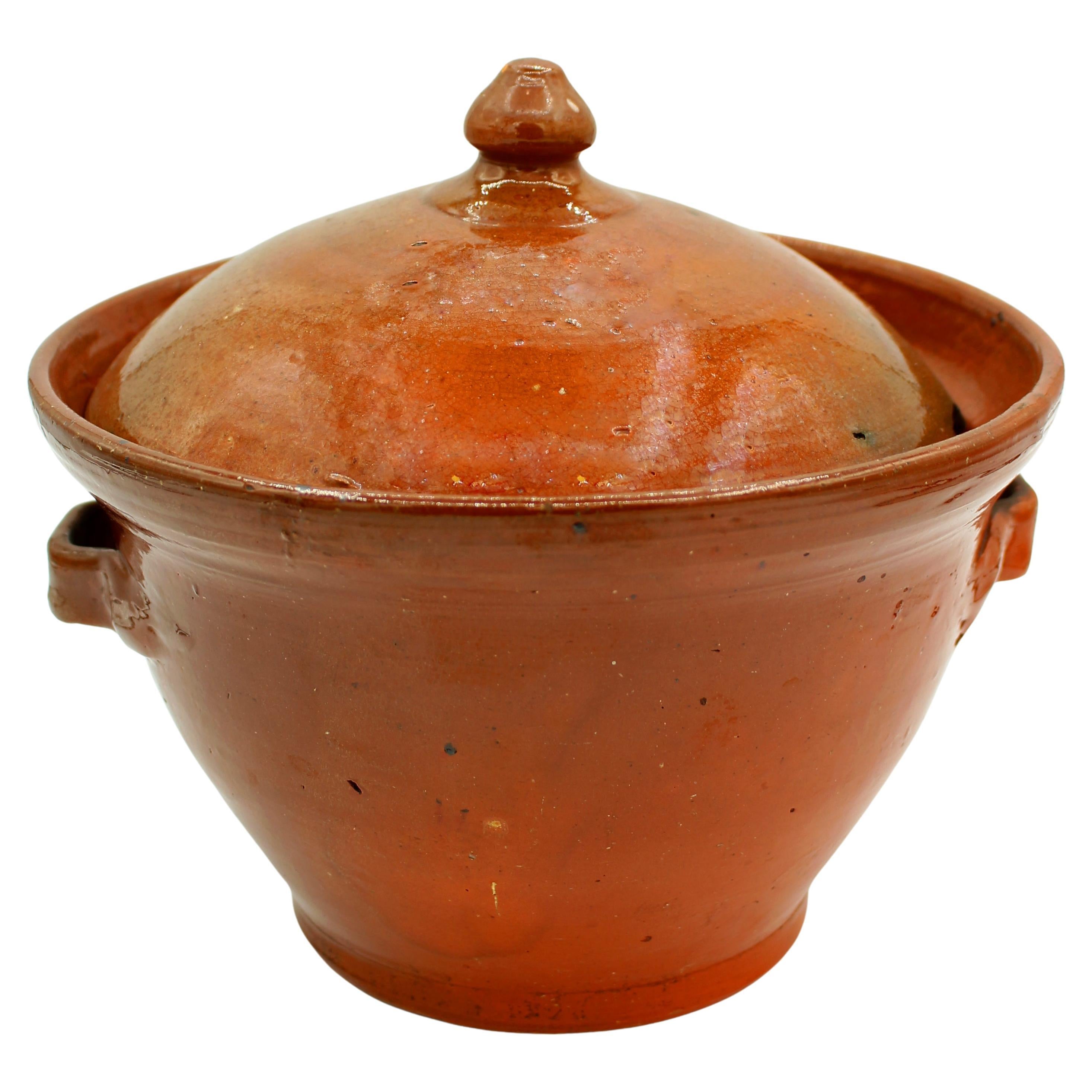 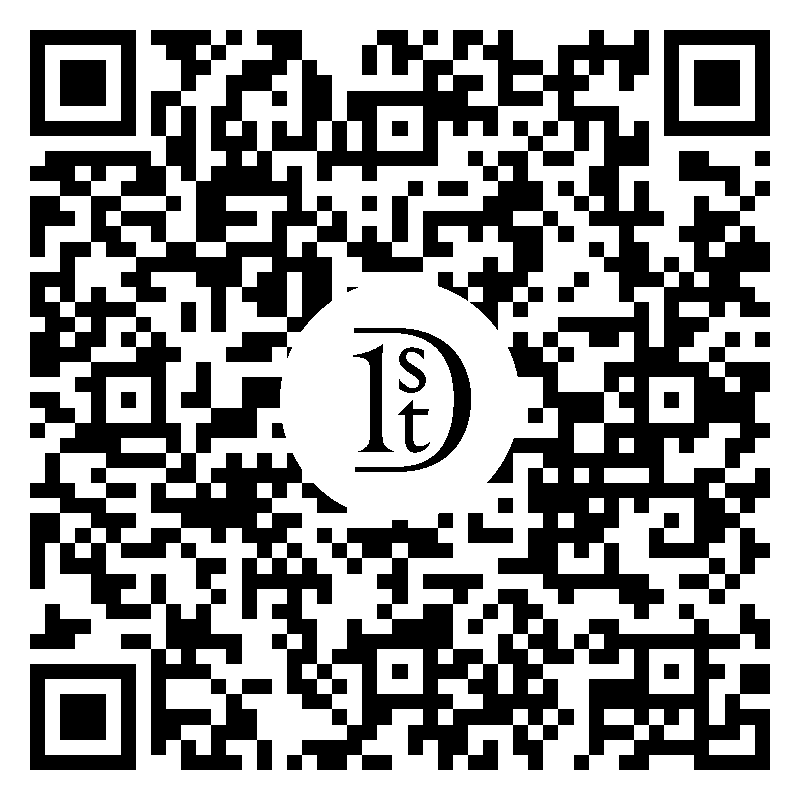 Wedgwood Nautilus Sauce Tureen, Cover & Stand with Rare Yellow Color, Circa 1790 The Wedgwood pearlware pottery sauce tureen, cover & stand is painted in shades of pink and yellow.  The yellow is a very rare colour to find.  The tureen is made in the form of a scallop shell with the foot of the tureen sitting in an indentation with a seaweed surround.  The finial is in the form of a worm cast. Dimensions: 7 inches high x 9 1/4 inches wide x 6 inches deep Reference: Wedgwood: Its Competitors & Imitators 1800-1830, Wedgwood International Seminar, page 9, Plate X for a nautilus centrepiece The Dwight and Lucille Beeson Wedgwood Collection at the Birmingham Museum of Art, page 279 for various pieces from a Nautilus dessert service. On page 161 is a discussion of the "Nautilus Service with a colour plate (#148) illustrating the centrepiece and stand in colours similar to this one and described as white ware with pink, yellow, orange and pale brown underglaze decoration, circa 1815. The chapter reads, "An amateur conchologist, Joshua Wedgwood I confessed in a letter to Bently on September 15, 1778: I have got my face over a shell drawer, & find my self in imminent danger of becoming a connoisseur. you can scarcely conceive the progress I have made in a month or two in the epp & very elaborate science of shell fancying. Having arranged my whole collection in the most systematic manner & studied them with the nicest attention, I can tell you, at sight, ...distinctions which you,..would not understand & might therefore under value. But this study, alass, like every other extension of the human mind, as it multiplies the avenues to our enjoyments discloses new sources of wants & anxieties, & at this present writing..a fine addition.. would make me the happiest of chonchiologists." The first pieces of Wedgwood's "Nautilus" service appeared in about 1790, and a copy of his original drawing for a tureen and stand and eight plates, the designs of which are correctly identified according to the terms used in conchology and titled "Wreathed Shell Dessert Coloured" is to be found in Wedgwood's pattern book and bears an 1802 watermark. 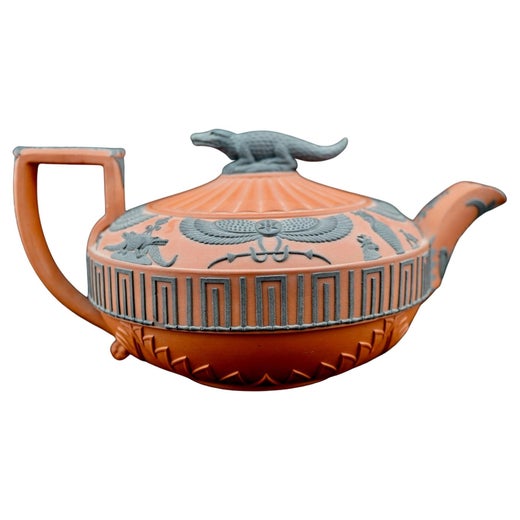 Arguably the most celebrated of all English ceramics makers, Wedgwood was founded in 1759 by Staffordshire potter Josiah Wedgwood (1730–95). The company is famed for its Jasperware — molded Neoclassical stoneware vases, plates and other pieces, inspired by ancient cameo glass, featuring white figures, scenes and decorative elements set in relief on a matte colored background. The best-known background hue is light blue, but Wedgwood’s iconic silhouettes also appear on green, lilac, yellow, black and even white grounds. Some pieces use three or more colors.

The Wedgwood firm first came to prominence for its tableware, which quickly gained favor in aristocratic households throughout Britain and Europe. In 1765, Wedgwood was commissioned to create a cream-colored earthenware service for Queen Charlotte, consort of King George III. The queen was so thrilled with her new china that Wedgwood was given permission to call himself “Potter to Her Majesty,” and the decorative style became known as Queen’s Ware. Not to be outdone, Catherine the Great of Russia commissioned her own set of Wedgwood china in 1773. Nearly 200 years later, the firm created a 1,200-piece service for the coronation of Queen Elizabeth II. In recent years, leading designers including Jasper Conran and Vera Wang have collaborated with Wedgwood — in the tradition of such distinguished 18th century artists such as the painter George Stubbs and metalsmith Matthew Boulton.

From plates and other dinnerware to decorative items like urns, cachepots and candlesticks, Wedgwood designs lend a traditional air to Anglophile interiors. And even if you have to make your own tea, you may find it comforting to sip it from a delicate cup that was manufactured in the same Stoke-on-Trent kiln that produced Her Majesty’s tea service. Be sure to keep your pinky raised.

About the Seller
5.0
Located in Downingtown, PA
Recognized Seller
These prestigious sellers are industry leaders and represent the highest echelon for item quality and design.
Gold Seller
These expertly vetted sellers are highly rated and consistently exceed customer expectations.
Established in 1916
1stDibs seller since 2009
311 sales on 1stDibs
Typical response time: 1 hour
Associations
The Art and Antique Dealers League of AmericaAntiques Associations Members
More From This SellerView All
You May Also Like