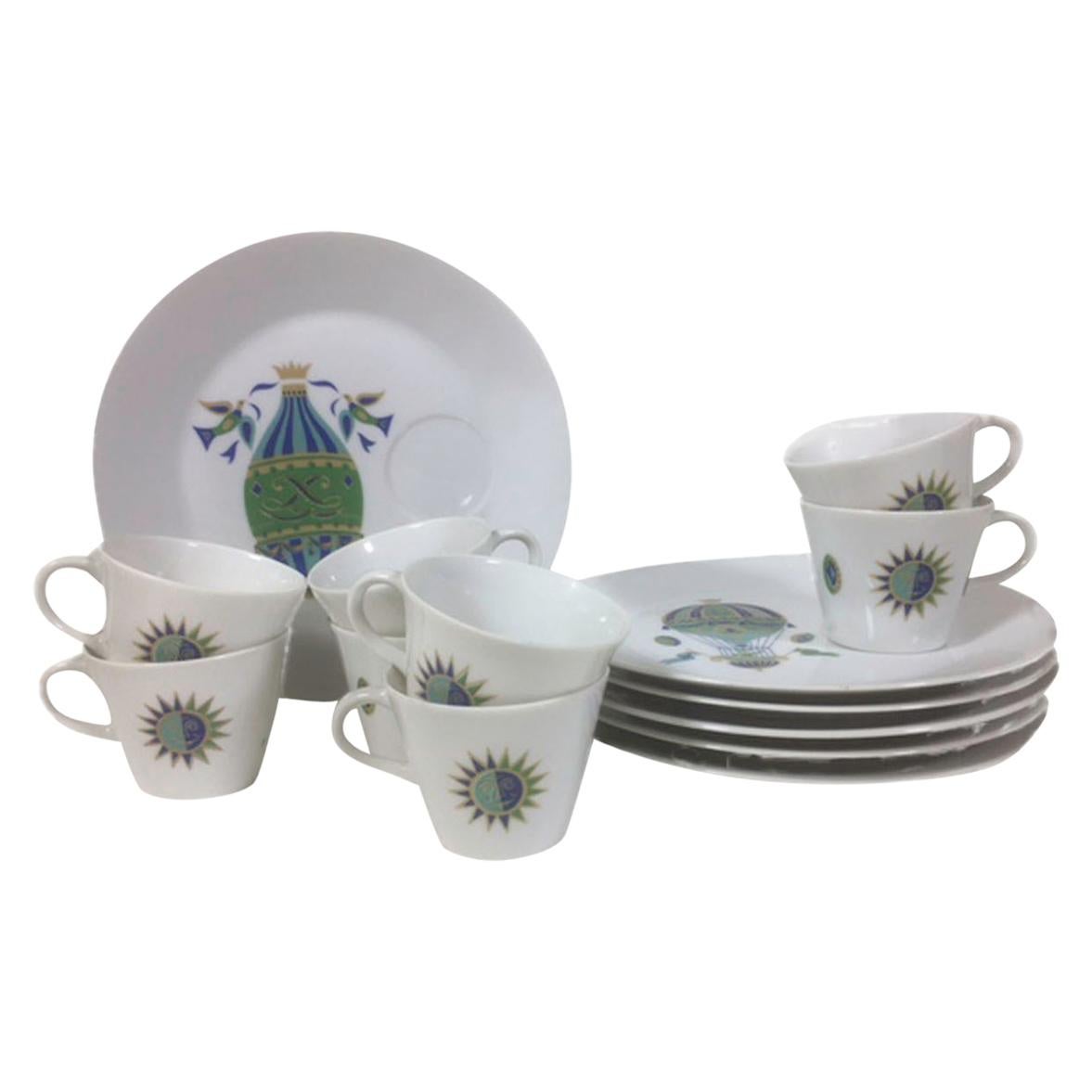 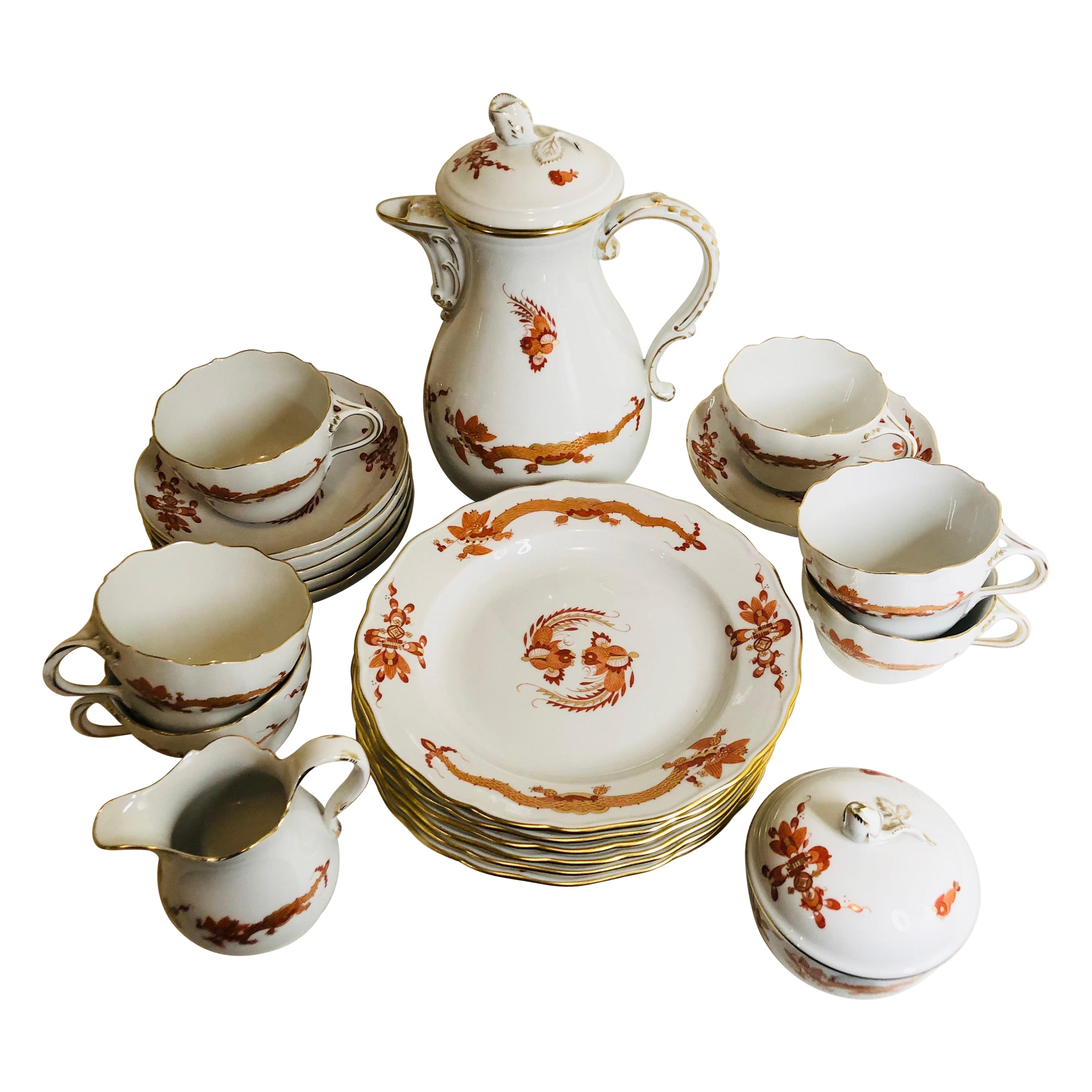 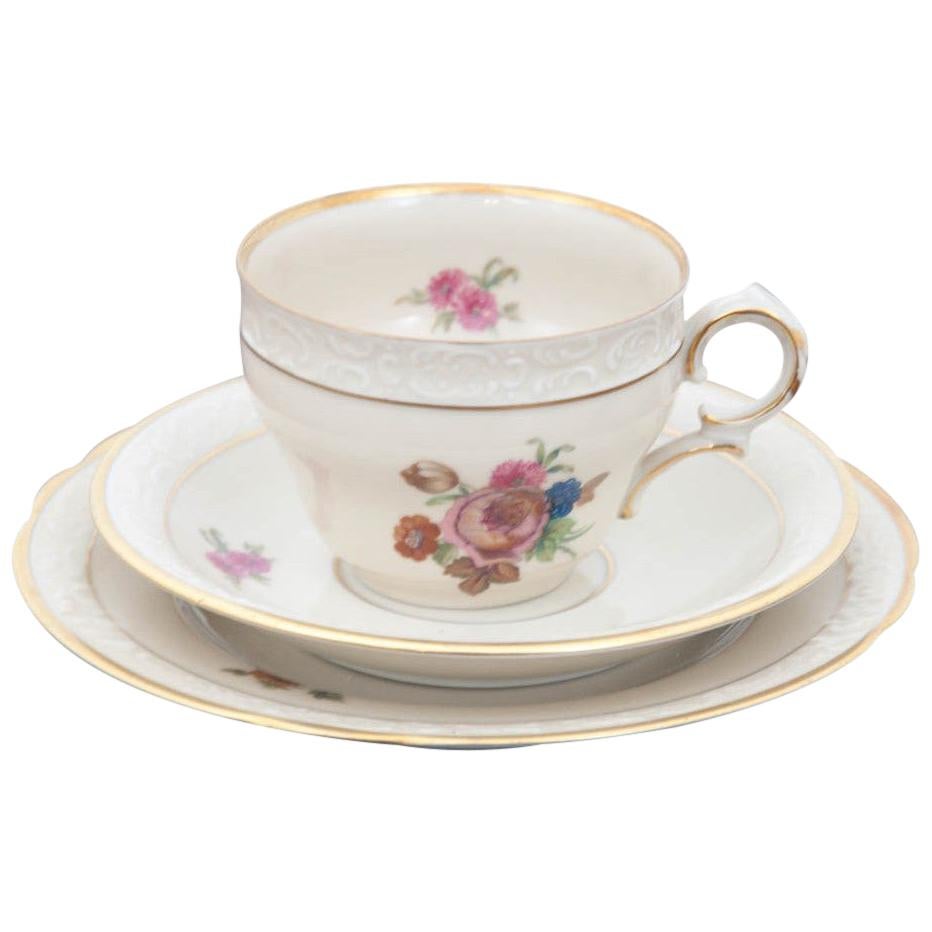 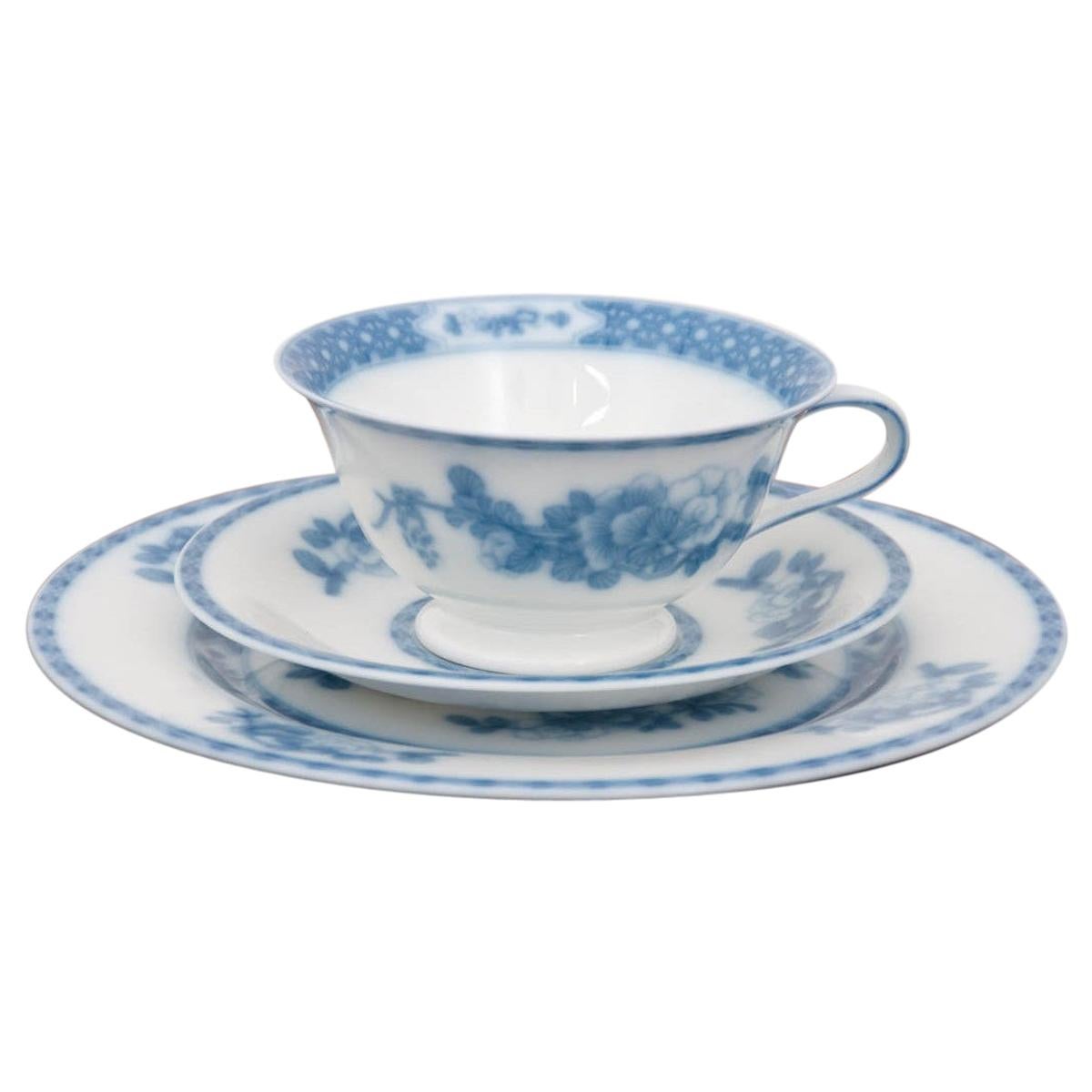 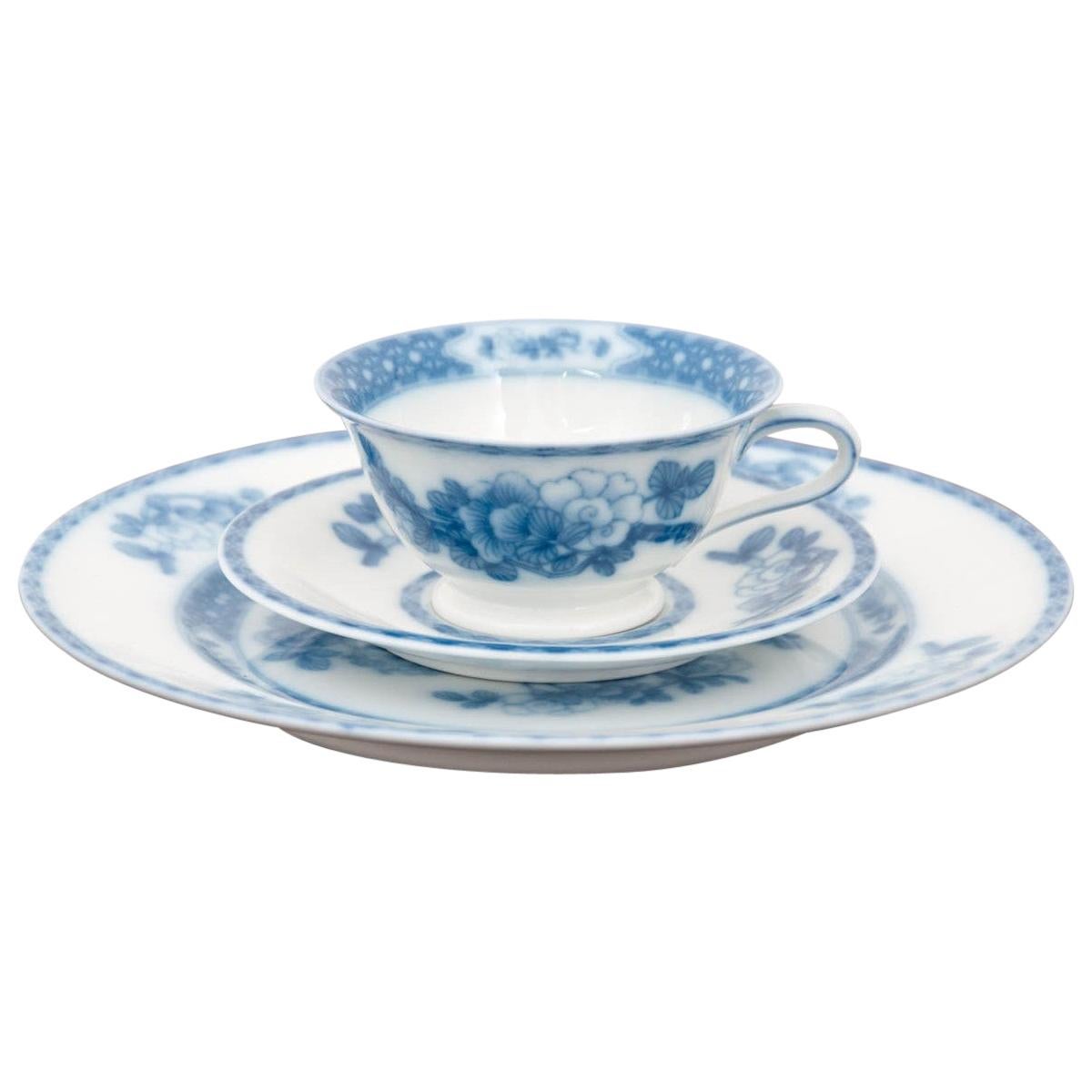 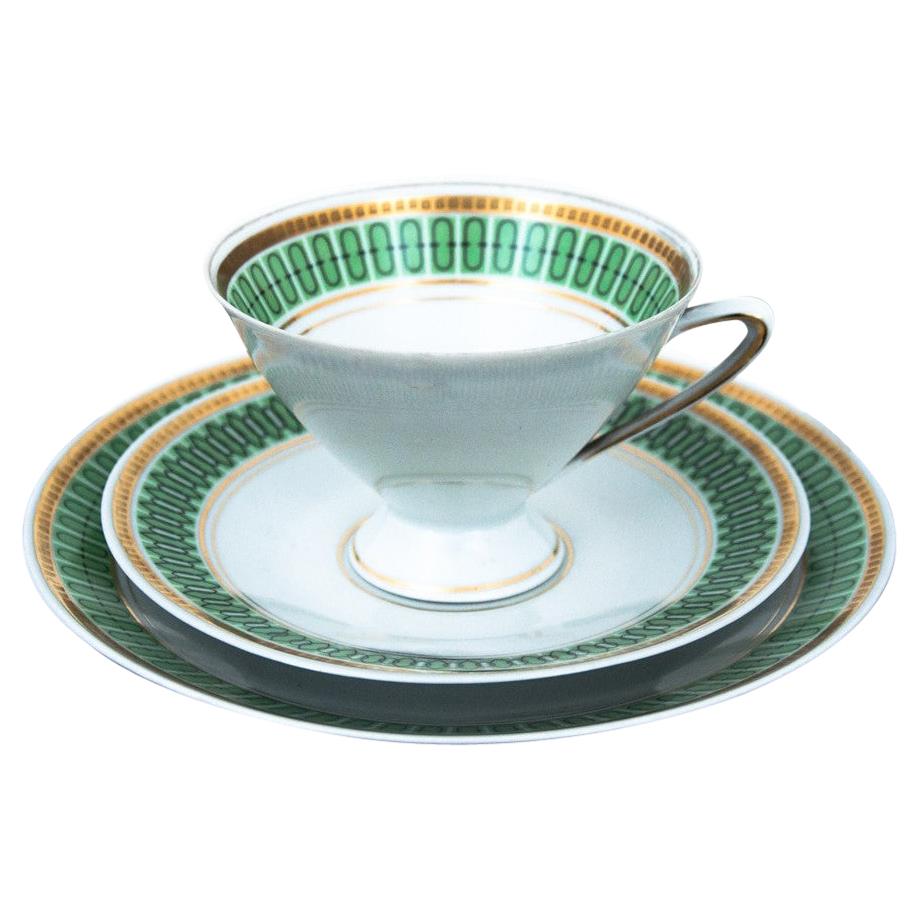 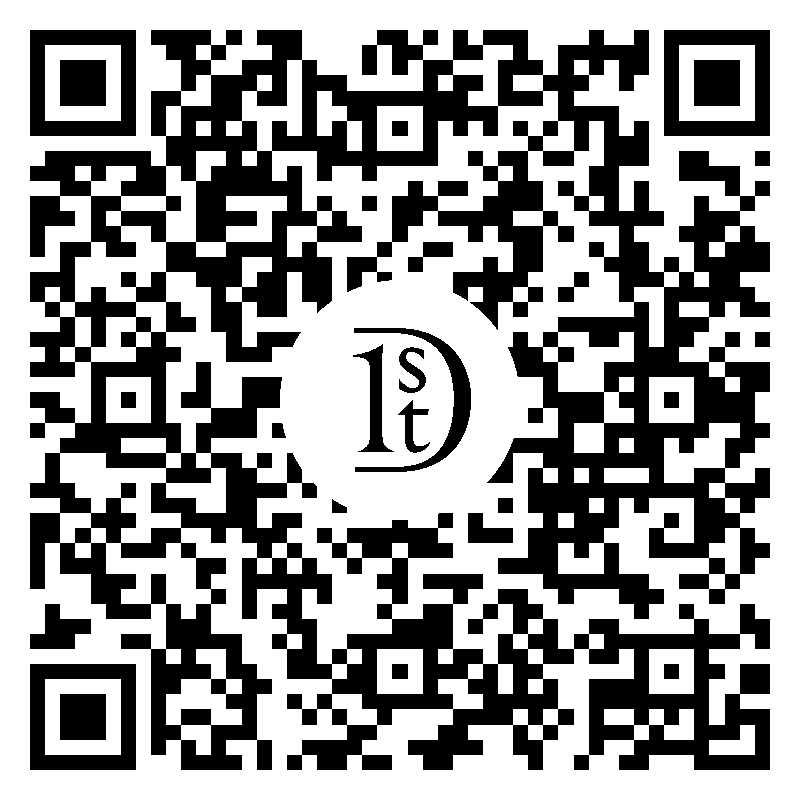 Georges Briard Hot Air Balloon dessert or snack set with matching footed serving plate. Service for 8. There are 4 different fanciful balloon styles. Each plate has circular depression for the cup. The cups are decorated with stylized sun images. The set is decorated in blues, greens, and gold colors on white ceramic. Rare full set with matching footed serving plate in excellent condition. 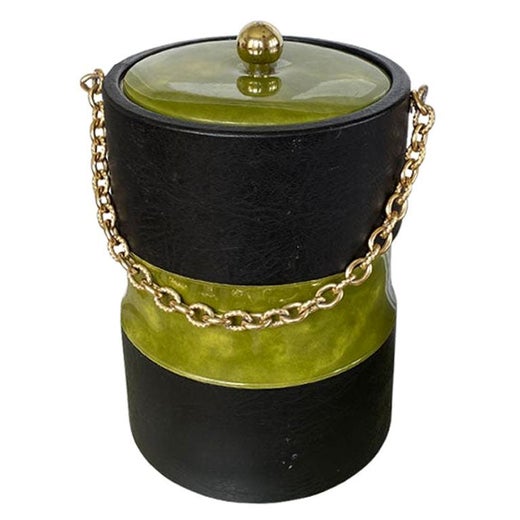 Artist and designer Georges Briard (1917–2005) — a name that has for more than a century been a marker of spectacular and stylish vintage glassware, serveware and other household objects — was born Jascha Brojdo in Russian Ukraine.

Brojdo grew up in Poland and moved to the United States in the 1930s, studying art at the University of Chicago and the Art Institute of Chicago before serving in the U.S. Army during World War II. After the war, he began hand-painting metal serving trays while working for Max Wille of M. Wille Company, where Wille suggested changing his name to distinguish his commercial work from his fine art.

As Georges Briard, Brojdo created award-winning designs for items including glasses, trays, coffeepots and dishes in materials like glass, ceramics, metal and wood; he even created gold-plated serveware. His serveware was especially popular from the 1950s to ’70s. It was produced by companies including Culver, Pfaltzgraff and Mdina Glass and sold at high-end department stores like Neiman Marcus and Bonwit Teller. His designs have a signature opulence, evoking the mid-century modern aesthetic of his time as well as borrowing elements from Art Nouveau and Venetian styles, while the quirky, playful barware pieces he produced featured peacock feathers, skulls and tennis balls.

With colorful, intricate patterns and motifs such as butterflies, Christmas trees and Piet Mondrian-esque geometric abstractions, Georges Briard glasses and dishes were found in the homes of the most fashionable hosts of the mid-century. Today, they are highly prized by collectors.

Find a collection of Georges Briard vintage bar glasses, serving trays and other goods on 1stDibs.

About the Seller
5.0
Located in Stamford, CT
Vetted Seller
These experienced sellers undergo a comprehensive evaluation by our team of in-house experts.
Established in 1994
1stDibs seller since 2004
187 sales on 1stDibs
Typical response time: 5 hours
More From This Seller

$625 / set
Meissen Rich Court Dragon Tea Set with Six Dessert Plates and 6 Cups & Saucers
By Meissen Porcelain
Located in Boston, MA
This is a fabulous Meissen rich court dragon tea set which includes a teapot, a sugar and creamer, six cake plates and six cups and saucers. Both the teapot and the covered sugar hav...
Category

$3,500 / set
Breakfast Set Cup with Saucer and Plate, Damaged
Located in Chorzów, PL
Ancient cup with a saucer and saucer Origin: Denmark Signed Kobenhavns Porcellains Maleri Damaged cup in the middle of the crack visible in the photo.
Category

$280 Sale Price / set
20% Off
Meissen Pink Indian Blumen Set With Demitasse Pot, Sugar & Creamer & 6 Cups
By Meissen Porcelain
Located in Boston, MA
This is a wonderful pink Indian Blumen demitasse set, which includes a demitasse pot, a sugar and creamer and six demitasse cups and saucers. This is a perfect set for expresso or ho...
Category

$1,800 / set
Meissen Streublumen Tea Set with 4 Cups and Saucers and Covered Sugar & Creamer
By Meissen Porcelain
Located in Boston, MA
This is a beautiful Meissen streublumen tea set. It has a teapot, a sugar and a creamer and four cups and saucers. The teapot and the covered sugar have raised roses on top, as you c...
Category

$1,895 / set
Meissen Purple Indian Tea Set With Six Cups and Saucers And Serving Tray
By Meissen Porcelain
Located in Boston, MA
This is a beautiful Meissen purple Indian tea set comprising of a teapot, sugar and creamer, six tea cups and saucers and a serving tray. The teapot and the covered sugar are decorat...
Category