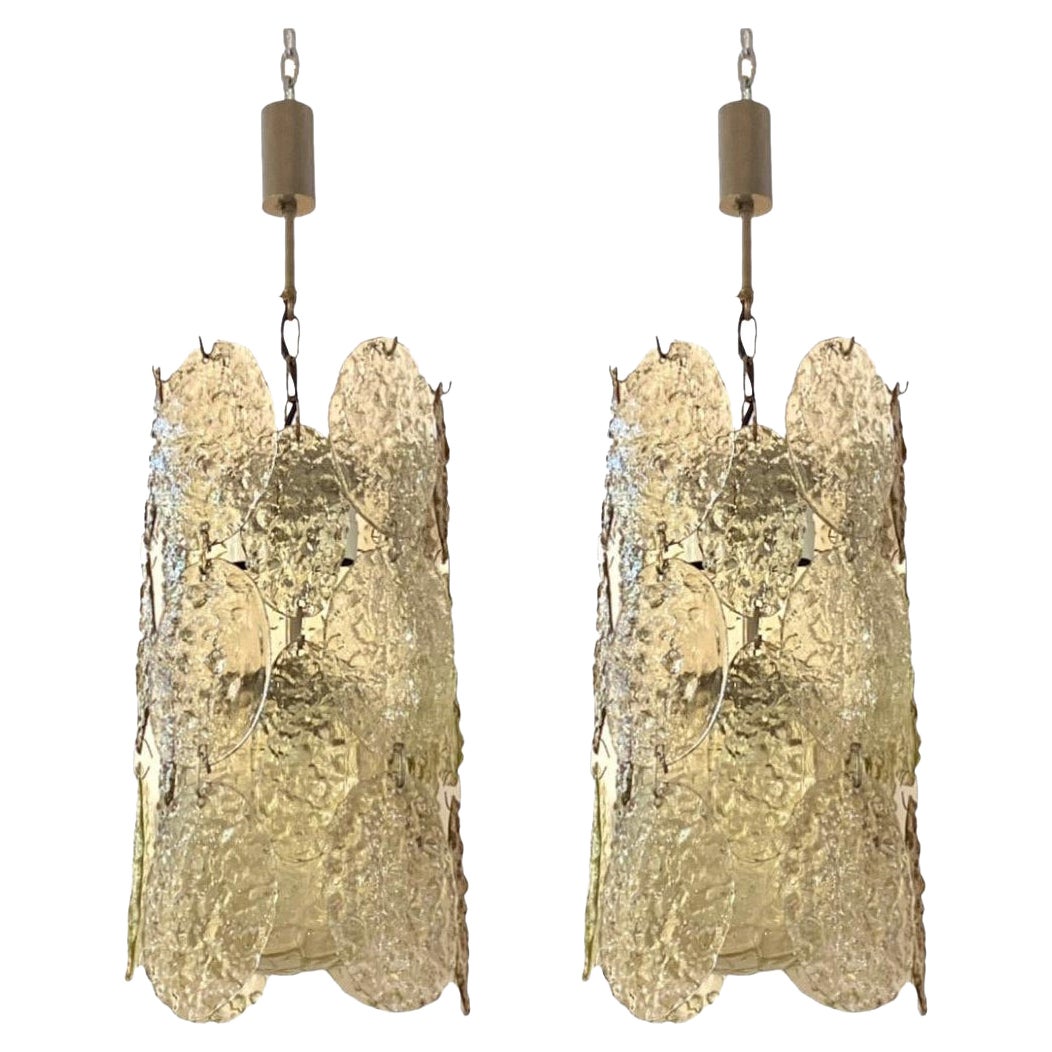 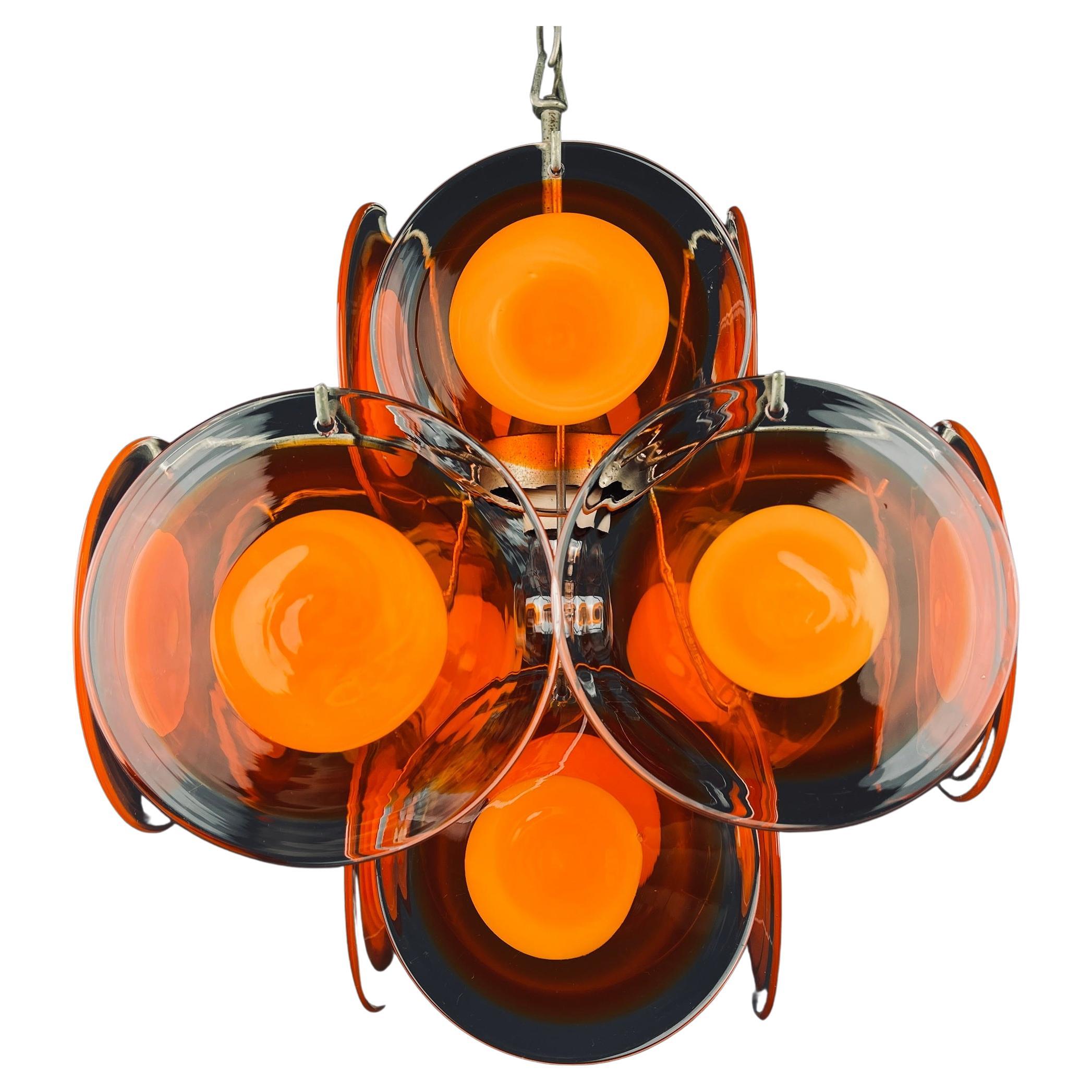 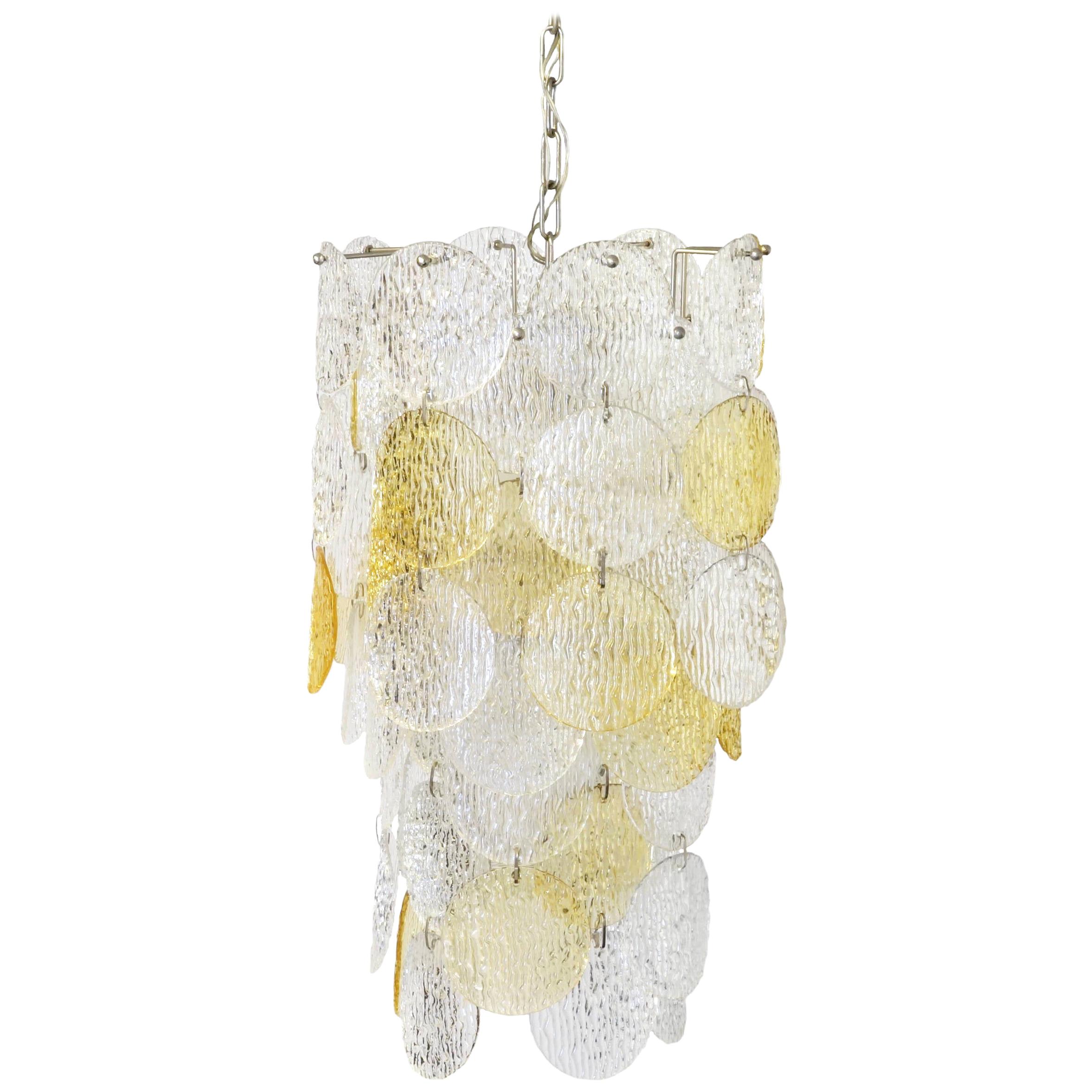 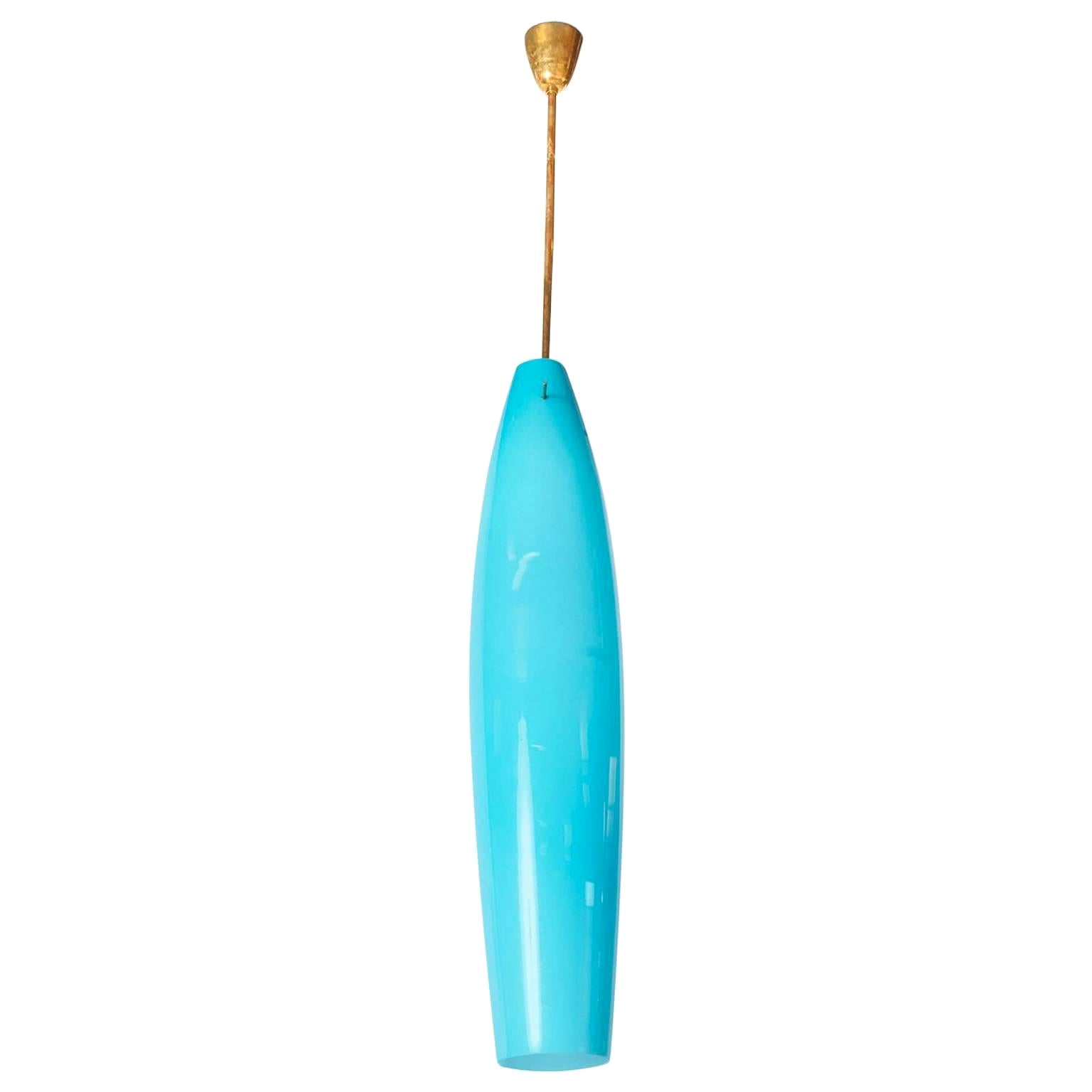 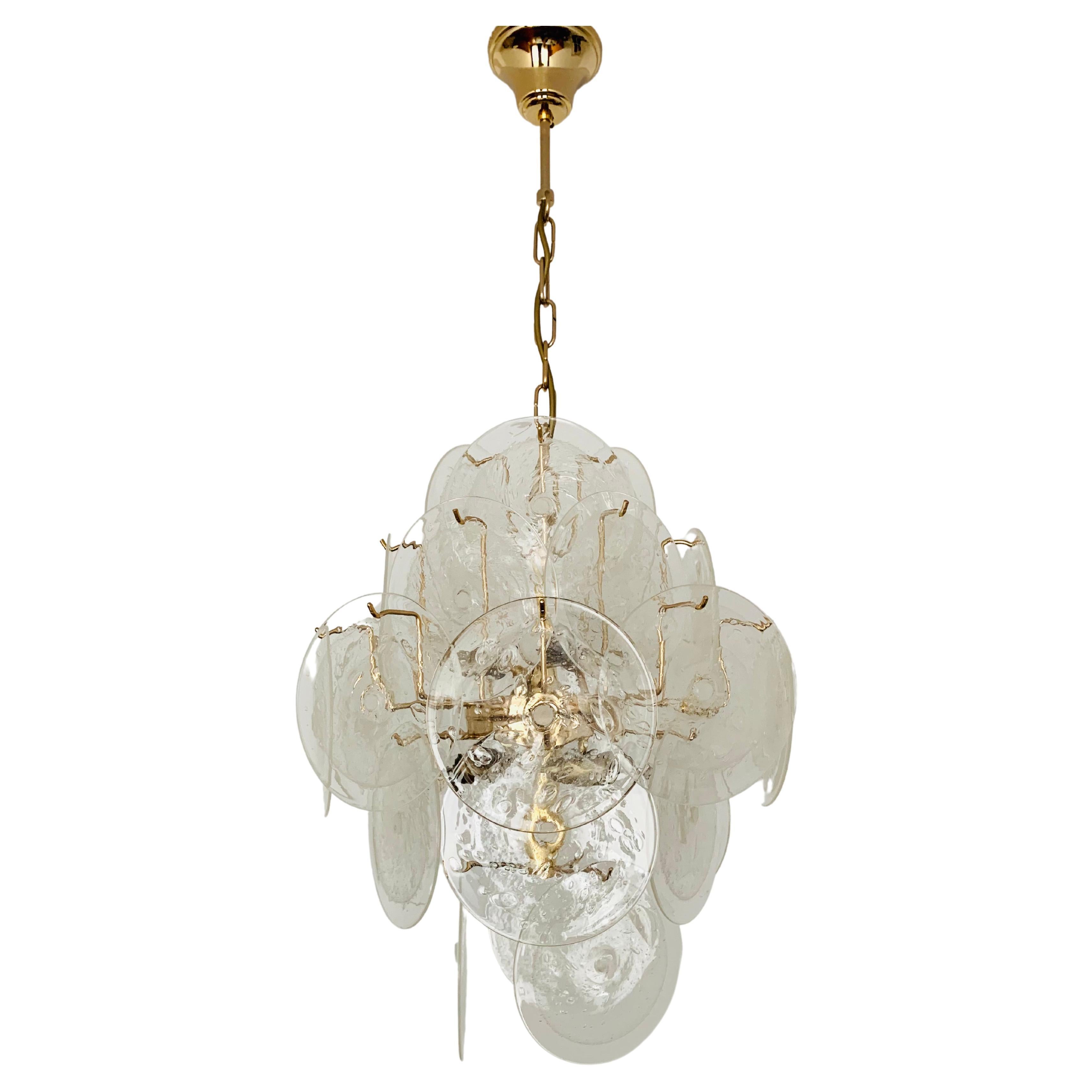 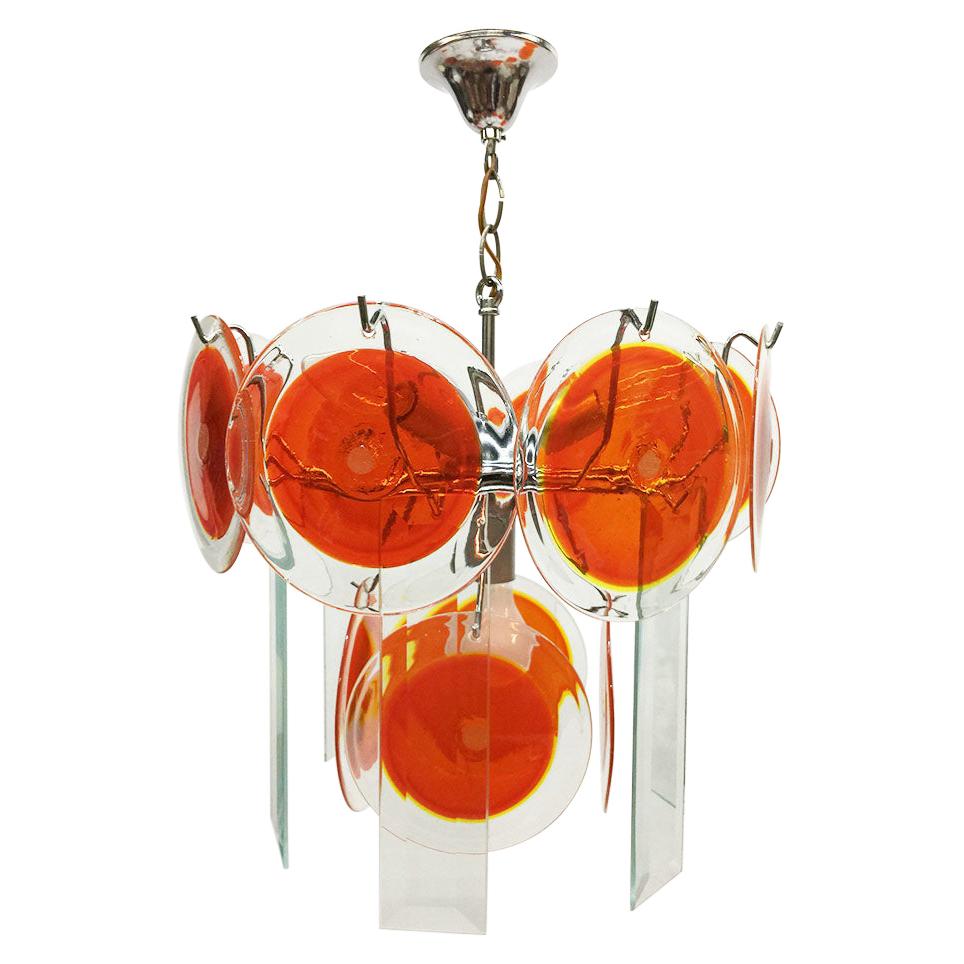 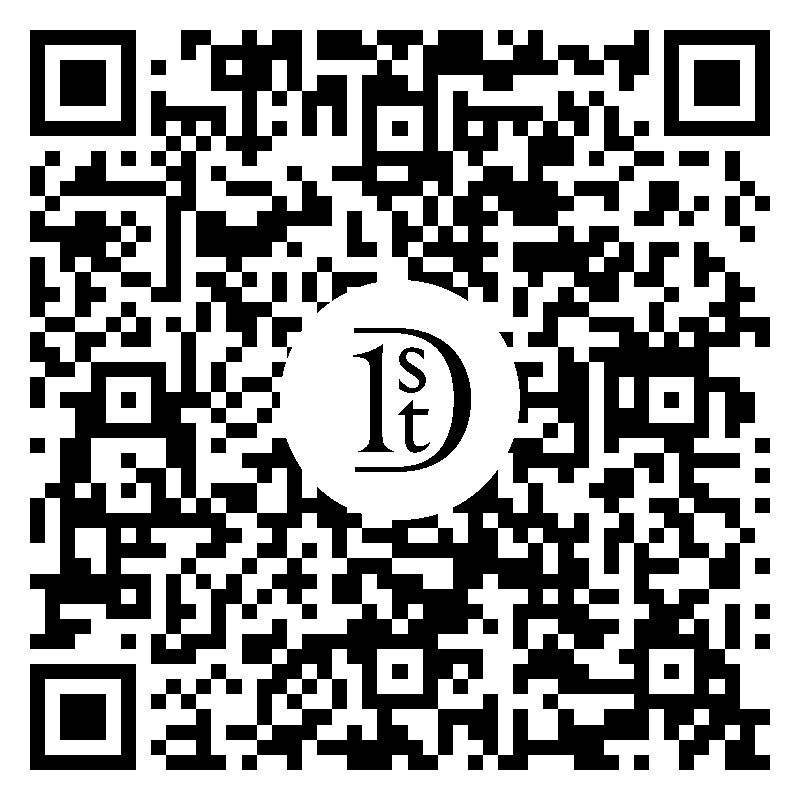 A stunning early 1970s smokey light and dark blue glass disk chandelier made in Murano, Italy. It is designed by well known Italian designer Gino Vistosi for his lighting company Vistosi. The chandelier features hand formed oval disks in a smokey light and dark blue color glass. The larger disks measure approximately 4" by 6" in size. They hang singly or in chains of two from small iron hooks that fit into the large round iron frame. Additionally, the bottom has a matching blue glass dish that is frosted on the interior to diffuse the light. There are are three standard internal sockets. The chandelier measures 23 inches in diameter and 16 inches tall. Very good condition with light wear. This design is called Torcello (one of the first islands to be inhabited by people and the mythic birthplace of Venice). It was produced from 1960s into the 1970s in sconces and various versions of chandeliers. A large chandelier version was published in Domas Magazine, no. 440 in July 1966 on page 105 and in the book I vetri di Murano, Milano, Bastetti, 1967. pp205 and 228 by Giovanni Mariacher. 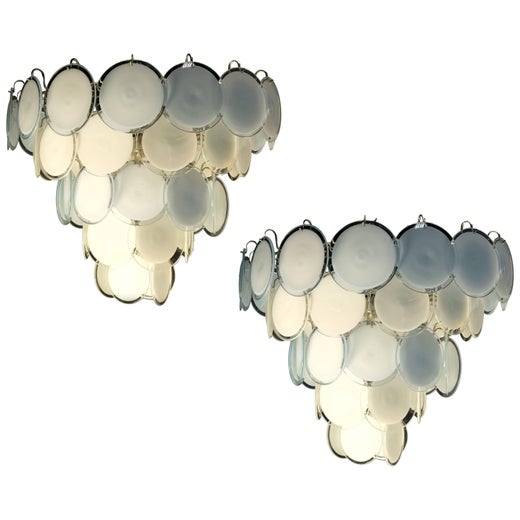 Demonstrative of a unique marriage between artistry and technical excellence, Vistosi lighting fixtures were born from a rich Italian glassmaking tradition. The prolific glass manufacturer came to prominence after World War II for its modernist lighting designs, and today Vistosi is known for opulent chandeliers, lamps and sconces.

The history of Vistosi reaches as far back as 1640, when the Gazzabin family of Murano opened a furnace for producing Murano glass art. "Vistoso," which was originally a nickname, became part of the family's surname and eventually the name “Vistosi” was used to refer to the family’s glass creations.

Vistosi would be recognized by the glassmakers’ guild in Murano during the late 18th century — with Gio-Batta Vistosi becoming head of the guild — but Napoleon dissolved the Venetian state and closed the region’s glass factories by 1807. The modern iteration of the Vistosi company was founded in Murano in 1945 by Guglielmo Vistosi, a Gazzabin family heir.

During the 1950s, Vistosi's grandchildren, Gino and Luciano Vistosi, began specializing in lighting. In the 1960s and ‘70s, the company worked with renowned Italian furniture designers like Adalberto Dal Lago, Ettore Sottsass and Gae Aulenti. One of Vistosi's most famous collaborations was with Italian architect and designer Angelo Mangiarotti. In 1967, Mangiarotti designed a modular crystal-hook lighting system called Giogali that has enjoyed popularity and acclaim to this day.

In 1989, Vistosi was taken over by businessman Giancarlo Moretti, who had an extensive background in the lighting industry. Moretti's son, Matteo Moretti, reinvigorated the business with a series of new design collaborations in 1993. Some of the most notable partnerships included Chiaramonte and Marin, Mauro Olivieri and Michele De Lucchi.

Vistosi has participated in every Euroluce showcase since the lighting exhibition began in 1976. In 2005, the company won the ADI Design Index award for Mangiarotti's Giogali system. In 2007, Vistosi won the Eurispes award and participated in a Compasso d'Oro competition.

Today, Vistosi is still a leader in the lighting industry, shifting to LED and creating new types of lead-free crystal glass for its stunning range of lighting fixtures.

Find a collection of vintage Vistosi lighting and decorative objects on 1stDibs.

1stDibs Buyer Protection Guaranteed
If your item arrives not as described, we’ll work with you and the seller to make it right. Learn More
About the Seller
4.9
Located in New York, NY
Vetted Seller
These experienced sellers undergo a comprehensive evaluation by our team of in-house experts.
Established in 2010
1stDibs seller since 2014
125 sales on 1stDibs
Typical response time: 1 hour
More From This SellerView All
You May Also Like