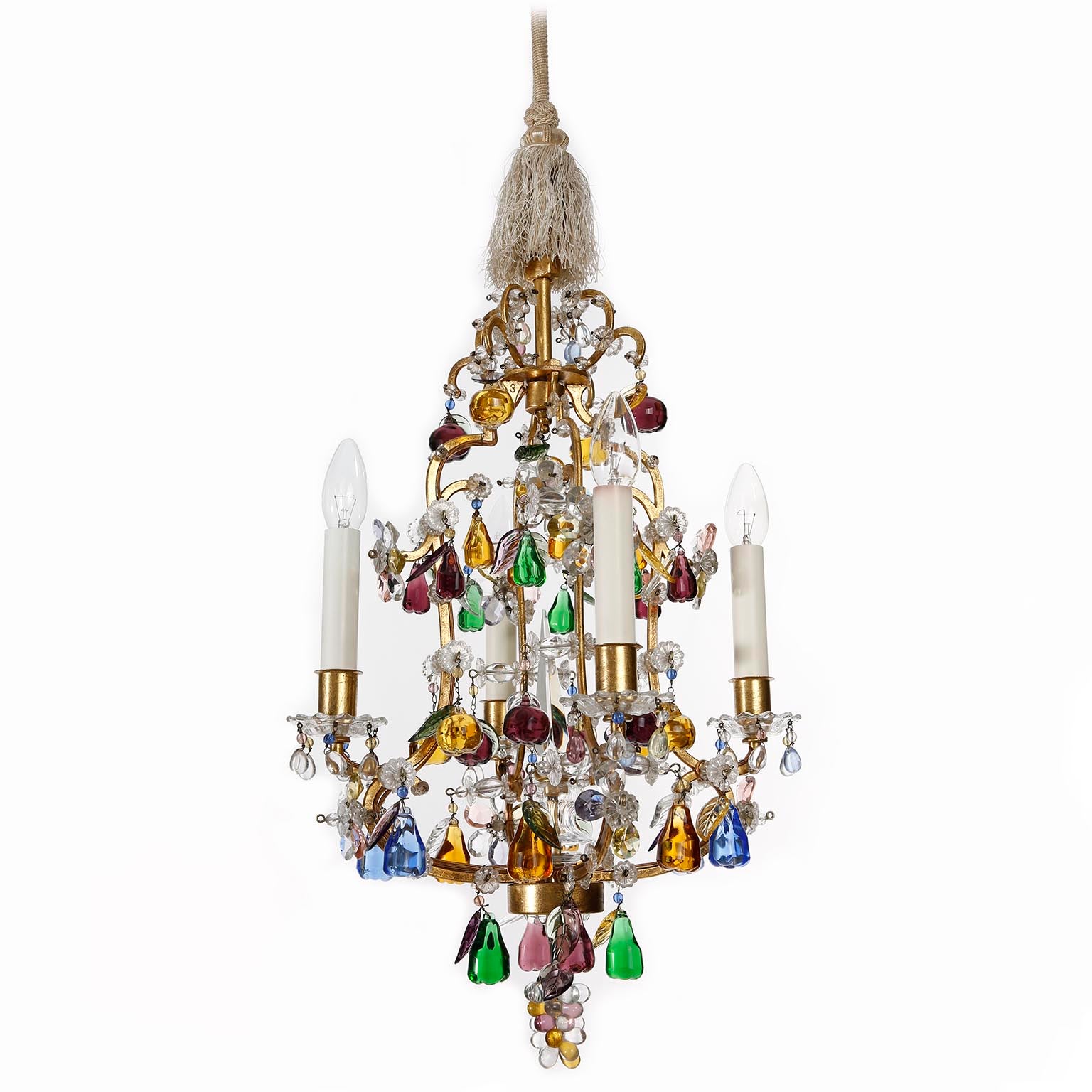 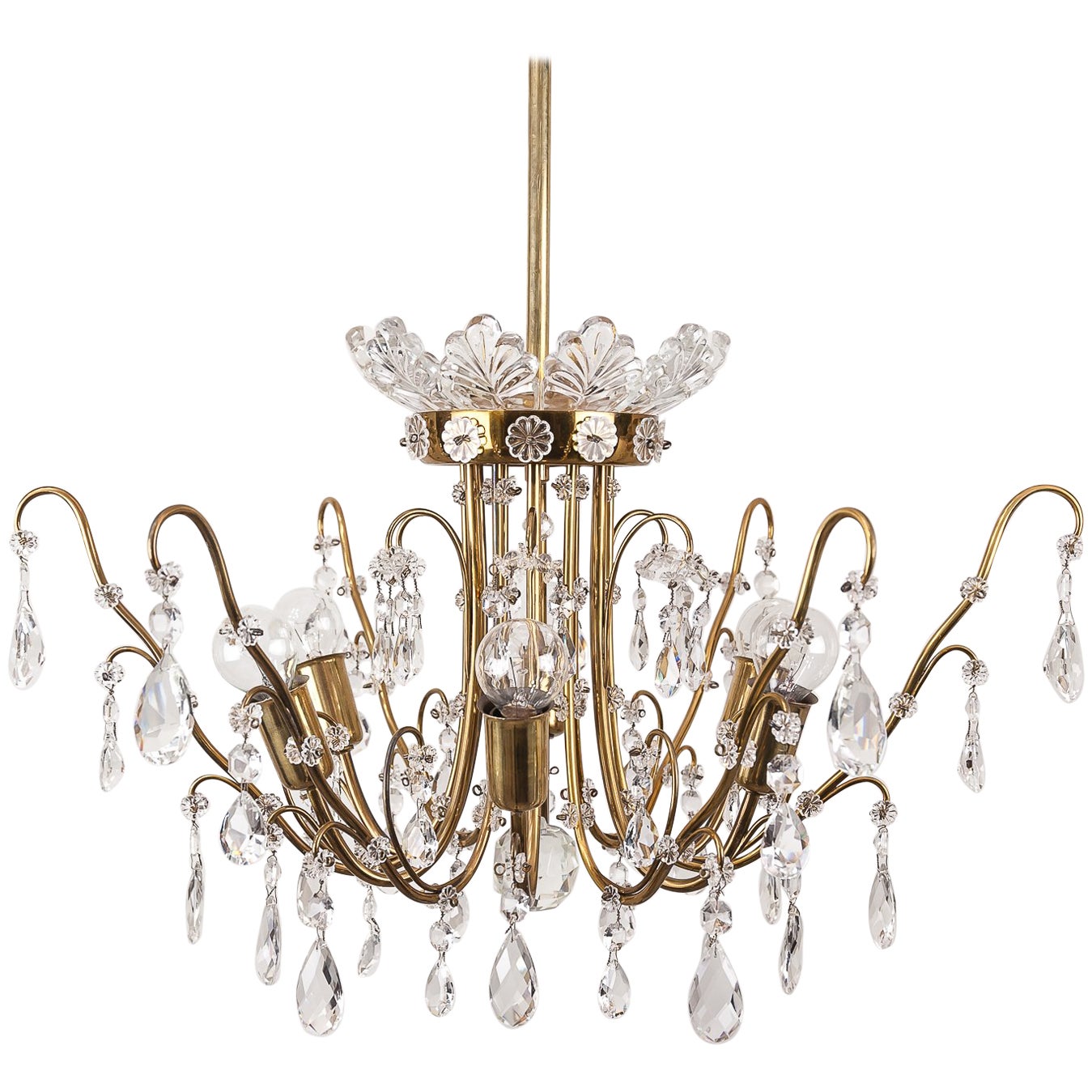 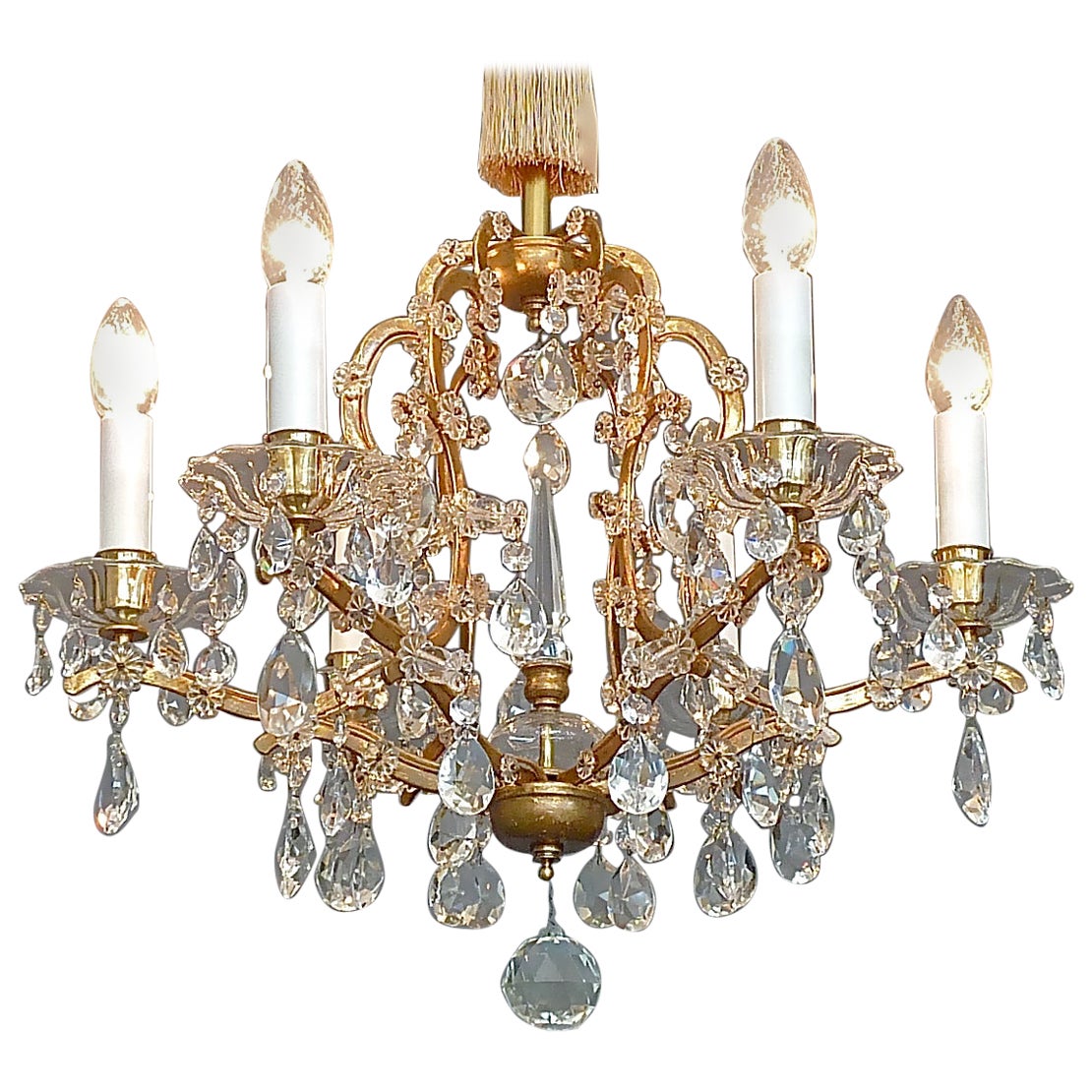 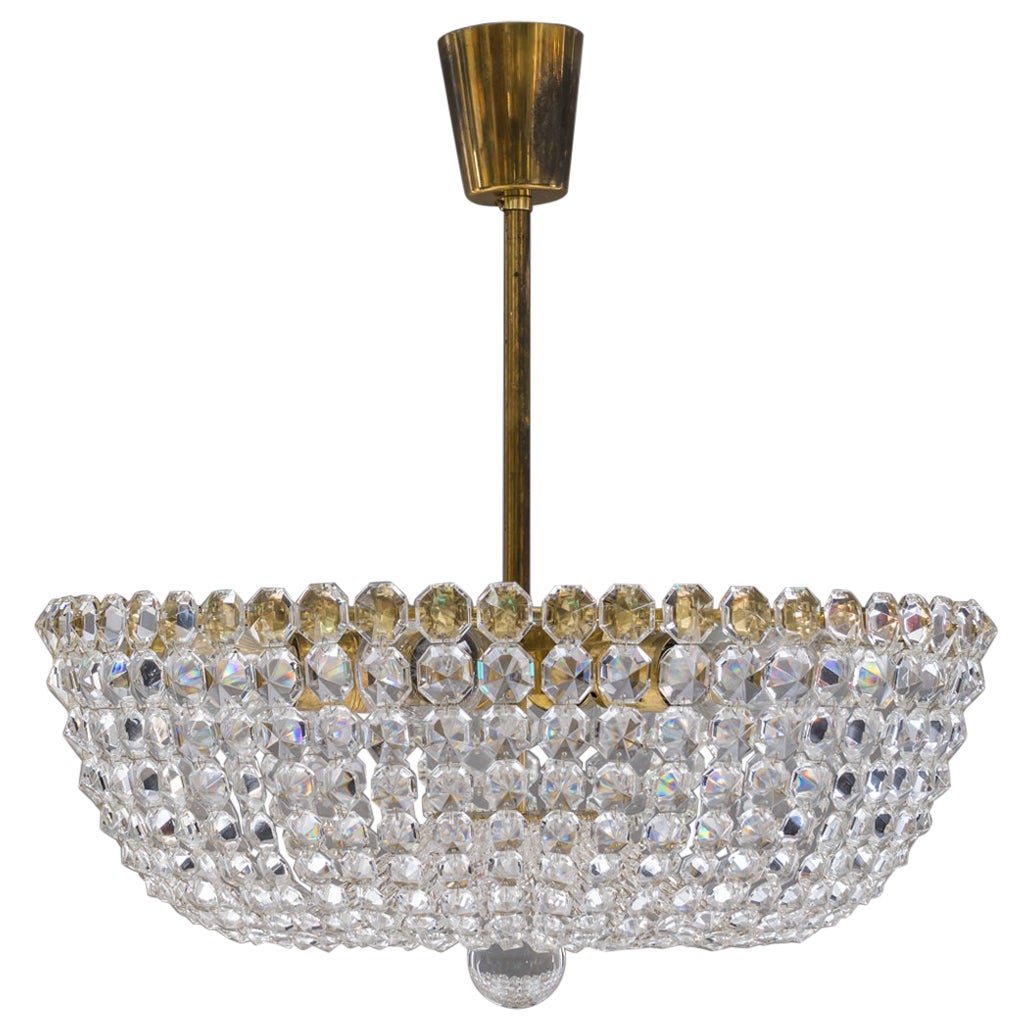 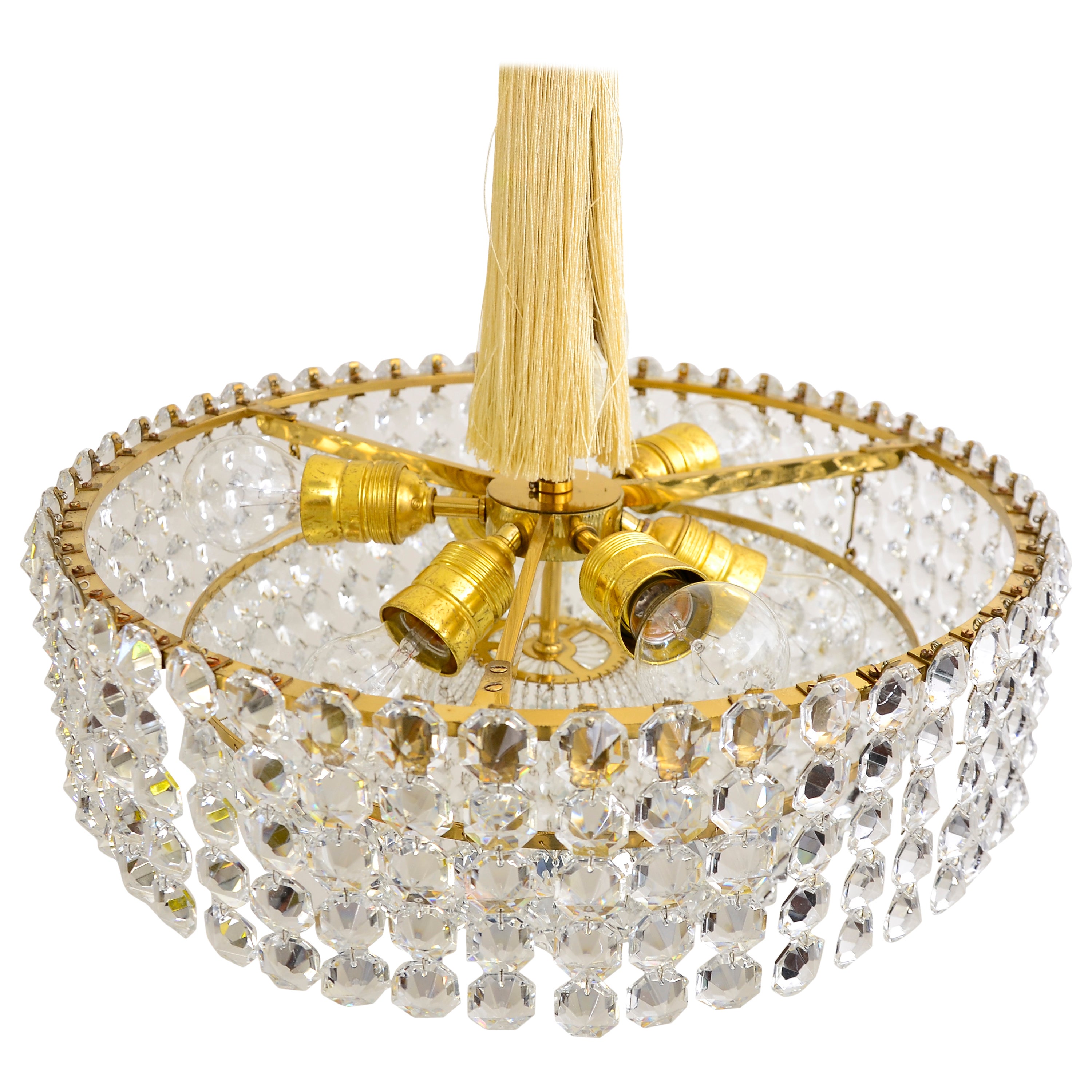 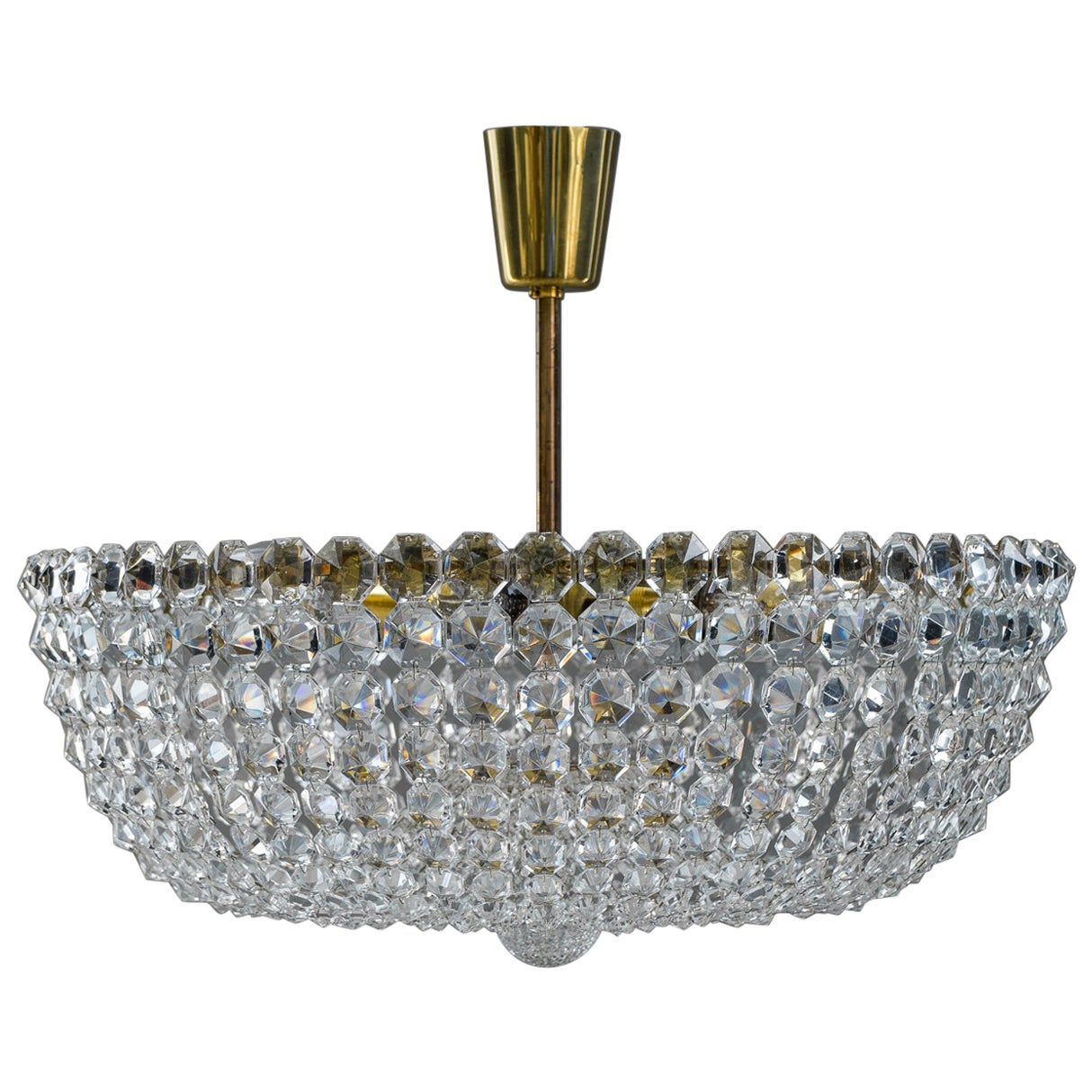 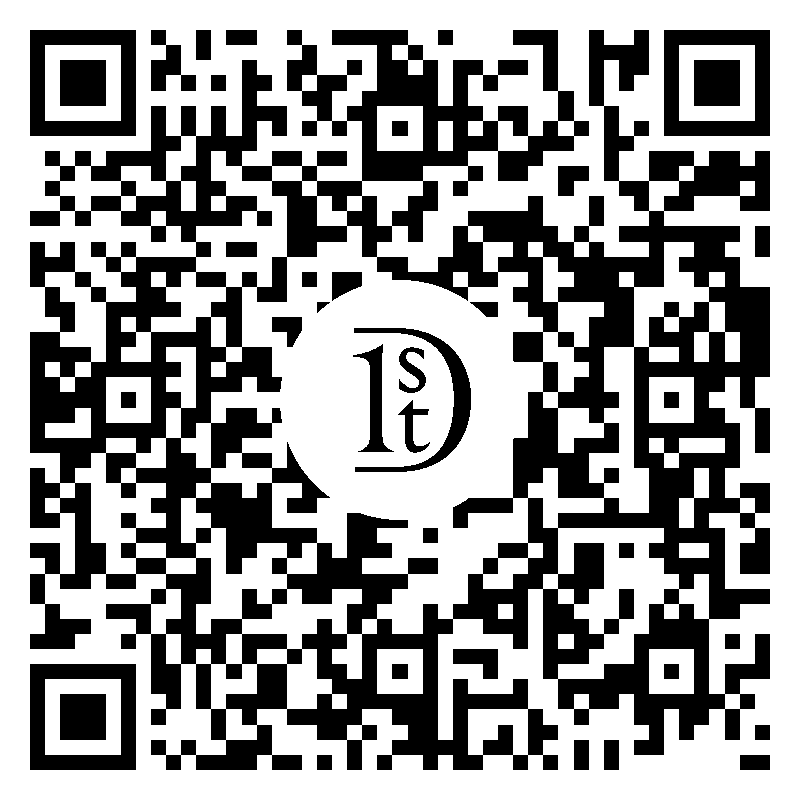 A chandelier from the 'fruit'-series by J. & L. Lobmeyr, Austria, Vienna, manufactured in midcentury, circa 1950. It is made of leaf gold plated metal frame decorated with colorful glass fruits and clear cut glass. The fruits are apples, pears and grapes in the colors red, yellow, green, blue, orange and purple. Currently the light is hanging on a handmade passament which can be replaced with a gilt chain if required. The height of the light itself is 23.6 inch (60 cm) and with passament it is 40 inch (100 cm). It has four sockets for small screw base candelabra E14 bulbs. The light is in very good and refurbished condition. Biedermeier saw the emergence of colorful crystal pieces such as fruits as decorations on chandeliers. Especially classical Baroque shapes presented themselves as perfect medium for this custom. In the late 1950s this trend was reinvented by Lobmeyr with aid of prominent designers. The elegant form of the gilded cage is softened by the playful character of the fruits. This precious item brings splendour into the tiniest room.

The venerable Austrian firm J. & L. Lobmeyr is one of the world’s premier glassware makers and purveyors, noted especially for its lighting and tableware designs. Headquartered in Vienna, Lobmeyr has won numerous illustrious commissions in its nearly two centuries in business, including the chandeliers for the Hapsburg monarchy’s Schönbrunn Palace, the Lincoln Center home of the Metropolitan Opera in New York, and the Kennedy Center in Washington, D.C.


Lobmeyr is still family owned and managed. The company was founded by glass trader Josef Lobmeyr in 1823. It thrived during the long tenure of his son Ludwig, who built a network of manufacturers and artisanal workshops in Bohemia—central Europe’s revered glass-making region, now part of the Czech Republic—and earned imperial patronage. (He also collaborated with Thomas Edison to create the first electric chandelier, in 1883.) His nephew, Stefan Rath, who took over as head of Lobmeyr in 1917, introduced modernist design to the company repertoire, contracting with designers such as Josef Hoffmann, Adolf Loos, Otto Prutscher and Michael Powolny to create tableware.


Lobmeyr has never been married to a dominant in-house design type. The firm has produced chandeliers and sconces in styles as various as neo-Baroque, Rococo, neoclassical (or Louis XVI), Art Nouveau, minimalist and “sputnik” mid-century modern. As you will see from the offerings available on these pages, Lobmeyr can bring a sense of grandeur suitable to any décor.

Always on the lookout for beautiful, rare and high-quality 20th-century design, this dealer offers furnishings made in the 1950s to 1970s in Austria, Italy, Germany and Scandinavian, as well as selected Jugendstil, Art Nouveau and Art Deco pieces from the 1900s and Bauhaus items from the 1930s. Its inventory is predominately lighting,...

Diamond Seller
These expertly vetted sellers are 1stDibs' most experienced sellers and are rated highest by our customers.
1stDibs seller since 2014
700 sales on 1stDibs
Typical response time: <1 hour
More From This Seller
View All From Seller

$1,692 Sale Price / item
22% Off
Oswald Haerdtl & Lobmeyr Crystal and Gilt Brass Chandelier, Austria, circa 1950s
By Oswald Haerdtl, J.L Lobmeyr
Located in Wiesbaden, Hessen
A wonderful and very rare model of a mid-century chandelier designed by Oswald Haerdtl for Lobmeyr. This chandelier is made of gilt brass frame with cut crystal elements. The cha...
Category