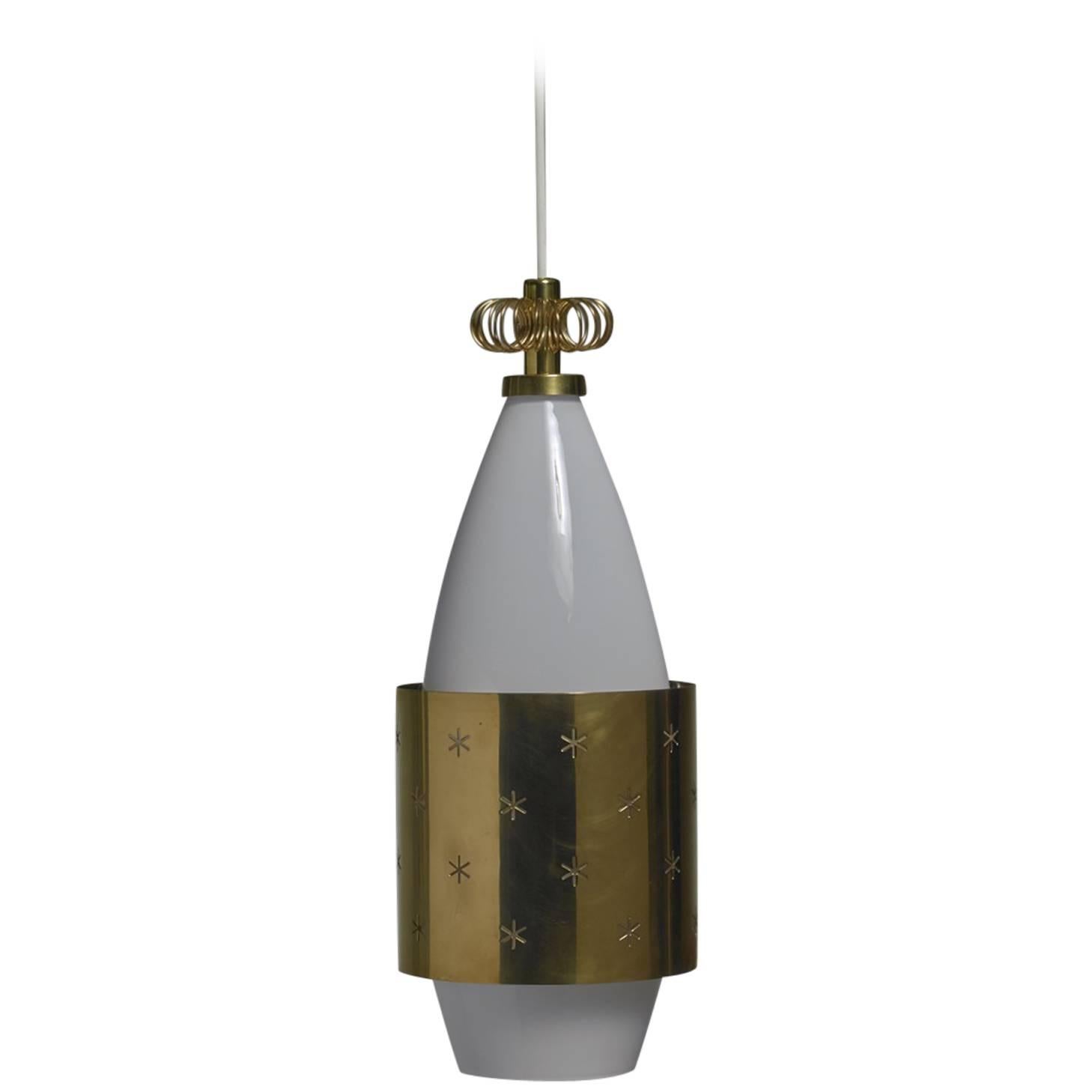 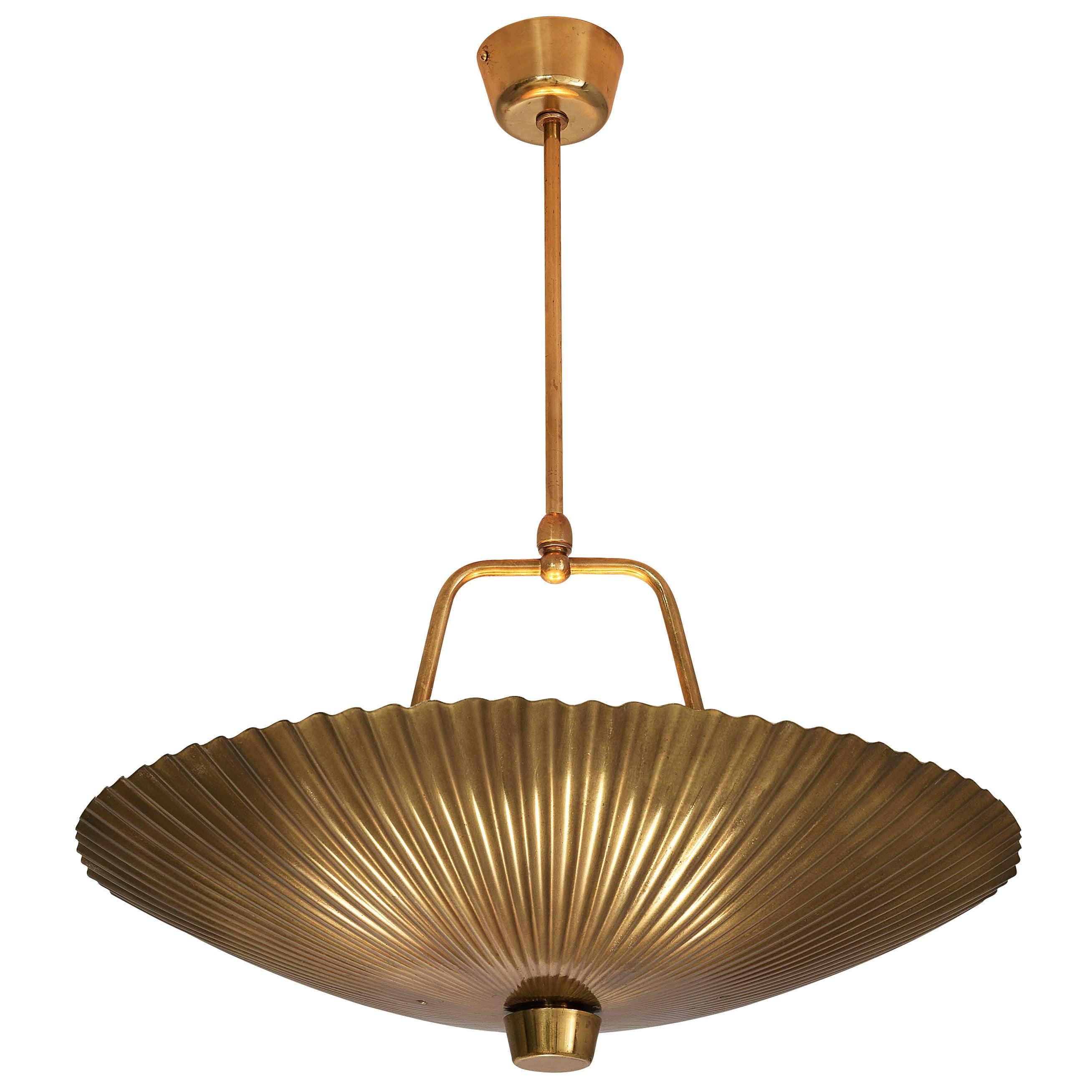 Pair of K-20 Pendants by Paavo Tynell for Idman 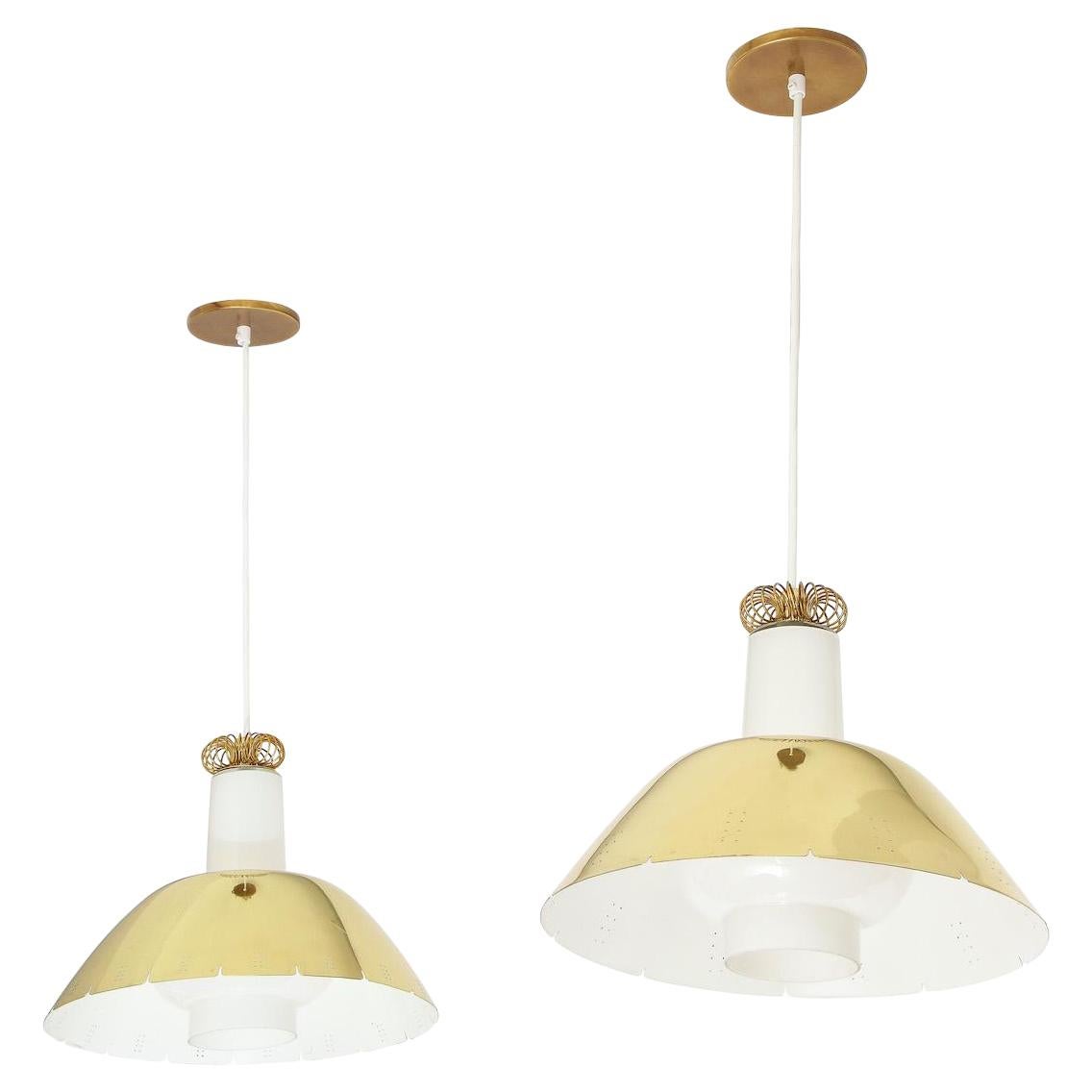 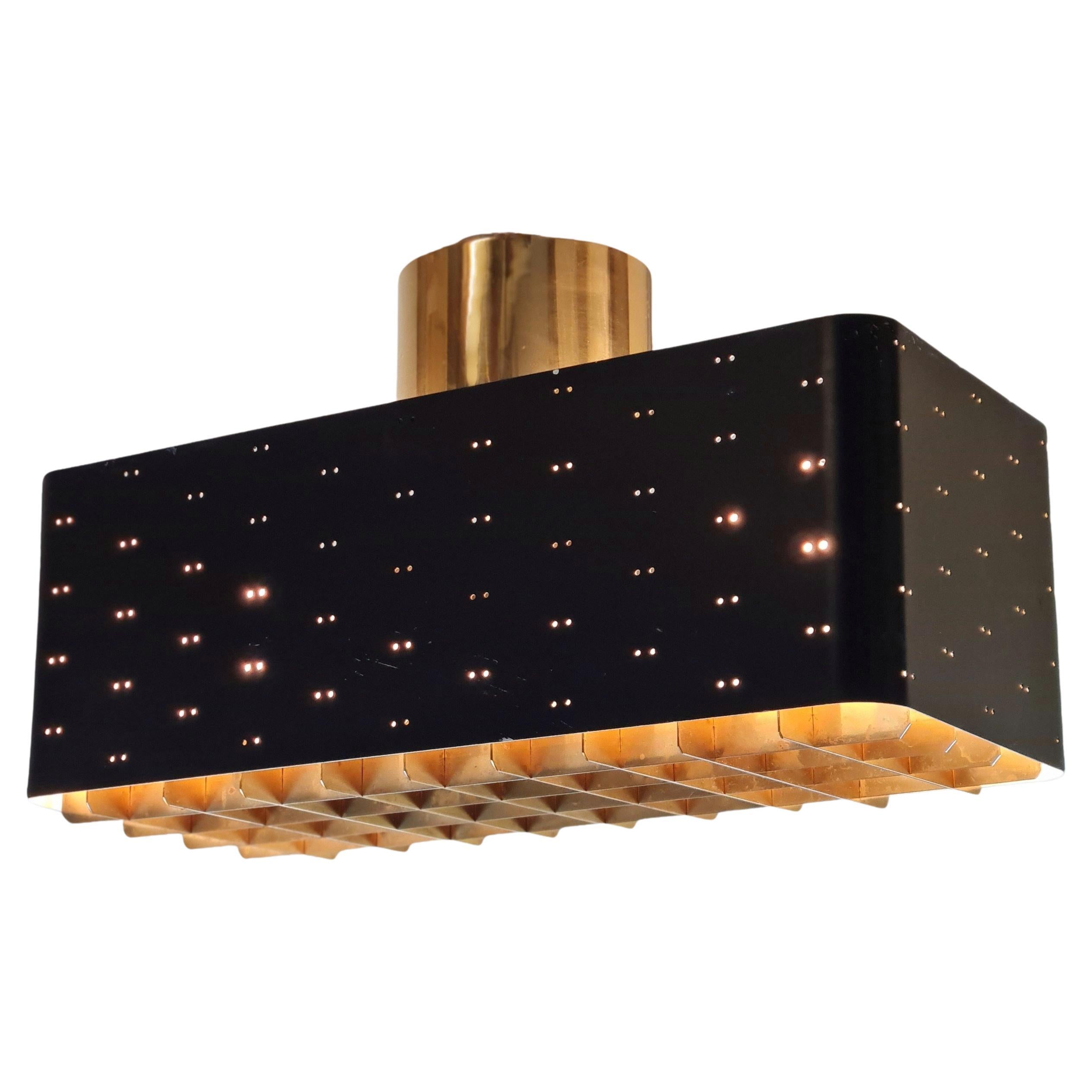 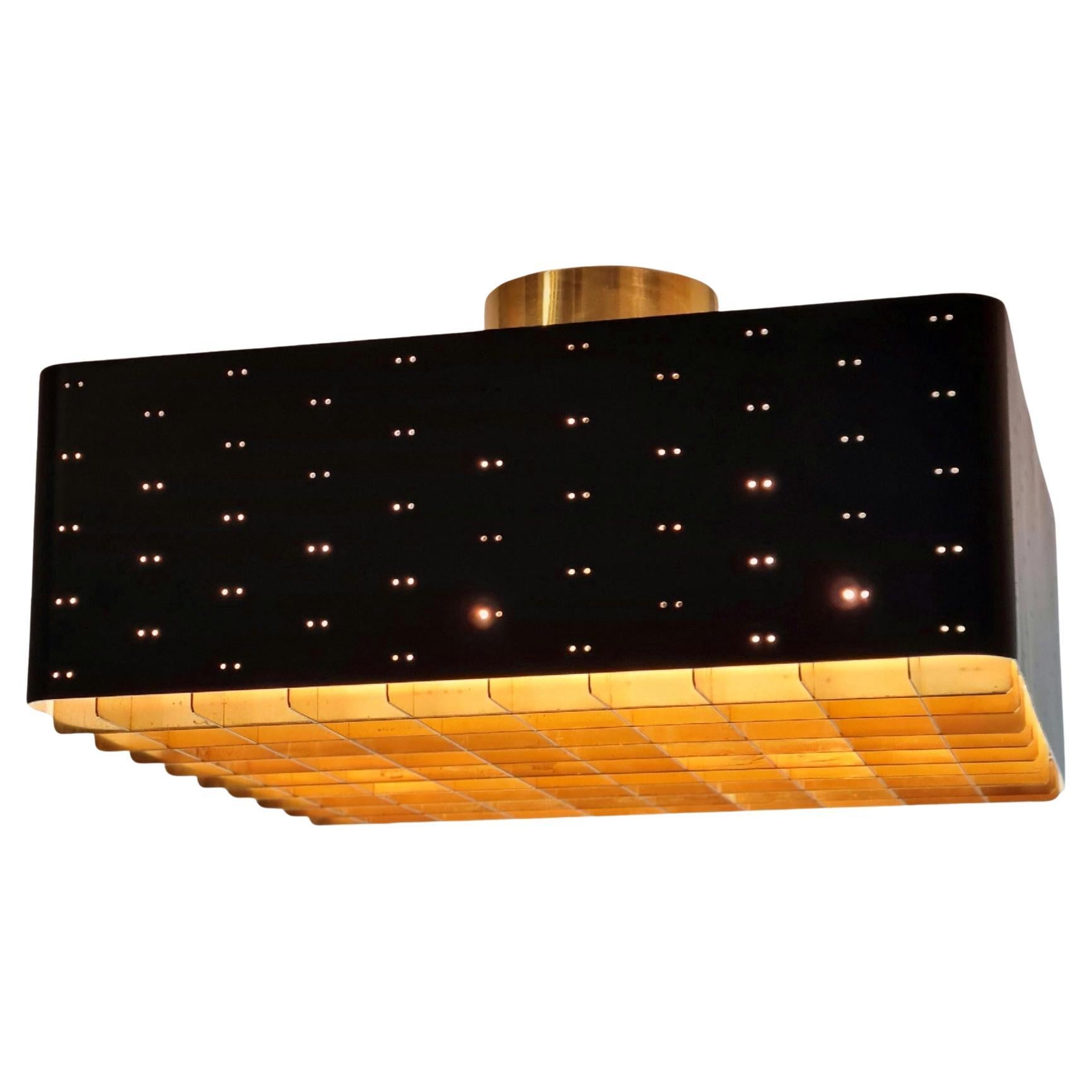 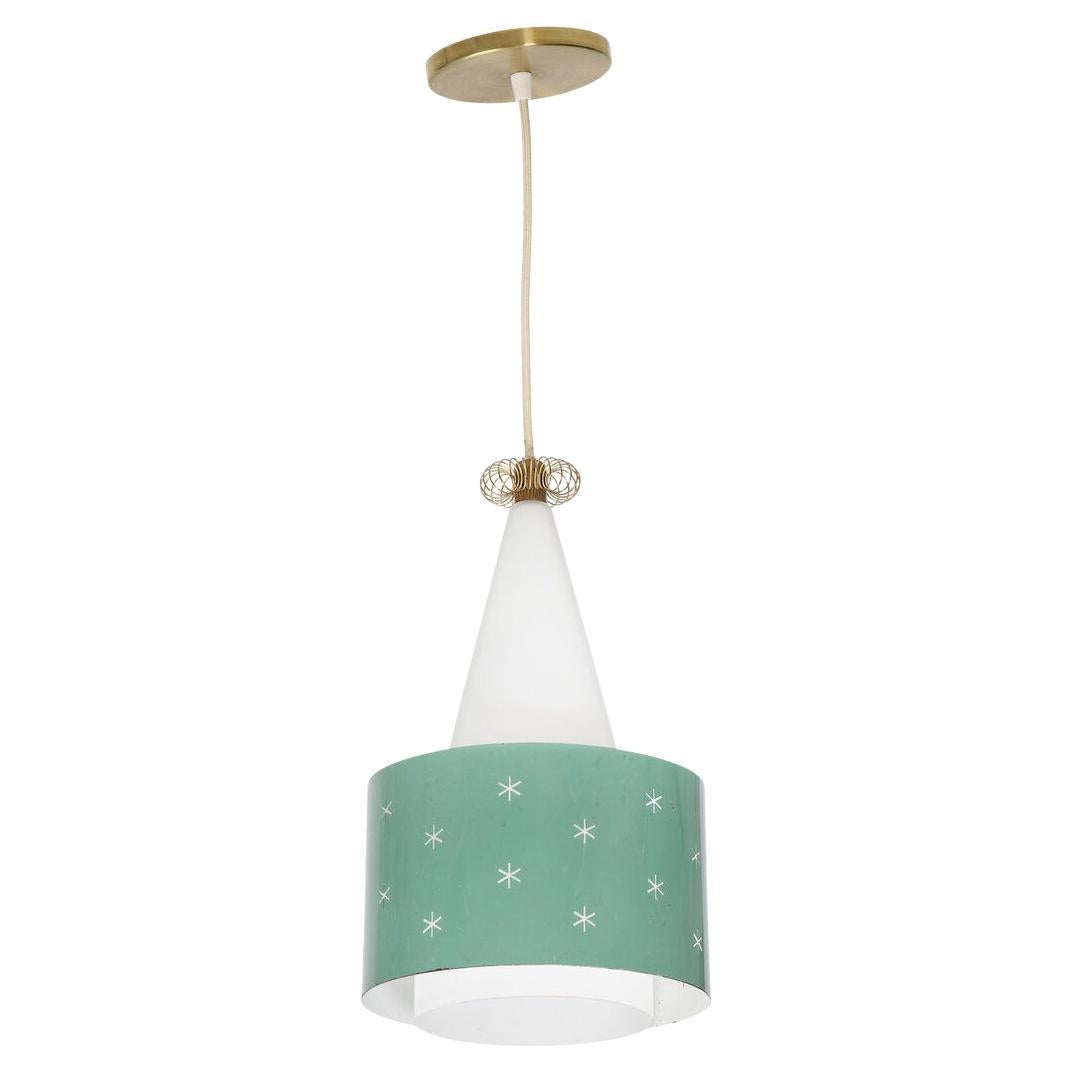 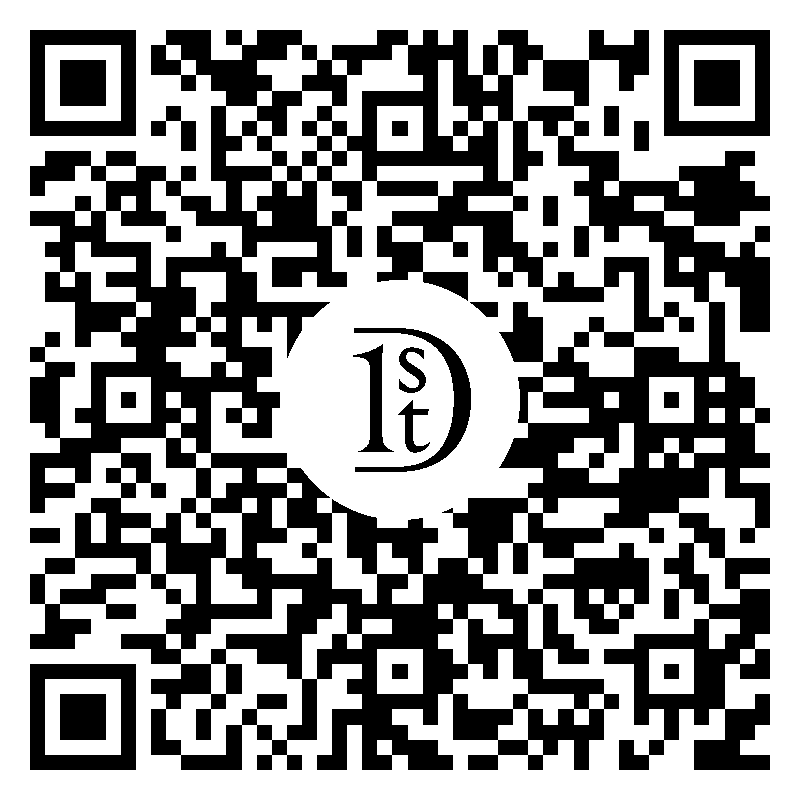 Paavo Tynell for Idman, chandelier, white metal, glass, Finland, 1950s Striking chandeliers by Paavo Tynell, originating from the central railway station in Helsinki. The two lamps consist of nine lightbulbs in a geometric shape. Round opaline glass bulbs are finished with a white metal ring on the bottom and top. Furthermore, a metal plate on top of the bulb characterizes the design. All nine shades are arranged in a rectangle and fixed to the ceiling with four cylindric mounts. These atmospheric lamps are special within Tynell’s oeuvre who usually preferred brass as the main material for this lightning designs and also is well known for his delicate, organic shapes. In this case, Tynell reacted to the public office surrounding the lamps were designed for. The chandeliers have an interesting provenance. These two chandeliers originate from the Central Railway Station in Helsinki, one of Finland’s most well-known buildings. The railway station was designed in 1904 by Finnish architect Eliel Saarinen (1873-1950), the father of Eero Saarinen. The station opened its doors in 1919 and is used as the main railway station in Helsinki until today. The monumental, expressive building nowadays is the focal point of the capital city and one of Helsinki’s landmarks. Paavo Tynell not only designed the large chandeliers for the main hall but also lamps for the rest of the building. Until recently, the present example was hanging in the administrative part of the station. Due to a renovation and transformation into a hotel, these two lamps were taken down. Finnish designer Paavo Tynell began (1890-1973) began his career as a blacksmith. After studying to become a master craftsman at the University of Art and Design in Helsinki, he founded his own manufacturing company named Taito Oy. During his career, he collaborated with fellow Finnish designers and architects such as Alvar Aalto. Their collaboration proved to be very fruitful and achieved Tynell’s reputation of “the man who illuminated Finland.” Tynell’s international design influence grew thanks to the Finland House located in New York and allowed him to see himself trusted with prestigious orders both for public buildings such as the UN but also for important private collections. Based on existing models, the wealthiest families in Finland ordered custom versions.

Recognized Seller
These prestigious sellers are industry leaders and represent the highest echelon for item quality and design.
Diamond Seller
These expertly vetted sellers are 1stDibs' most experienced sellers and are rated highest by our customers.
Established in 2006
1stDibs seller since 2012
4,180 sales on 1stDibs
Typical response time: 1 hour
Associations
20th Century Specialists
More From This Seller

Paavo Tynell K2-12 Opaline Glass and Brass Pendant for Idman, Finland, 1950s
By Idman, Paavo Tynell
Located in Maastricht, NL
A rare model K2-12 pendant by Paavo Tynell for Idman. The lamp is made of an opaline glass diffuser and a brass shade and crown. The shade has star-shaped perforations.
Category

Pair of K-20 Pendants by Paavo Tynell for Idman

$15,000 / set
Paavo Tynell "Starry Sky" Ceiling Lamp 9068 for Idman
By Idman, Paavo Tynell
Located in Helsinki, FI
The Starry Sky is one of the most iconic design of Paavo Tynell's lamps. It's was made by both Taito and Idman in three different sizes. The way the light filters through the grill a...
Category

$7,402
Paavo Tynell "Starry Sky" Ceiling Lamp 9068 for Idman
By Idman, Paavo Tynell
Located in Helsinki, FI
The Starry Sky is one of the most iconic design of Paavo Tynell's lamps. It was made by both Taito and Idman in three different sizes. The way the light filters through the grill and...
Category

$8,102
Paavo Tynell Pendant in Opal Glass and Lamellar Wood, Idman, 1950s
By Paavo Tynell, Idman Oy
Located in The Hague, NL
This rare pendant was designed by Paavo Tynell and produced by Idman in Finland. This model K3-43 was produced in the early 1950s and came with a range of shades including fabric sha...
Category