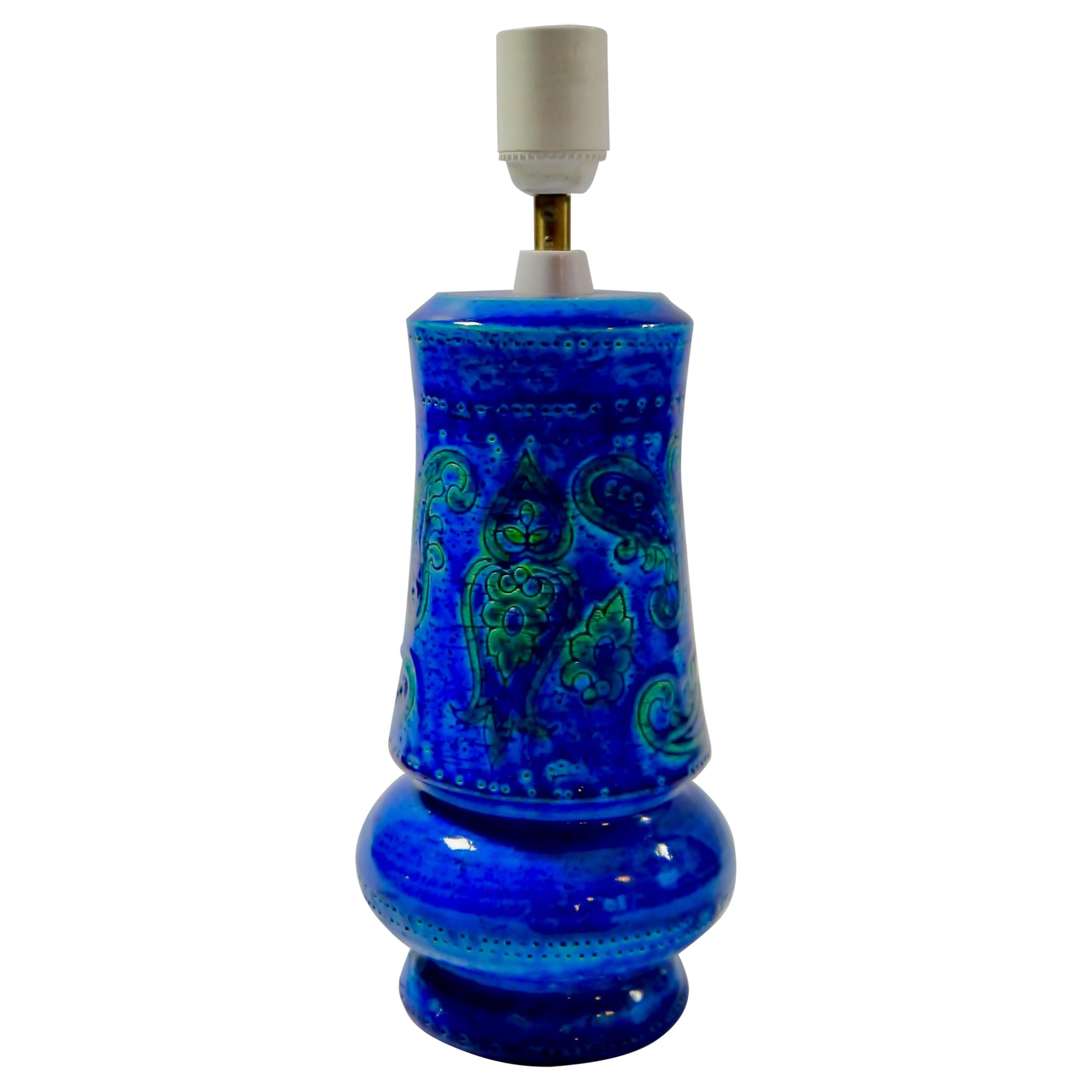 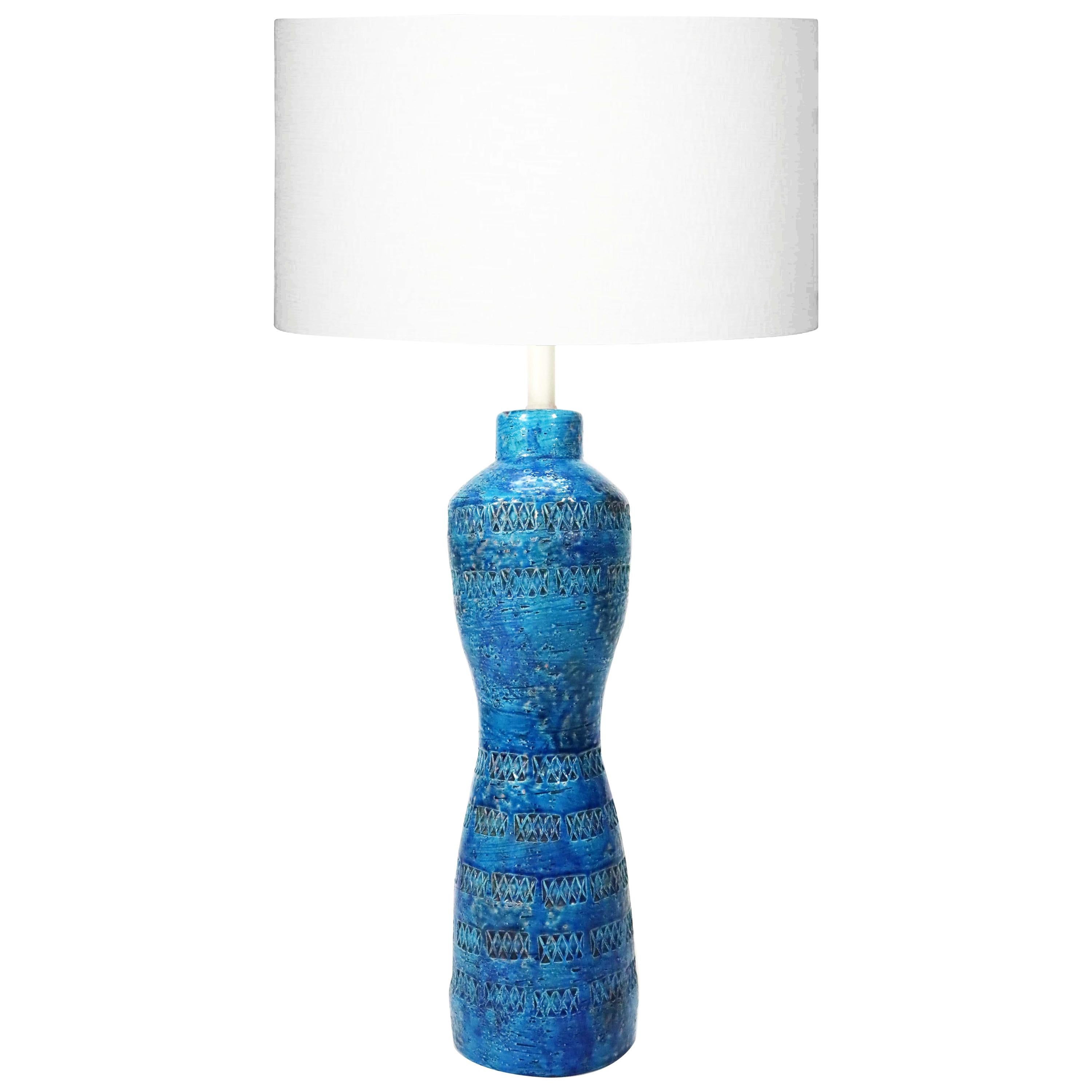 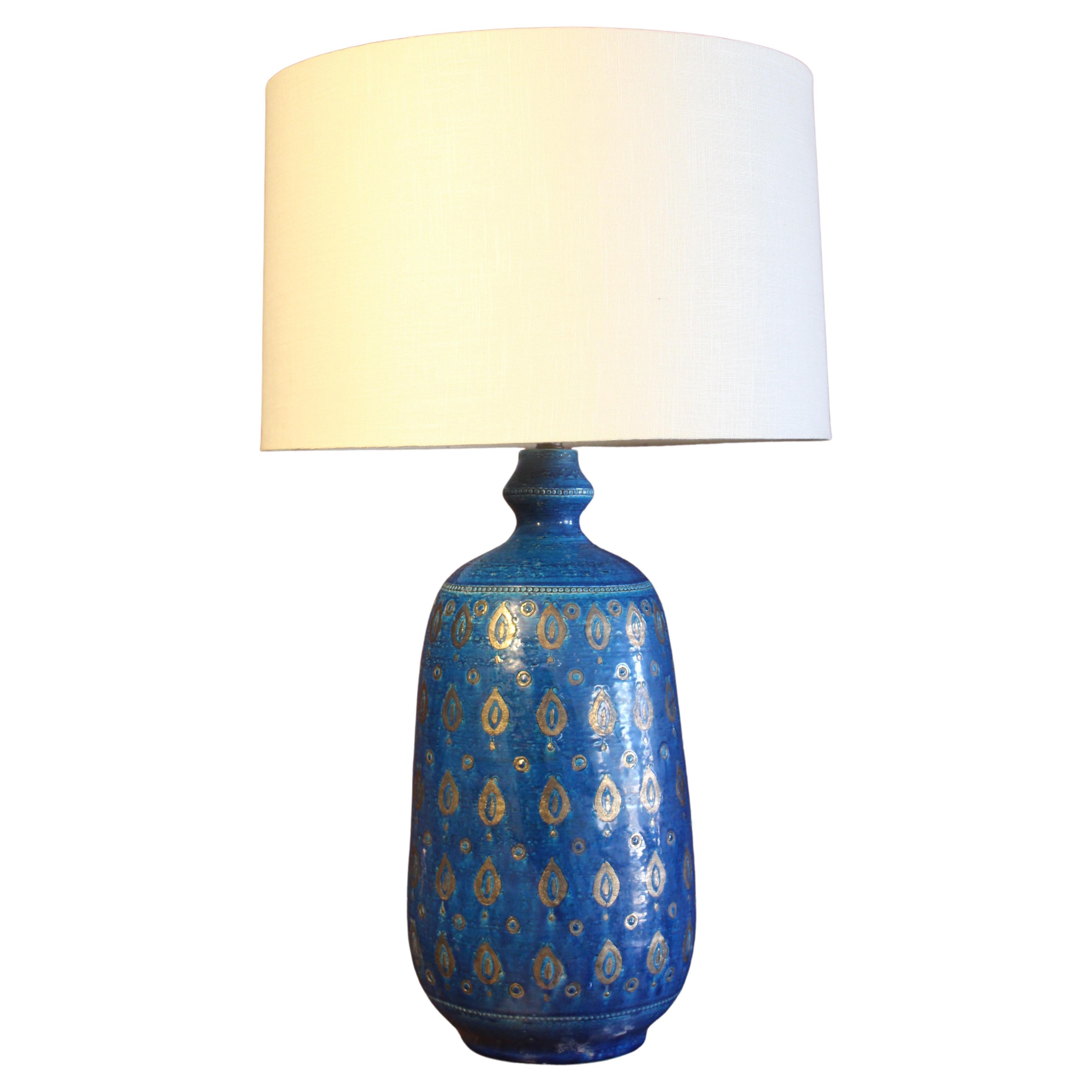 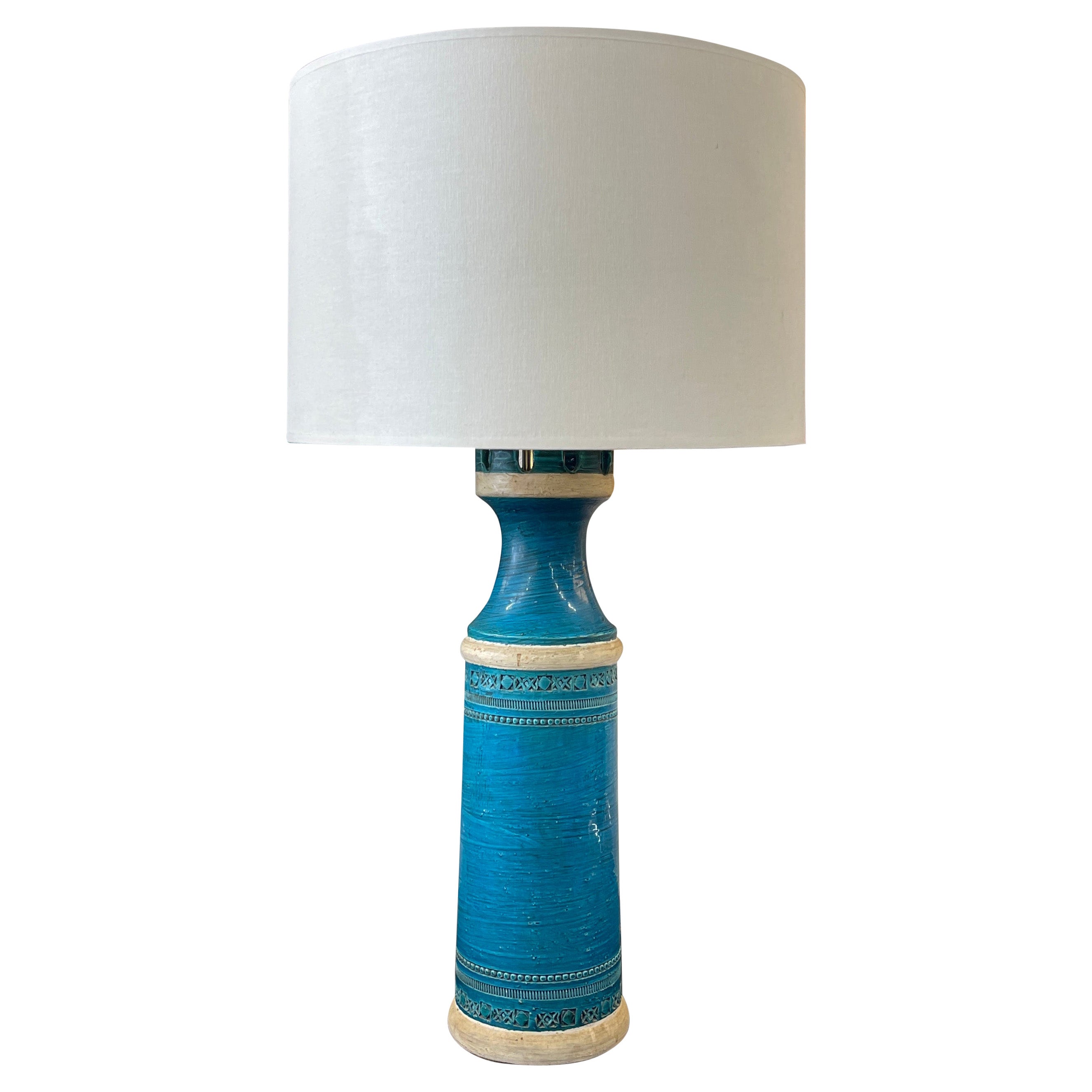 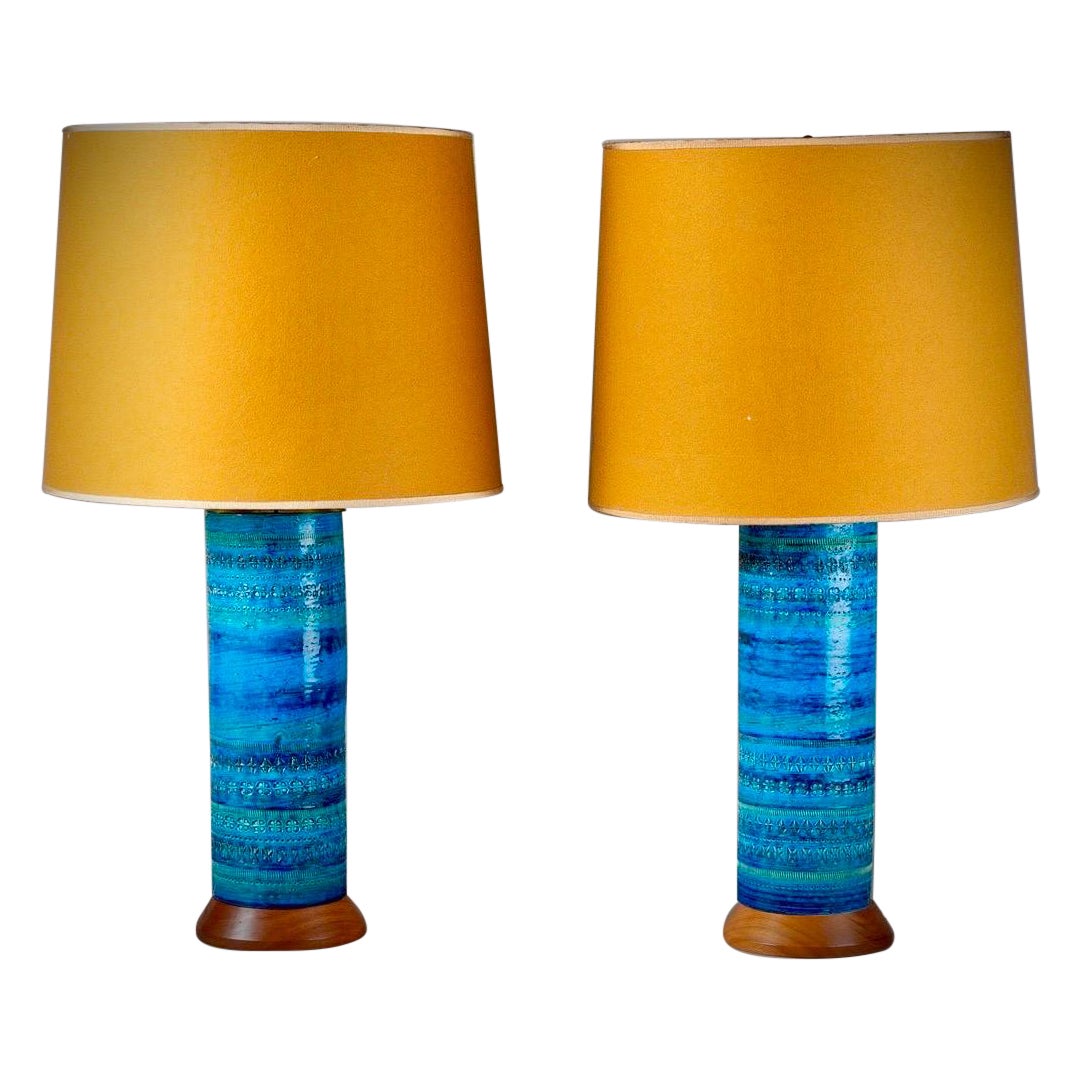 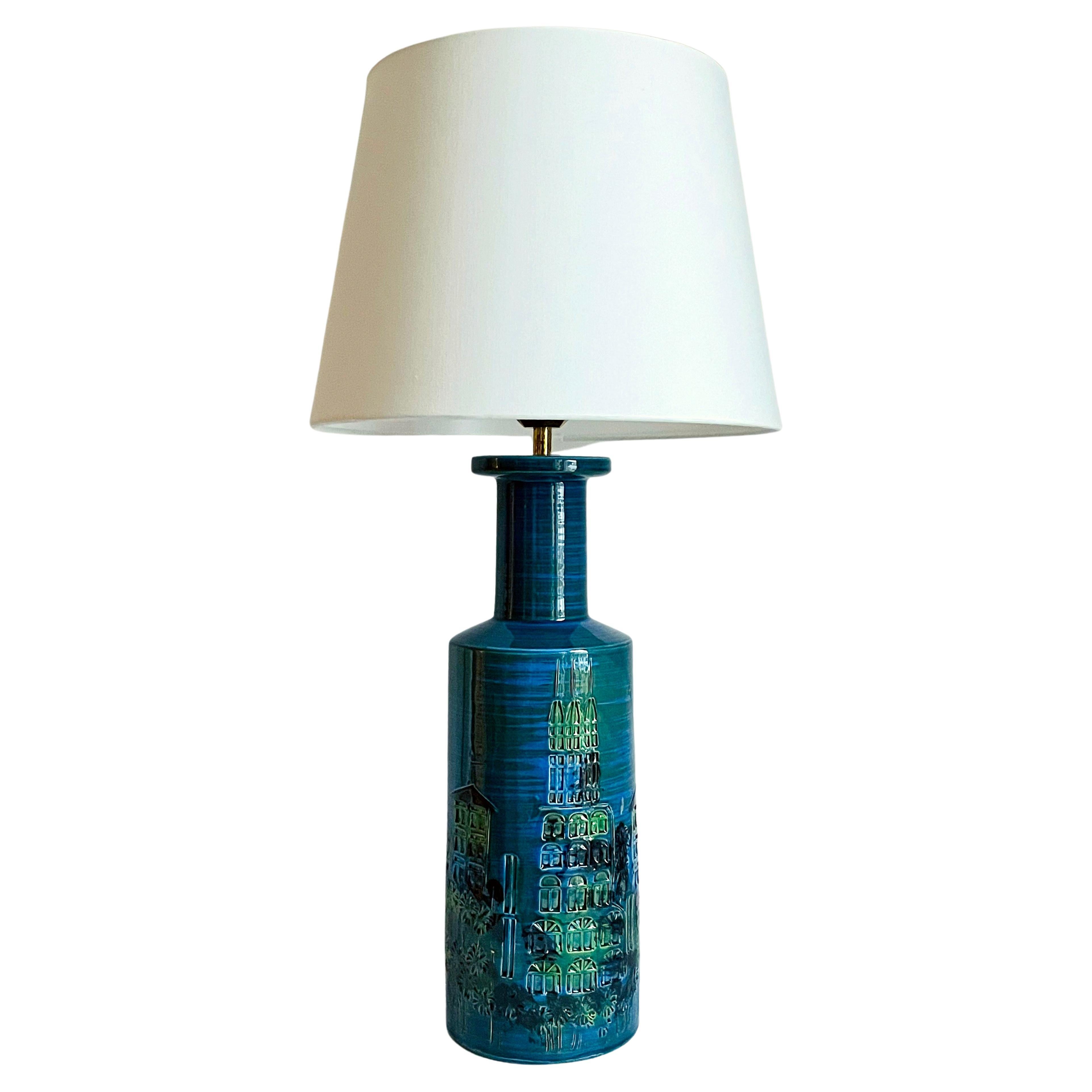 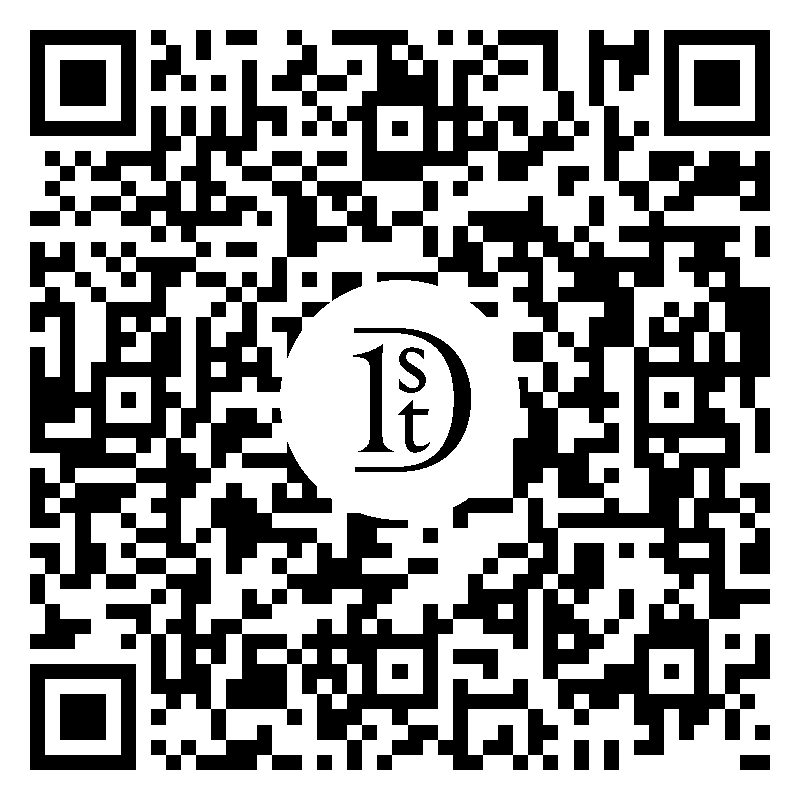 an incredible matched pair of 1950's Italian glazed ceramic lamps made by Aldo Londi for Bitossi. These rare hourglass shaped lamps are glazed in brilliant Rimini Blue, and incised with Londi's classic repeated diamond patterns. they are in excellent condition, and include new linen shades. 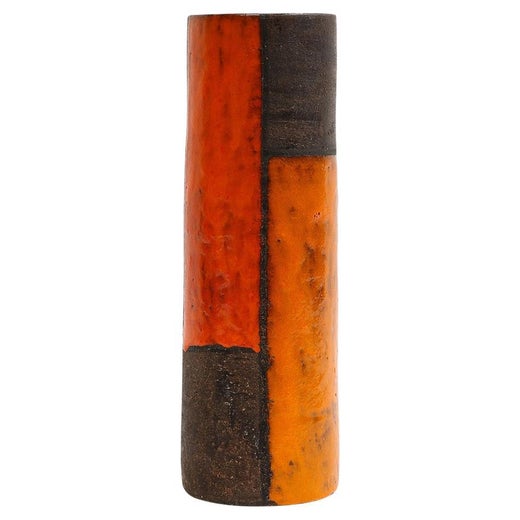 Like a Fellini movie, the ceramics of this famed Italian company embody a creative spectrum that ranges from the playful and earthy to the high-minded and provocative. Based in Florence, Bitossi Ceramiche draws on craft traditions that date back to the 1500s. These find expression in the artisanal vintage vases and animal figures by the firm’s longtime art director Aldo Londi, as well as the colorful, totemic vessels designed by the high priest of postmodernism, Ettore Sottsass.

The company was incorporated by Guido Bitossi in 1921, though the family began making art pottery in the mid-19th century. In the 1930s, Londi came aboard, bringing with him a mindset that respected time-honored craft, yet looked also to the future. On the one hand, Londi’s perspective fostered the making of Bitossi’s popular whimsical animal figures, hand-shaped and -carved and finished in a rich azure glaze known as “Rimini Blue.”

But with his other hand, Londi reached out to thoughtful, experimental designers such as Sottsass. Starting in the 1950s, some 20 years before he founded the Memphis postmodern design collective in Milan, Sottsass used the Bitossi kilns to create timeless works that manifest both primitive forms and modern geometries. In later decades, Bitossi would welcome new generations of designers, which have included such names as Ginevra Bocini and Karim Rashid. While always looking forward, Bitossi is firm in their belief that mastery of craft is the first step towards beautiful design. As you will see from the works offered on these pages, that is a winning philosophy.

Find a collection of vintage Bitossi decorative objects, lighting and serveware on 1stDibs.

Master Italian ceramist Aldo Londi created a range of decorative objects in the latter half of the 20th century for the manufacturer Bitossi. In addition to the small-scale animal sculptures for which he is best known, Londi designed a variety of ceramics for the famed company that includes vases, bowls and desk accessories. Collectors know that vintage Aldo Londi pottery is marked by deep attention to detail and an integration of rich, alluring hues typically associated with the Mediterranean.

Londi was born in Montelupo Fiorentino, just outside of Florence, an area that has been known for its pottery since the Renaissance. Londi showed an early interest in the craft, apprenticing at the Fratelli Fanciullacci ceramic workshop when he was only 11 years old. He worked at the company until he left to fight in World War II. After returning to Montelupo Fiorentino in 1946, Londi became the creative director at Bitossi — a position he held for more than 50 years.

Londi's fresh and unique style breathed new life into Bitossi. He prioritized the production of high-quality and handmade decorative objects and created many of Bitossi's pottery lines himself. The most famous of Londi's Bitossi collections is the Rimini Blu line of animals and vases, which debuted in 1955. The collection is characterized by geometric and whimsical patterns and is recognizable for its marvelous blue color.

Londi's fame and popularity extended outside of Italy with the help of Raymor. The American import and distribution company introduced many esteemed Italian manufacturers such as Bitossi to boutiques and department stores in the United States. After Raymor founder Irving Richards hired Ettore Sottsass to design ceramics, Richards connected his new recruit to Londi. Decades before he founded a legendary postmodern design collective in Milan called the Memphis Group, Sottsass used the Bitossi kilns to create timeless works that manifest both primitive forms and modern geometries.

In 2021, Bitossi opened the Bitossi Archive Museum at its Montelupo Fiorentino headquarters. Many of the works designed by the company's most esteemed contributor and artistic director, Aldo Londi, are proudly displayed.

1stDibs Buyer Protection Guaranteed
If your item arrives not as described, we’ll work with you and the seller to make it right. Learn More
About the Seller
5.0
Located in Hudson, NY
Vetted Seller
These experienced sellers undergo a comprehensive evaluation by our team of in-house experts.
Established in 1996
1stDibs seller since 2009
269 sales on 1stDibs
Typical response time: <1 hour
More From This SellerView All
People Also Browsed
You May Also Like