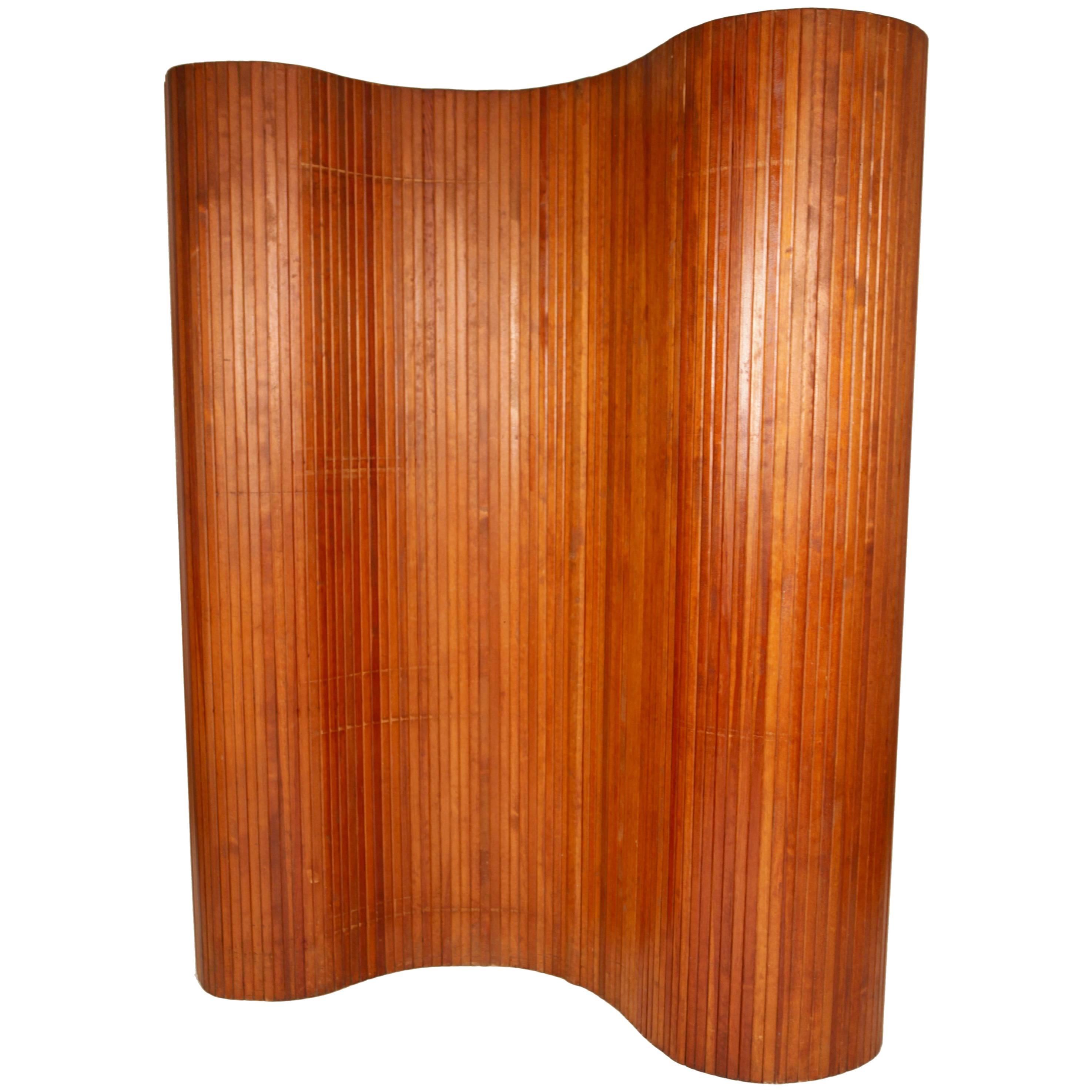 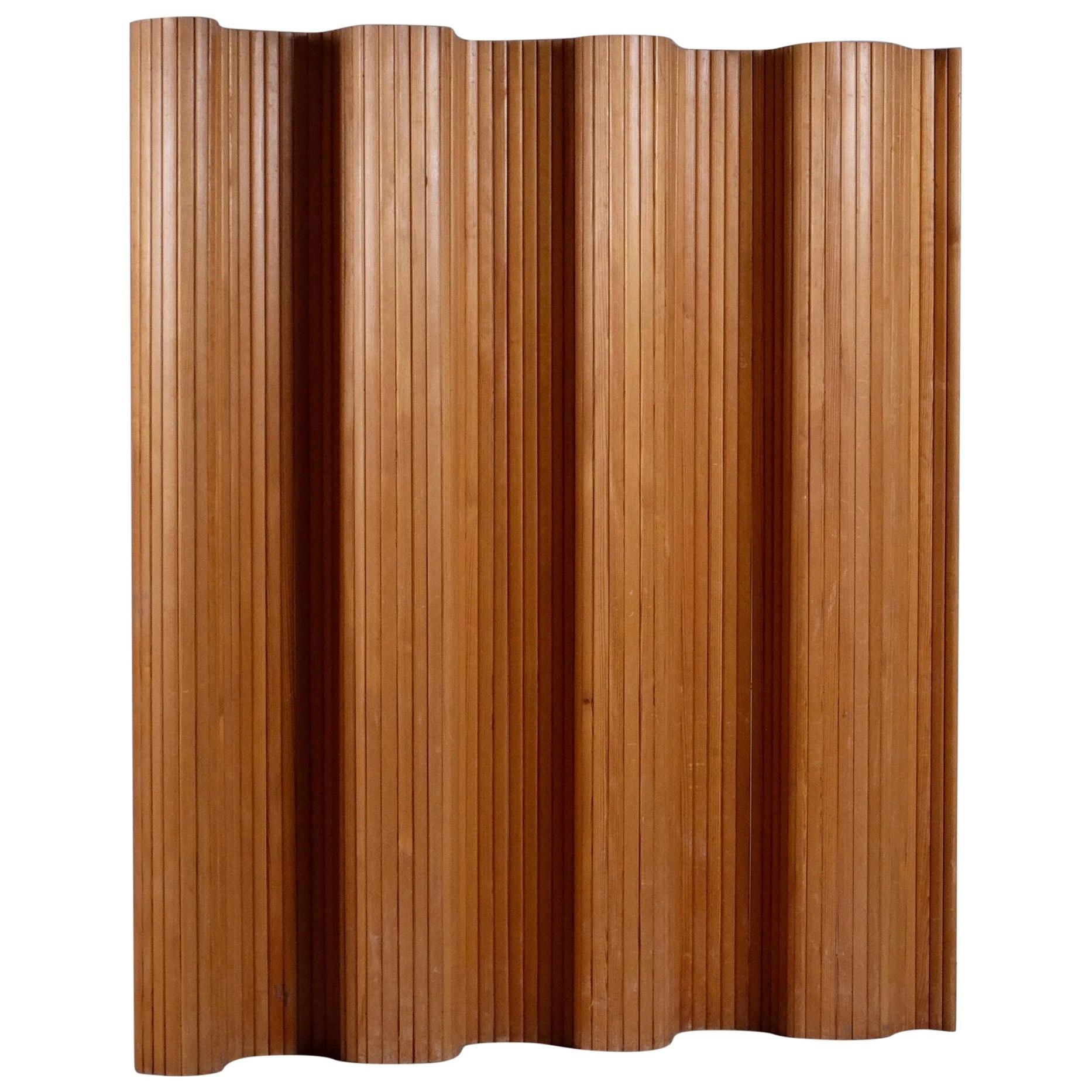 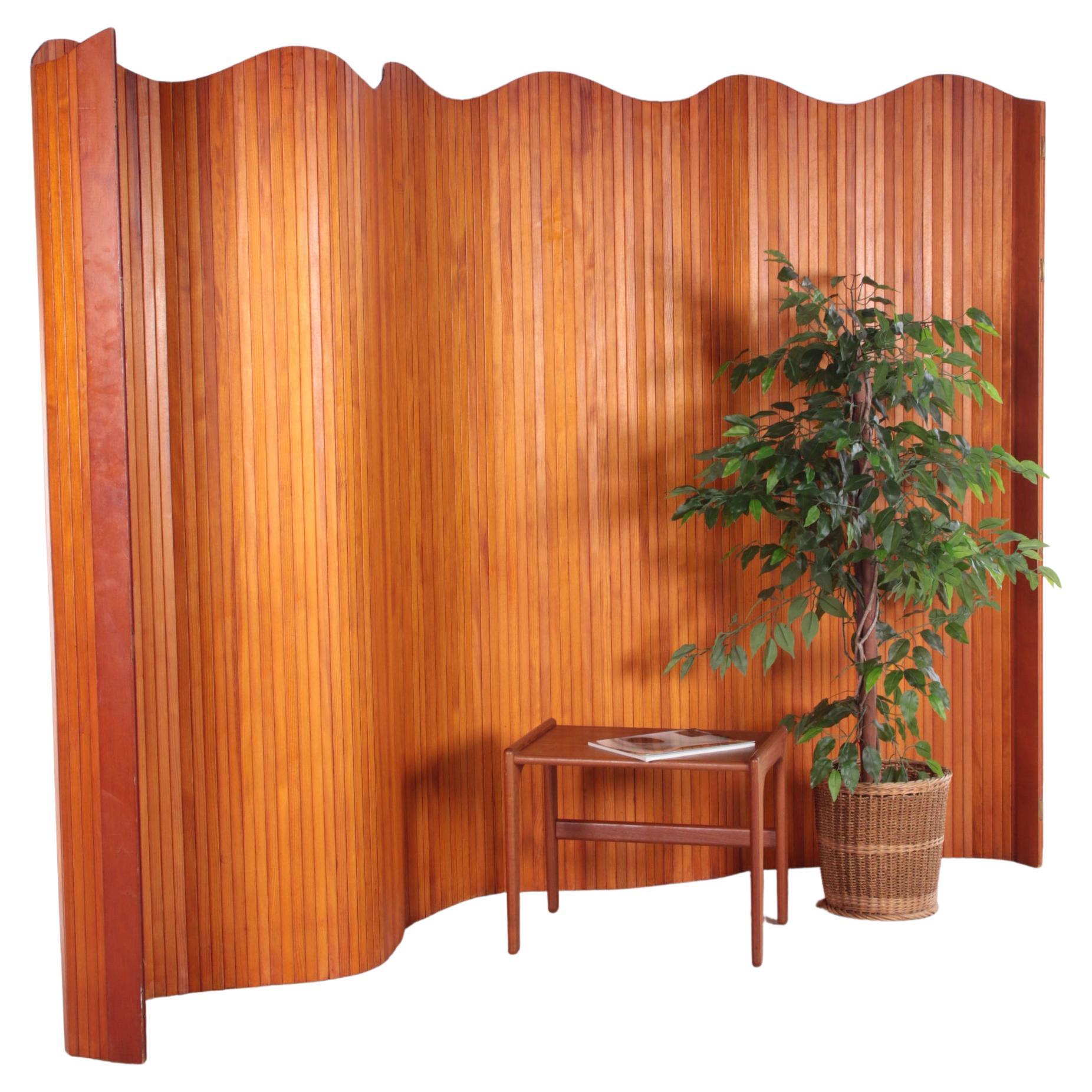 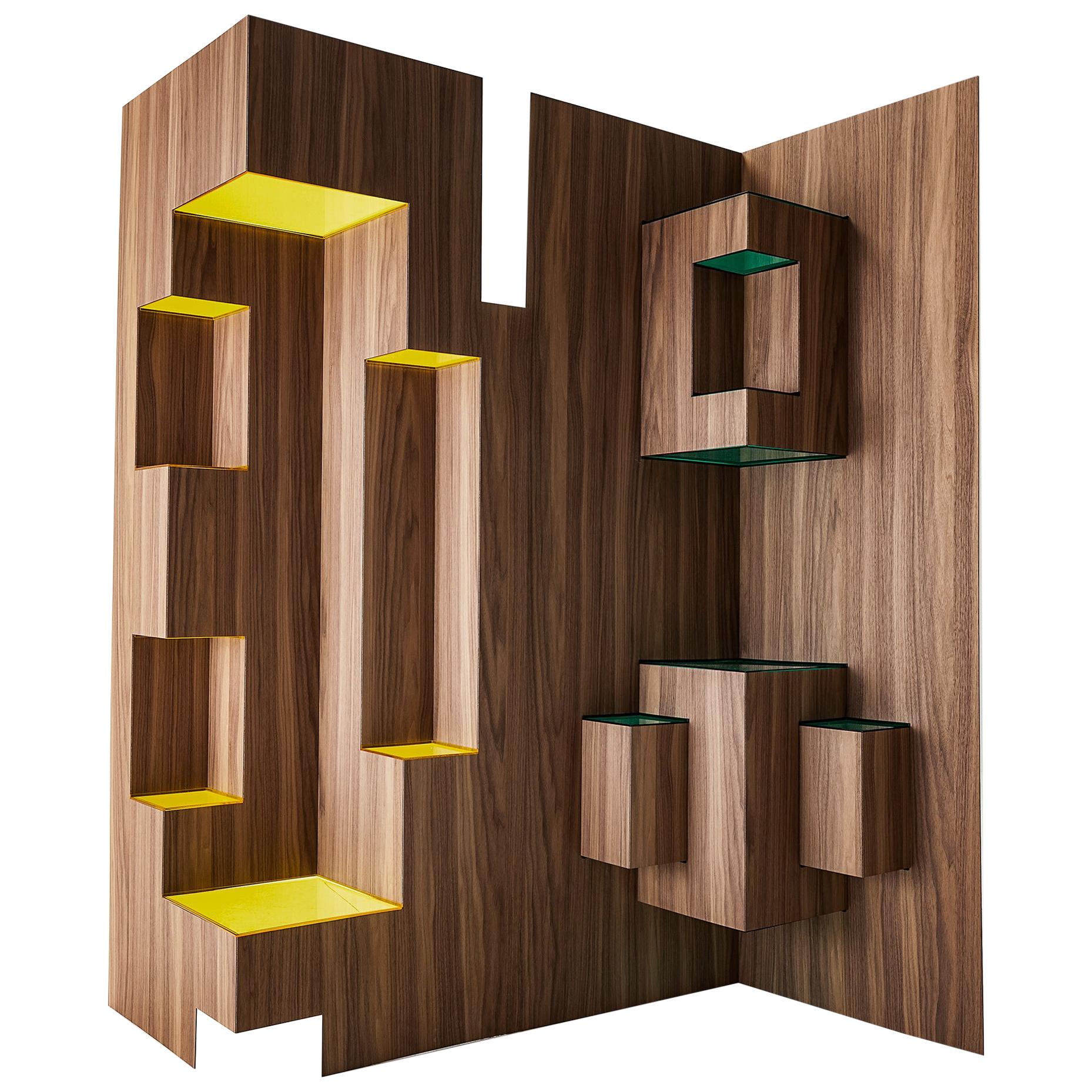 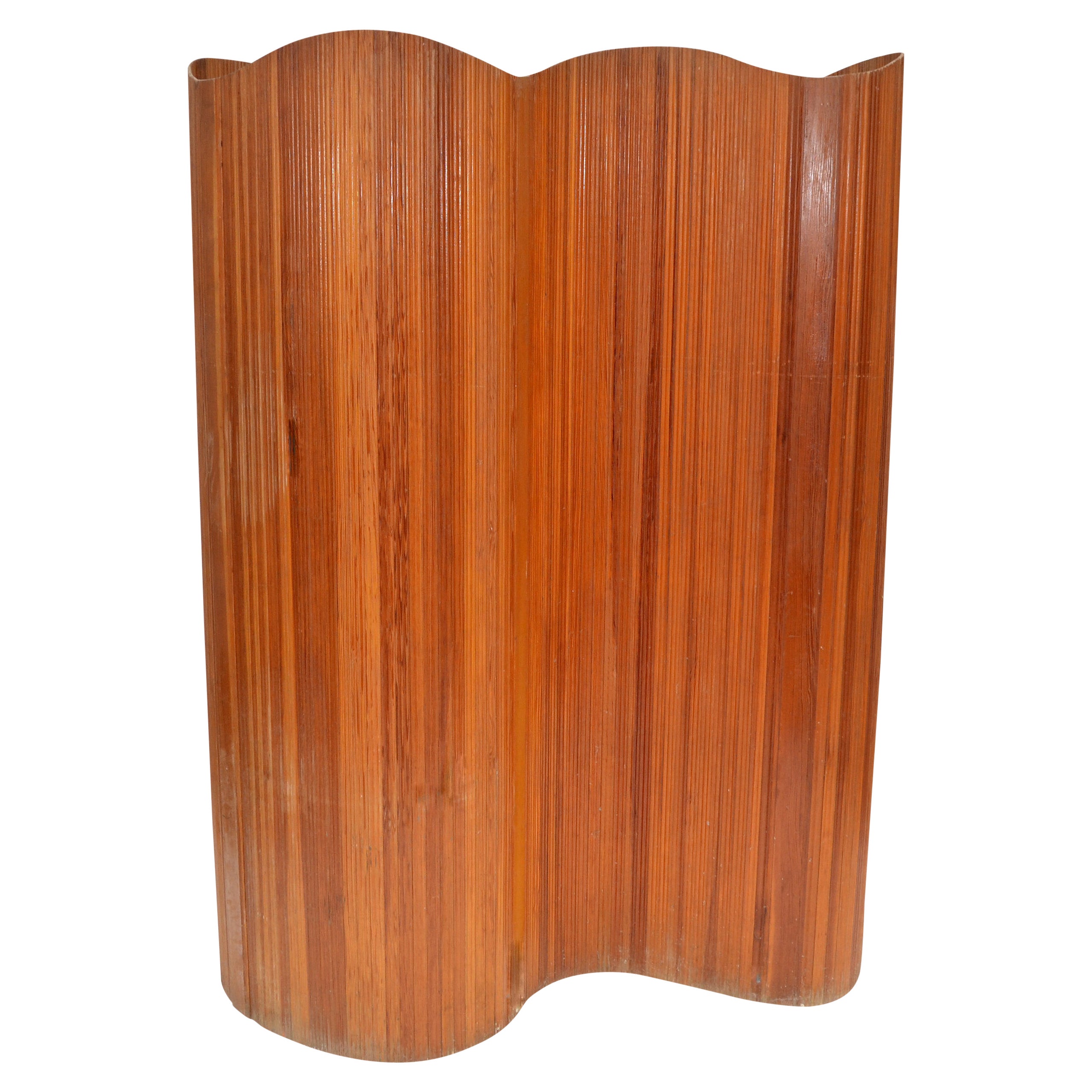 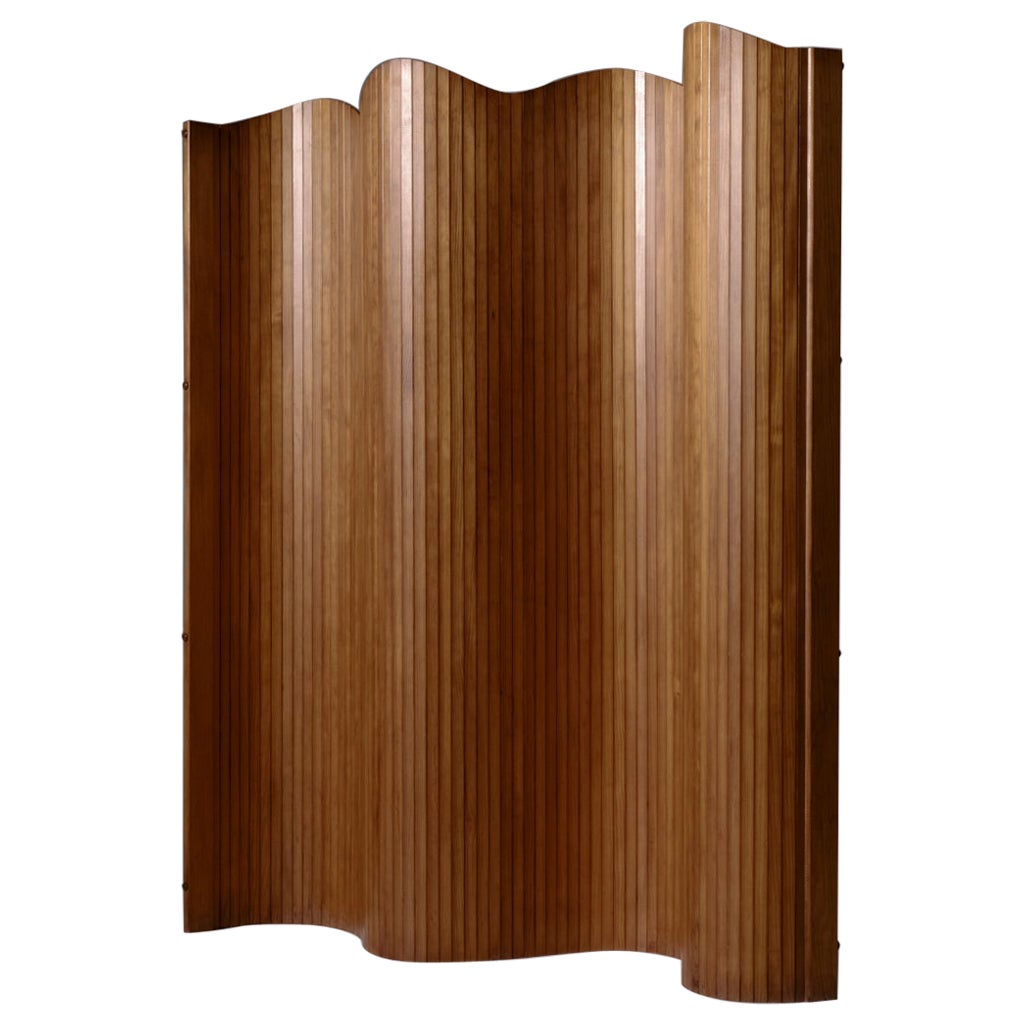 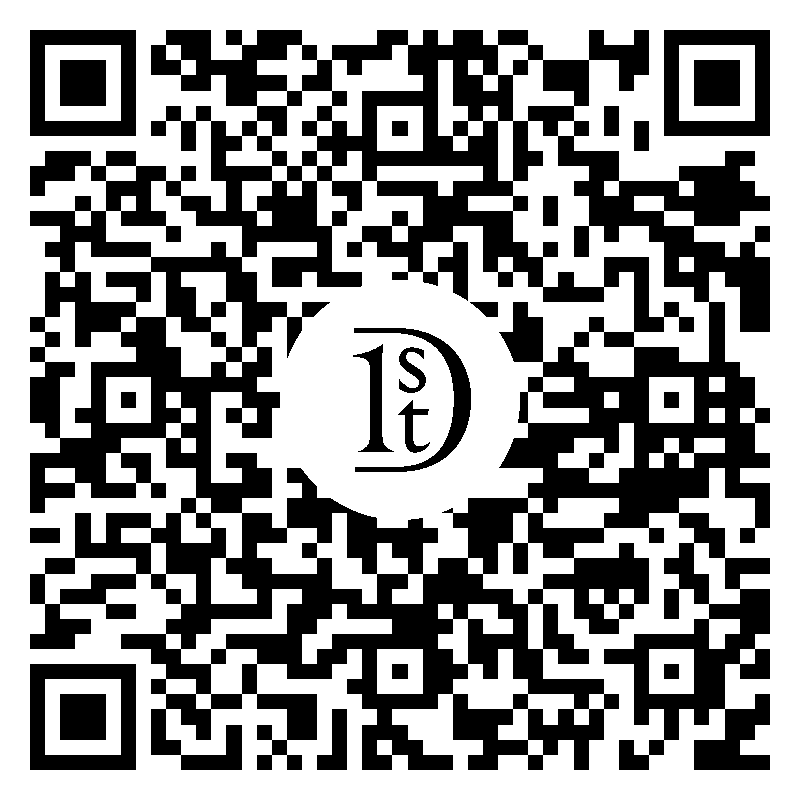 This freestanding model C-20 Sculpta-Grille room divider by Richard Harvey for Harvey Design Workshop, Inc was conceptualized and designed in the 1950s and finally released to the public in 1959 as a line of injection molded architectural screens and room dividers. Popular throughout the 1960s and 1970s, often used as luxury room dividers, privacy screens and architectural elements for modern and contemporary architecture and interior design. This particular model (C-20) is part of the 'Contemporary' collection of modern undulating screens often referred to as the 'Bone' screens due to the resemblance to futuristic skeletal sculptures. We have a number of other examples in different colors and a single one in white that is without a base (if you are looking for a custom install), contact us or see our other listings for more details. *Note, these screens are priced individually and we have 2 available at the time of this listing. The C-20 Contemporary grille is an original sculpture, more massive in appearance than C-10. The bold and dynamic pattern of this sculpture increases in interest through repetition, while the depth and flow of its form creates a wall surface whose beauty of texture equals its value as a grille. The massive quality of the C-20 sculpture belies its light weight, derived through Richard Harvey's exclusive plastics techniques. High strength and high impact resistance are inherent in the structural nature of the panels and wall sections, which are factory prefabricated from the basic module. The unusual depth and design of this grille offers excellent light-diffusing characteristics for facades and window areas. Richard 'Dick' Harvey, born in 1919 was raised in New York City and studied art at Brooklyn Tech High school and received a degree in Mechanical Engineering at City College of New York. His initial goal was a career in the fledgling field of industrial design. Later he began working with his father designing and manufacturing plastic injection molds for the doll industry. In June of 1959 an article and photograph appeared in Interior Design Magazine; inquiries and orders quickly followed. "Harvey Design Workshop" became incorporated and the "Classics" line of "Sculpta-Grille" was officially launched. Methods and tools were developed for assembling the grillwork parts--made of high-quality injection molded plastic--into panels. Articles and installation photographs continued to appear in trade magazines and newspapers from coast to coast. Recently, the Contemporary line has become highly collectable; originals are rare and quite expensive. It has become very popular among set designers, presenting a beautiful mid-century-modern look. Contemporary Sculpta-Grille has been used in many films, television commercials and music videos. These Richard Harvey (sometimes misattributed to Don Harvey) model C 20 'Bone Screen' room separator / floor sculptures would work great in a Mid-Century Modern, Scandanavian Modern or Danish Modern home or penthouse apartment but could also look fantastic in a Contemporary or Post-Modern room. Also consider mixing it up in a Traditional, Transitional, Classical or Art Deco room with a splash of juxtaposition. Would also be an apt choice in a commercial project such as a hotel lobby lounge or members club, creative design studio or high-rise executive office. MEASUREMENTS: H 74.5" x W 33.5" x D 19.5" (Bone screen part only) H 56.25" x W 33.5" x D 4.75" CONDITION: Very good condition with minor wear as expected from age including minor scratches, scuffs, nicks and craquelure. Heavy and high quality, this piece will last a lifetime and is ready for immediate use.

Recognized Seller
These prestigious sellers are industry leaders and represent the highest echelon for item quality and design.
Diamond Seller
These expertly vetted sellers are 1stDibs' most experienced sellers and are rated highest by our customers.
Established in 2012
1stDibs seller since 2015
1,600 sales on 1stDibs
Typical response time: 2 hours
Associations
20th Century Specialists
More From This Seller

$13,735 Sale Price
24% Off
Xavier Corberó Music Wall Sculpture / room divider, Spain, 1987
By Xavier Corberó i Olivella
Located in London, GB
Xavier Corberó (1935-2017) is regarded as one of the most important artists to come out of Spain in the last 50 years. His monumental public works can be viewed across Spain as well ...
Category

$23,980
Colorful Midcentury Sunshine Metal Room Divider in- or Outdoor, 1960s
Located in Nürnberg, Bayern
Was mounted on the wall, there are holes for wall mounting. Could also be mounted on the ceiling. The paint is partly off, here and there rust. But therefore has its absolute vi...
Category