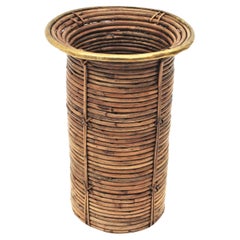 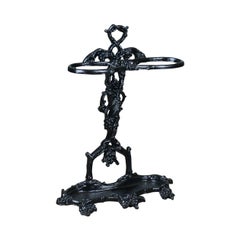 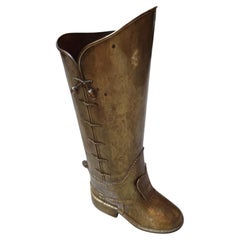 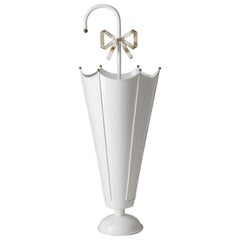 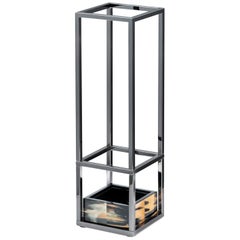 French Brass Umbrella Stand
Located in Los Angeles, CA
A very nice French umbrella Stand of Brass with 7 Openings atop and a removable tray below for excess water. The piece is a compliment to many entry ways, mud rooms, and would also b...
Category

Schonbuch Angle Black Umbrella Stand by Designstudio Speziell
By Schönbuch
Located in New York, NY
In powder-coated steel Creative space sensation. The angle umbrella stand is made of black, powder-coated metal and is great as a room divider or screen. Irrespective of use, it is a...
Category

Schonbuch Saro Glass Umbrella Stand Designed by Hanne Willmann
By Schönbuch
Located in New York, NY
The SARO umbrella stand turns glass into something truly special. The hourglass-like shape and semi-transparent hues make it an eye-catching piece for entrance areas. It comes in a r...
Category

Tall Leather Umbrella Stand, circa 1915
Located in London, GB
A superb leather cordite carrier which would make a perfect umbrella or polo stick stand. Constructed from a core of cork, bound in leather and lined in canvas. This munitions contai...
Category

Vintage Metal Umbrella Stand with Bamboo Handle, 1960s
Located in Oostrum-Venray, NL
Vintage umbrella stand from the sixties. Finished in black perforated metal with a chrome frame. the condition is good, How nice is this in your hall to store the umbrellas. The h...
Category

Gothic Revival Quatrefoil Design Umbrella & Stick Stand w. Hand Painted Irises
Located in Lisse, NL
A fine work of Gothic Art depicting iris flowers, associated with the Passion of Christ and the Resurrection. This Gothic quatrefoil design umbrella stand is another one of our rece...
Category

Bamboo and Rattan Magazine Rack, French Work, Circa 1950
Located in Marcq-en-Baroeul, FR
This magazine rack is made of bamboo and rattan. This is a French Work. Circa 1950.
Category

Mid Century Umbrella Stand Willow Twigs, 1960 Belgium
Located in Herentals, BE
The umbrella stand is made of varnished willow twigs. The bottom is round, wooden plate, and the top is oval. The umbrella stand ends in an oval shape and is fitted with a handle. ...
Category

Italian Bamboo Umbrella Stand, 1960s
Located in Nürnberg, Bayern
Impressive in scale and super sturdy with wonderful patina. An object for itself.
Category

Schonbuch Saro Glass Umbrella Stand Designed by Hanne Willmann
By Schönbuch
Located in New York, NY
The SARO umbrella Stand turns glass into something truly special. The hourglass-like shape and semi-transparent hues make it an eye-catching piece for entrance areas. It comes in a r...
Category

Large Irish Green Pedestal Drum Stand with Picture of a Victorian Lady on
Located in GB
We are delighted to offer for sale this lovely hand made in Ireland green pedestal stand with Victorian lady picture A good looking and decorative piece, I have no idea how old it...
Category

Danese Milano Sicilia 56 Umbrella Stand in Stainless Steel by Bruno Munari
By Bruno Munari, Danese Milano
Located in Hicksville, NY
Sicilia 56 is a cylinder with a hexagonal base and the function of umbrella stand. The structure is made of polished stainless steel. Bruno Munari was one of the most important It...
Category

When it’s raining, you’re going to need an umbrella, and that wet umbrella is going to need a home. In the range of vintage, new and antique umbrella stands on 1stDibs, find patio umbrella stands made for the outdoors and luxury iterations intended to pair with your coat rack and add a dose of character to your entryway.

Modern umbrellas originated as parasols or sunshades for the upper classes in Ancient Egypt, Ancient India and elsewhere, with the accessory undergoing significant improvements, which included waterproofing, in China thereafter. The Chinese created collapsible accessories and applied wax and lacquer to paper parasols, which repelled rain during thunderstorms. As umbrellas saw widespread adoption over the years, we suddenly needed a place to put them.

African-American inventor William C. Carter of Cincinnati, Ohio, patented the first umbrella stand in 1885. His receptacle featured horizontal crossbars with hinged ends that allowed for umbrellas to be spring-locked into place. Carter hoped his idea would prevent theft of umbrellas and canes as well as present an orderly solution for storing them. It could hold more than one umbrella and contained a drip pan to catch rainwater. Today, antique umbrella stands are rich components of home decor — they’re among the first furnishings you see when you enter someone’s house or apartment — and those stemming from Carter’s day are precious collector’s items.

While preliminary umbrella stands were simple (no more than two posts and a rack to hold several umbrellas), furniture makers embellished their interpretations, adding decorative flourishes and improving upon its features over time.

On 1stDibs, a collection of antique 19th-century umbrella stands includes structures made of oak, walnut and more. There are understated Victorian-era umbrella stands made of brass that comprise little more than four tubular metal supports and cast-iron drip pans, while iterations dating from the same era made from mahogany feature distinctive hand-carvings on their side panels or ornate finials. If they’re not cast-iron umbrella stands, a (sometimes removable) cast-iron drip pan at the very least is a fairly consistent characteristic of the stands of the era.

Mid-century modern furniture designers explored venturesome forms and worked with a variety of materials to craft their umbrella stands, integrating metals such as aluminum and introducing glass and even marble to these pieces. Umbrella stands crafted by contemporary furniture makers often depart from their historical counterparts. While a sampling of today’s iterations demonstrate that creators are making umbrella stands in a variety of shapes and sizes, they’re frequently embodying clean lines and minimalist flourishes, which are perhaps a good fit if you don’t intend for your rack to stand out in your foyer or entryway.

If you’re looking to make a statement with your patio umbrella stand or the piece you’re intending to keep indoors, a vintage ceramic umbrella stand will introduce a pop of color or a dazzling texture to your doorstep or to the neutral color palette that characterizes your entryway.

While umbrella stands have seen an evolution of design over the years, their usefulness hasn’t changed a bit. Browse a collection of antique, new and vintage umbrella stands today on 1stDibs.