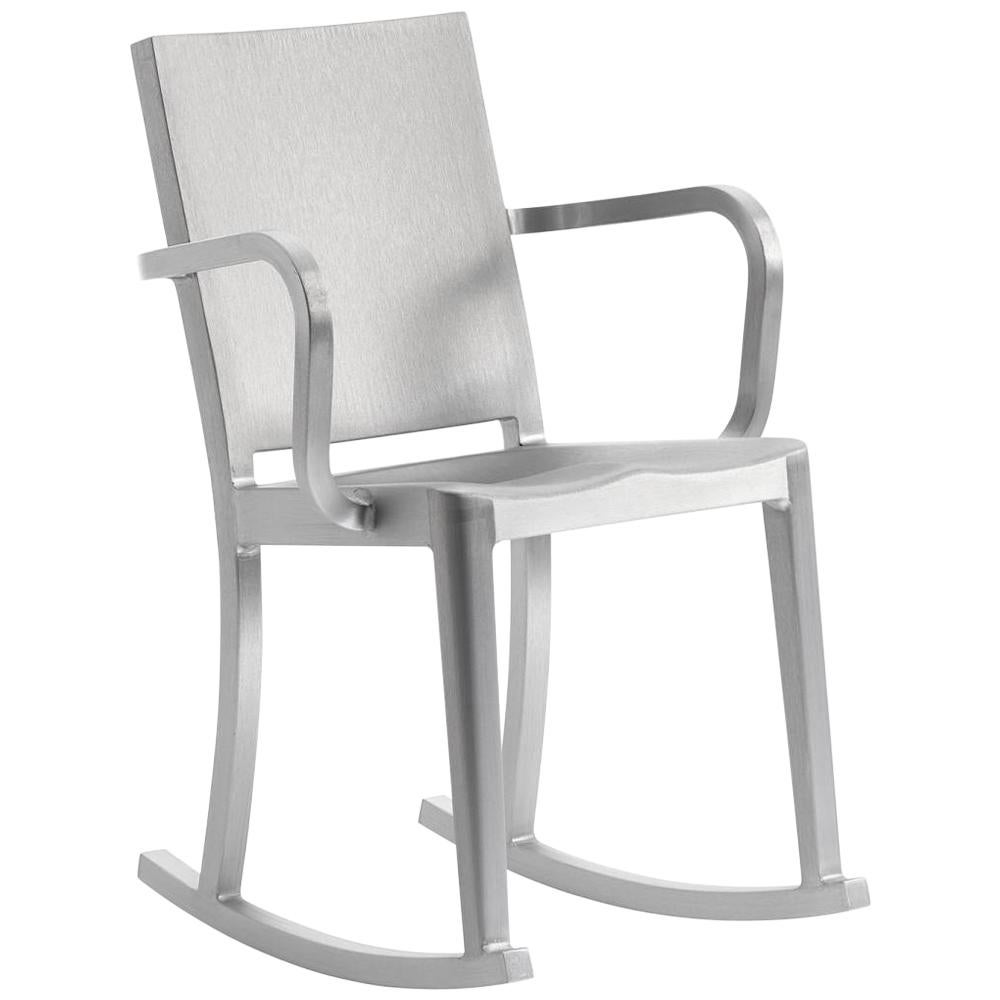 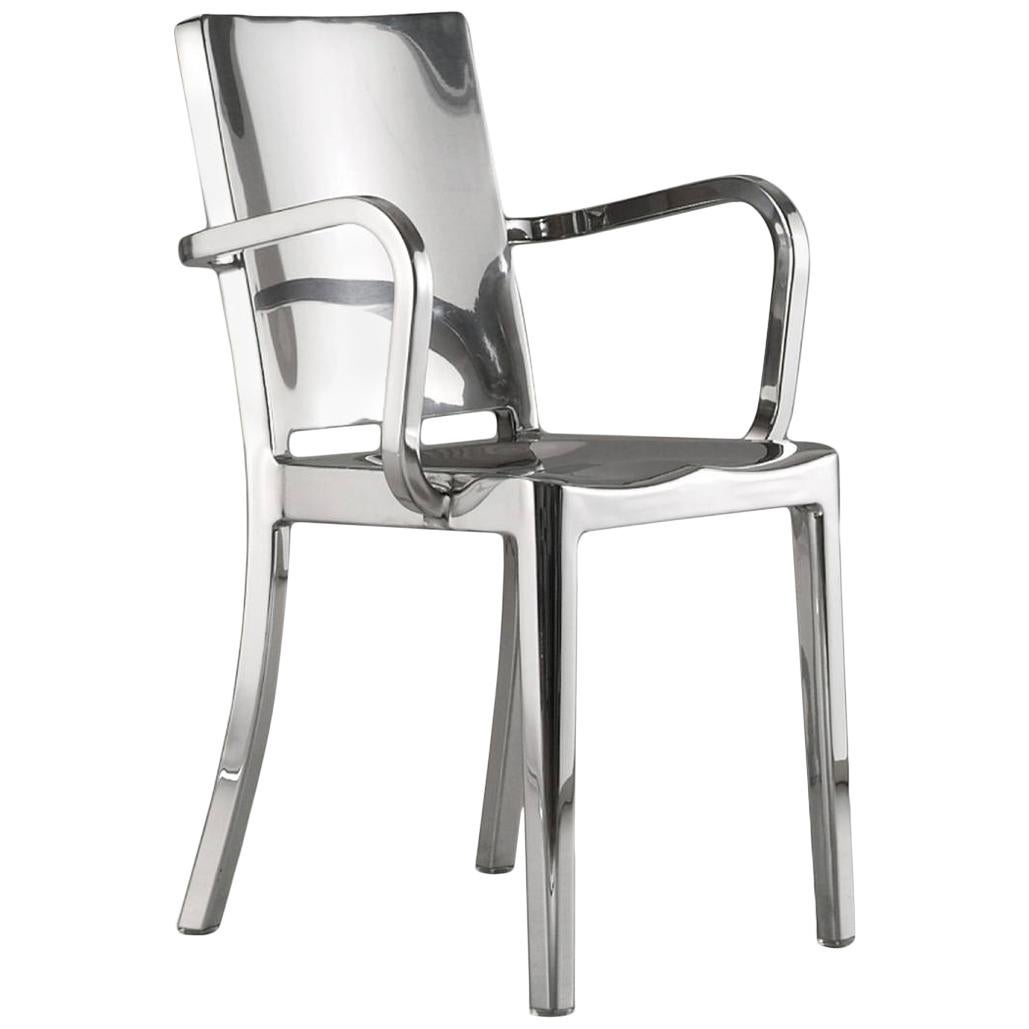 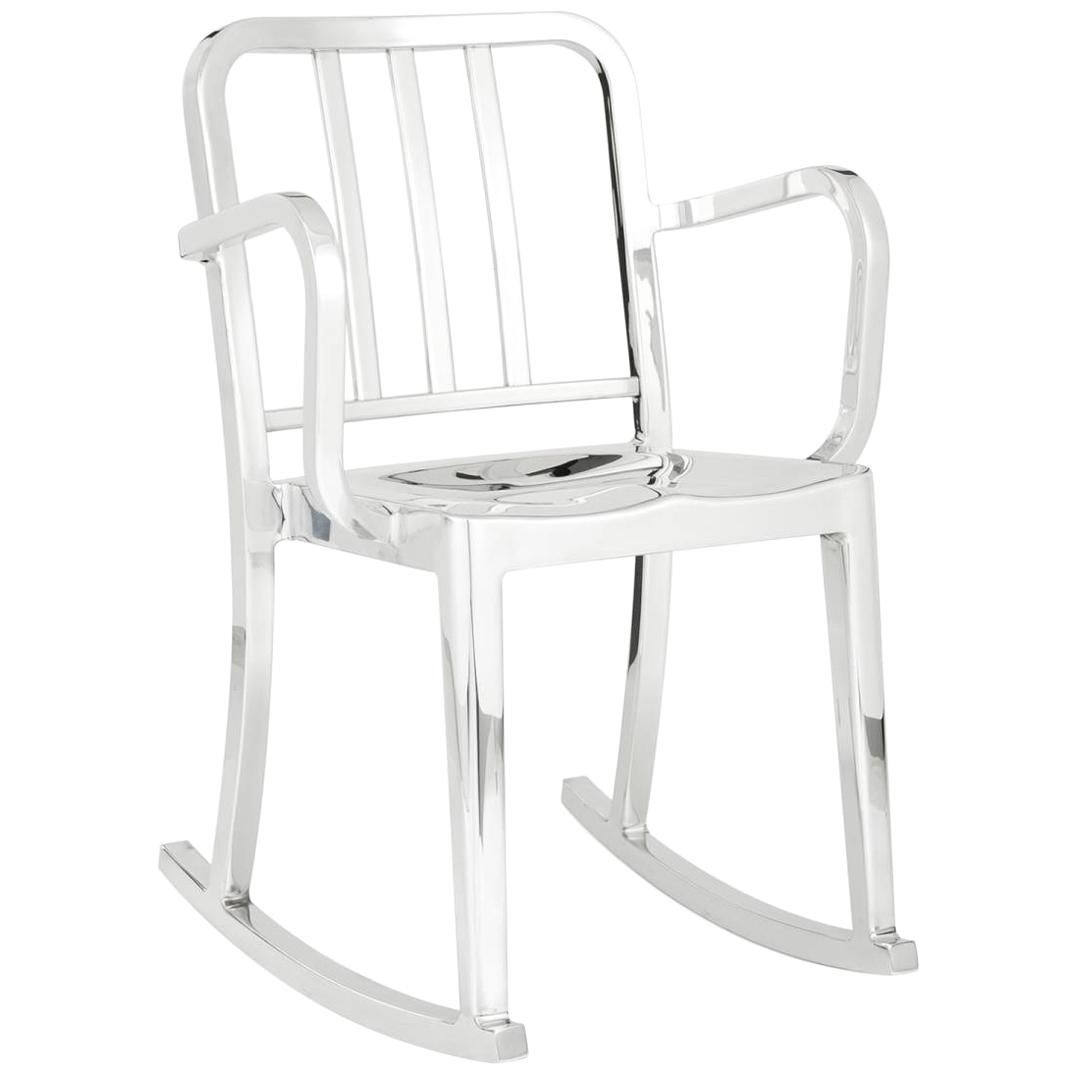 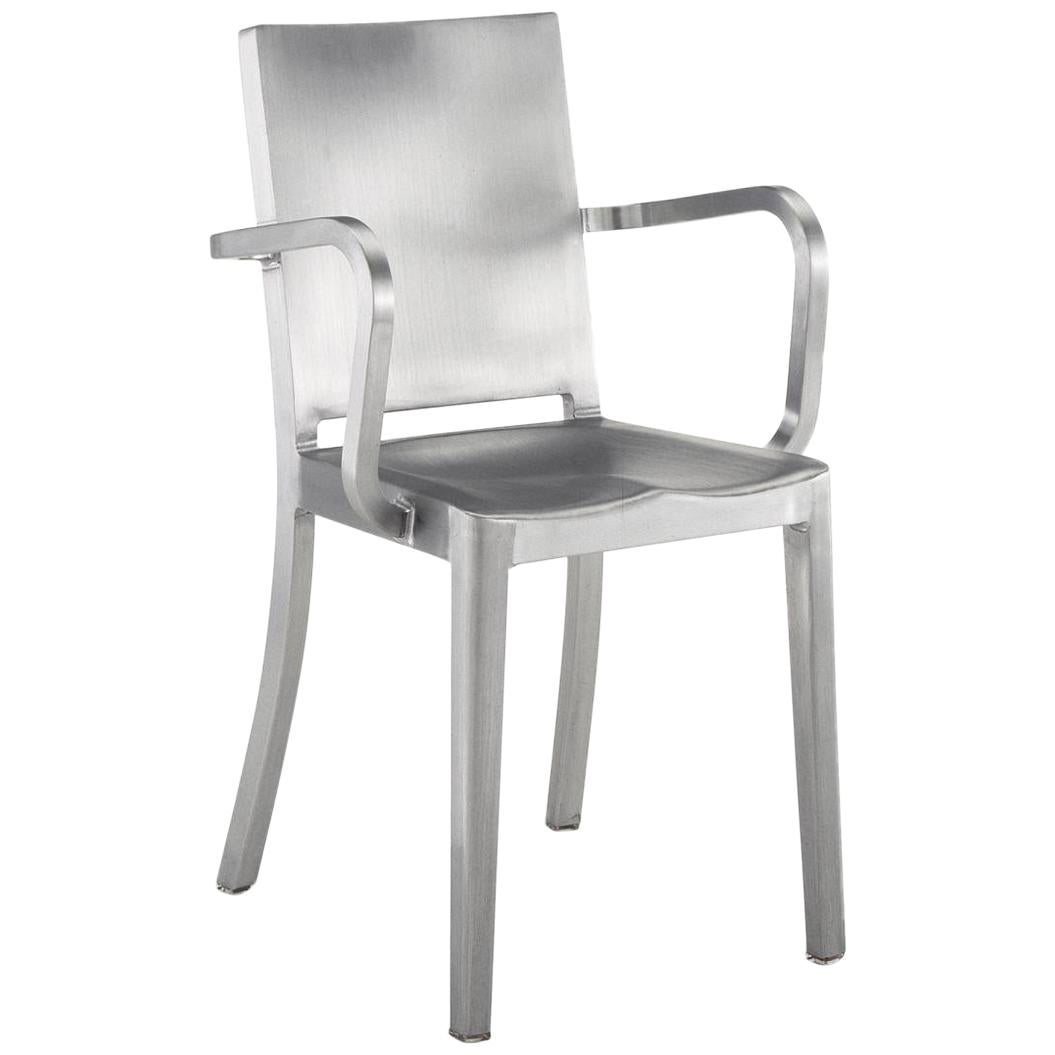 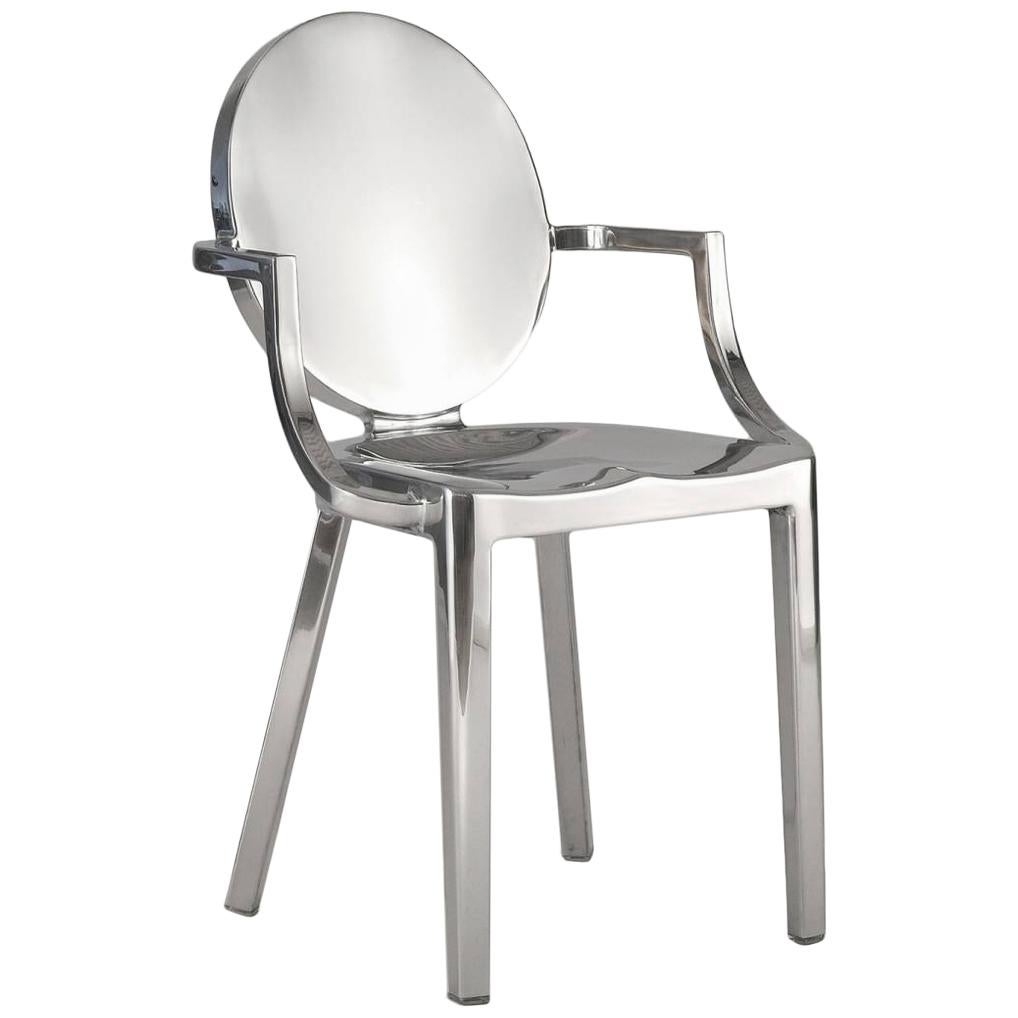 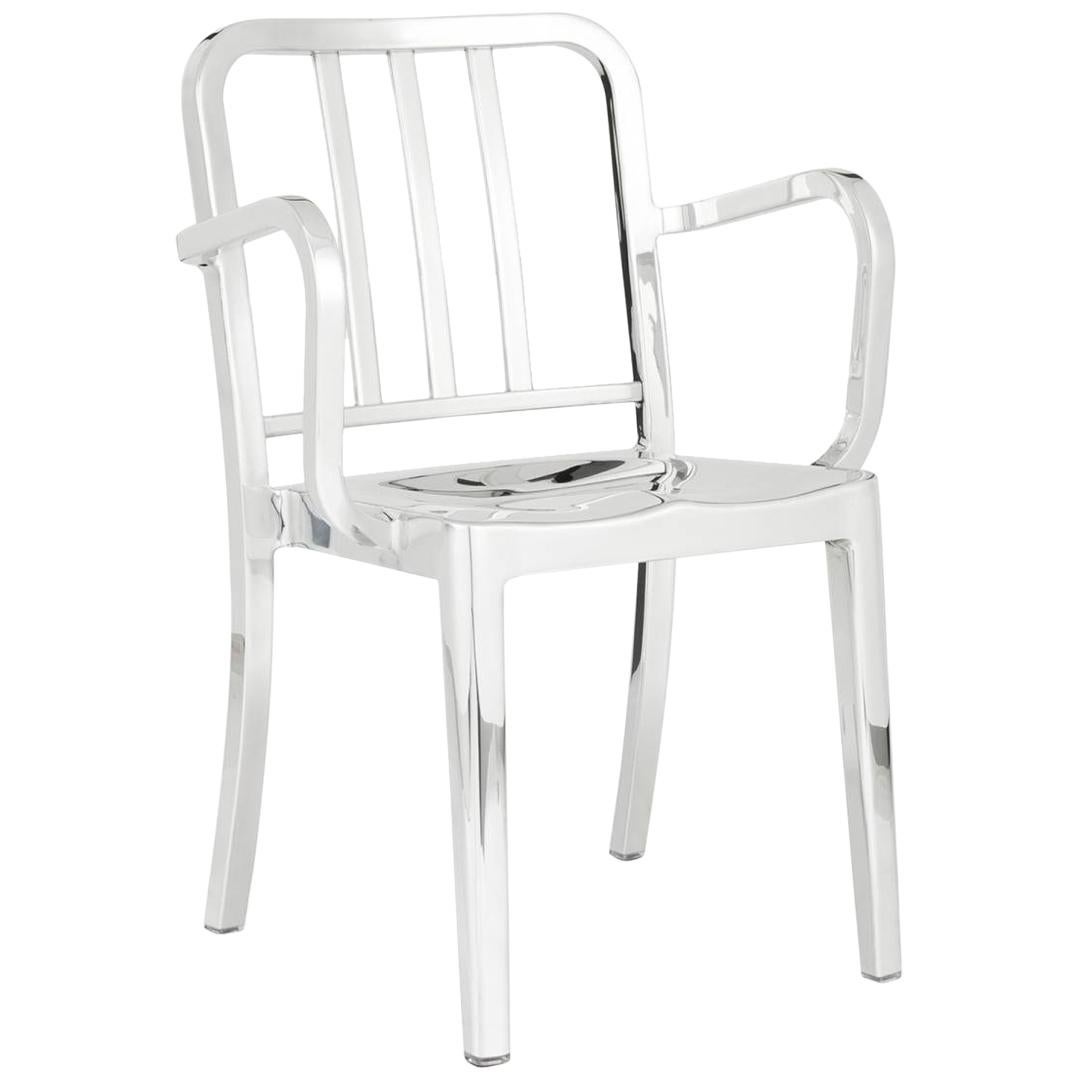 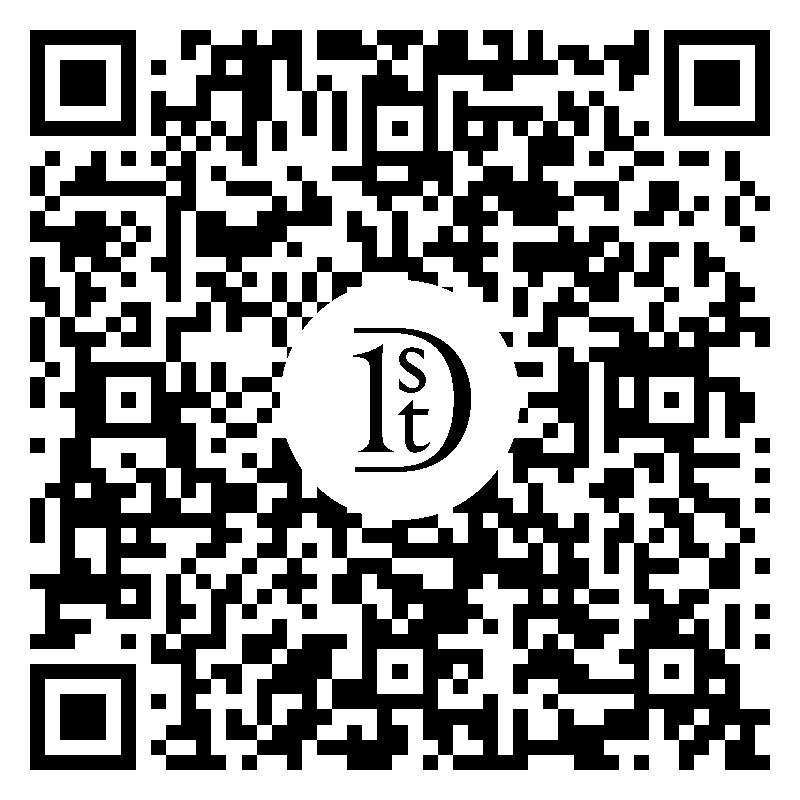 The Hudson, designed for the Hudson hotel in NYC, is Emeco and Starck’s first collaboration. Starck described the chair as “washing the details from the Navy Chair”. It takes an additional 8 hours to polish each Hudson chair. Hudson is in MoMa’s permanent collection. Measure: Arm height 27 1/2". Made of recycled aluminum. Product is eco-friendly. Integrity testing certification available upon request. 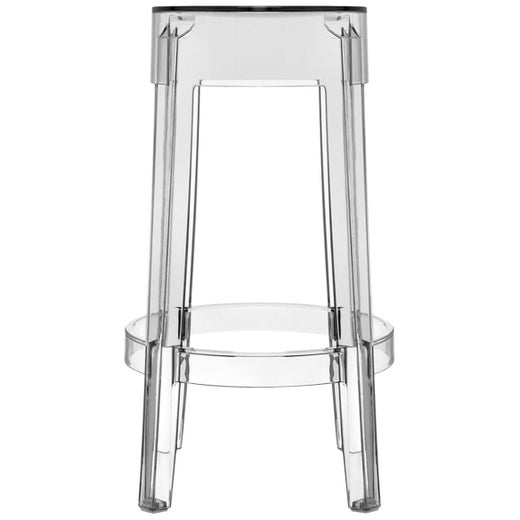 A ubiquitous name in the world of contemporary architecture and design, Philippe Starck has created everything from hotel interiors and luxury yachts to toothbrushes and teakettles. Yet for every project in his diverse portfolio, Starck has maintained an instantly recognizable signature style: a look that is dynamic, sleek, fluid and witty.

The son of an aircraft engineer, Starck studied interior design at the École Nissim de Camondo in Paris. He started his design career in the 1970s decorating nightclubs in the city, and his reputation for spirited and original interiors earned him a commission in 1983 from French president François Mitterrand to design the private apartments of the Élysée Palace. Starck made his name internationally in 1988 with his design for the interiors of the Royalton Hotel in New York, a strikingly novel environment featuring jewel-toned carpeting and upholstery and furnishings with organically shaped cast-aluminum frames. He followed that up in 1990 with an equally impressive redesign of the Paramount Hotel in Manhattan, a project that featured over-scaled furniture as well as headboards that mimicked Old Masters paintings.

Like their designer, furniture pieces by Starck seem to enjoy attention. Designs such as the wedge-shaped J Series club chair; the sweeping molded-mahogany Costes chair; the provocative Ara table lamp; or the sinuous WW stool never fail to raise eyebrows. Other Starck pieces make winking postmodern references to historical designs. His polycarbonate Louis Ghost armchair puts a new twist on Louis XVI furniture; his Out-In chair offers a futuristic take on the classic English high-back chair. But for all his flair, Starck maintains a populist vision of design. While one of his limited-edition Prince de Fribourg et Treyer armchairs might be priced at $7,000, a plastic Starck chair for the Italian firm Kartell is available for around $250. As you will see on 1stDibs, Philippe Starck’s furniture makes a bold statement — and it can add a welcome bit of humor to even the most traditional decor. 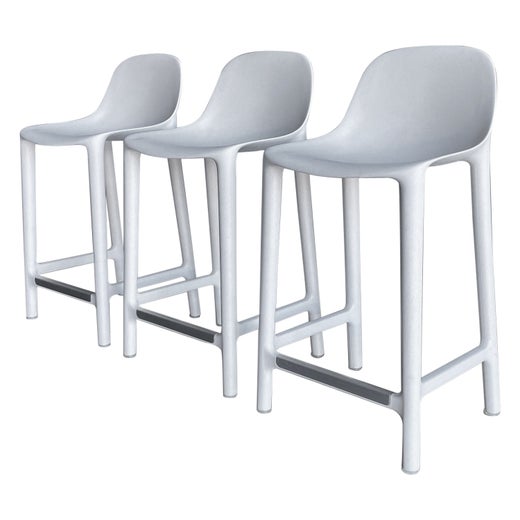 While they’re best known for their revolutionary Navy chair, iconic American furniture company Emeco makes a whole range of seating and other furniture — not just seaworthy chairs. The development of each product is guided by an eco-friendly ethos and pragmatic approach to design.

Emeco began to take shape during the 1940s, when the U.S. Navy needed a lightweight, fireproof chair that could withstand a torpedo blast and hold up to use by “big, burly sailors,” says Gregg Buchbinder, Emeco’s chief executive.

With experts from the Aluminum Company of America, an engineer named Wilton C. Dinges (1916–74) delivered, and the Emeco 1006 — that is, the Navy chair — an aluminum classic, was born. In order to demonstrate the chair’s sturdiness, Dinges threw it from the eighth floor of a hotel in Chicago, and when it landed, the chair bounced in lieu of breaking or bending.

The engineer secured a contract to manufacture the Navy chair beginning in 1944 at the Electrical Machine and Equipment Company (Emeco), which he’d founded a few years earlier in Hanover, Pennsylvania. In the ensuing decades, the factory’s craftsmen would stamp out by hand hundreds of thousands of Navy chairs for battleships, aircraft carriers and submarines — a process that requires more than 70 steps.

Today, the impossibly durable Navy chair, which is recyclable and made of at least 80 percent recycled aluminum, inspires knockoffs left and right and can be found in a variety of public settings, from upscale restaurants to hotels and offices. But it took time to get here.

In 1979, Gregg’s father, Jay Buchbinder, a businessman whose Long Beach, California, furniture company manufactured seating for fast food restaurants, purchased Emeco. The company hit a rough patch in the 1990s. When Gregg acquired Emeco from Jay in 1998, he took the $2 million in debt that came along with it. Fortuitously, Gregg learned that the Navy chair had taken on a new nonmilitary identity around the same time and that it was increasingly seen as sleek and retro in addition to being great submarine seating. Orders for the Navy chair were coming in from design luminaries like Ettore Sottsass, Giorgio Armani and a daring young French designer named Philippe Starck, who purchased a large number of 1006s for Ian Schrager’s Paramount hotel in New York City.

Gregg seized on Emeco’s newfound popularity, initiating a partnership with Starck, who would design the company’s Hudson Collection, a line planned for Manhattan’s Hudson Hotel that saw the Navy chair take on the form of a barstool and other pieces. He also partnered with Frank Gehry, whose Superlight chair for Emeco can be hoisted off the ground with one hand. Collaborations with Jasper Morrison, Jean Nouvel and others followed, and today, Emeco continues to build durable seating furniture from a range of recycled materials with a variety of designers.

1stDibs Buyer Protection Guaranteed
If your item arrives not as described, we’ll work with you and the seller to make it right. Learn More
About the Seller
4.7
Located in Hanover, PA
Vetted Seller
These experienced sellers undergo a comprehensive evaluation by our team of in-house experts.
Established in 1944
1stDibs seller since 2019
57 sales on 1stDibs
Typical response time: 1 to 2 days
More From This SellerView All
People Also Browsed
You May Also Like