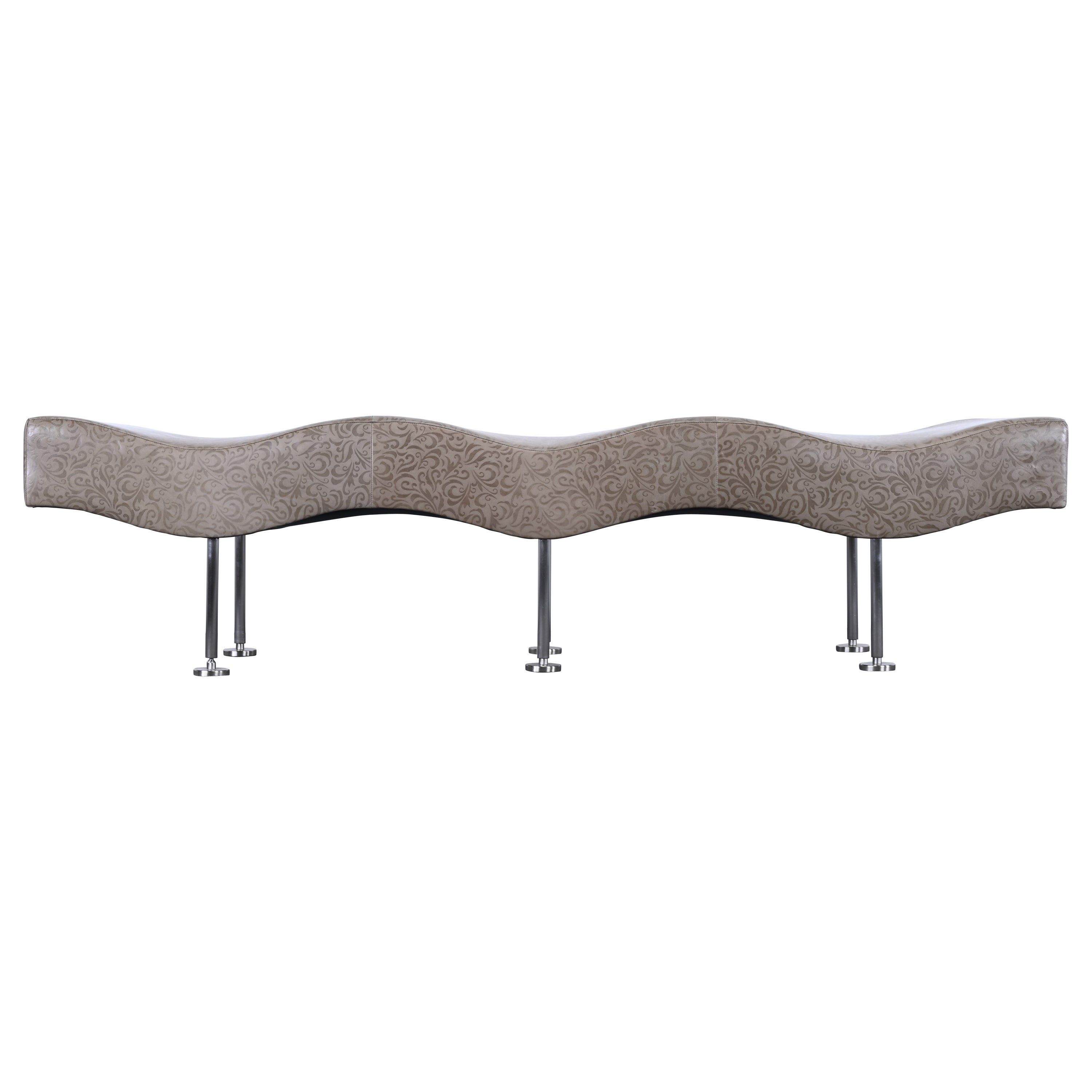 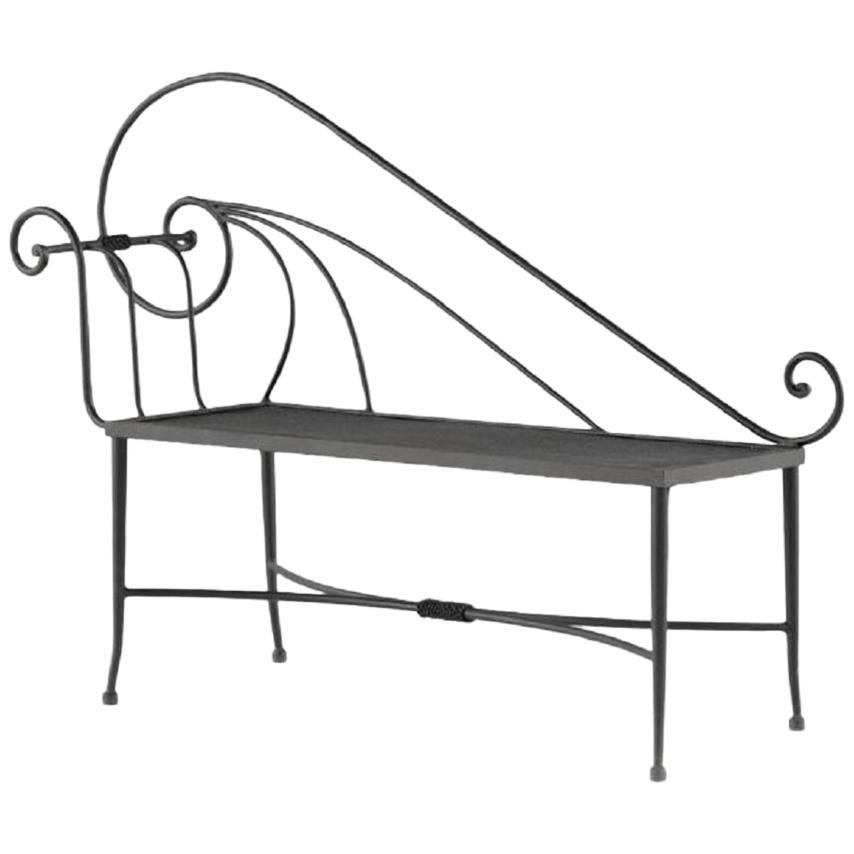 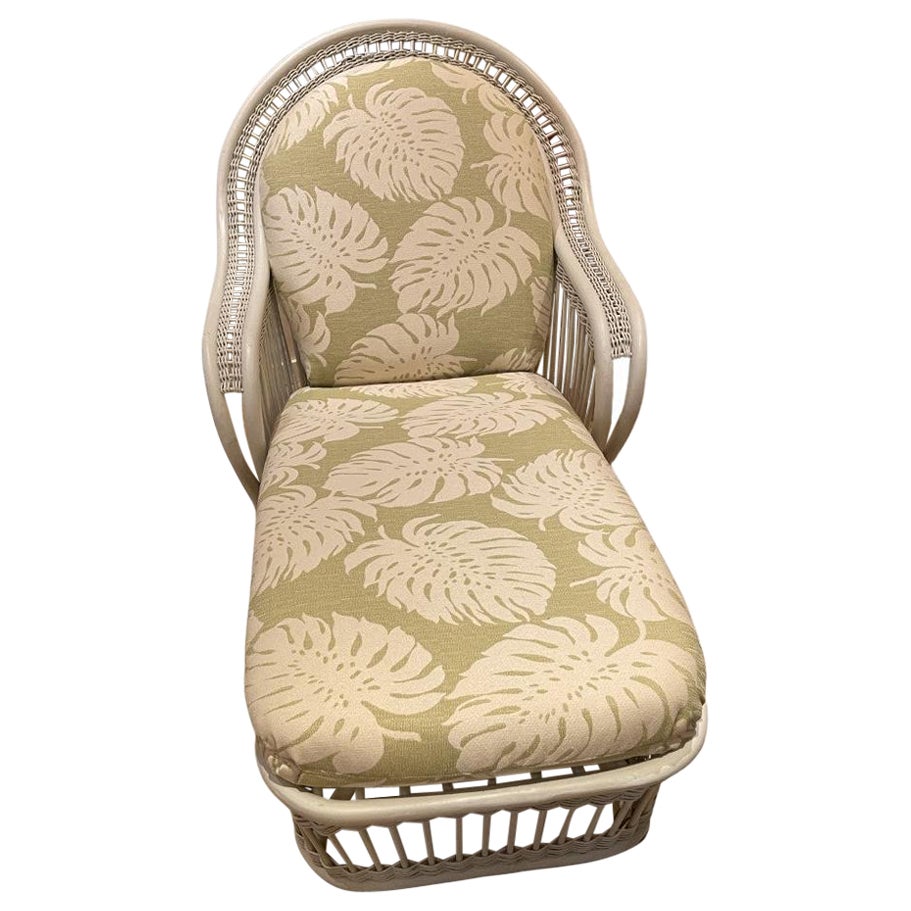 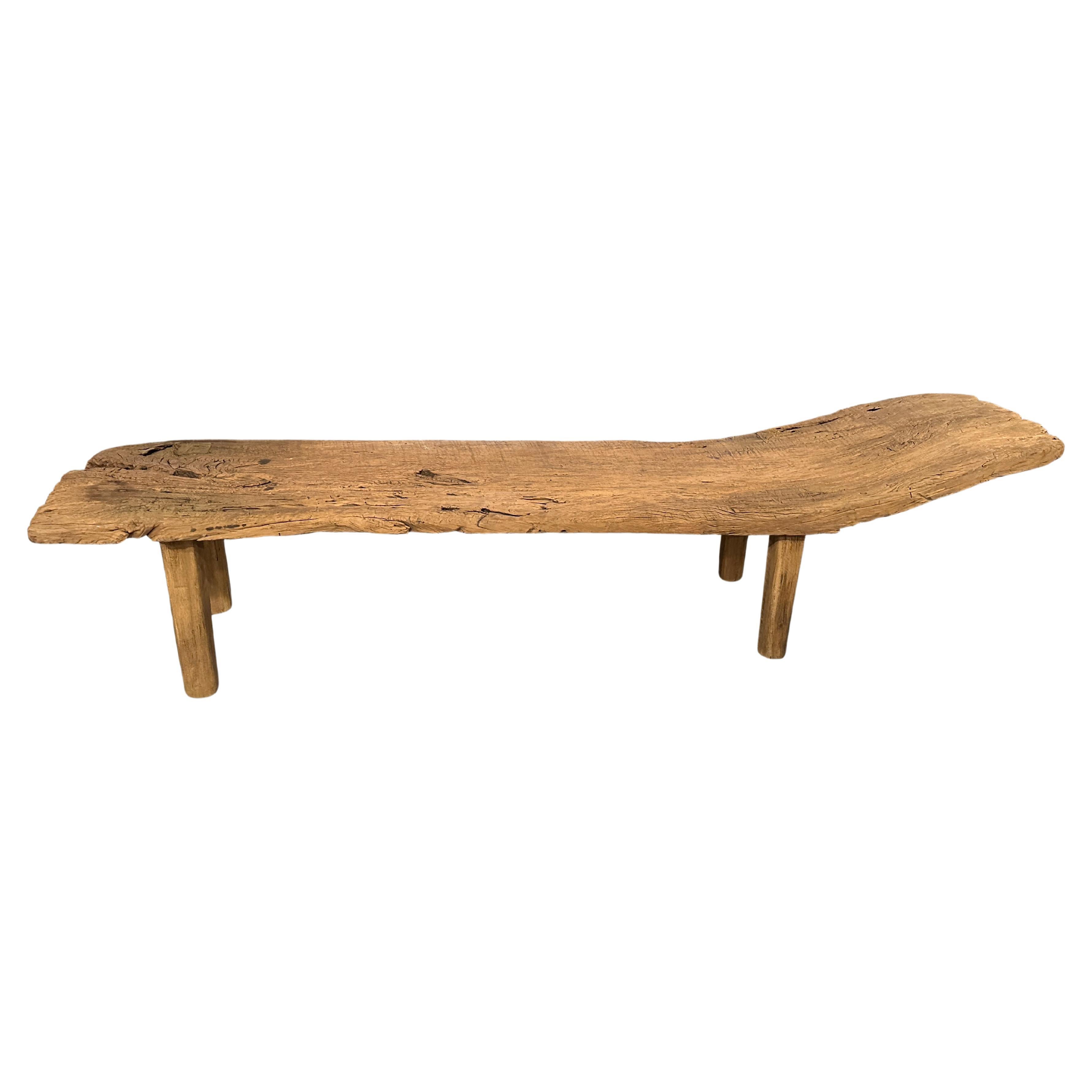 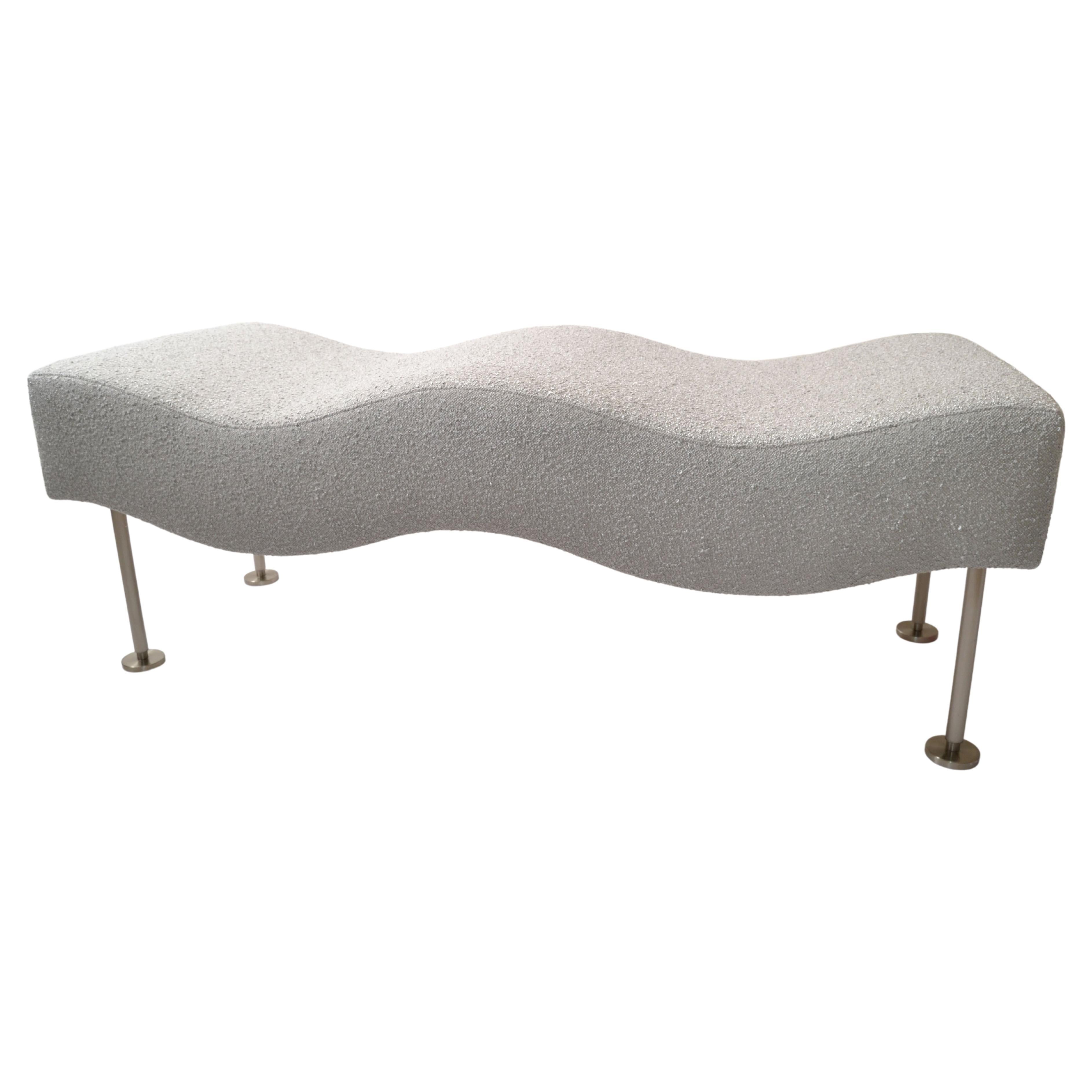 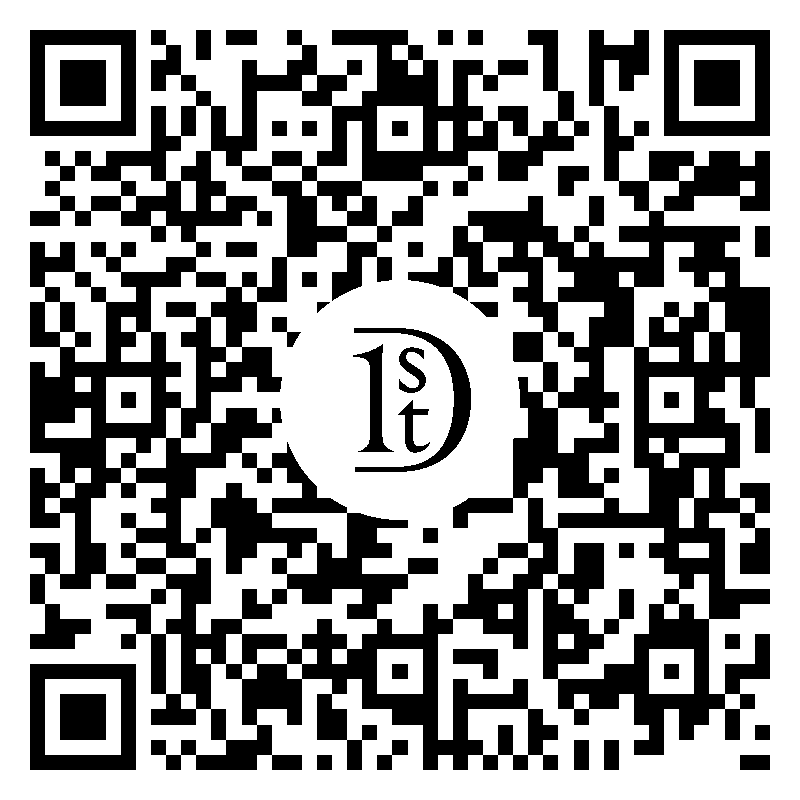 This Brueton vintage backless and undulating wave chaise bench is very sculptural. It was designed by Stanley Jay Friedman for Brueton in the 80's and has been coined and titled the Undulatus chaise. It has been newly upholstered in a white textural weave fabric. All new insides were placed in. The legs that are satin stainless steel were polished to the best they can be now. There are higher and lower points on the chaise as it creates a wave. There is a feeling of momentum. It is most chic and most au courant now. Simply put. Just fabulous. It has good weight and will just float beautifully in a room setting. 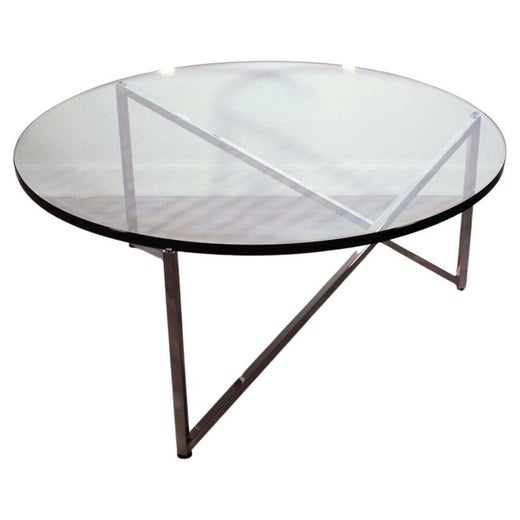 Initially known as Spanish Metal Arts — a supplier of fencing for stately homes on Long Island — the principals at New York furniture manufacturer Brueton were artistically minded from the start, ensuring that their furniture company would become a major player in the world of stylish, modern stainless steel-based design. The company’s sculptural glass-topped dining tables and vintage mid-century modern chrome-framed armchairs are welcome additions to any contemporary interior.

Brueton got its start with the Manufacturers Hanover Trust building in Manhattan. When award-winning architect Gordon Bunshaft of engineering firm Skidmore, Owings & Merrill (SOM) was designing what would become a modernist marvel in the 1950s — a structure that traded sleek glass facades for the stone columns typically associated with banks — SOM worked with Spanish Metal Arts’s Bruno Saudino and Tony Vitale to furnish the property.

For Bruno and Tony, it marked the start of the aptly named Brueton — the pair produced understated side tables and seating made of glass and aluminum for SOM’s project. Revolutionary for its time, instead of traditional narrow windows, the Manufacturers Hanover Trust building was practically transparent — allowing passers-by to see the vault from the outside. (Celebrated photographer Ezra Stoller, who chronicled iconic New York buildings like Mies van der Rohe’s Seagram Building and the soaring silhouette of Eero Saarinen’s TWA Terminal, shot the building in 1954.)

Much like the material associated with so many of its offerings, Brueton built a reputation of being a strong, dependable and polished manufacturer. The brand worked with designers such as J. Wade Beam, who created cylindrical tables of polished chrome and exquisite marble mirrors during the 1970s, as well as Massimo and Lella Vignelli, a pair of innovative polymaths who ​​left a profound mark on design and wider visual culture.

1stDibs Buyer Protection Guaranteed
If your item arrives not as described, we’ll work with you and the seller to make it right. Learn More
About the Seller
5.0
Located in North Miami, FL
Platinum Seller
These expertly vetted sellers are 1stDibs' most experienced sellers and are rated highest by our customers.
Established in 2005
1stDibs seller since 2005
690 sales on 1stDibs
Typical response time: <1 hour
Associations
20th Century Specialists
More From This SellerView All
People Also Browsed
You May Also Like