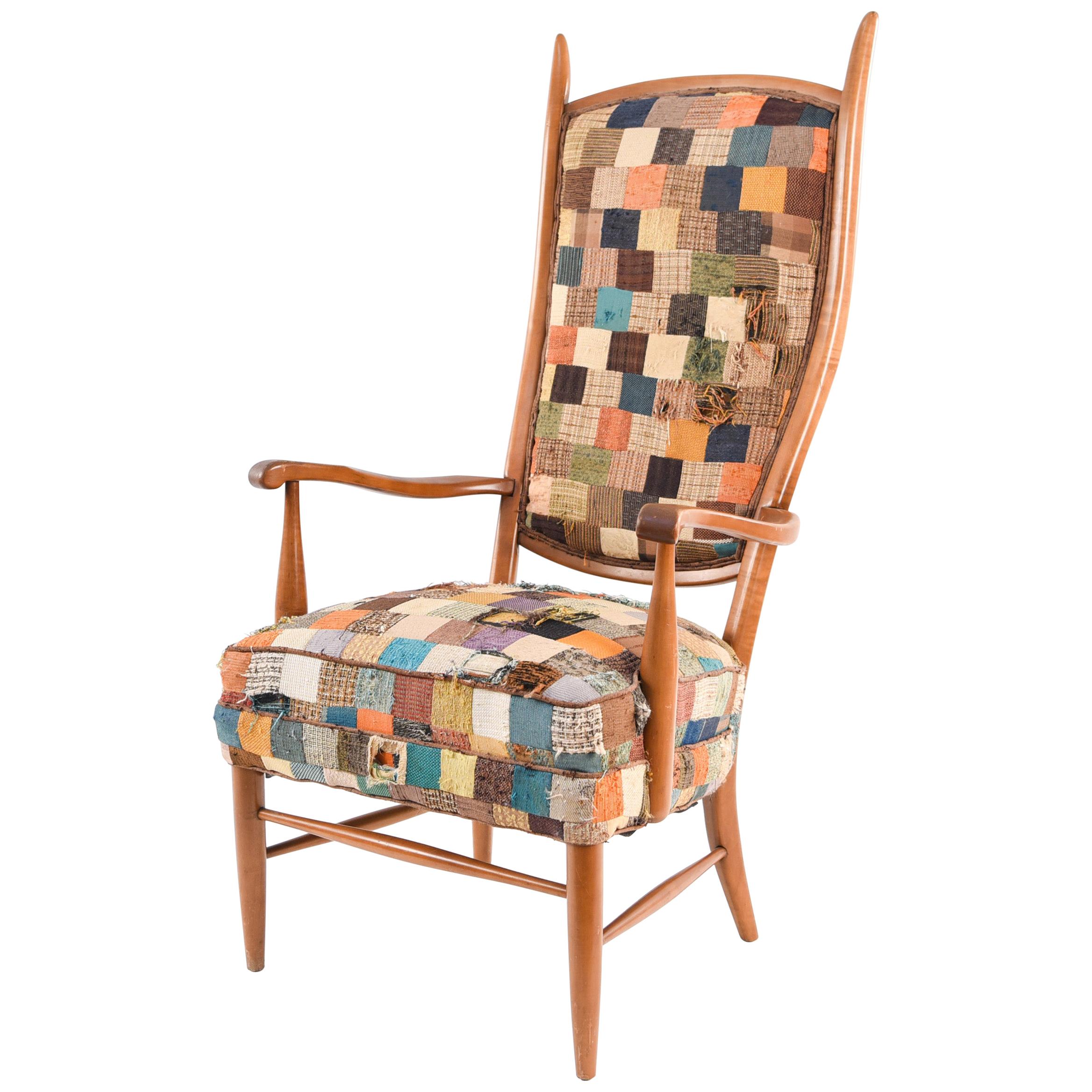 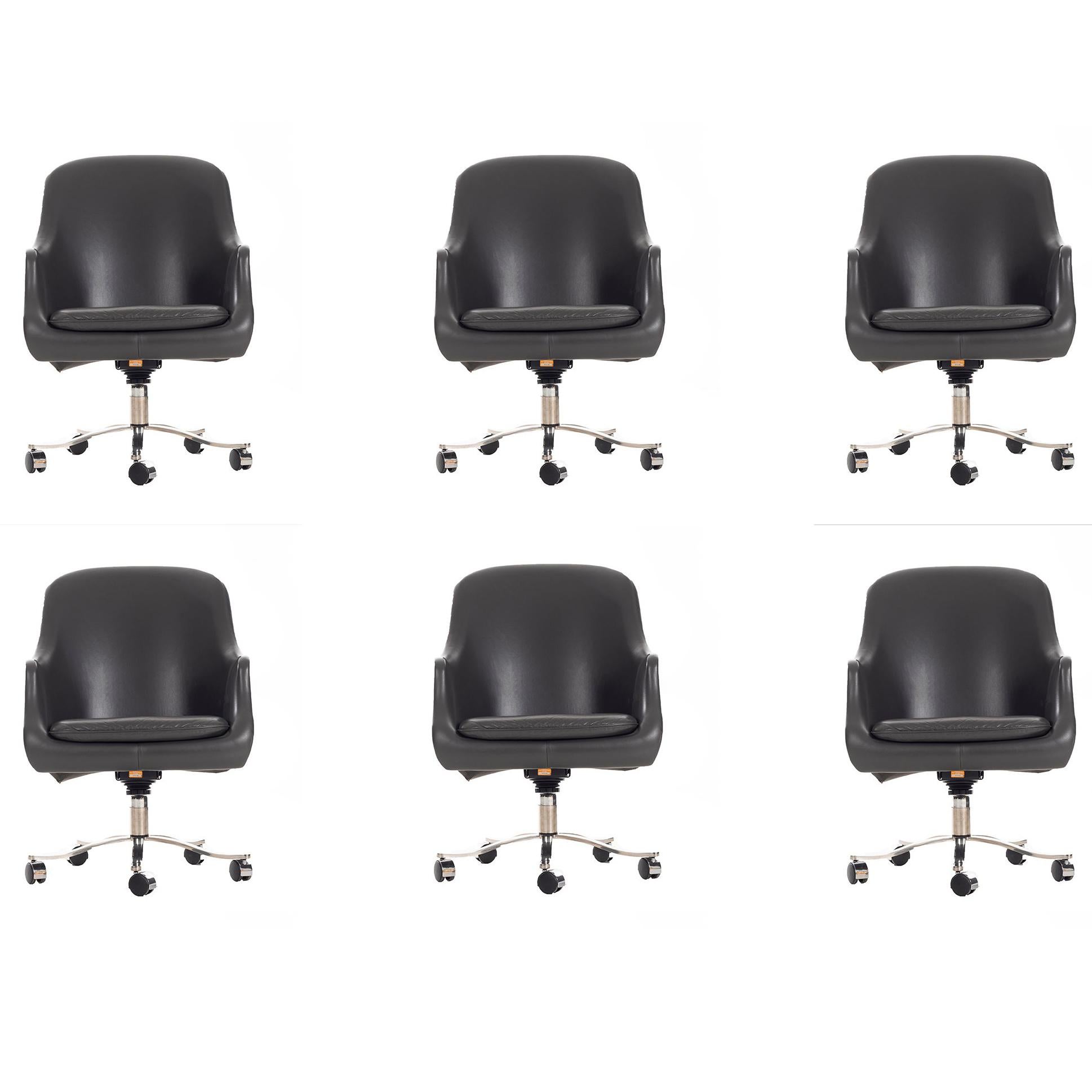 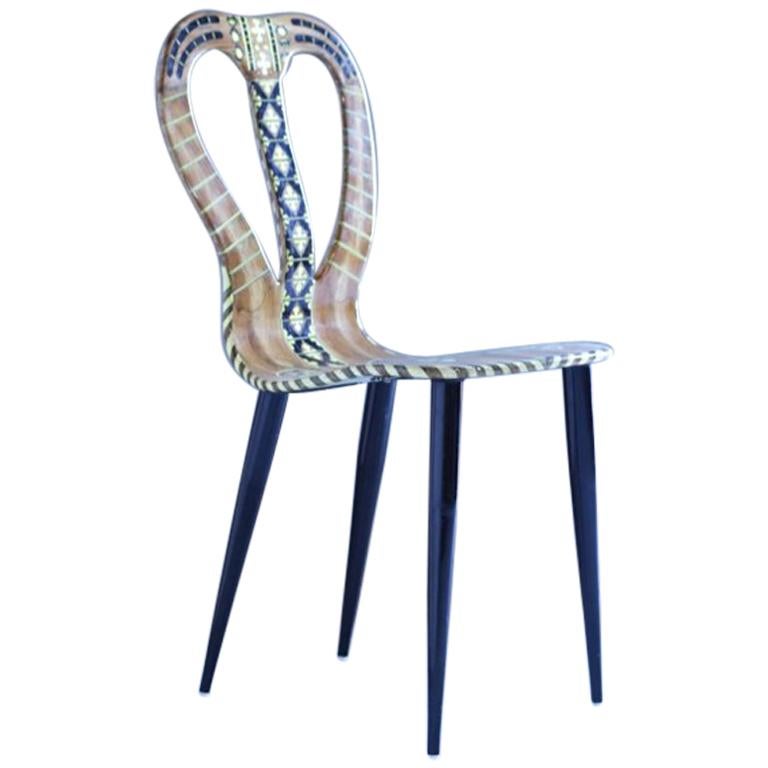 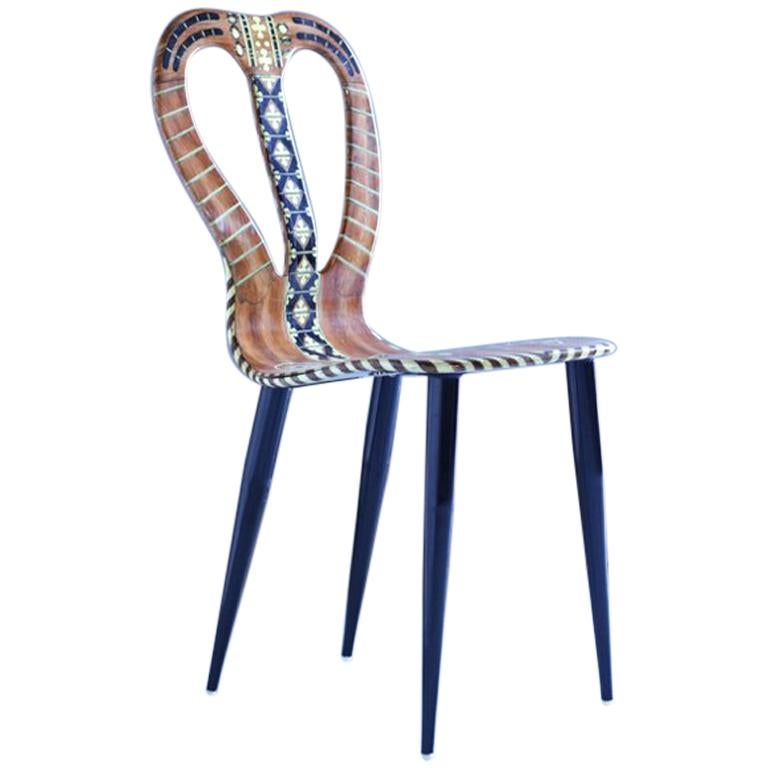 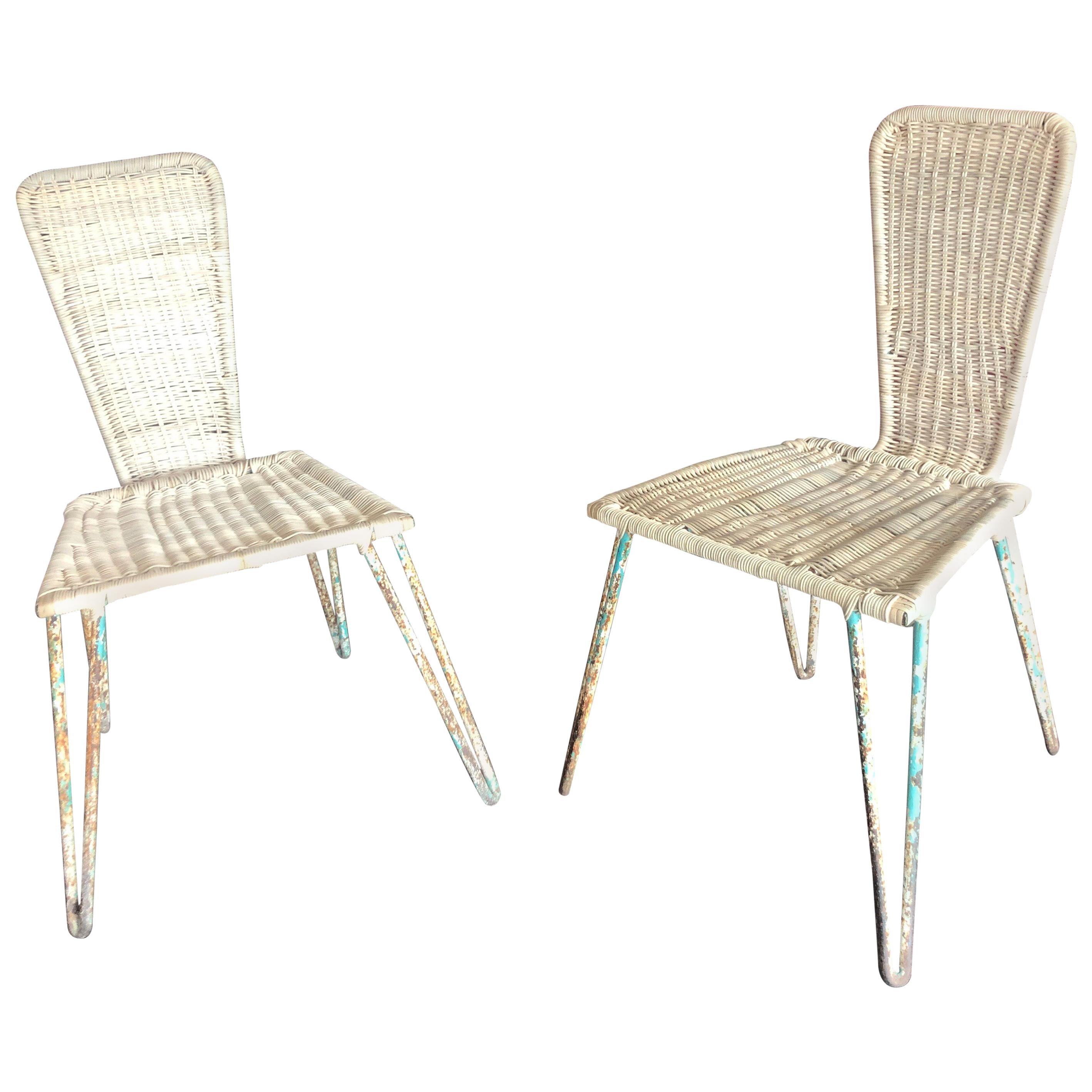 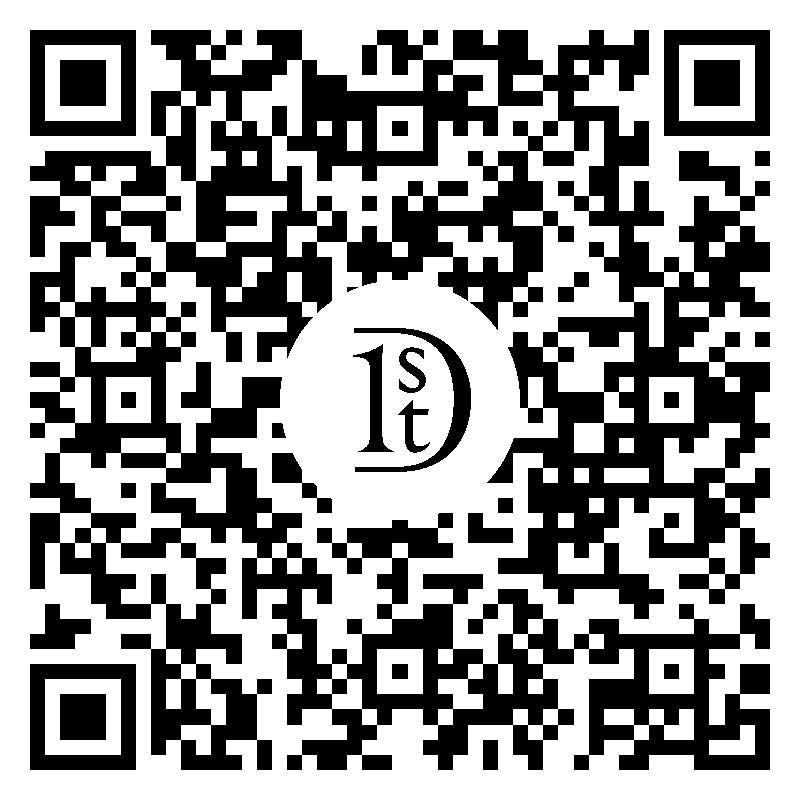 Measures: 28.5" tall, 15.25" wide, 18.5" deep with seat height of 16.5". Raymond Loewy for Arvin Furniture, Circa 1960's. This diminutive and petite chair is for use as a dining chair or bedroom vanity side chair. All original. Minor marks to black iron, white Naugahyde with no tears or rips. minimalist and stylish. 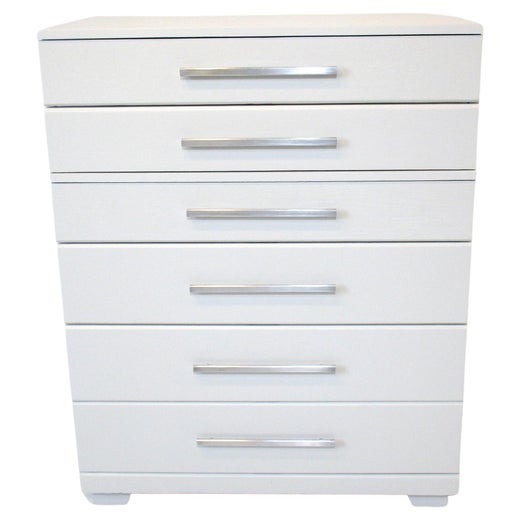 For those in the know, French-born American industrial designer Raymond Loewy is the “father of streamlining.” He is widely recognized as a pioneer of industrial design consulting — a creative powerhouse who took aim at cluttered designs and simplified them. Loewy left his mark on everything from toothbrushes to trashcans to spacecraft interiors. He designed cars, worked in illustration, and crafted comely dressers and other furniture.

Loewy was born in Paris, France. At age 15, he designed a model airplane that was powered by rubber bands. It won the James Gordon Bennett Cup of 1908. Loewy patented the model kit for this plane by the following year and saw brisk sales. With his savings, Loewy was able to study at the University of Paris and then at Ecole de Lanneau, where he earned an engineering degree in 1918.

Loewy moved to New York City in 1919 and found work as a window designer for the department stores Macy's, Wanamaker's and Saks and as a fashion illustrator for Vogue and Harper's Bazaar. Loewy’s big break in industrial design came in 1929 when he altered the Gestetner duplicating machine — removing jutting parts and encasing the moving works in an understated cover. It caused a sensation within the industry — and companies began to call on him.

Loewy designed packaging for Coca-Cola and revised the look of Lucky cigarettes. The “Loewy Look,” which referred to the designer’s efforts to strip a product of any unnecessary detail and streamline its appearance, began to characterize hundreds of products.

Loewy found clients in a dizzying number of companies. He did everything from retooling logos to redesigning products. His 1934 Sears Coldspot refrigerator was a sleek innovation that broke sales records. His Pennsylvania Railroad locomotive resembled a speeding bullet and was the darling of the 1939 World’s Fair. Loewy even reworked shapes for snacks at Nabisco. By the time World War II gathered steam, Raymond Loewy Associates — the industrial design firm he founded — had been operating in a number of American cities. When Time magazine featured him on the cover in October 1949 — Loewy was not shy about publicity — his profile soared.

Loewy worked with Studebaker for decades. The success of their 1953 Starliner coupe was due to his revolutionary design, while their 1963 futuristic, fiberglass-bodied Avanti, which came with advanced safety features and materialized at a time when the company was experiencing financial hardship, was his crowning achievement for the maker.

Returning to his roots in aviation, Loewy worked for NASA from 1967 to 1973 on the interior design of the Skylab space station. He was also involved in the interior designs of the Concorde supersonic jet and Air Force One. Loewy delighted in creating furniture and collaborated with manufacturers such as Mengel Furniture, Rosenthal and Doubinsky Frères. In the 1970s, Loewy and his wife shuttered their businesses and retired in France.

About the Seller
5.0
Located in South Charleston, WV
Platinum Seller
These expertly vetted sellers are 1stDibs' most experienced sellers and are rated highest by our customers.
Established in 2013
1stDibs seller since 2015
332 sales on 1stDibs
Typical response time: <1 hour
More From This Seller

$1,900 Sale Price / set
20% Off
CENTURY Chin Hua by Raymond Sobota Black Lacquer Side Chair
By Century Furniture
Located in Charlotte, NC
An Asian style side chair by high-quality furniture maker century. From their "Chin Hua" line designed by Raymond K Sobota. Made in the 1970s in Hickory, North Carolina, USA. Made fr...
Category

$1,275
8 Space Age Swivel Dining Chairs, Cast Aluminum Tulips Base and New Upholstery
By Eero Saarinen, Raymond Loewy
Located in bergen op zoom, NL
Fabulous set of 8 fresh upholstered swivelling dining chairs with memory position Unfortunately we can not find the manufacturer or designer of these chairs but they are of very hi...
Category

$12,000 / set
Chin Hua Raymond Sabota Asian Dining Chairs by Century Furniture -Set of 6
By Century Furniture
Located in Lake Worth, FL
For FULL item description be sure to click on CONTINUE READING at the bottom of this listing. Offering One Of Our Recent Palm Beach Estate Fine Furniture Acquisitions Of A Set of ...
Category