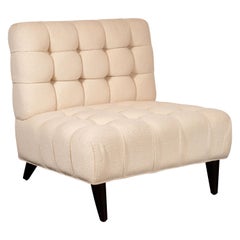 Hollywood Regency Slipper Chairs in the Style of Billy Haines 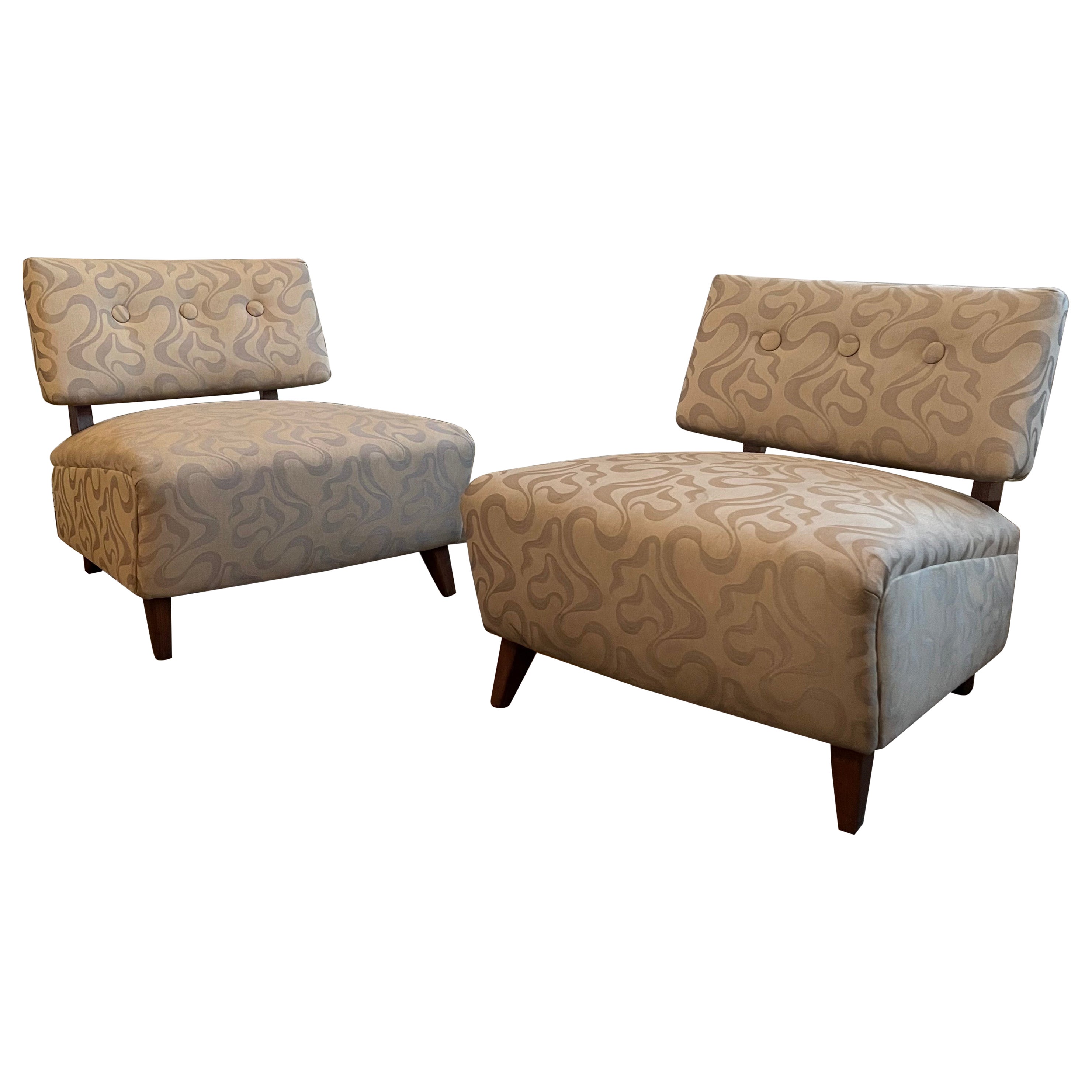 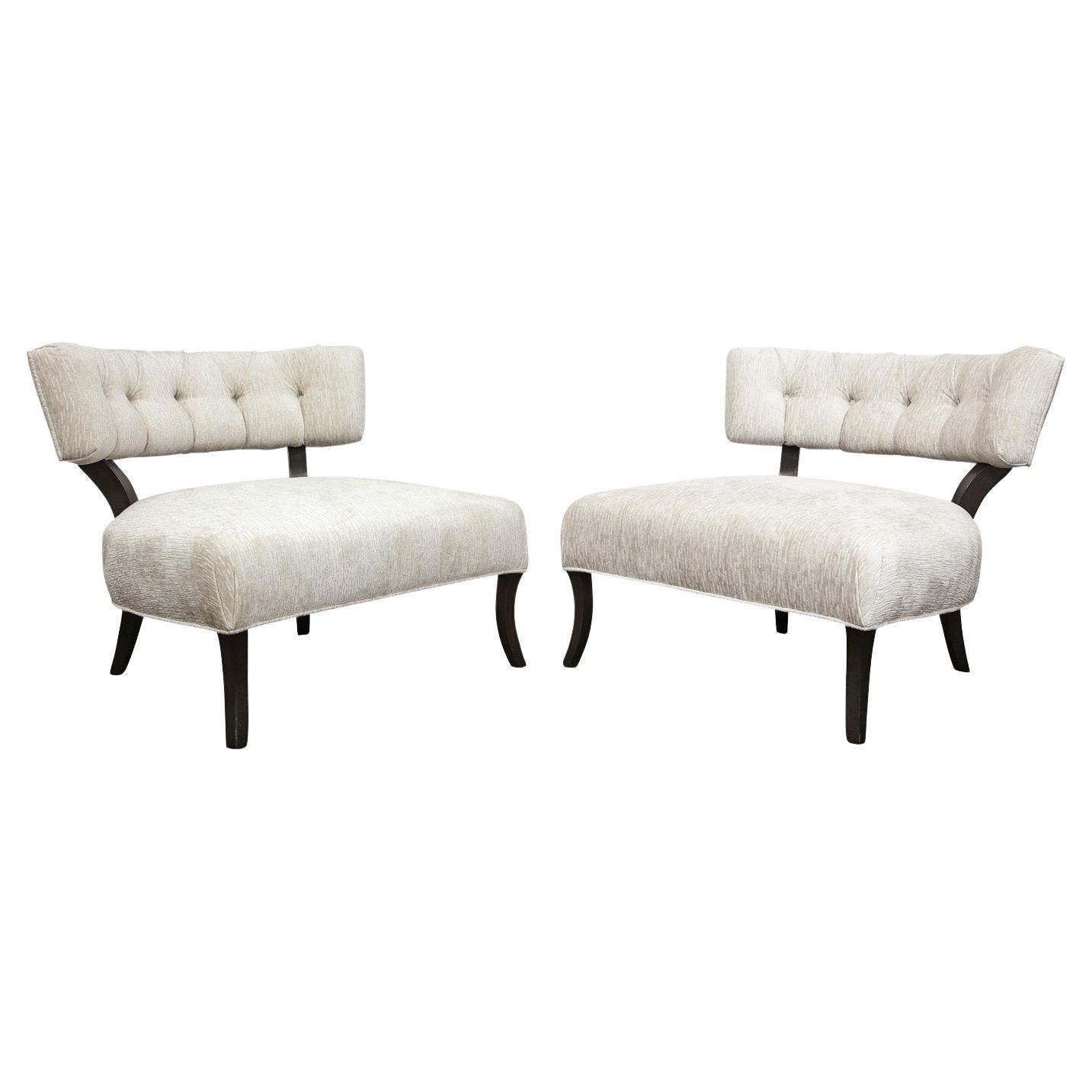 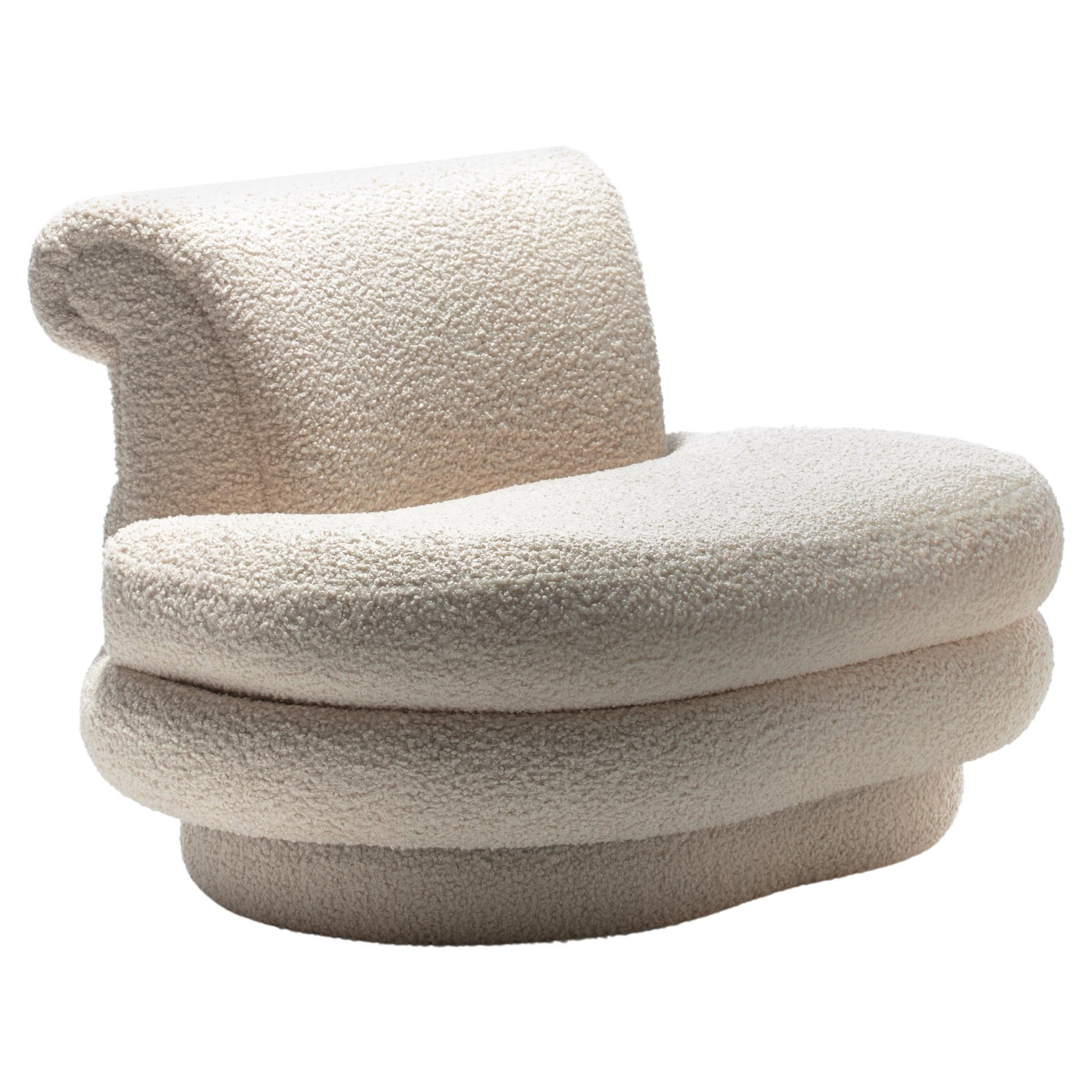 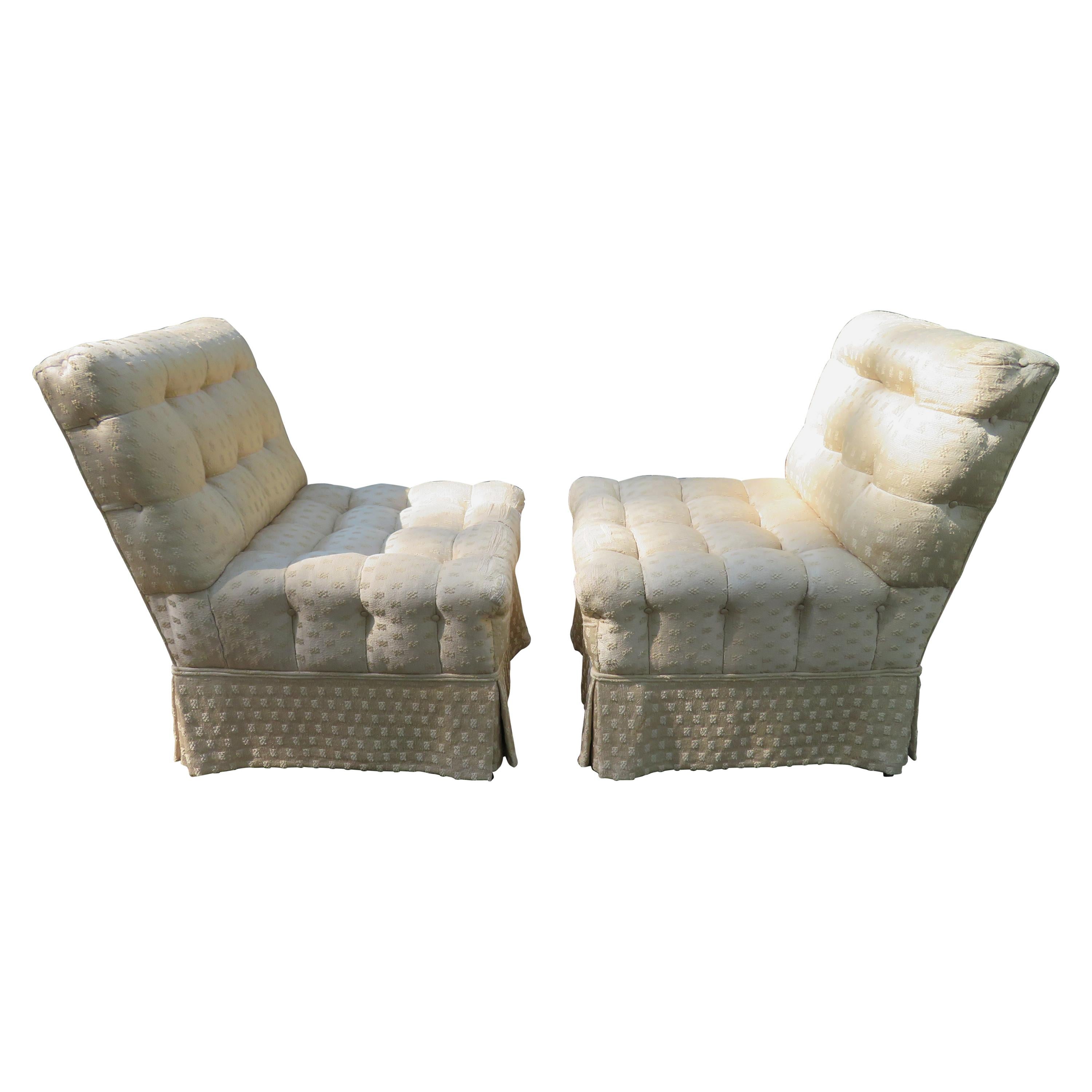 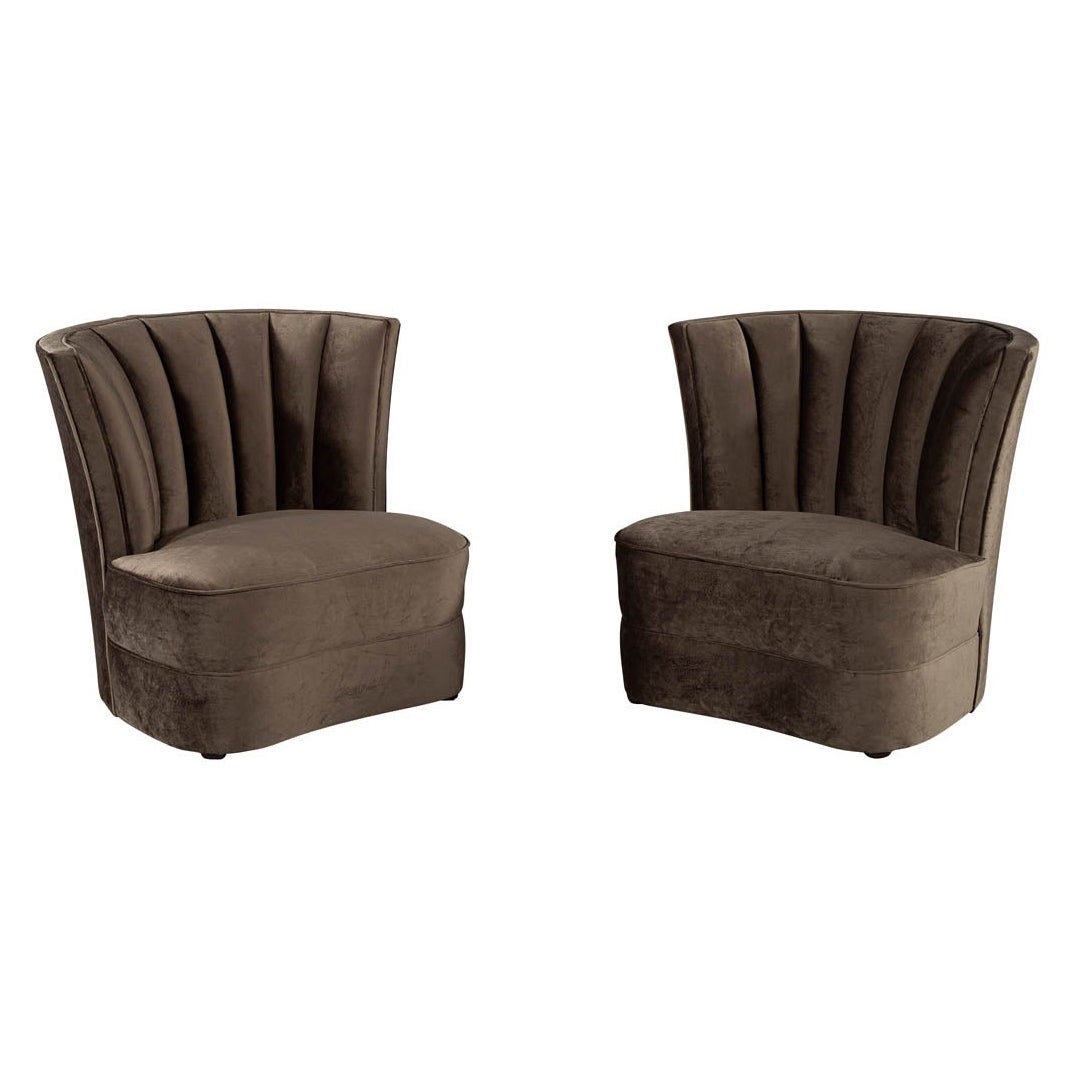 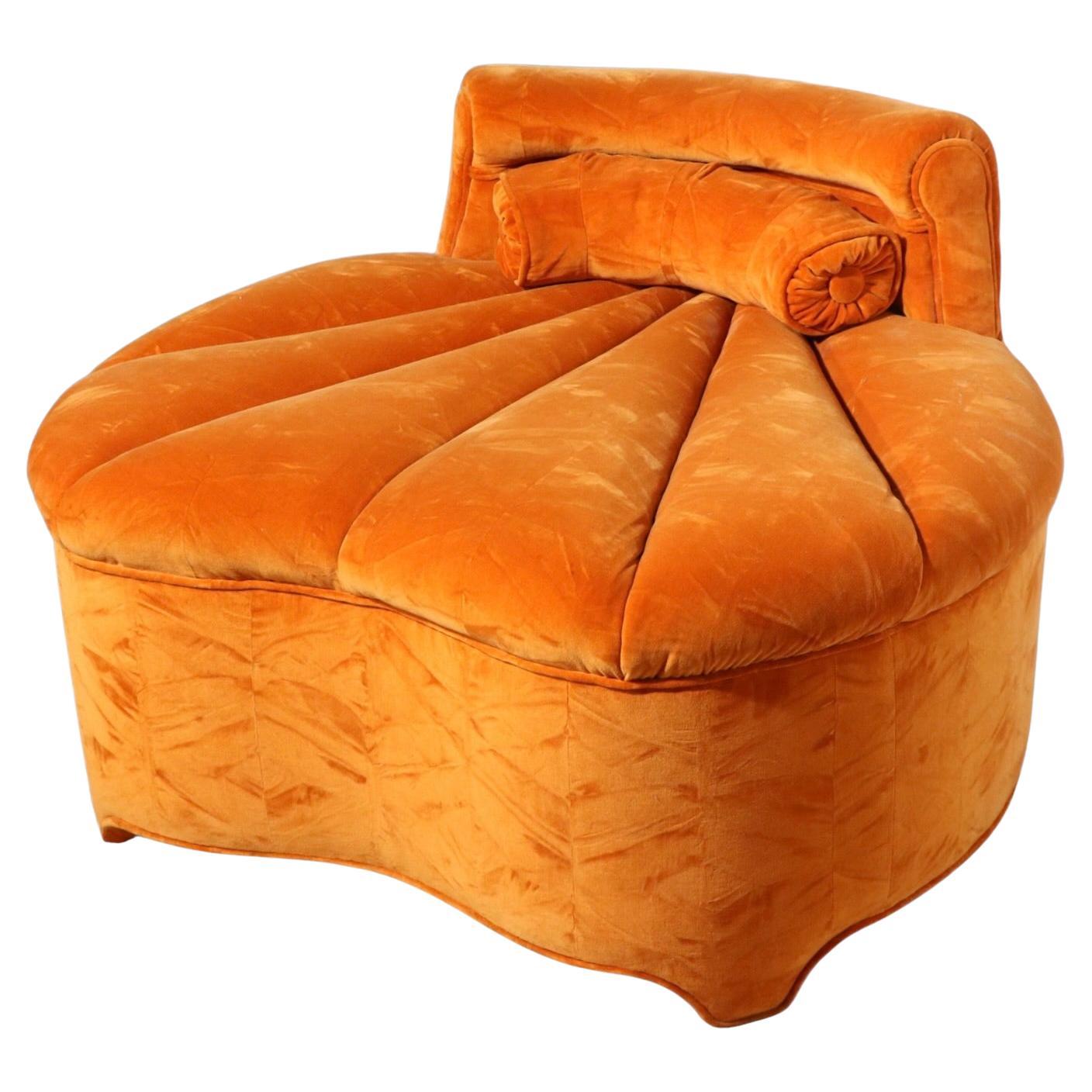 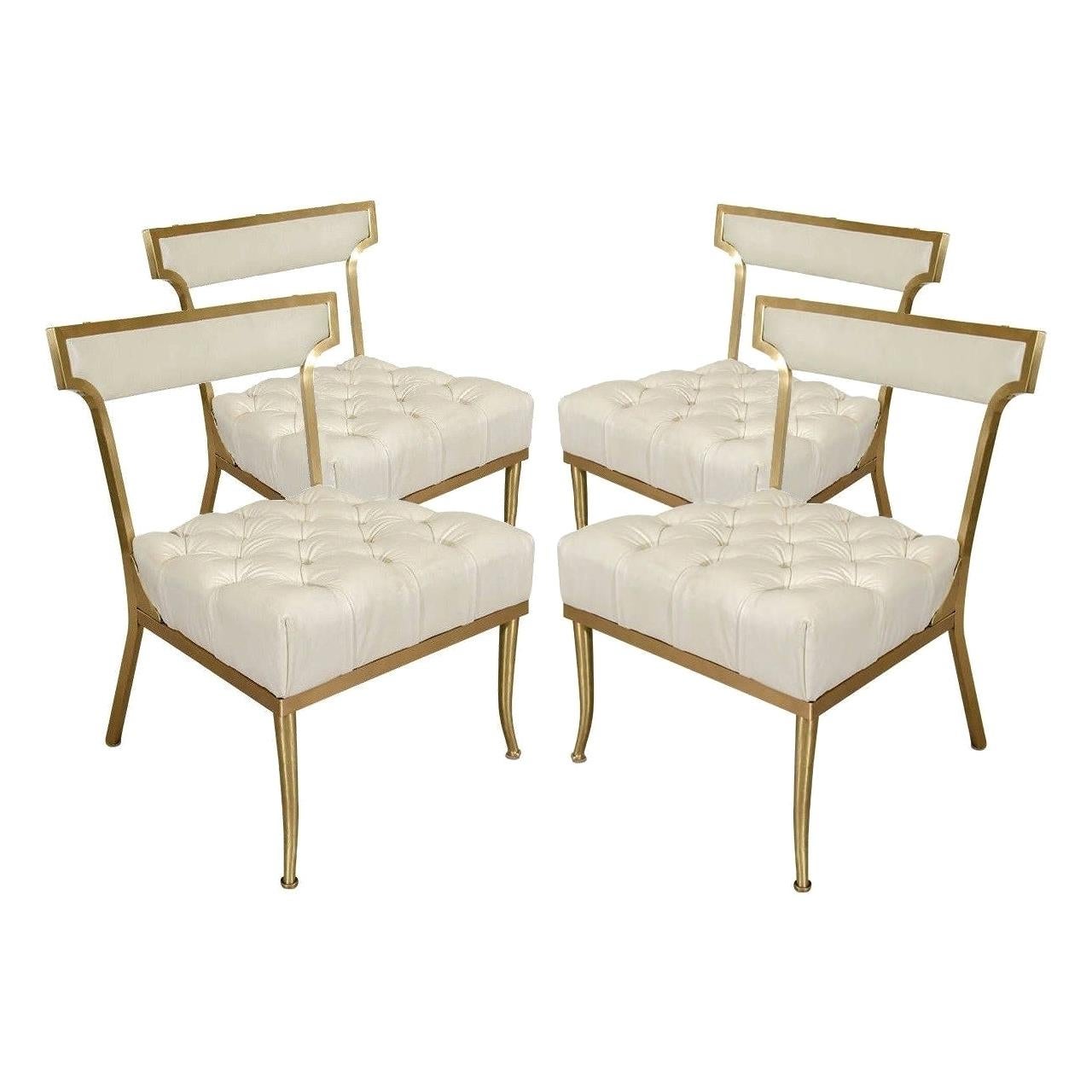 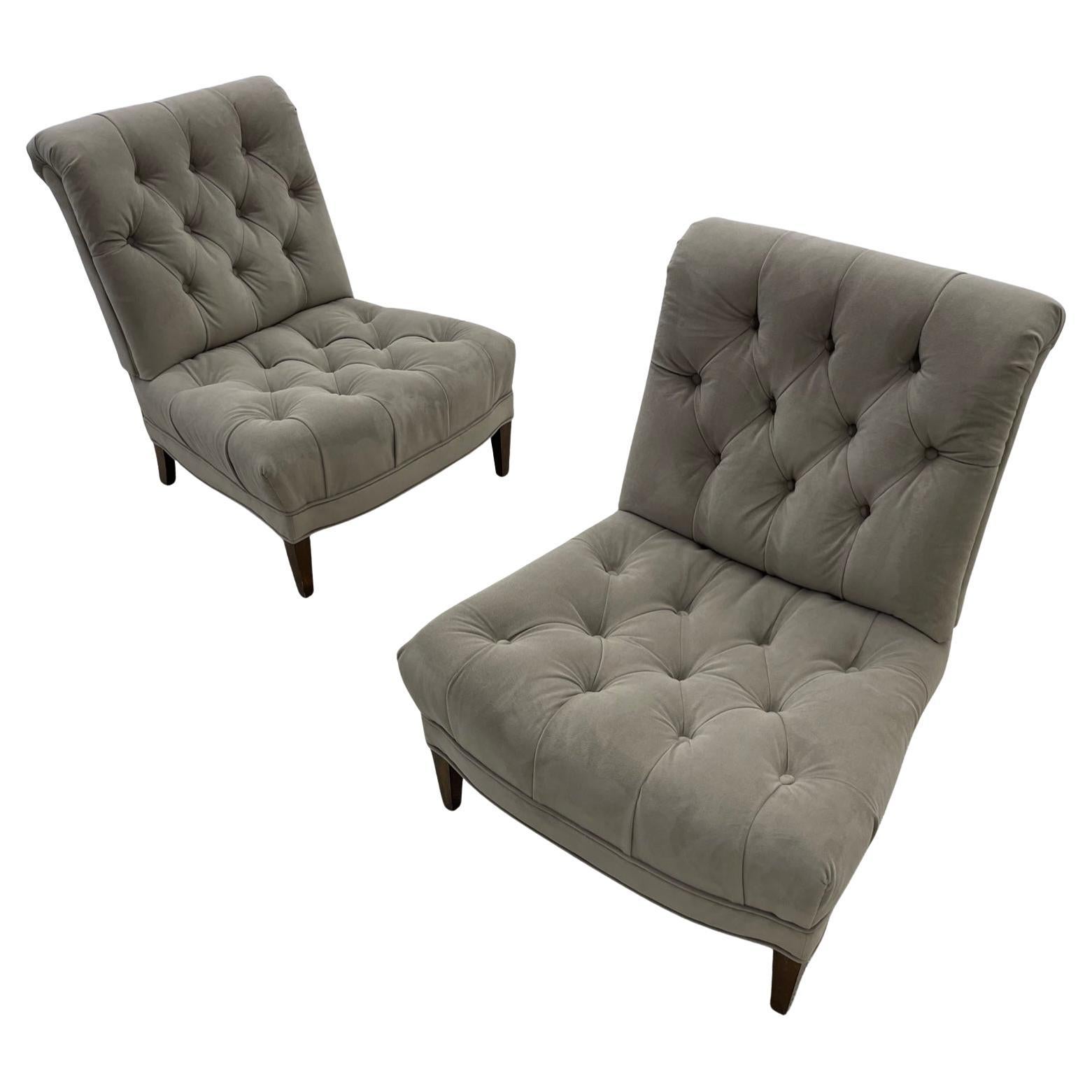 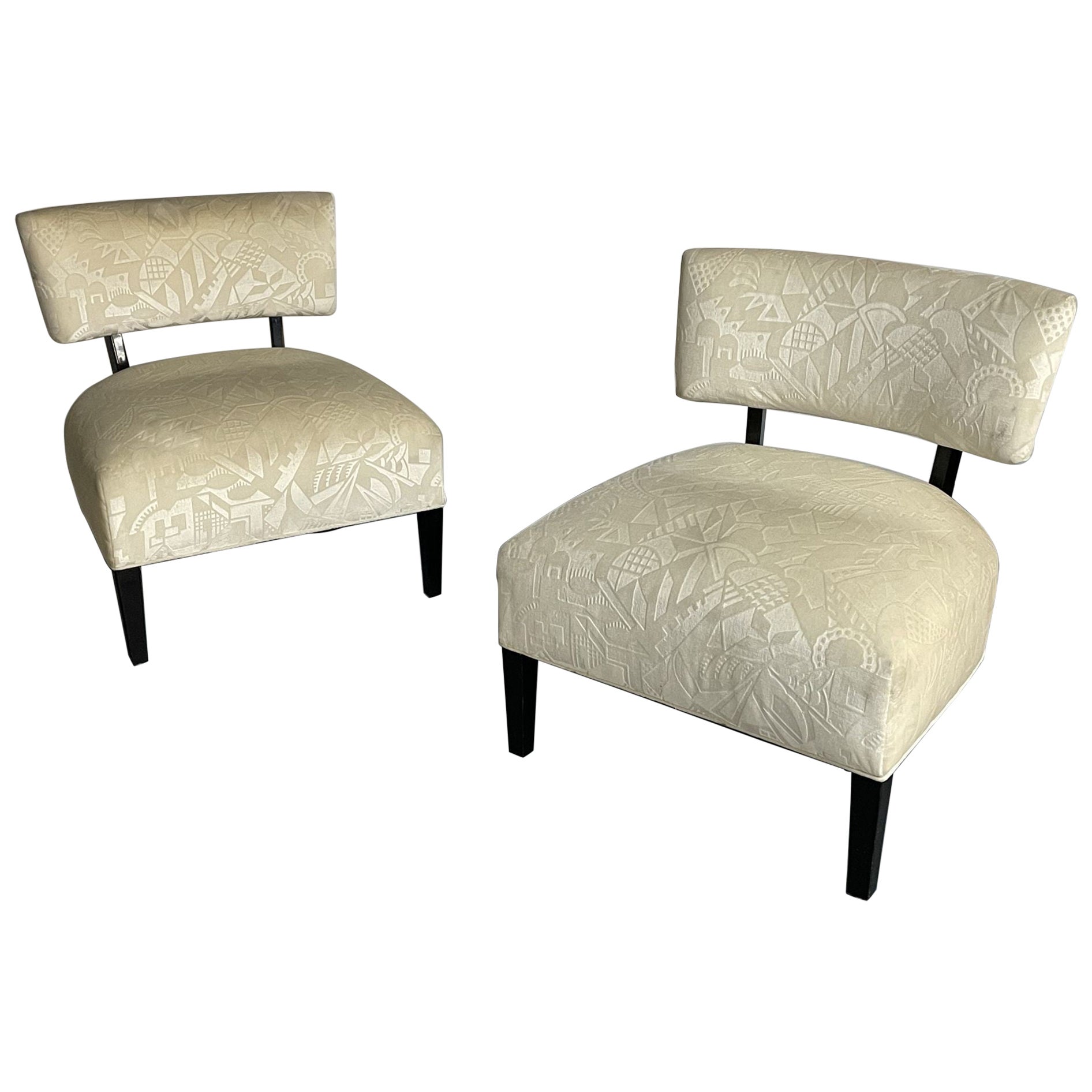 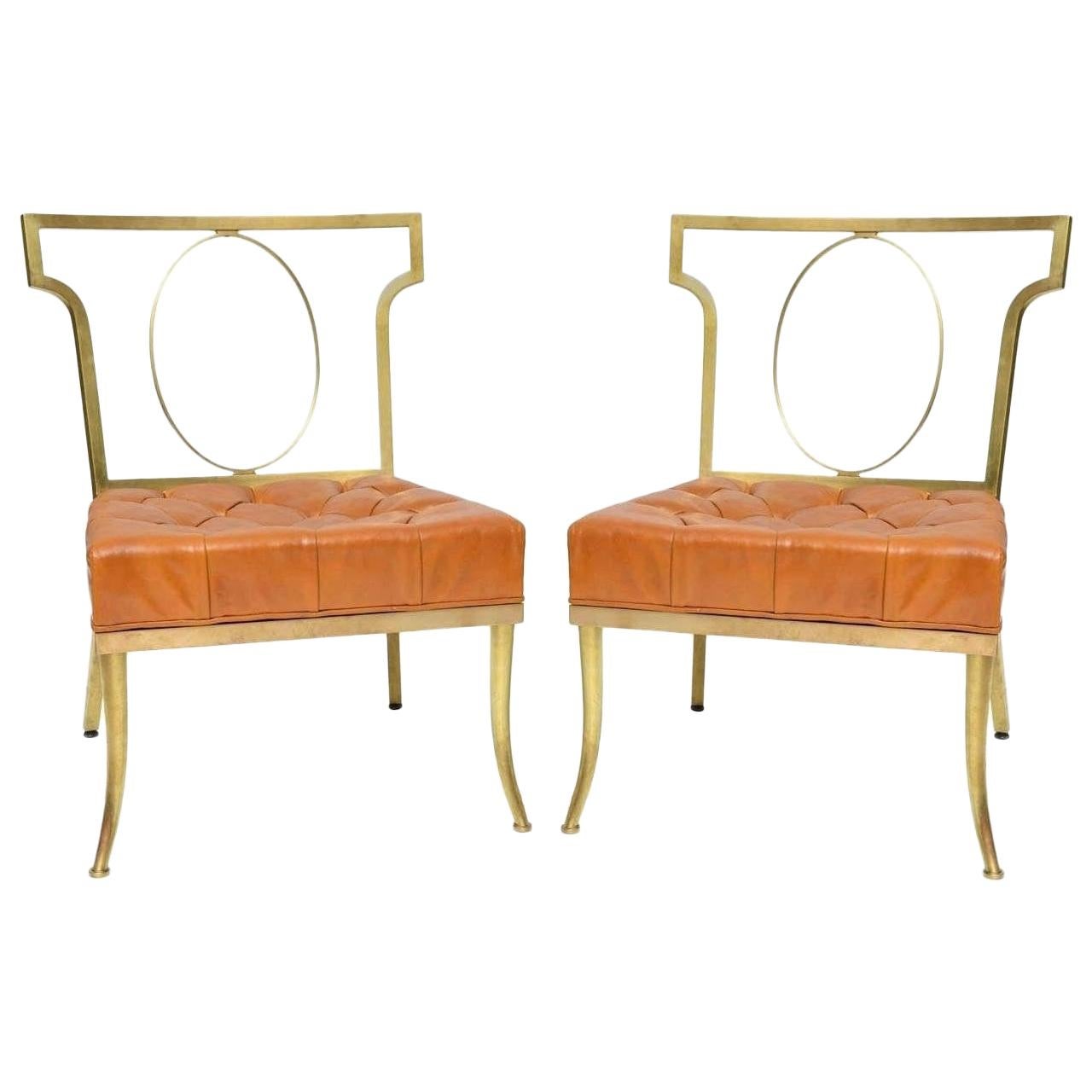 Pair of Elegant Slipper Chairs in the Manner of Billy Haines 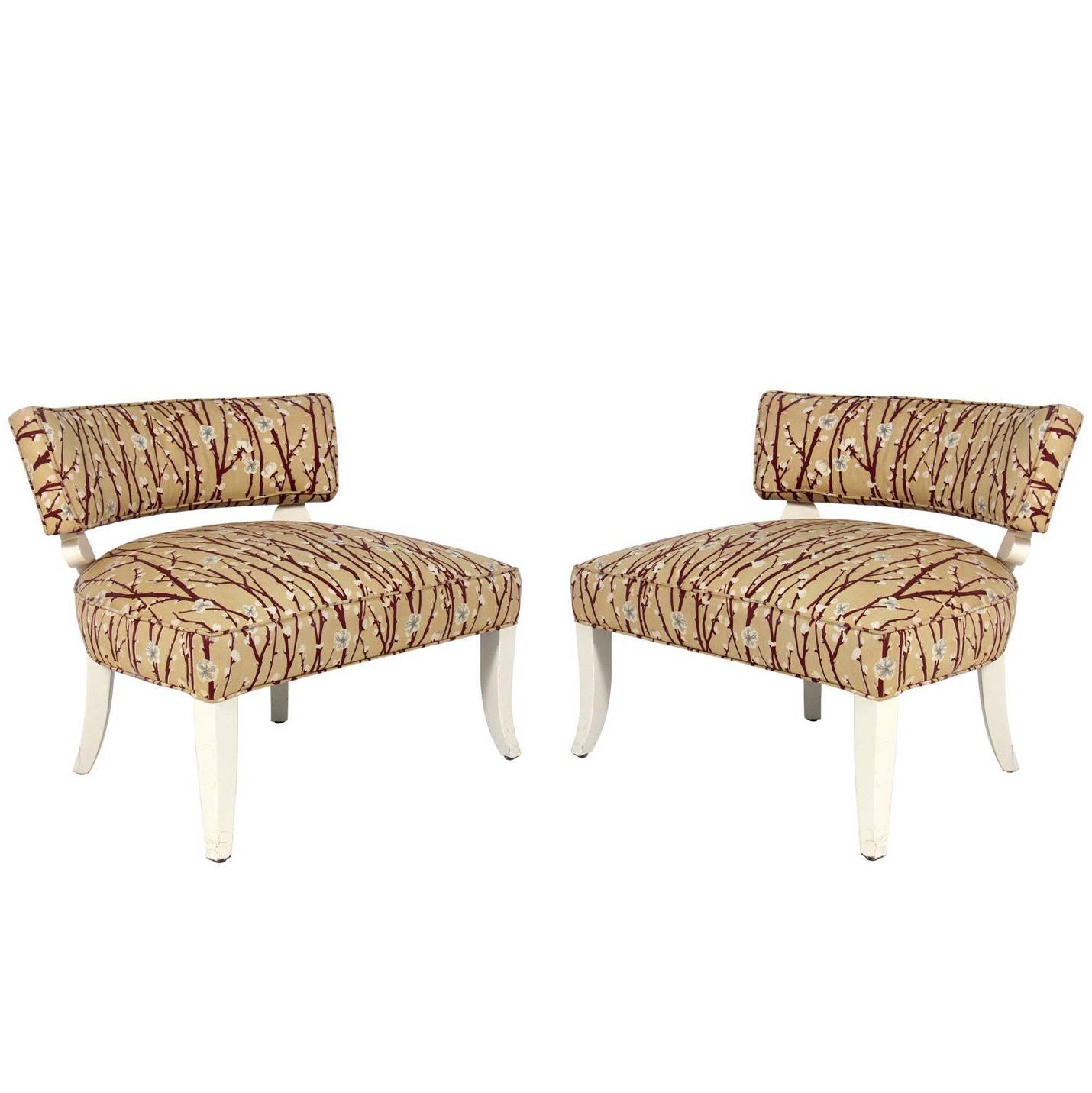 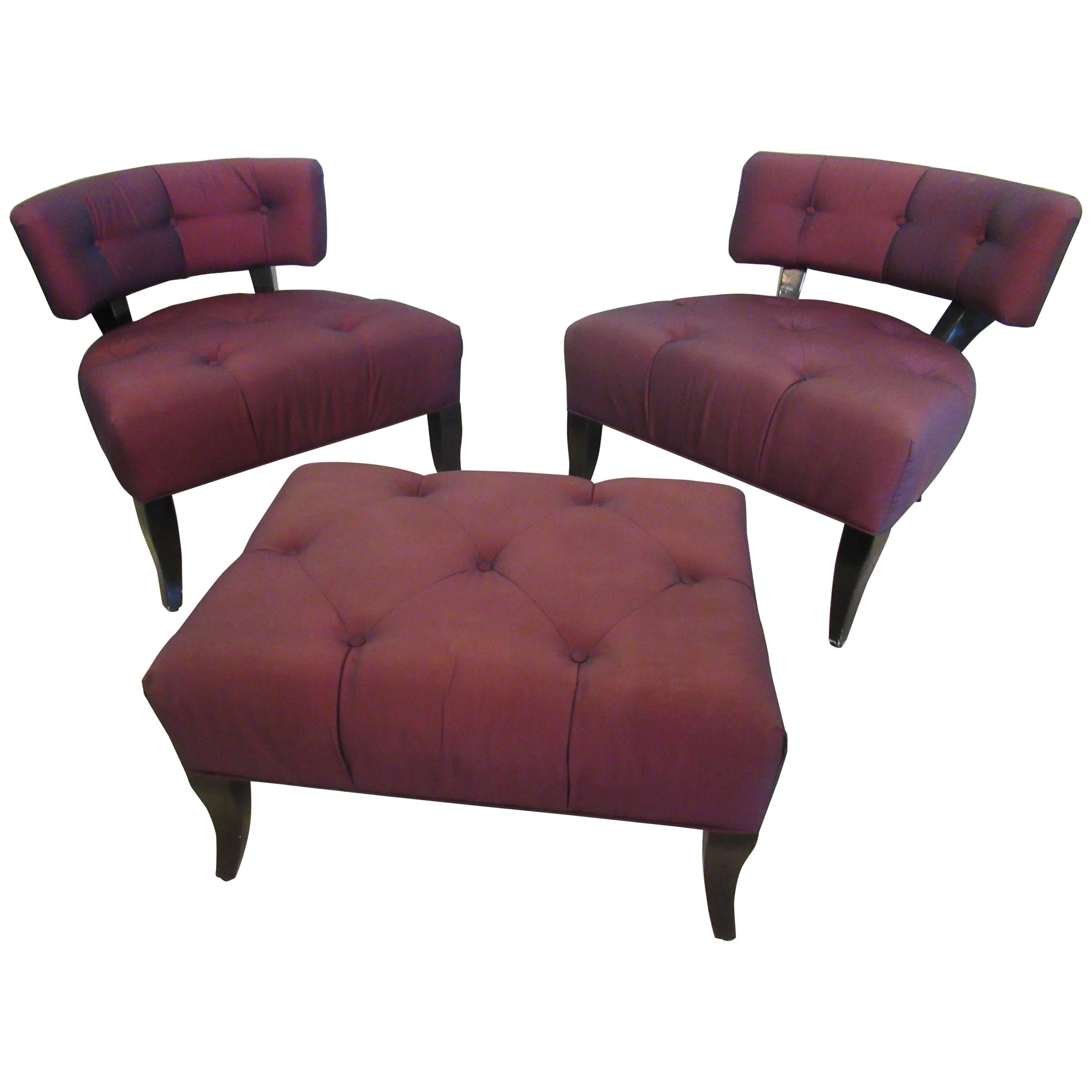 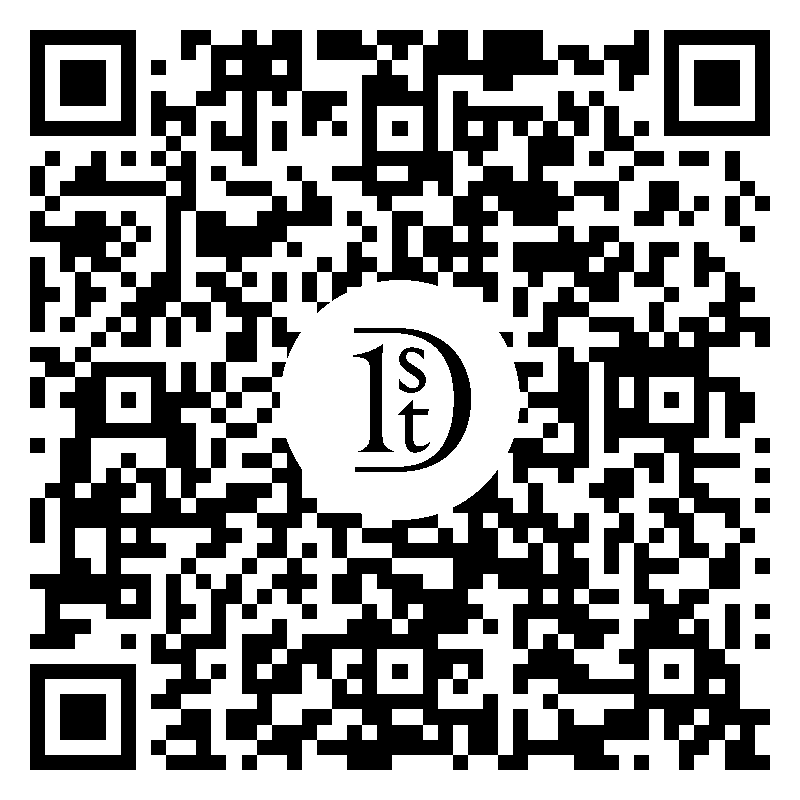 Designed by Billy Haines in the 1950s, this elegant lounge chair exemplifies the "restrained modernism" for which Haines is renowned. Sitting on conical legs in ebonized walnut, this chair features an abundance of subtly convex square tufts separated by channel detailing. With its clean, modernist lines and timelessly elegant aesthetic- as contemporary looking today as when it was envisioned more than 60 years ago- this piece would be a winning addition to any style of interior from Art Deco (or Hollywood Regency) to contemporary. It has been newly reupholstered in a textural cream bouclé fabric and is in excellent condition. American, 20th century Dimensions: 31.5" W x 31.5" D x 32.5" H Seat height: 16.5". 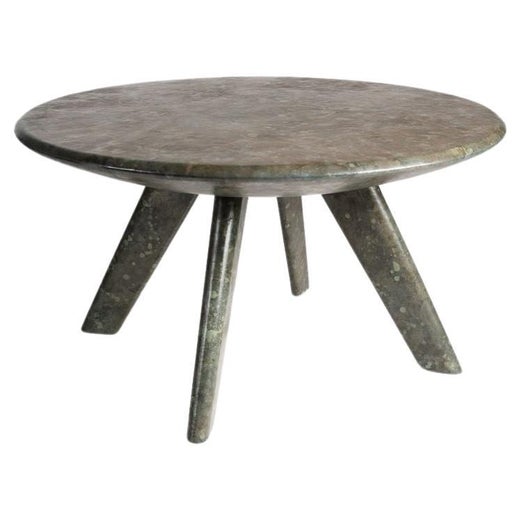 Plenty of prolific designers started off on slightly different tracks than those on which they ended up, but rarely did they begin their careers in a totally separate industry like William “Billy” Haines did. Before he gained a reputation as a furniture designer and decorator to Hollywood’s biggest and brightest, Haines was himself a star of the silver screen.

Luckily for Haines, he had nurtured a side career that kept him on Hollywood’s radar: He was a prominent antiques dealer on La Brea Avenue in Los Angeles. Haines dedicated himself full-time to both dealing and designing furniture as soon as his tenure as a leading man came to an end.

Haines collaborated with the era’s biggest names in architecture and created a desert living room for the 1939 Golden Gate International Exposition in San Francisco that featured walls made of California Joshua wood and a painting by Georgia O’ Keeffe. He paid close attention to lighting design, employed hand-painted wallpaper and favored featuring Chinese ceramics alongside Chippendale chairs and ottomans for entertaining. His most famous clients included Joan Crawford, Carole Lombard, Betsy Bloomingdale and more. Crawford played a significant role in kick-starting his career when she commissioned Haines to decorate her entire home in Brentwood.

Haines was such an esteemed tastemaker that he’s among those credited with having cemented Hollywood Regency as a reputable design style. (Its origins are owed to influential interior decorator Dorothy Draper.) While he gravitated toward the look of chinoiserie and English furniture, his signature was low-level seating and giltwood accents. Haines’s interior design style was so in vogue that Nancy Reagan became one of his biggest fans and eventually enlisted Ted Graber, Haines’s successor following his death in 1973, to decorate several private and public rooms in the White House.

Find a collection of vintage William Haines lounge chairs, lighting fixtures and other furniture on 1stDibs.

About the Seller
5.0
Located in New York, NY
Platinum Seller
These expertly vetted sellers are 1stDibs' most experienced sellers and are rated highest by our customers.
Established in 2003
1stDibs seller since 2004
1,810 sales on 1stDibs
Typical response time: <1 hour
More From This SellerView All
You May Also Like