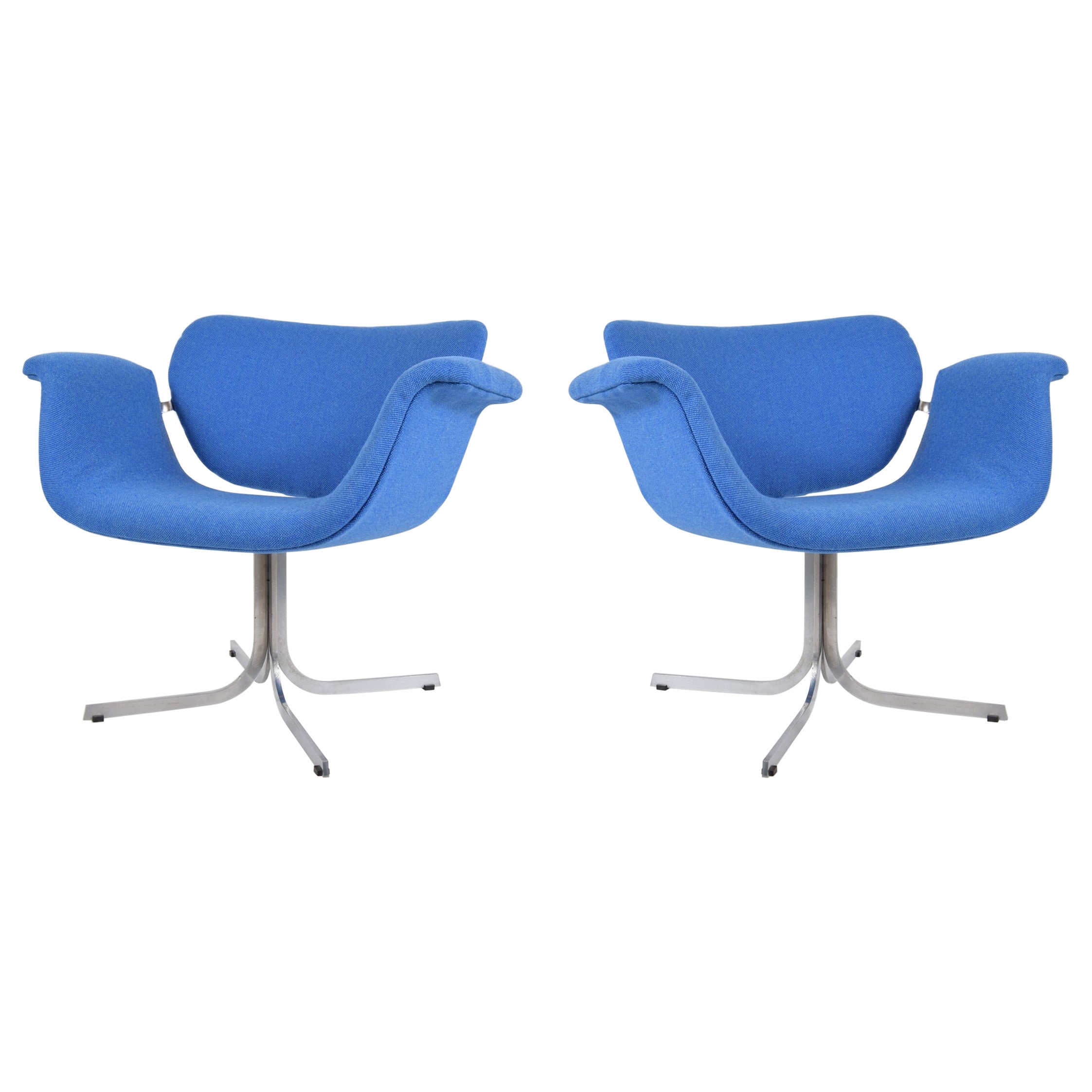 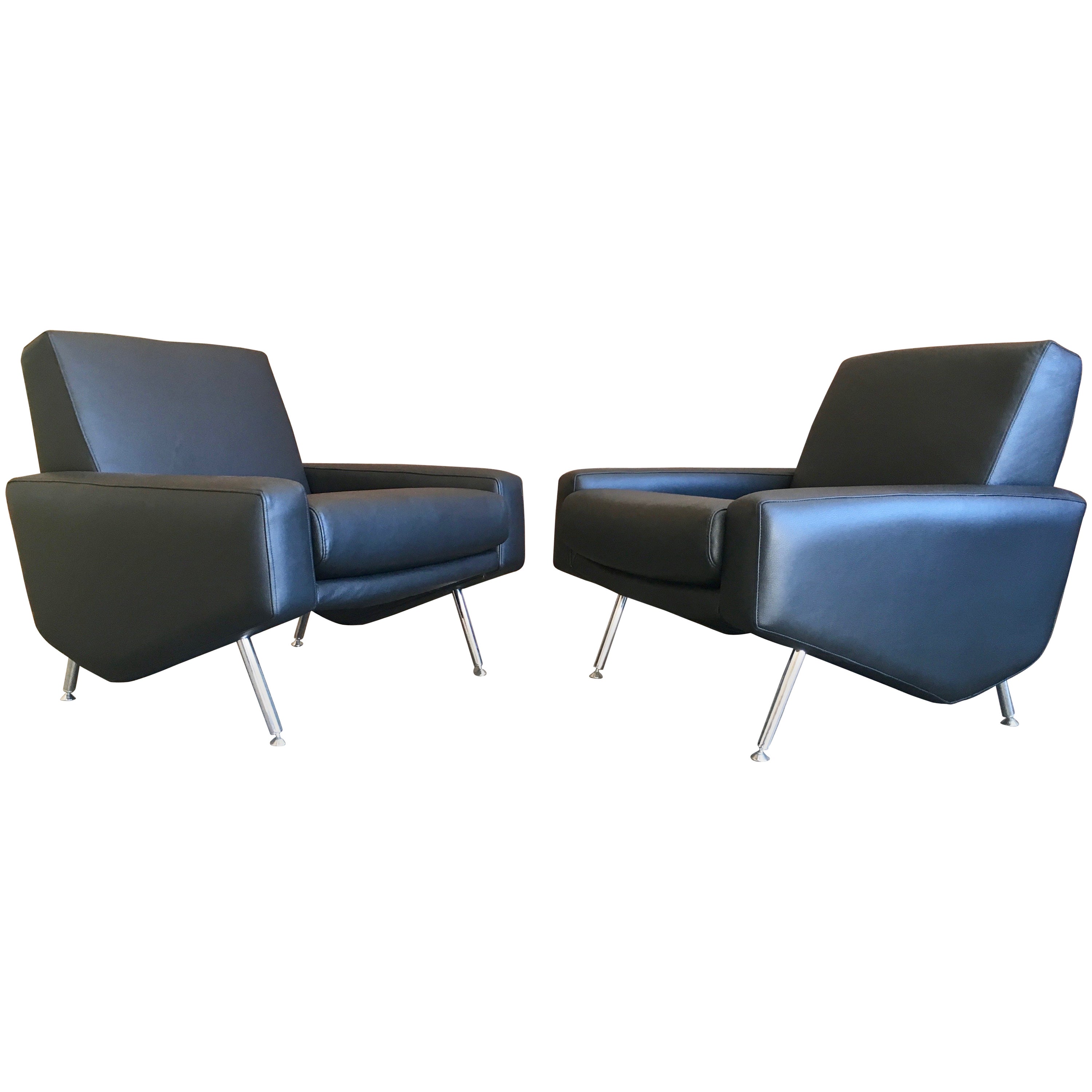 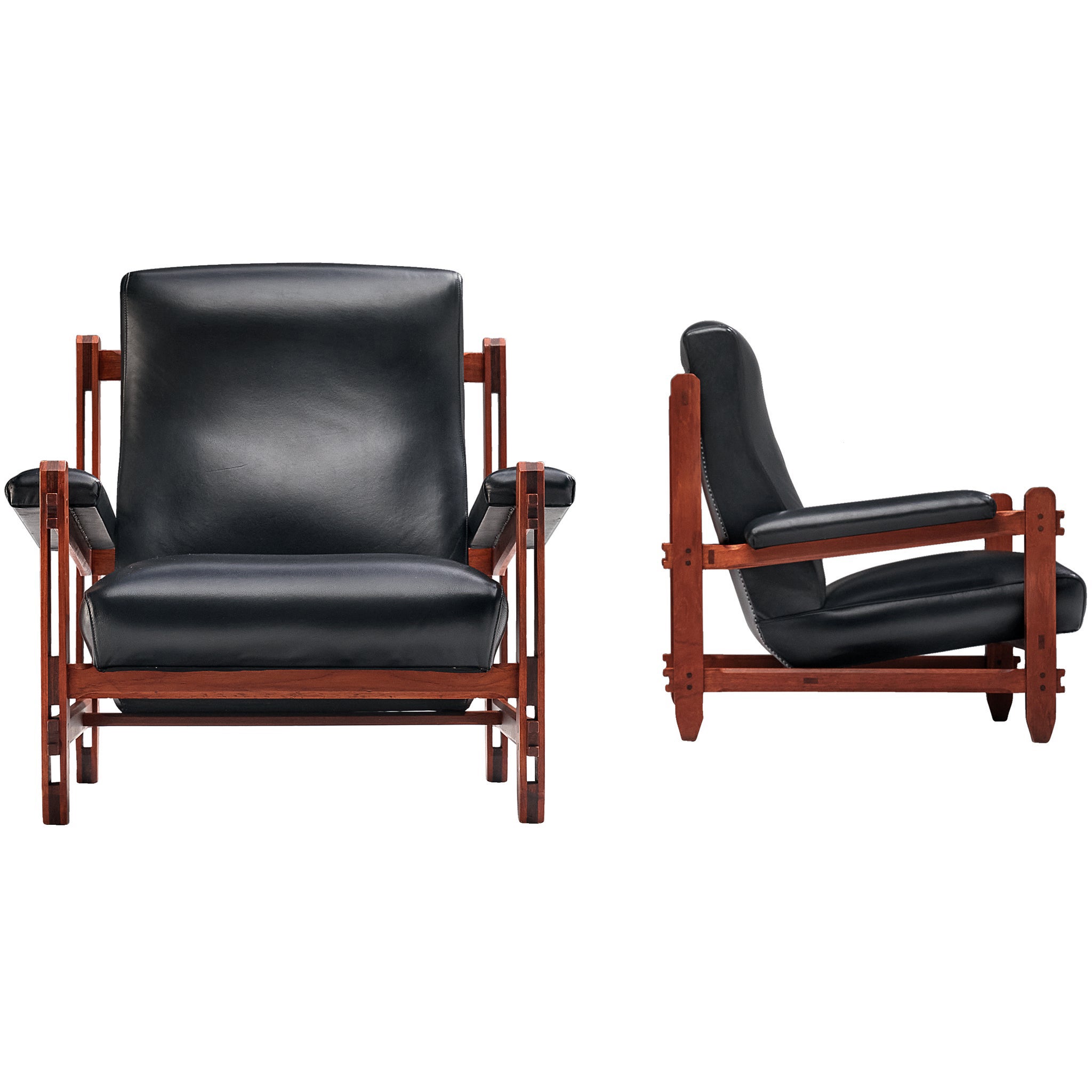 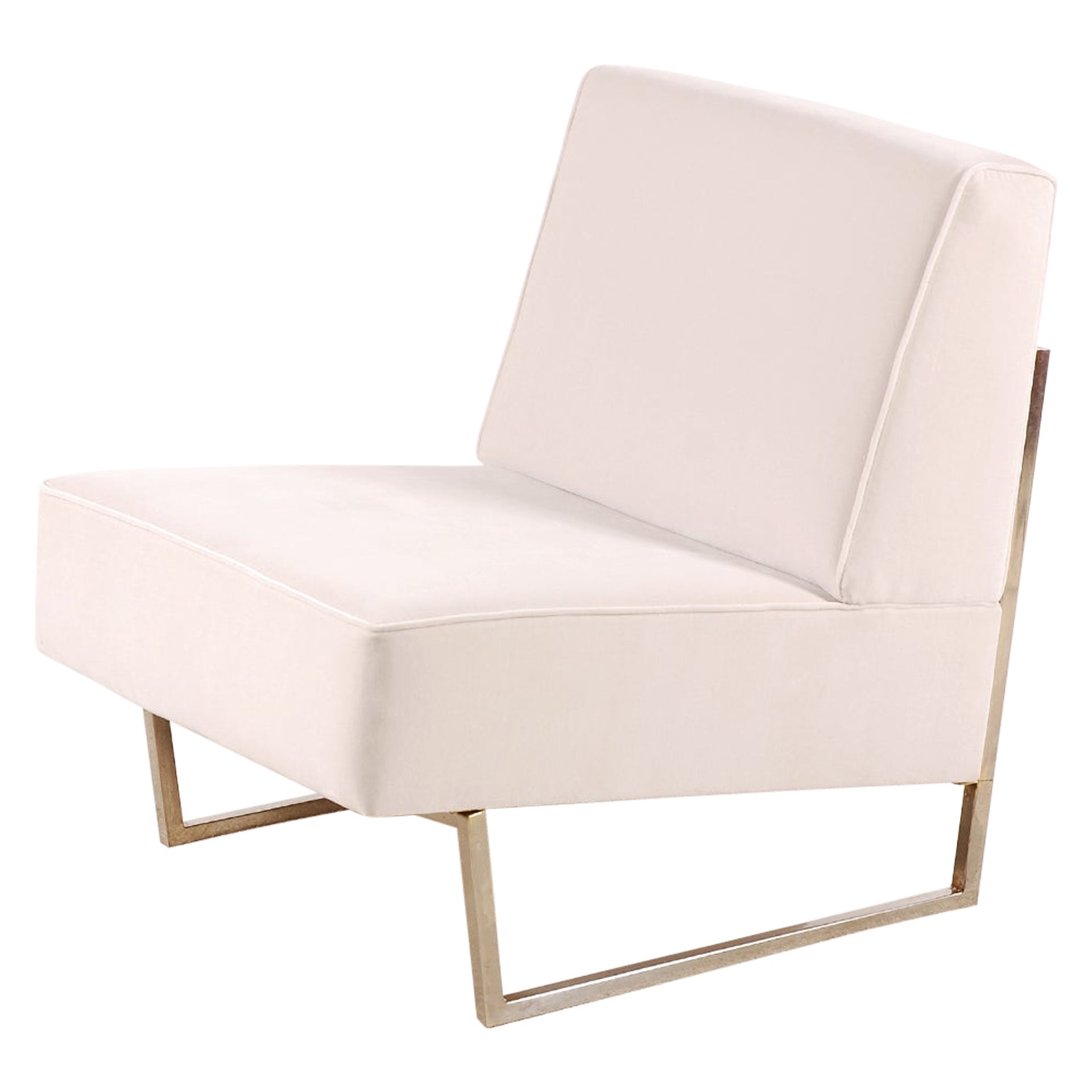 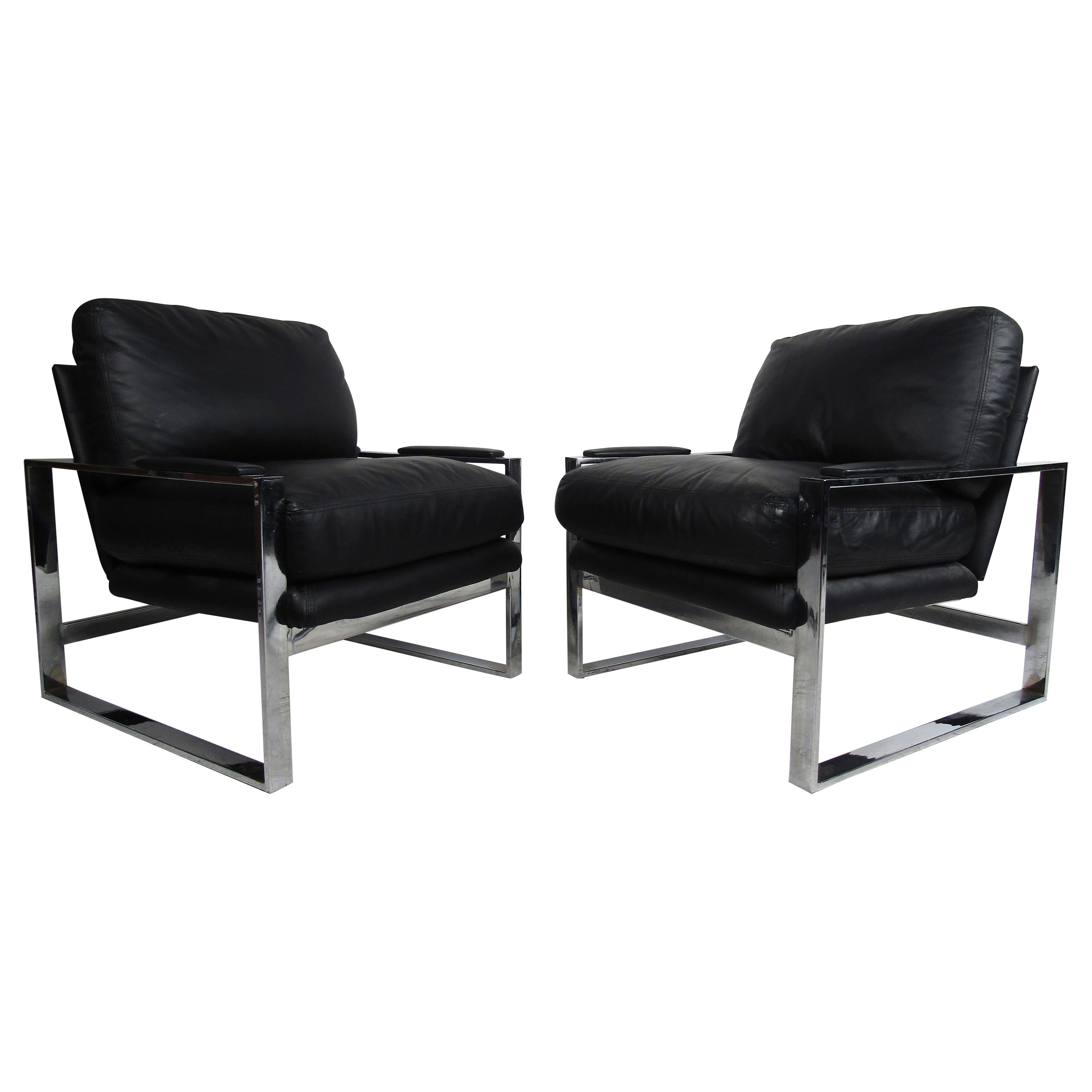 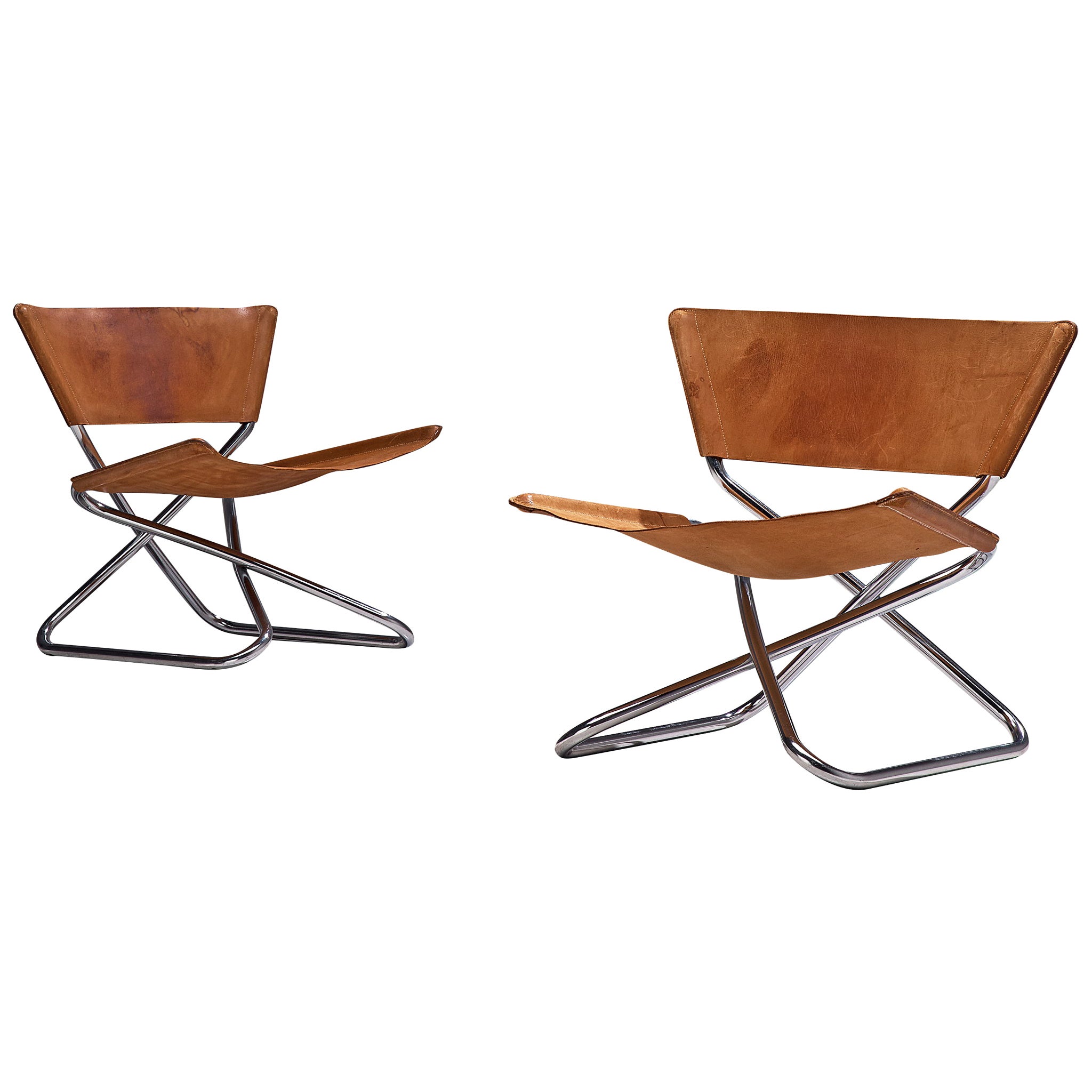 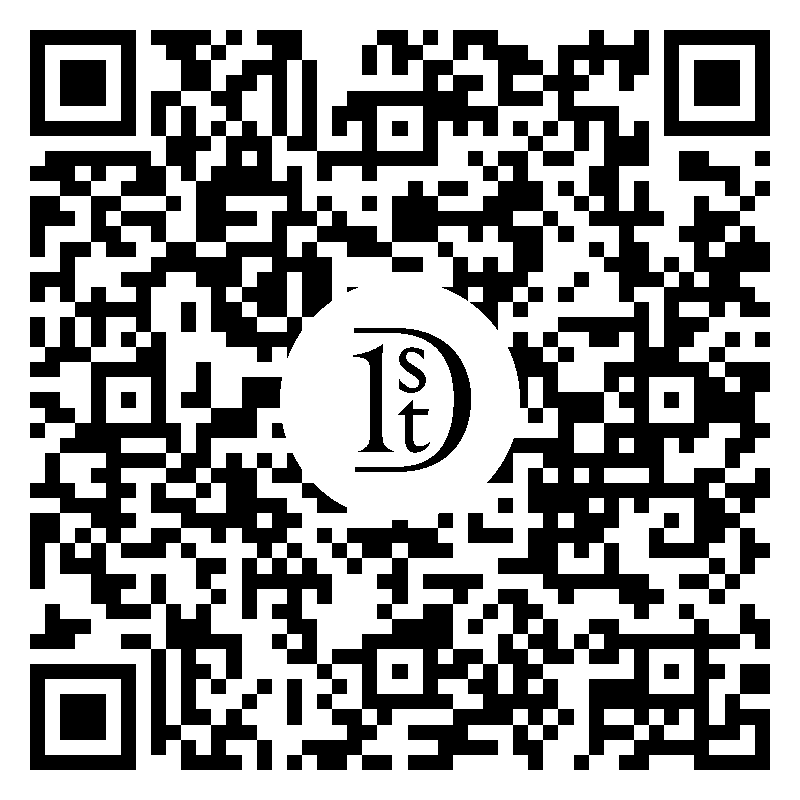 Pierre Guariche for Airborne, set of two G1 lounge chairs, lacquered steel and black leather, design from 1953. This wonderful set of G1 lounge chairs are designed by Pierre Guariche in 1953 for Airborne. The simplistic and modern design consist of a tubular steel frame with a seating of black leather. The shell, resting on the thin metal frame, forms a Classic, modern combination. The leather is in overall good condition, with some traces of use and age. Pierre Guariche (1926-1995) was a French architect, designer and decorator. Guariche was a student of Reneé Gabriel, which is clear in his use of bold, sharp forms and shapes. In 1951 he was noted by the new company Airborne for whom he designer complete household furnishings. As many designers who are trained as architects, he saw himself primarily as someone who dealt with space and construction. This is visible in his functional, well-structured furniture. Literature: - Favadin, Patrick, Les décorateurs des années 50, éd. Norma, Paris, 2002, p. 212. VAT within the EU: When buying or delivering an item within the EU, VAT usually applies and will be added.

The architect Pierre Guariche (1926–95) was one of the leading modern furniture and lighting designers of postwar France. Guariche can, in some ways, be thought of as the French version of Charles Eames: with his lean and angular chairs and slender, sculptural lamps, he helped introduce a new aesthetic to the country’s interiors — and he was an eager pioneer in the use of new industrial materials and production techniques that emerged in the 1950s.

Guariche studied at the École Nationale Supérieure des Arts Décoratifs in Paris (the national design academy) under René Gabriel — a designer, known for his quality, mass-produced furnishings, who served as a director of the postwar Ministry of Reconstruction. Two years after graduating in 1949, Guariche opened his own design firm, and he was soon creating pieces for numerous companies, including the lighting manufacturer Disderot.

Always on the lookout for new materials, Guariche spent several years in the mid-1950s operating a firm making furniture in fiberglass and other plastics, along with Joseph André Motte and others. After 1957 — when Guariche was named head of design for the Belgian company Meurop and given a brief to create stylish, up-to-date chairs and cabinets — he began to look to America for ideas. In the mid-1960s, he produced several lines of deeply upholstered, rounded lounge chairs inspired by the space-age look, and gave them names like Jupiter, Polaris, and Luna. While Guariche always kept pace with his times, throughout his career he showed a consistent talent for producing elegant, eye-catching forms using a minimum of materials.

Recognized Seller
These prestigious sellers are industry leaders and represent the highest echelon for item quality and design.
Diamond Seller
These expertly vetted sellers are 1stDibs' most experienced sellers and are rated highest by our customers.
Established in 2006
1stDibs seller since 2012
3,202 sales on 1stDibs
Typical response time: 1 hour
Associations
20th Century Specialists
More From This Seller
View All From Seller

$2,800 / set
Pair of Lounge Chairs, Black Leather Chrome, Attributed to Thonet, 1970
By Thonet
Located in Graz, AT
A set of two leather and chrome or nickel lounge chairs attributed to Thonet, Austria, circa 1970 (late 1960s or early 1970s). They are made of a high quality and thick black leather...
Category

$2,900 / set
Pierre Jeanneret Stadium Lounge Chairs
By Pierre Jeanneret
Located in Toronto, Ontario
A pair or unique "Stadium" chairs by Pierre Jeanneret for the Chandigarh Project, circa 1956. These chairs are 2 of only 3 known (I have the other single if needed). They were cre...
Category