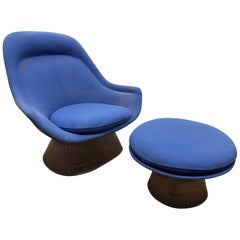 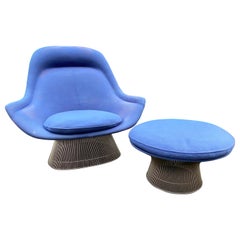 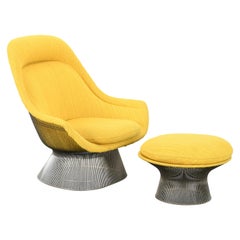 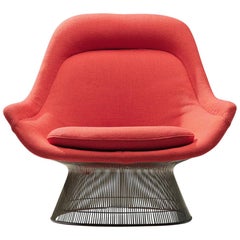 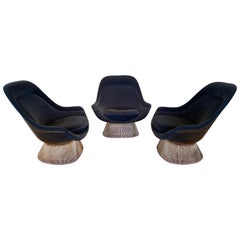 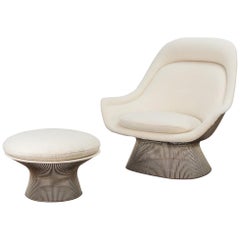 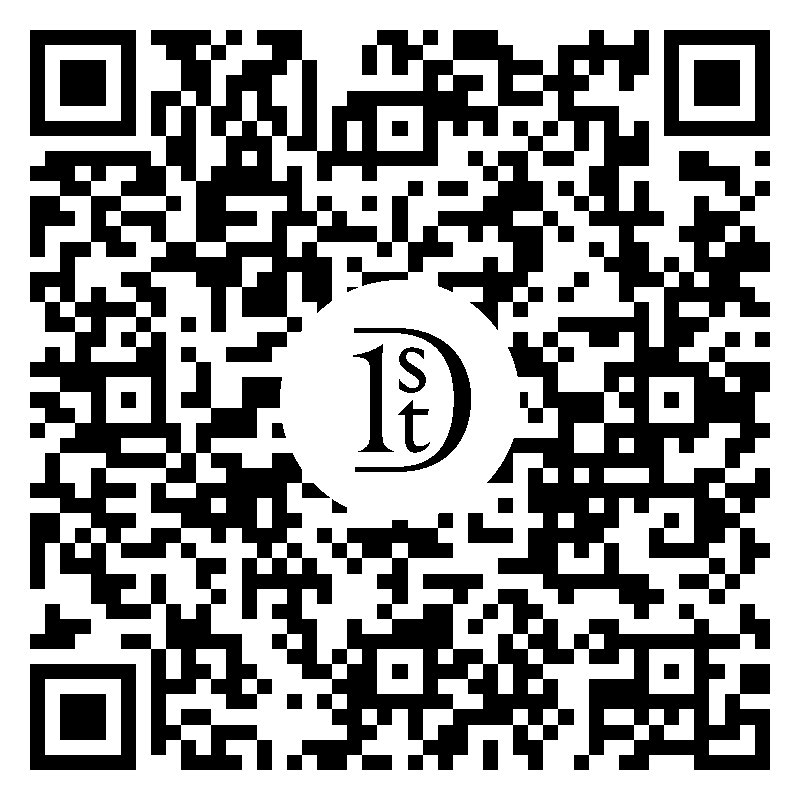 Warren Platner for Knoll, easy chair 'model 1705' and ottoman, steel and beige fabric, United States, design 1966, production later. This iconic easy chair by Warren Platner is created by welding curved steel rods to circular and semi-circular frames, simultaneously serving as structure and ornament. It was Platner who suggested to make a range of furniture for Knoll that made use of this bent steel as a material. The process to develop this line was however difficult as it took a long time to develop the technical necessities to align the large number of wires. In the beginning the opinion on the new Platner-Knoll line was divided as some critics thought the decorative nature of the designs was to prominent. However, over time, it was proven that the design of this range was a technical, visual and a critical success. It is interesting to point out that this set is very different from the other famous bent steel furniture range of Bertoia. Platner's range began with a sense of need for 'decorative, gentle, graceful' designs comparable to those of the time of Louis XV, but having a more rational base. Bertoia's range on the other hand was much more conceptual and was focused on the strength of space division. Warren Platner (1919-2006) was originally trained as an architect a studied at Cornell University. Although Platner made notable architectural contributions throughout his career it was his furniture collection for Knoll that earned Platner worldwide renown. Originally introduced by Knoll in 1966, the Platner collection is an icon of modern furniture. In his early years Platner worked for the architect Eero Saarinen. Platner is famous for his refined and theatrical designs and he did not shy away for color. Knoll International was founded in New York by the 26 year old German Hans Knoll (1914-1955) in 1938. Hans' father, Walter Knoll was a true modernist and furniture manufacturer who had a reputation for quality. When Hans Knoll died at a young age his wife Florence Knoll took over and under her influence the company flourished and created its best designs. She designed and led the company where she cooperated with talented designers such as Eero Saarinen, Ludwig Mies van der Rohe, Richard Schultz and Harry Bertoia. Measurements ottoman: D 65 x W 65 x H 35 cm Literature: - Lutz, Brain. Knoll. A modernist universe. New York: Rizolli, 2010, p. 166 - 167. - Larrabee, Eric and Massimo Vignelli. Knoll Design. New York: Harry N. Abrams, Inc. Publishers, 1981, 160 - 161.


The company was formed in 1938 by the German immigrant Hans Knoll. He first worked with his fellow ex-pat, the Danish designer Jens Risom, who created furniture with flowing lines made of wood. While Risom served in World War II, in 1943 Knoll met his future wife, Florence Schust. She had studied and worked with eminent emigré leaders of the Bauhaus, including Mies, Walter Gropius and Marcel Breuer. She won Knoll over with Bauhaus notions of industrial arts, and an aesthetic that featured flat and tubular metal frames and angular forms. When Hans died in a car crash in 1955, Florence Knoll was appointed head of the company. It was as much through her holistic approach to design—a core division of the firm was dedicated to planning office systems—as Knoll furnishings themselves that she brought about the sleek and efficient transformation of the American workplace.


Today, classic Knoll furnishings remain staples of modern design collections and decors. A history of modern design is written in pieces such as Mies’ elegant Barcelona Chair, Saarinen’s pedestal Tulip chair, Breuer’s tubular steel Wassily chair and the grid-patterned Diamond chair by Harry Bertoia. As you can see from the items on the following pages, these designs and others have become timeless emblems of the progressive spirit and sleek sophistication of the best of Modernism.

Our team of world-class specialists approve every seller on 1stDibs.
This distinction is for experienced sellers who continually surpass customer expectations.
This designation is for sellers whose items consistently exemplify the best of 1stDibs.
This seller is a vetted member of professional associations.
1stDibs seller since 2012
Typical response time: 1 hour
Located in Waalwijk, NL